As above, monitoring needs to be off. The output should be the signal from the computer and not any kind of mix.
J

There was no mic connected and I was sending the signal from othe output back to an input as stated in the calibration instructions.

You don't need to install Java. If the REW installer cannot fiund a suitable Java runtime it will download a private runtime that only REW uses, exactly the same as the previous "with JRE" versions. The only difference is not including the runtime in the download to save bandwidth when it is not needed.
T

John Mulcahy said:
It really should not be necessary to delete preferences for a new version and I don't recommend you do that.
Click to expand...

For a long time, I would not delete anything REW beta xxx installed. Around this spring one of the betas did something that other betas were not clearing after updating. (Often a measurement would not "hear" the chirp at the start of a sweep, it would wait endlessly for the thing it never heard, really quite frustrating.) Searched up REW uninstaller app for my MacBook Pro, and used it. And the sound whacky disappeared. I took a screen shot of my prefs for REW and reconstruct from prefs screensnap after a new update In removing all the software I can choose to name the enclosing folder in my Applications folder for each beta version. REW-b25, kind of thing. I have had MUCH better luck with betas since...
H

Just a small detail regarding the Info window.. (Beta 24)

When playing from file (in Measure Playback From File), Excitation in the Info window shows whatever Level was set before when Playback was set to From REW which may or may not be the same as in the generated sweep file.

hibikijin said:
When playing from file (in Measure Playback From File), Excitation in the Info window shows whatever Level was set before when Playback was set to From REW which may or may not be the same as in the generated sweep file.
Click to expand...

Thanks, I've fixed that.
W

My first post.
With latest REW beta (and the previous as well) when I click on the "Controls" button I cannot see the whole menu on screens with lower resolution (old Mac laptop). On better monitors all items in the menu fit fine in the frame. My question: Is it possible to add scrollbar in some of the next releases? Otherwise, excellent software and saves me a lot of the guess work by ear.

There are a few things that can be done to reduce the space used on a lower resolution screen: To make more horizontal space for the graph use the expand/collapse button above the measurement panels to reduce the width they take up and turn off the graph scroll bars using the button above the graph (the graph can be moved by right click and drag). To make more vertical space you can remove the labels under the toolbar and graph buttons by unchecking boxes in the View preferences and you can remove the toolbar by unchecking the Show toolbar box in the View preferences (everything in the toolbar has a corresponding menu entry and a keyboard shortcut).

If those don't work let me know the Mac's screen resolution and which menus cause problems.
J

I've used REW, but I've installed a few new releases without using them. I'm now at version version 5.20 Beta 24, i use it on MacOS 10.14.6. I've used it today to update some documentation of a DIY speaker project. And I have found some issues with it.
If I used the Generate 1/A or 1/B it works the first and perhaps second time, but soon the Generate button stays greyed out and nothing is generated.
When using the capture button after using REW for .while, only first dialog pops up. After pressing the save button with the floppy logo, no dialog pops up to select the directory and file name. Thus essentially the capture can not be saved. Only when starting up REW freshly and make directly the capture first, then the second dialog pops up and the capture can be save. For the next capture you have to quit REW, start it up again and do the next capture, which is very annoying.
I uninstalled REW and reinstalled it freshly, but have the same problem.
Further I noticed, that at some moment the save all did not function. After pressing the button in the toolbar, the dialog for selecting the file name and directory does not pop up. It looks similar to the capture problem
I know that the 1/A function is rather new, but the version before that I've used without issues. So I no not know when the issues has creeped in, but it is rather recent.
The content of the log file for the generate issue was:
Sep 25, 2019 11:02:55 PM roomeqwizard.RoomEQ_Wizard main
INFO: REW V5.20 Beta 24 running JRE 1.8.0_202 64-bit on OS X 10.14.6, en, UTF-8
java.lang.NullPointerException
at java.util.Arrays.fill(Arrays.java:3092)
at roomeqwizard._G.A(y:1301)
at roomeqwizard._G.doInBackground(y:1847)
at javax.swing.SwingWorker$1.call(SwingWorker.java:295)
at java.util.concurrent.FutureTask.run(FutureTask.java:266)
at javax.swing.SwingWorker.run(SwingWorker.java:334)
at java.util.concurrent.ThreadPoolExecutor.runWorker(ThreadPoolExecutor.java:1149)
at java.util.concurrent.ThreadPoolExecutor$Worker.run(ThreadPoolExecutor.java:624)
at java.lang.Thread.run(Thread.java:748)

For the 1/A problem I'm guessing the trace you were inverting only had magnitude data, I've fixed that for the next build.

There must be some trigger other than time for the file dialog failing to appear, I've generated and saved measurements and captures many dozens of times and not been able to reproduce that. If you have any idea of something you were doing or that was happening before the dialog stopped appearing I'd be pleased to hear it.
J

I've restarted my mac and will try again. If there is a reproduction scenaria, I will make a screen recording.

Thanks. If it happens again can also try unchecking the box to use the macOS file dialog in the View preferences, maybe the Java file dialog will still work.
J

After a restart of my laptop, I did not have seen any issue with a missing file dialog. So some strange interaction of macOS with java I guess.

Thanks for this update John.

I just have the following suggestions for your consideration, when working with the waterfall graph 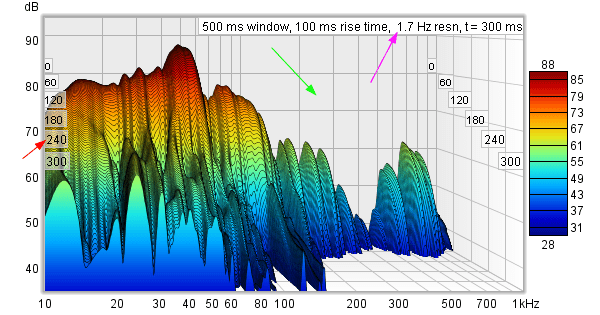 I have added options in the next build to show or hide the time axis labels, settings label and colour bar. I have also amended the limits for the cubehelix colour scheme settings to allow min grey and max grey to both be set to 1.0, which will produce a white, unshaded colour scheme. I haven't put in a way to disable the depth shading on the walls and back of the plot, there isn't a convenient place for another control and it looks bad. Here is an example using the new options.

John Mulcahy said:
I have added options in the next build to show or hide the time axis labels, settings label and colour bar. I have also amended the limits for the cubehelix colour scheme settings to allow min grey and max grey to both be set to 1.0, which will produce a white, unshaded colour scheme. I haven't put in a way to disable the depth shading on the walls and back of the plot, there isn't a convenient place for another control and it looks bad. Here is an example using the new options.

Thank you so much John.

While it is now easier to tell what is what, I feel the dashed phase response can look a bit odd sometimes; have a look at the attached screenshot for instance, the phase curve is now hardly readable. One may prefer to use the same colours for the SPL and phase curves for whatever reason. As in the screenshot, I may want to use pink for SPL curve and blue for the phase curve as an example,; currently, altering the SPL curve colour also changes the colour of the phase curve automatically in ways that a user does not have control over.

The idea behind the original request was more along the lines of having an ability to independently change the colours of either the SPL or the phase curves. This is because at the time, the colours were too closely matched making the reading or interpretation of the graphs a tad hard at times. Seeing that you have now made these changes, I should think an option to toggle between the dashed or solid curves will aid usability. The first price however and if at all possible, is still independent control of each curve colours, especially in the context of SPL and phase being drawn on the same screen.

Thank you for great support on this very useful tool. 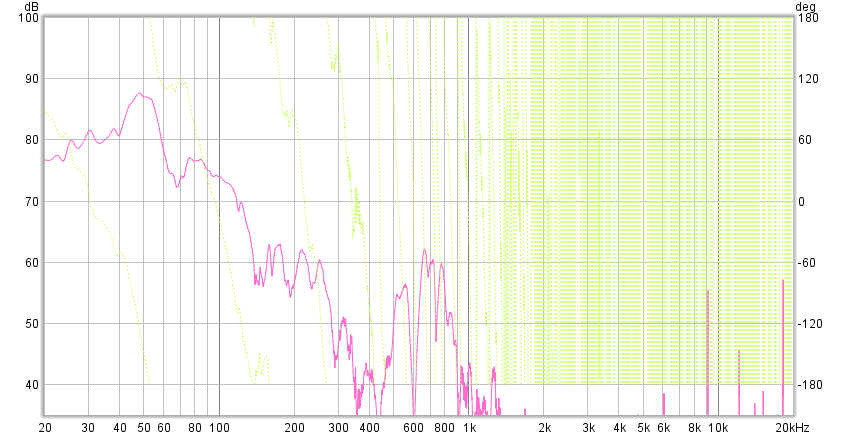 I can ensure the phase trace isn't too light for the background, I already ensure it isn't too dark for the dark background. Separate control of the phase trace colour is awkward, currently only the measurement itself has a configurable colour and that colour is used wherever a trace from the measurement appears. There isn't a mechanism for defining individual trace colours on a plot and I don't want to spend time adding one while there are so many other things on the todo list.
You must log in or register to reply here.
Share:
Facebook Twitter Reddit Pinterest Tumblr WhatsApp Email Link