Today the wood pieces for the prototype were cut...tomorrow the portholes will be cut, and some pieces will be glued. We are still waiting on the veneer so all cannot be glued until the pieces we are veneering are veneered. Piece will be vacuum veneered. Once we have one veneered, I will start bringing them home (as they are completed), and start to assemble.
Last edited: Feb 14, 2020

Update... we have all the port holes cut in all 4 horns. We have one prototype all setup and ready to glue, after we make 3 more duplicates of the cut MDF. Today I received 6 sheets of veneer, and next week hopefully we will have the glue in so we can veneer the fronts of each speaker, and then veneer one cabinet assembly. Once I have a sample of each in the house we can start installing the drivers, and tuning the individual speakers to see which one I like the most.

Progress pics... All 4 horns have been drilled for the woofer port slots, and we have a stack of MDF to assemble the 1 1/2" thick motherboard for the horn to slide into. 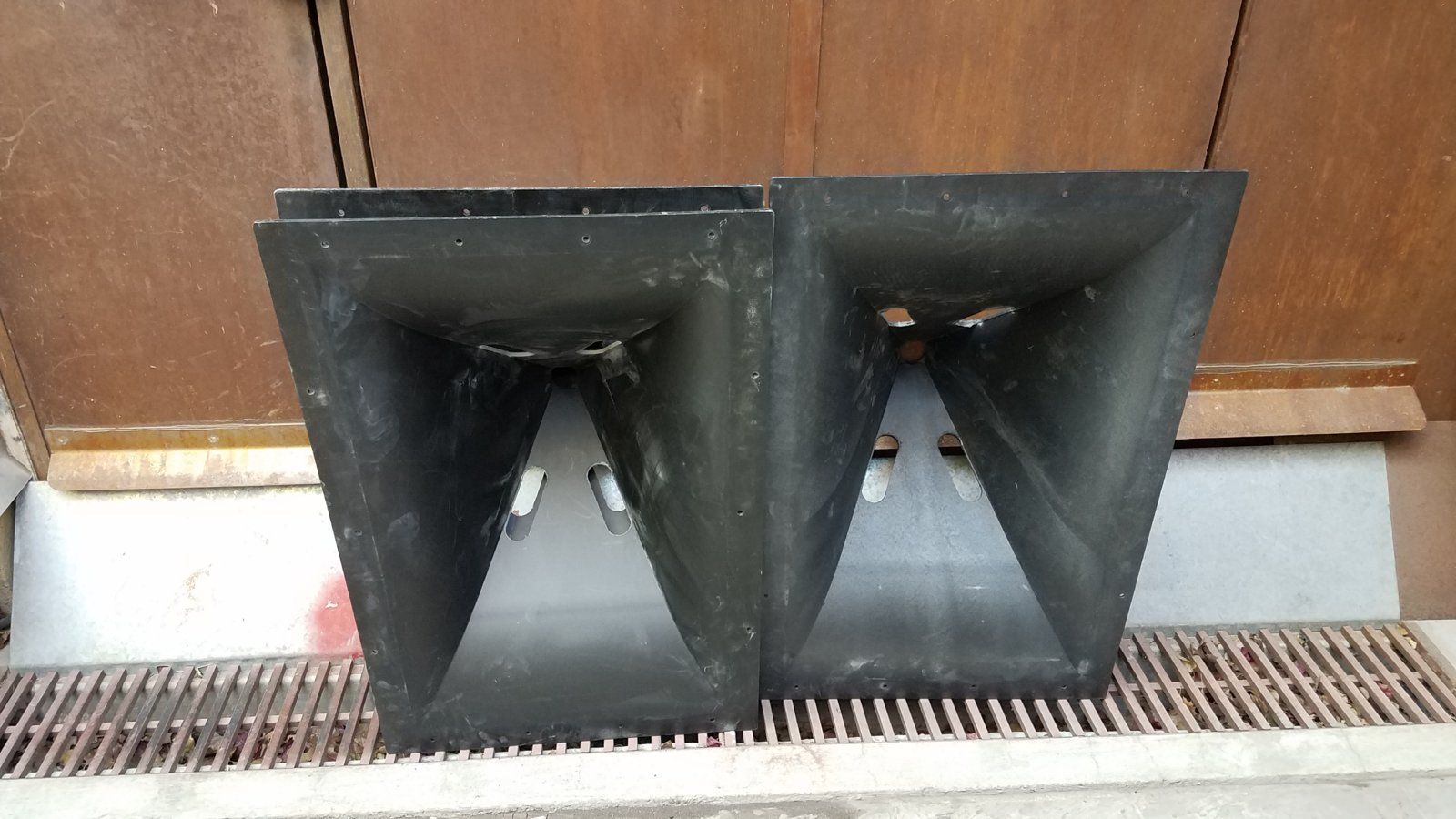 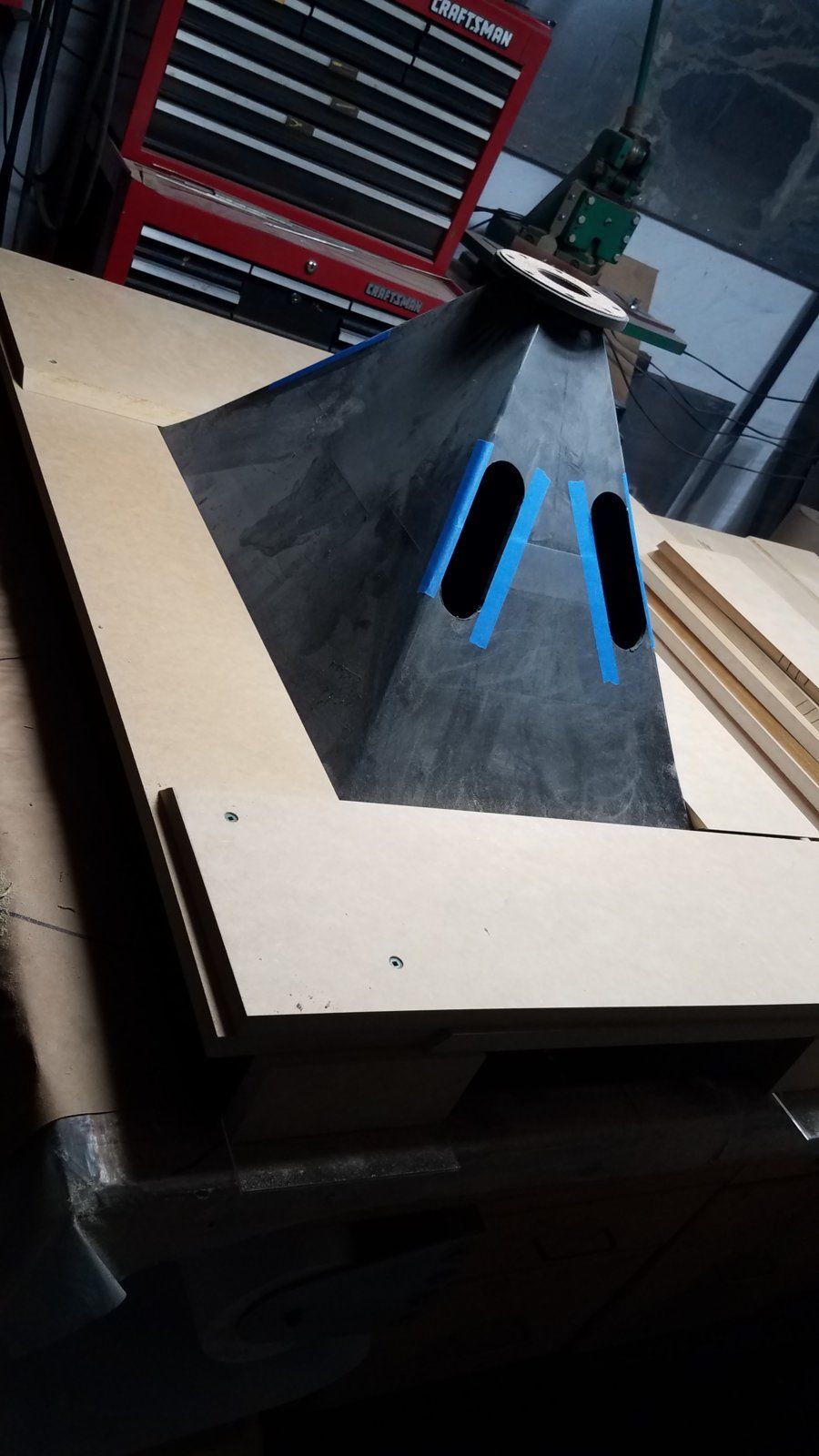 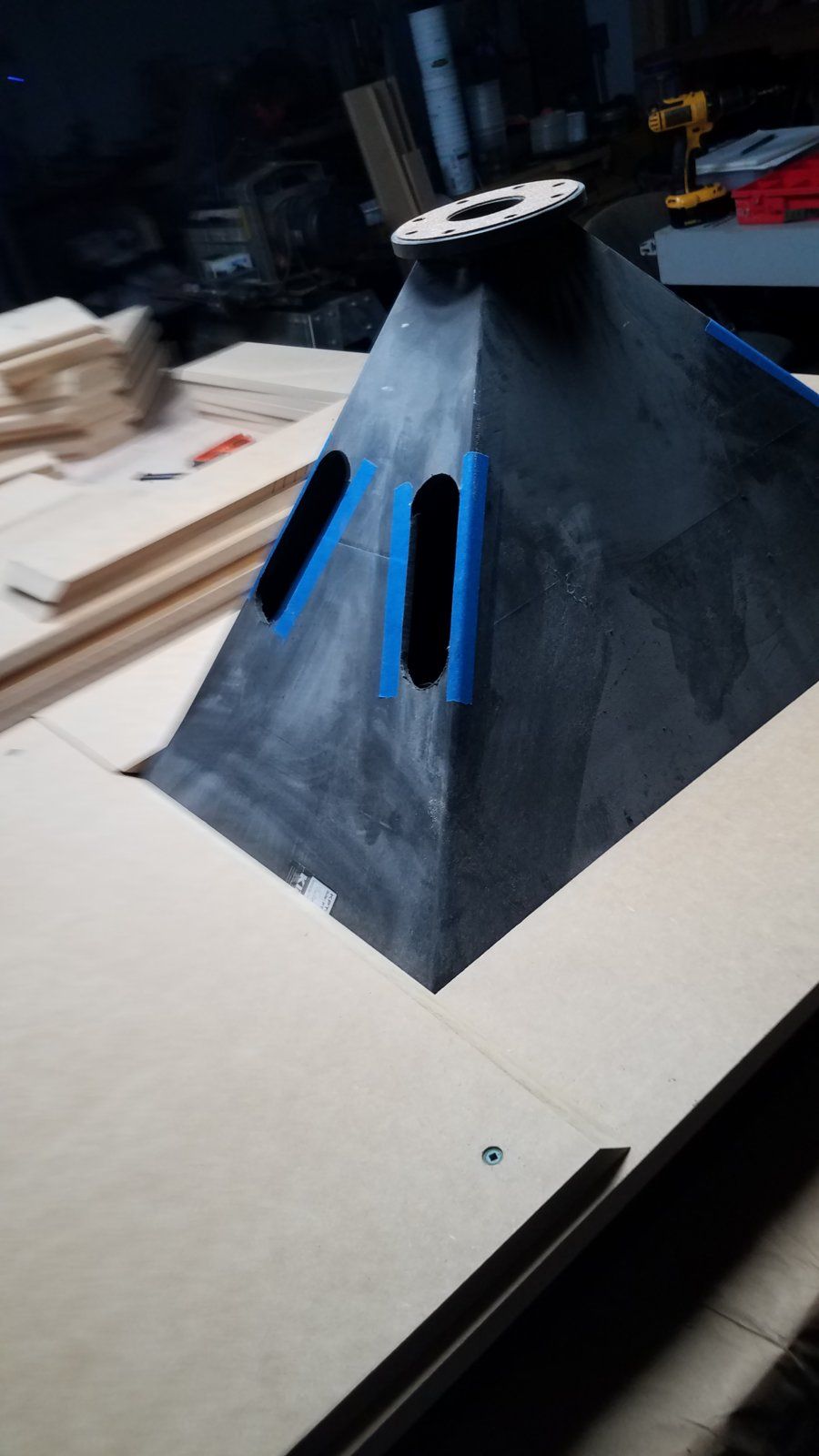 You’ve done this before, haven’t you! Over my head, but still enjoy following along.

Last build we tried to make the horn and cabinet out of MDF.....all we did was set the crossover with no tweaks at all. We then compared it with a pair of LaScalas, and it was more revealing, in the mids and the bass was more extended but needed some tweaks. We were getting ready to move so I left the horn minus the woofers and drivers with a friend who in turn gave it to someone.

This time we are using authentic horns, and I will send the REW info to the designer of the horn, and he will tune it for me.
Last edited: Mar 11, 2020

Update: I just got off the phone with my neighbor...we decided to just bring the front panels over without the veneer for now. By doing this I can start to design and tryout what style cabinet works best for me. Once I do this, I can then take it back apart, and give him the pieces to veneer all at once (in pieces instead of as one piece). Who knows...it might sound great without a box. I also can take the box I brought my horn to Mexico, and just insert the 1 horn I have as a spare to compare to the no box version.

Pic are posted in the 2 Way Synergy build of what I have done as of today. Tomorrow I will work on the support backbone if I can... if not I will work on assembling the 2nd one.

A little update...
My center channel speaker should have its cabinet veneered, and sprayed tomorrow. I will assemble it again, and rewire it as soon as I get it home...it will be complete except for the copper 4x4 plate that I still need to get engraved. I will be wiring the center channel up one last time with Speakon connectors too.If I like the way the cabinet version sounds better than the OB version, I will have the left and right channel. Oxes made, and veneered too.

I will post up pics as soon as I have the center up and running...after I get the new amp, and then I will start the tuning again.

Center channel is in place...still not tuned as a,cabinet speaker as I am waiting on the 3 channel amp to be completed. I am waiting for a couple of reasons...
1: The neew amp has no gain controls so all gain can be set with the Xilica.
2. The Nobsound amps it is turning out are not good with high efficiency horns when they start to get a lot of hours on them. I found this out when I reassembled the speaker with a cabinet. The center channel hiss is so bad you can hardly hear anything. I decided to hook up the p2500 for the center horn, and discovered the hiss is so low you must be standing directly in front of the horn at the horn mouth. I know people that swear by them, but I am not sure now... I even tried a spare one that was brand new and it was even worse. Strange thing is my Klipsch rp160ms are hiss free with the amps. 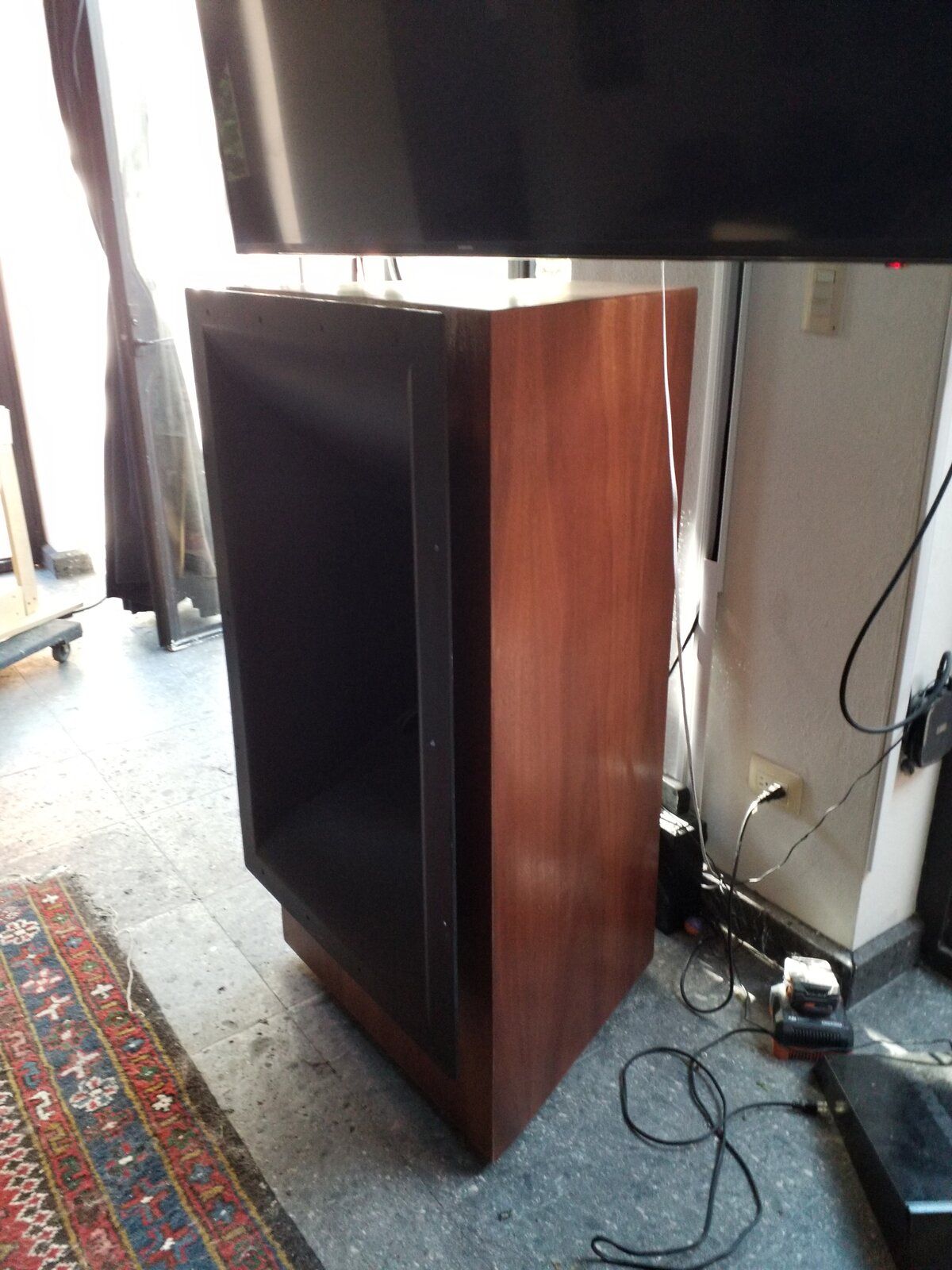 Front and rear panels of amp machined....waiting for some finishing touches and then I bring it home to wire up. Front panel has 3 power buttons (1 for each channel). The ljttle holes on each side are for individual amps on each channel.

On the bottom pic we have ... the XLRs on the top, speakons in the center, and the powercon connectors on the bottom.

The finish will be aluminum with a black case and the original black rack handles. 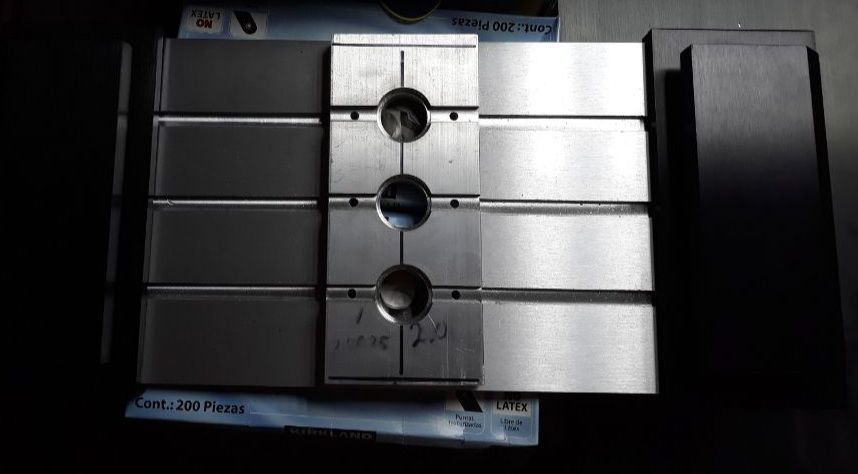 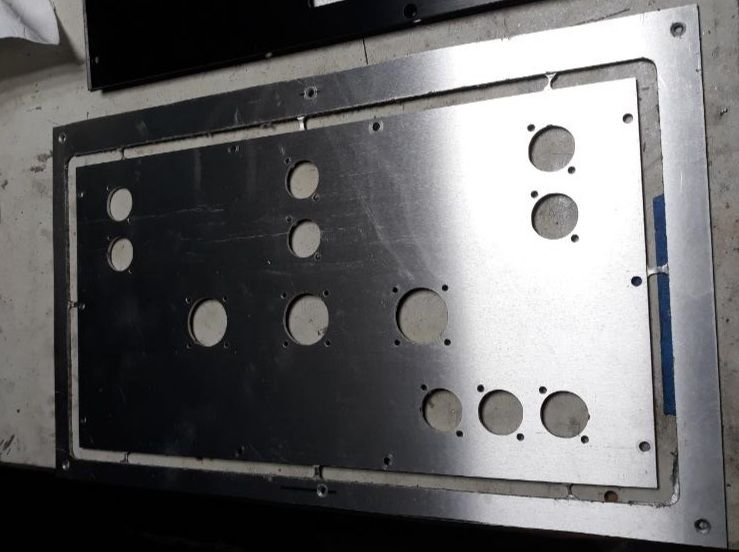 i am contemplating using the 1 channel that is done for the left or right and making a rectangular box (horn protuding out like the completed one) for the center...with it laying on its side. The horn top will be the same height as the center is now. I would have another box made that is 36" w x 18" tall x 24" deep (that the center channel would lay on top of)...it would match my current equipment rack, and hold the amp, crossover and APC power unit only.
By going this way I can clean up the wiring mess in the rack by only having 3 XLR cables going to the front center I then can run shorter cables to the center, left, and right speakers. It also will actually give a purpose for the balanced amps.

I have some extra compression drivers still, and I am going to try and copy the k402 synergy horn, but make all 4 sides the same size...this will reduce the size down to a 2' cube, and would be my surrounds

I should have 1 more cabinet version completed next week...if the new amp works properly I will then proceed on tuning. Once the new speaker arrives I am going to have the carpenter make me a 3' wide rack to match my original one. This rack will be for the center channel speaker to sit on and will also hold the DIY amp, crossover, and Furman.
I am hoping next week to get my bendable plywood too. I am going to try and make the square version of my K402MEHs out of bendable plywood, and MDF. If all goes good, I might make 3 of them for center, and surrounds. Wish me luck!

Amp is now home, and I am waiting on my screw type XLRs to arrive Friday...if all goes well I will have it up and running Monday.Wish me luck as this is the first time I have ever wired an amp up internally.

2nd k402 MEH just arrived from my carpenter, and I have to say his 2nd attempt at veneering is great! I will start to assemble it either Sunday or Monday. This one jas a 4" recess for a copper name plate... once I getnthe design approved, I will authorize the engraving. When it arrives I will post up a new pic of the rear with the plate installed. I will also be finishing the speaker grills next week. 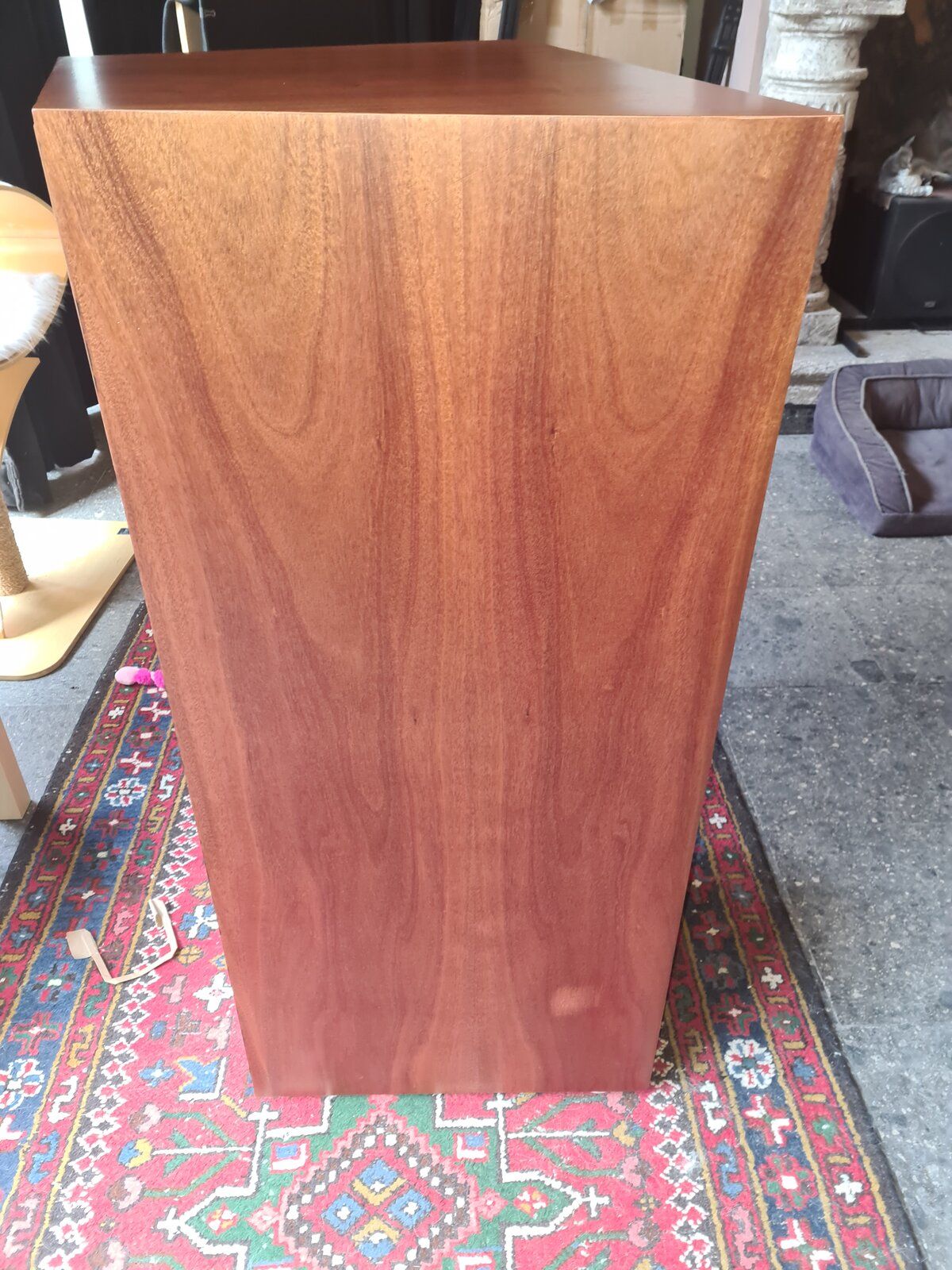 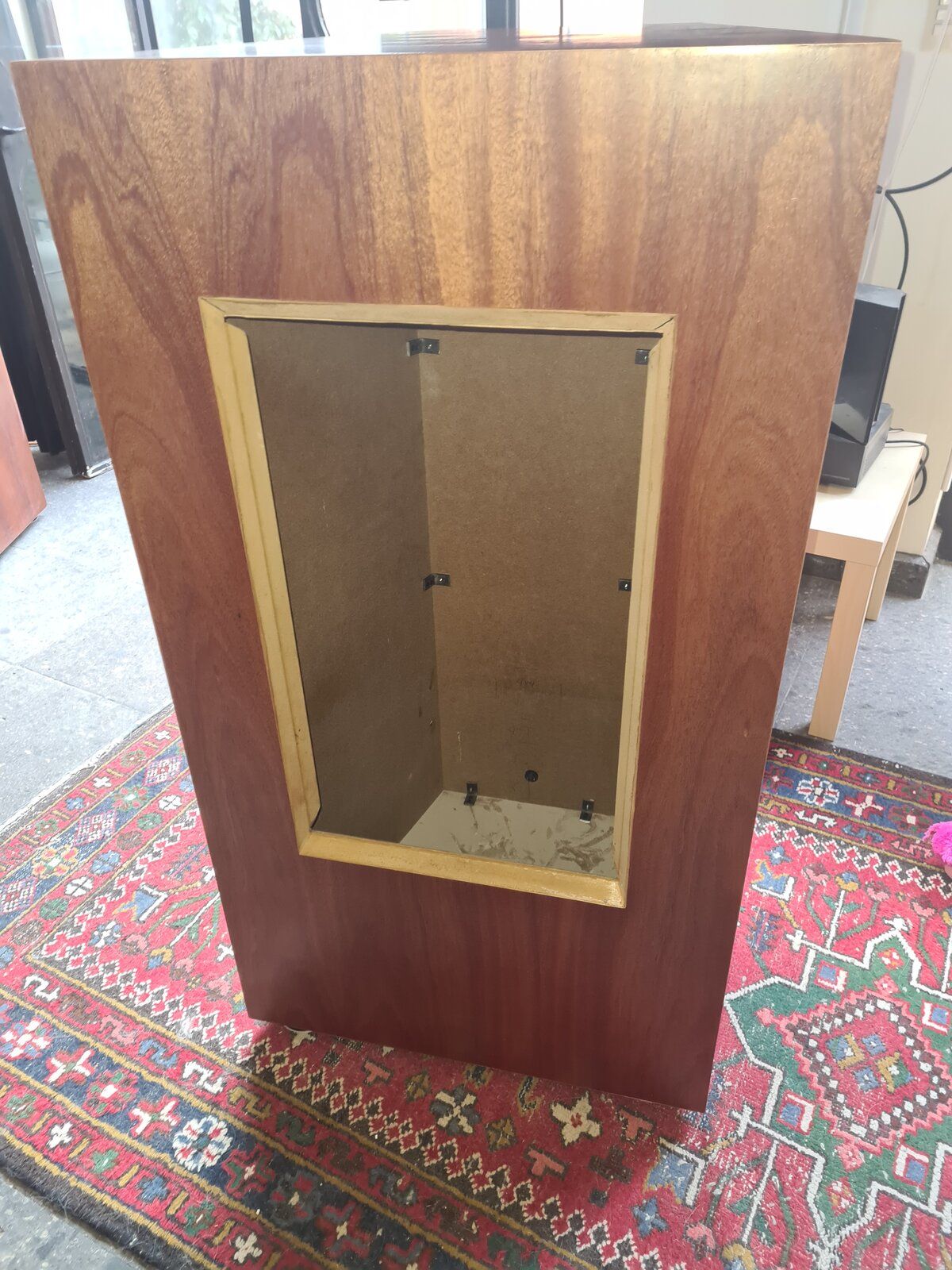 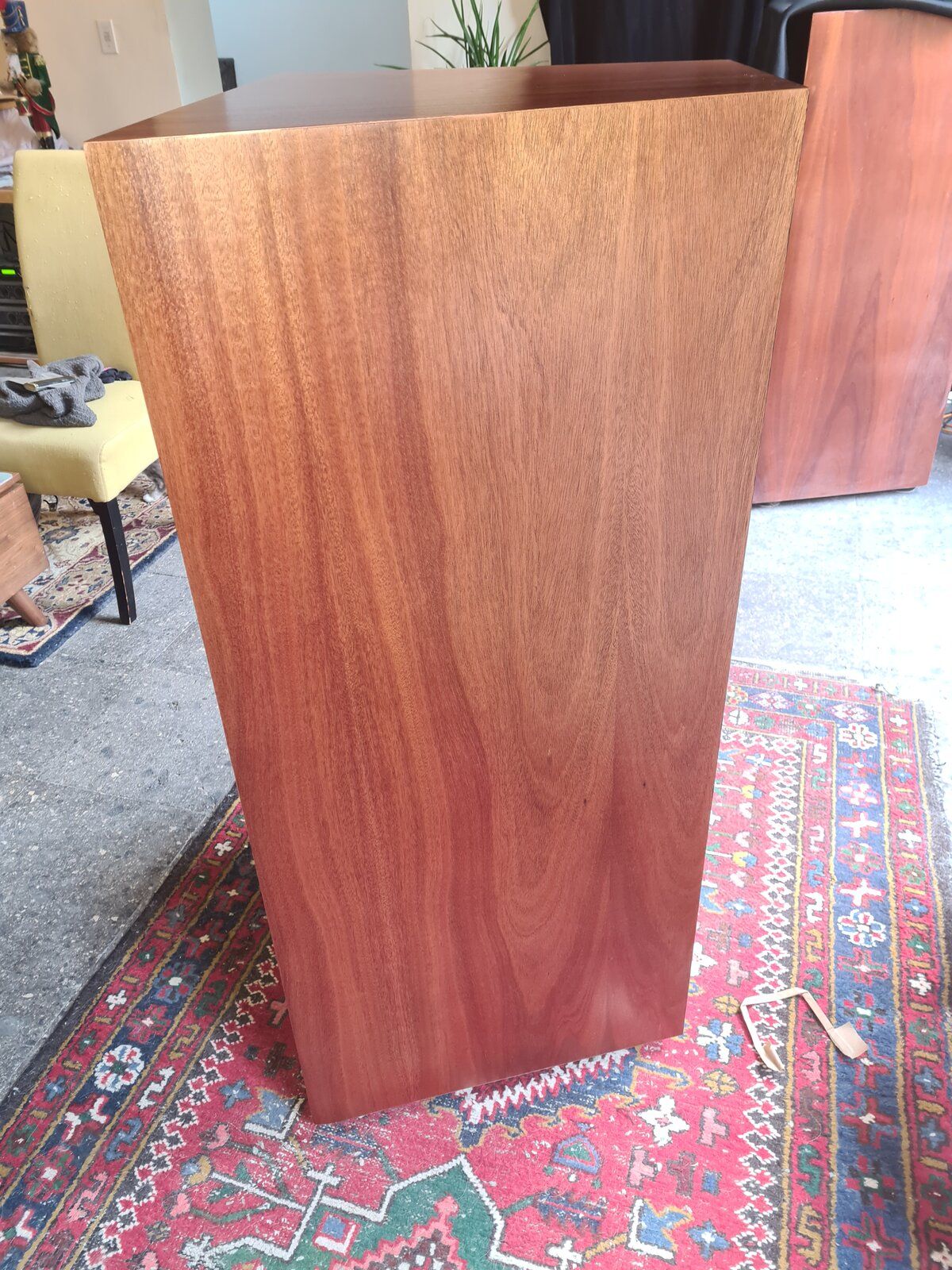 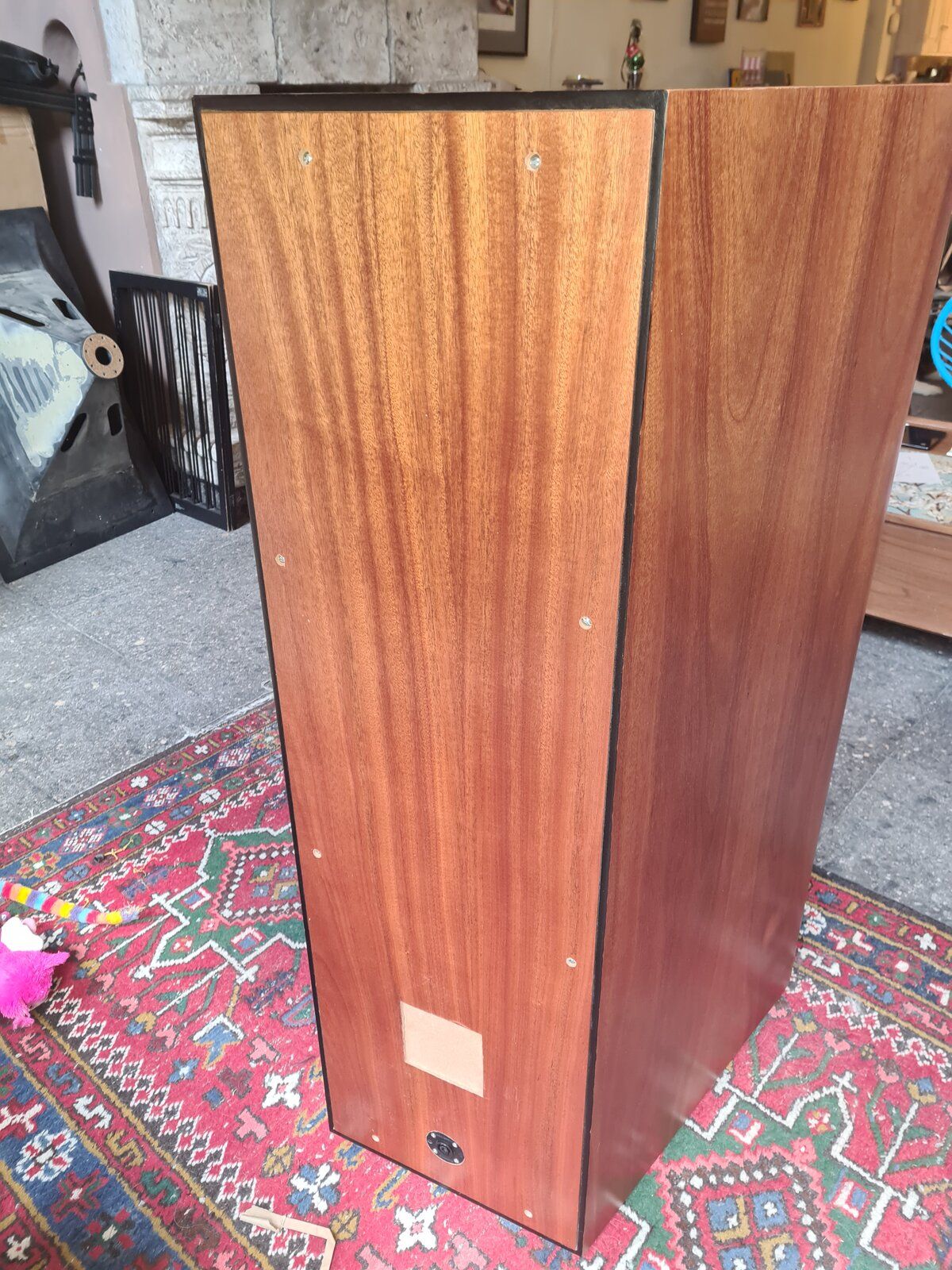 1st grill made...I will correct my error of not painting the magnets on the rest of the grills. Also you cannot see the ports in real life through the grill. 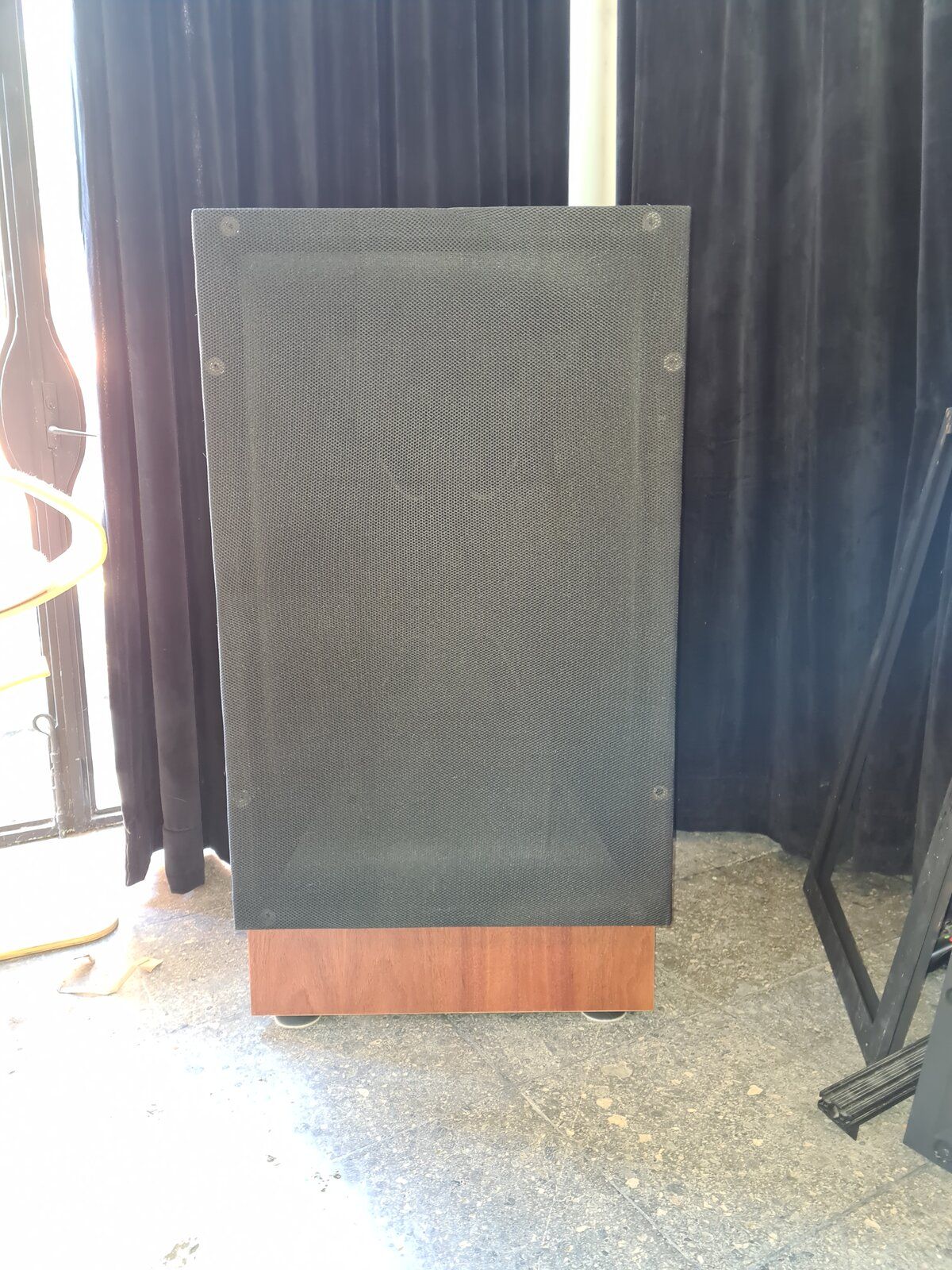 What material did you use on your grilles?

Are you going to paint the port walls or just leave them as they are. And is it better to post stuff here or the 2way Danley thread
Last edited: Oct 16, 2020

I used grill material that is a woven type of material (from Amazon as I recall), and appears to be very transparent. In the reviews I saw tnat a lot of people used double layers. I will paint tne ports, and the remaining grills will have the magnets painted too. I have been posting updates in all 3 threads, and respond in all.

2nd amp case arrived today. This time I opted to save money and not get the one without the handles, and save around $100, plus the front will just have one piece instead of the piece in the center to cover the hole. This amp will also have 6 asx125 amp modules, but each will be a stereo module. 4 of the amp modules will be for biamping the surrounds and the rear surrounds...I will also have 2 MiniDSP 2X4HD modules for the biamping (inside the case, but mounted to the rear of the case for the RCA jacks ).The remaining 2 modules will be for height channels.
The front of the case will have the same 3 power buttons, and grooves. The rear will have 1 power cord for all the amp modules, and 2 power cords for the MiniDSP crossovers, 6 Speakons, and 2 RCAs (for the heights). I do have some aluminum that could be cut to make rmatching rack handles too for the new amp, and I might be able to get some anodizing done locally too.. 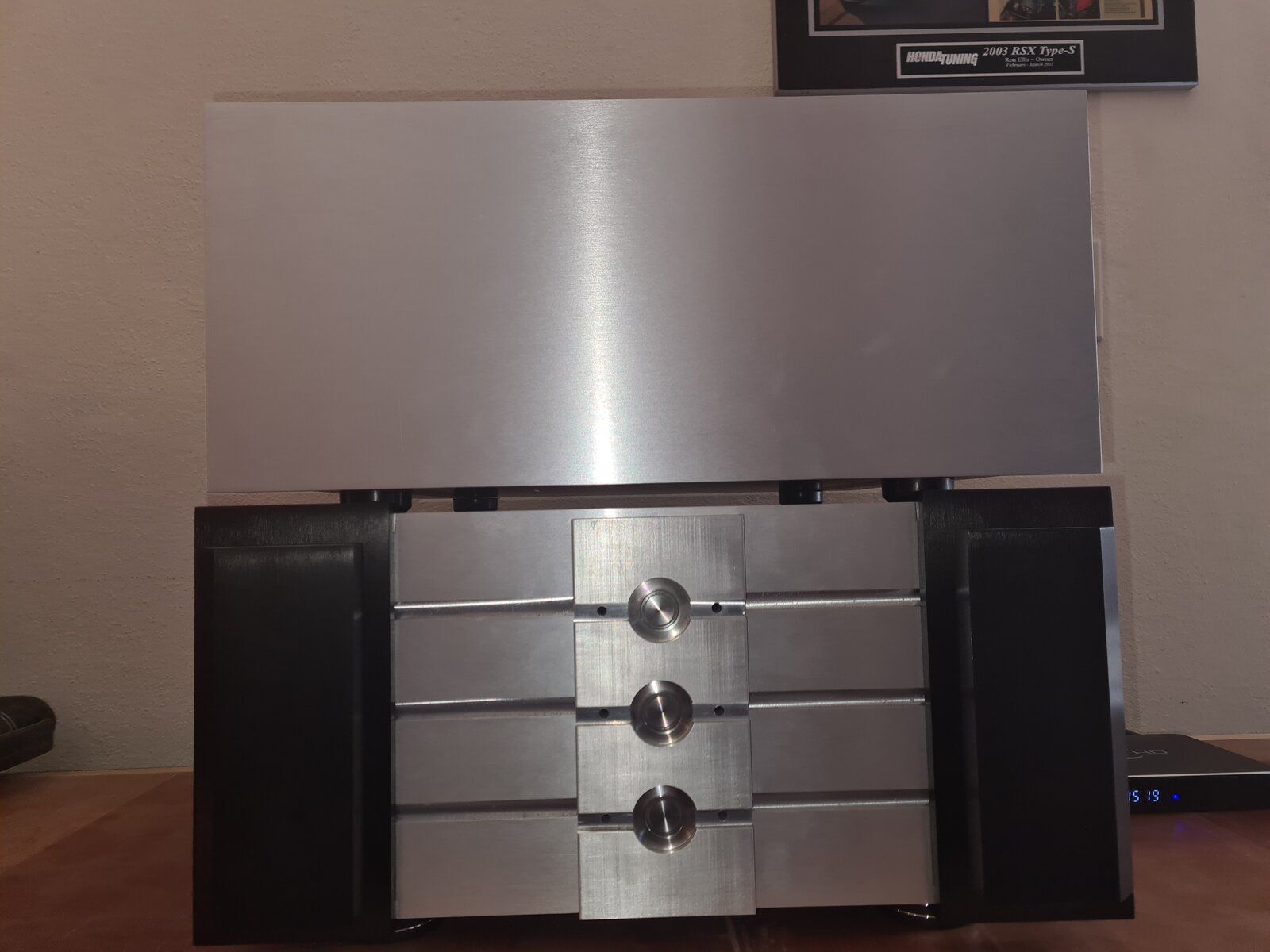 So here is a question...would it be as good to angle the front left and right channels upward like the new JBL Retro L100s, or would I also need to angle the center to match? How important is it to have the horn driver aligned with the ear height?
J

NBPK402 said:
So here is a question...would it be as good to angle the front left and right channels upward like the new JBL Retro L100s,
Click to expand...

Bummer. And I don’t know the right answer, but will you have a way to easily adjust the angle if you change the speaker to seating distance to keep them pointing to ear height? Or perhaps that’s not a possibility.

Have you ruled out building stands for the L & R?

I might try stands when the center channel arrives. I know i am def leaving the rack where I moved it as my wife loves where it is now.

Here is a pic of what i have been working on all day today...please excuse the mess. when the new center channel is done the tv will be raised up., and sit between the tv, and the rack. I will take another pic tomorrow when I get my speaker wires made, and there is light. 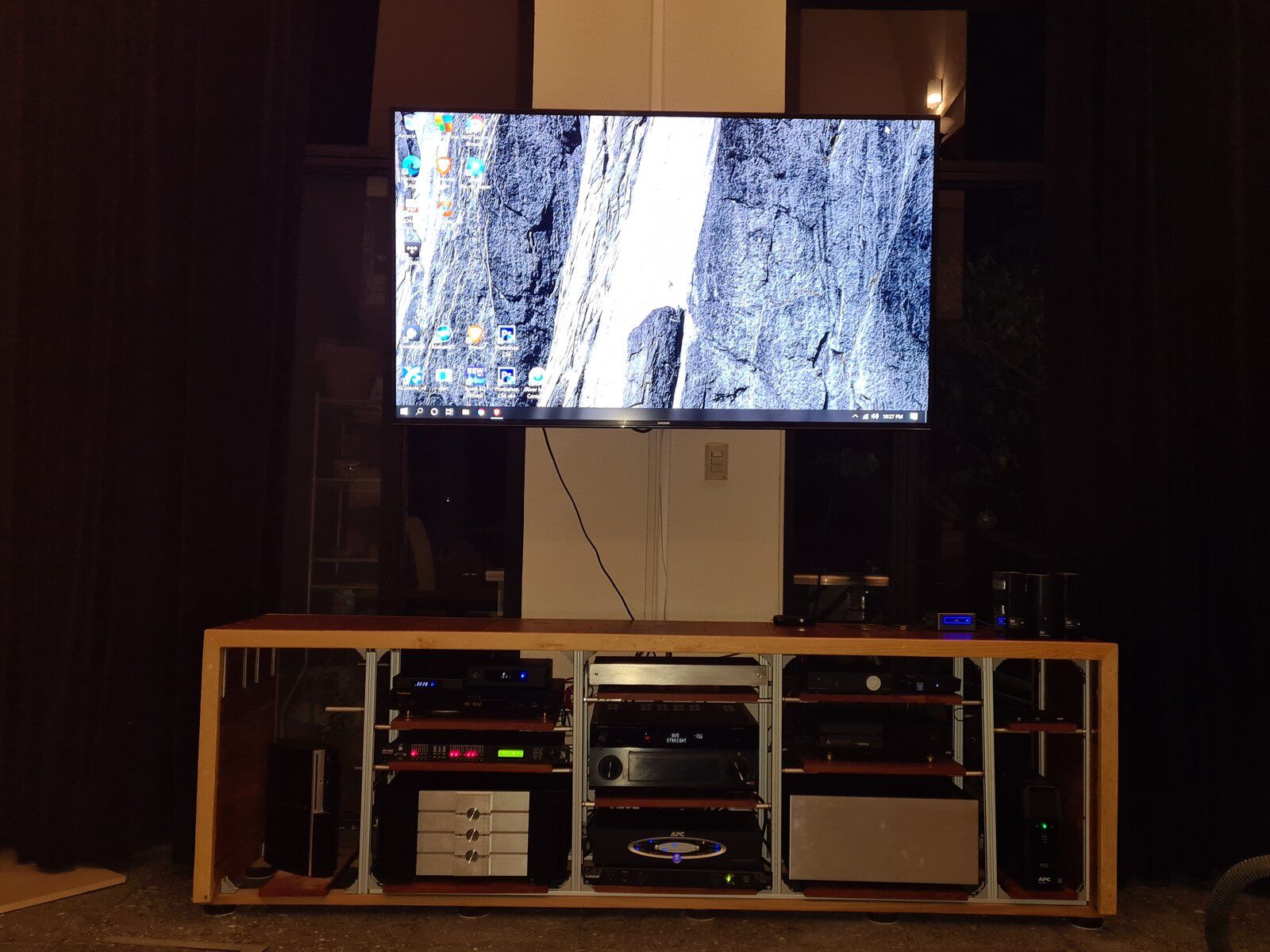 Thanks for sharing this project with us. You can color me impressed. Great work!

I have a 86" LG coming Monday. I also decided to do like others said and put casters on the rack...this will raise the cabinet 6", which will allow me to get better height for the tv, and hopefully have a good center channel still. The center channel k402 (on it's side) in the rack center, and I will put one stack of equipment on each side of the rack, and the remaining pieces behind the tv. I am also going to modify the rear supports on the rack, so I can lower the rear of the speaker (so it can aim at the mlp). I decided to do this because a 86" tv on top of the center would be 25" higher, and we just put our 65" on the rack instead of the wall...it looks much better.

Center channel arrived today. Pics are of it on one side...tomorrow I will start the assembly. This cabinet was made with 1" MDF (or maybe it is HDF).Th3 front piece is still 1 1/2" thick. The cabinet material was double the price of 34 ...hence why we do not know which material it is, and it is quite a bit heavier too. This cabinet was his best to date too. 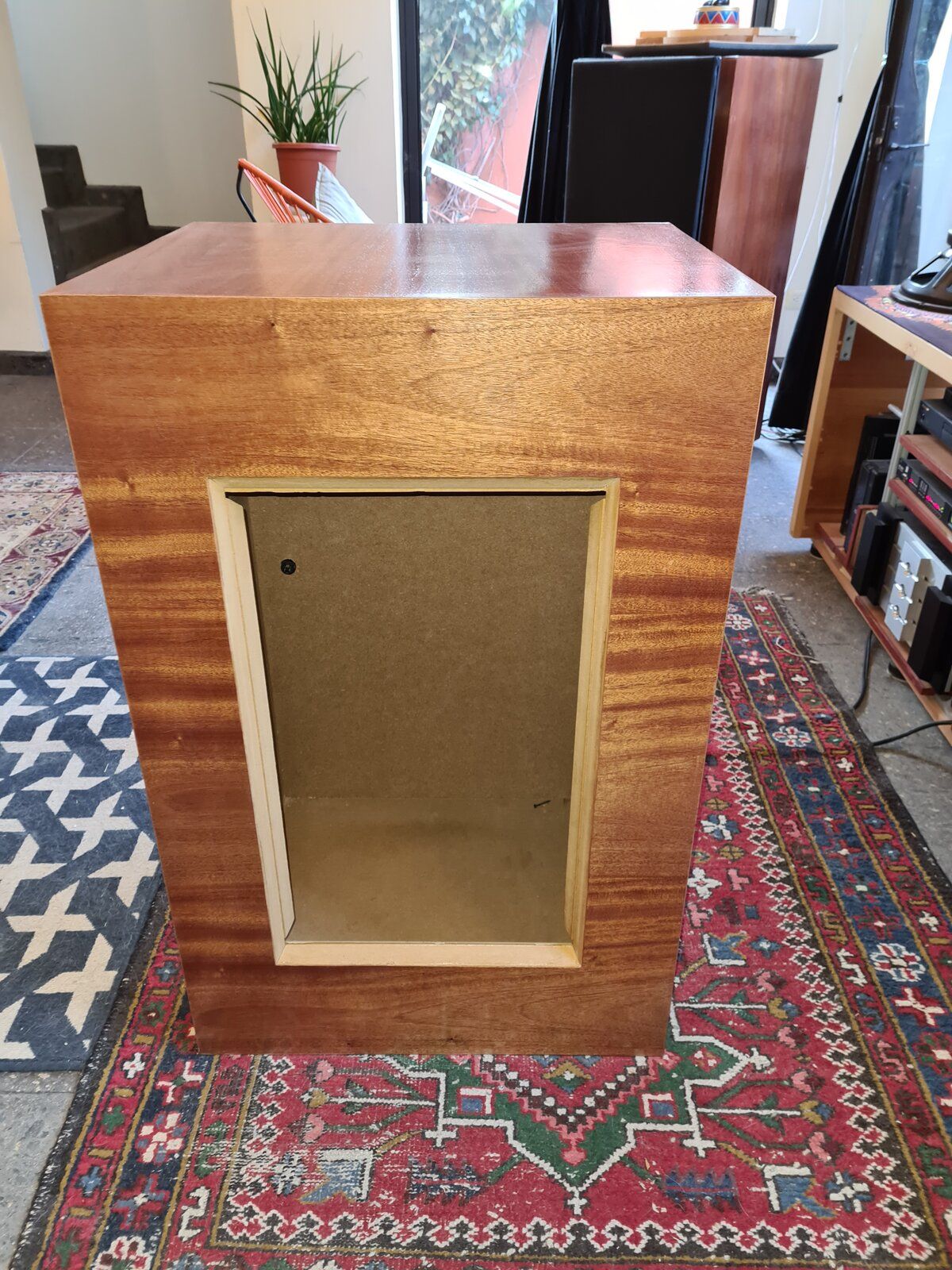 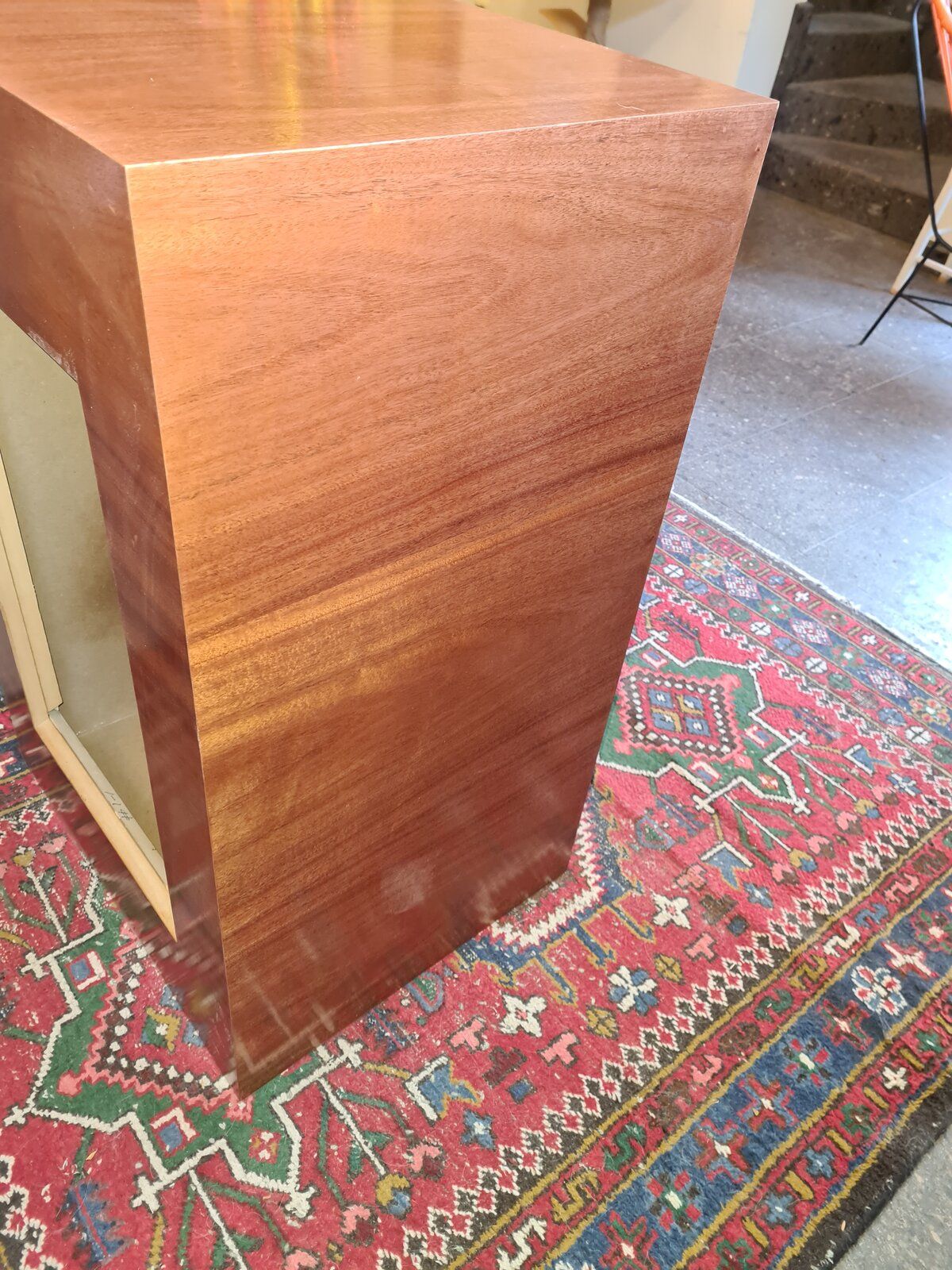 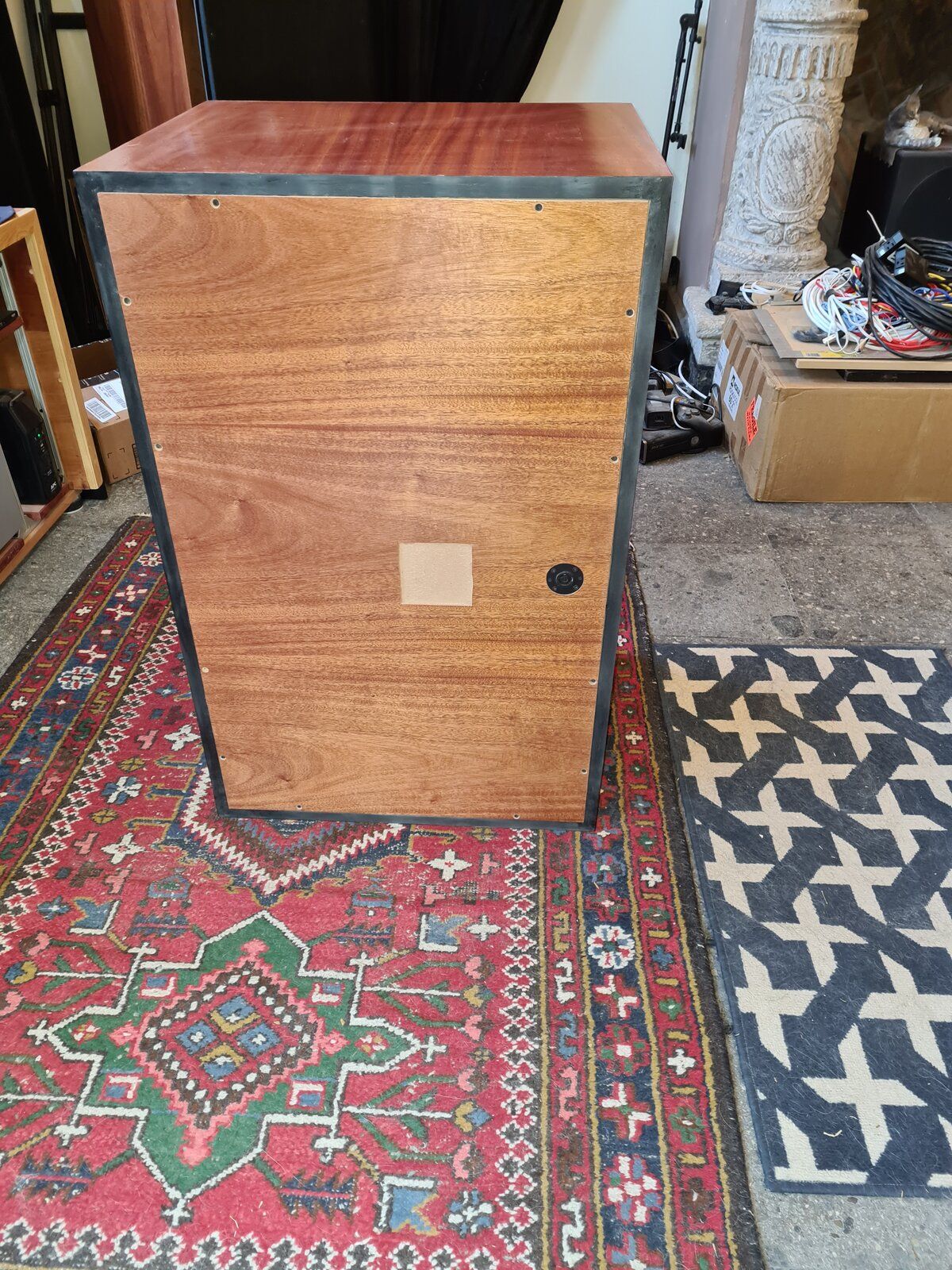