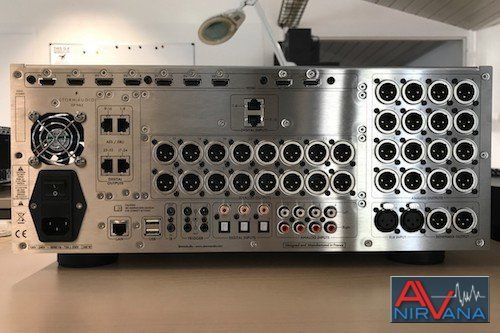 (September 6, 2019) What an incredible day in the world of elite audio. First, we pulled back the curtain on Polk Audio’s stunning Legend Series of speakers, and now we’re getting a first look at StormAudio’s ridiculously gorgeous 2020 processors and amps.

StormAudio has emerged as one of the industry’s most heralded immersive sound giants, and it's poised to take charge at CEDIA 2019 with four new processor models and 8- and 16-channel amplifiers. The entire gang of gear is branded as part of the Mark2 series and is expected to be available in early 2020. All four Mk2 processors carry the company’s newly released 7+2 eARC HDMI card which delivers improved switching, full HDMI 2.0b/HDCP 2.2 support, eARC, and more (click to learn more), in addition to support for DTS:X Pro, IMAX Enhanced, Dolby Atmos, and Auro-3D Version 2 immersive sound. Additionally, Dirac Live room correction with support for Dirac's new Bass Management Module is included.

Each processor possesses the ability to decode up to a whopping 24-channels, which translates to immersive sound systems as large as 13.1.10, while also offering owners access to an array of connectivity options for a fantastic home theater experience.

StormAudio will have a significant presence at CEDIA 2019, with static displays planned for booth #4237 and active demos in conjunction with Seymour-Screen Excellence/Audio Excellence (SR-10) and Alcons Audio (SR-13). For all the details, read the company's official press release below. 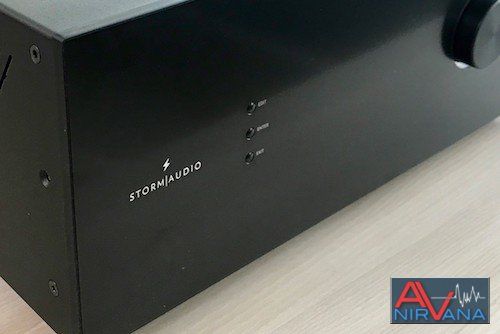 The processors incorporate StormAudio’s new proprietary 7+2 eARC HDMI card which makes for faster and more robust switching with full HDMI2.0b/HDCP2.2 support. Designed by StormAudio, the card delivers 4K,18 Gigabytes per second bandwidth on all input and output ports, solid DolbyVision and HDR10 is also supported. The integrated eARC (Enhanced Audio Return Channel), a feature of HDMI 2.1, provides a big boost in bandwidth and speed, sending the high-quality audio from the 8K TV to the processor, and on to the amps and speakers.

The brand’s new Mark2 platform can decode up to 24-channels (Dolby Atmos 13.1.10) and features ultra-fast codec switching time and substantially reduced latency (50% reduction). With respect to immersive audio formats, the processors are ready to support both DTS:X Pro and IMAX Enhanced.Also incorporated is Auro-3D Version 2 which enables use of back speakers in a 13.1 layout with a 9.1 or 11.1 Auro-3D stream. Auro-3D V2 also brings improved center channel dialogue when upmixing from stereo.

The processors featureStormAudio’s updated Bass Management system which allows for multiple bass zones (customizable selective redirection). As a major Dirac supporter the processors are ready for Dirac Live Bass Management support which launches at Expo. This premium license supports phase and time alignment of multiple subwoofers within a theater. It is provided at no charge to StormAudio dealers and customers.

The Mark2 line’s modular approach, same as with the current preamp/processor line, will bring options such as Digital In, Audio Video Bridging and RCA out, with even more card options planned for 2020.

2020 Brand Refresh: New Industrial Design and Logo
Mark2 represents an updated new hardware look and also incorporates the brand’s refreshed logo. “This past 18-months StormAudio has grown from a small adventure to a technical and commercial success, thanks to the dedication of its team and partners,” says StormAudio CEO Olivier Thumerel. “To reflect this change and initiate a new era for our company, we felt it was time to simplify and modernize our image. We are excited to present ‘the new StormAudio’ to the industry at 2019 CEDIA Expo.”

Continuation of Advanced Feature Sets and CapabilitiesStormAudio’s philosophy is that luxury immersive hardware doesn’t need to be complex and time-consuming to setup. Today’s integrators have enough to deal with. The brand’s web-based user interface still remains the fastest, most intuitive GUI in the channel. Literally in minutes, from a laptop, the installer can have the system up and running, including engaging advanced control options and use of StormMonitoring Web-Based Remote Monitoring.

The processors can be customized and upgraded at time of order, or in the future by way of their scalable, modular platform. For example stepped-up to fully support 32-channel outputs (digital) over AES/EBU or Audio over IP, or support a DCI server/player 16-channel AES/EBU interface.

Great news for anyone who has a really large room. I hate to ask how much it is for the processors... I am thinking $15k or more.

I inquired about pricing but didn't get an answer, so they're obviously not set yet. But, the last crop of models wasn't cheap. I think their old 8-channel amp was in the $6.9K range... and the 32-channel processor was closer to $20K.

Just to note, StormAudio has a new logo... you can see it on the case photo, above.
R

I wonder if there will be an upgrade path for existing owners of Storm Audio, Focal Astral 16 or Bryston SP4 processors?
The unit looks to be 1U taller to accommodate the additional outputs required.

Hey there @ReTrO, I've not heard any indication that there will be an upgrade path. The new proprietary HDMI card will be offered as an upgrade for previously manufactured 4U StormAudio processors. That's the only info we have at this time.
R

Same. I guess my best hope for a very recent Bryaton client of mine is that the new main board fits in the old chassis so we can get the new processing available. Oh and then hope the extra output expansion connections will then support discrete channels with Dirac each rather than duplicating or being matrixes out.

Have you ever retrofitted something like that before? I guess it's possible, but I'd be surprised if they didn't add a few design tweaks to keep that from happening.
R

Not with their equipment, but certainly with others. We can only hope!
D

ReTrO said:
I wonder if there will be an upgrade path for existing owners of Storm Audio, Focal Astral 16 or Bryston SP4 processors?
The unit looks to be 1U taller to accommodate the additional outputs required.
Click to expand...

I just received an answer from Storm Audio customer support that can answer your question
Whenever the mk2 comes to life in early Q1 2020, a new firmware release V4.0 will be out. This firmware will be compatible
with any ISP, including the existing mk1 . This will bring almost all the features of mk2 to a mk1 ISP apart from the decoding
which requires a hardware upgrade ( so still limited to 16 channels, no DTS:X Pro nor IMAX Enhanced )
The Dirac Live Bass Management will be possible but a new licence will have to be bought to activate the Bass management
feature. Discussions are ongoing, but we expect this to cost around 400€.
So far the answer I received this morning from the Storm Audio Support Team , I hope this answers a lot of questions that
existing owners of the mk1 ISP might have.
R

Thanks Davy. I guess that makes sense! I'm not remotely bothered by the IMAX Enhanced, yet to be impressed by it and the demo disc is woeful. The dts Pro isn't so bad given the 'low' channel count of the current processing either.
So a new HDMI board and new firmware and we're good to go.
D

Hi ReTro, 16 decoding channels is probably all I ever need . I will also install the new eARC HDMI board ( probably next year ) . I am also interested in the Dirac Live Bass management tool but I will first try to find out if it can better integrate the subwoofers in my system . At the moment I only have a 5.2 system and it will take me at
least another year to know where I will go from here ( I know I am doing it slow but mostly I don't regret my decisions afterwards )
Making it possible to expand the 16 decoding channels of the MK1 ISP to the 24 decoding channels of the MK2 ISP would probably have been very expensive .
The back panel of the MK2 is different and the main board would have to be replaced by the new one. when I look at the back panel of the MK2 I don't think the unit is larger but that is just my opinion . Anyway I am very happy with the MK1 ISP processor and with Storm Audio. Whenever you contact their support they always respond very quickly even in the week-ends.
R

The system I'm working on is running 9.1.6 with dual subs off the .1 output. It would be nice to add extra dedicated discrete outputs with their own Dirac for the Procella subs (or even adding more) but it works well.
D

ReTrO said:
The system I'm working on is running 9.1.6 with dual subs off the .1 output. It would be nice to add extra dedicated discrete outputs with their own Dirac for the Procella subs (or even adding more) but it works well.
Click to expand...

The German Distributor of Stormaudio posted a video on youtube about the ISP MK2 and the upgrading of the ISP MK1 ( CEDIA 2019: Stormaudio ISP MK2 + eARC Panasonic HDMI Board )
First he shows the MK2 and says the price will be a little higher than the MK1 and that the signal to noise ratio on all channels is better compared to the Mk1. There will also come a new app for MK1 and MK2
Next he shows the MK2 with the new HDMI Board already build in.
He explains in the video that it will be possible later on to replace the old main board and decoder board by the new MK2 boards.
Further he says that the Dirac live Bassmanagement tool will come at an extra cost ( around 400€ ) for the MK1 and the MK2.
The answer I received from the Stormaudio support earlier on mentioned that the decoding would require a hardware update .
I guess it could be that they meant replacing the main board and the decoding boards.
I probably will go to the Xfi hifi show in the Netherlands at the end of the month , the Benelux Distributor of Stormaudio will be there to .
I will ask them if they can confirm this.
R

I'm not sure they're the distributor, but they do some good content (which I try to understand with my limited school level German!)

I stand corrected by myself!

They confused me by having a different company name to their YouTube channel.
R

Good news on the upgrade front. All current Mk1 units can be hardware upgraded to Mk2!
P

Davy Manley said:
...I probably will go to the Xfi hifi show in the Netherlands at the end of the month , the Benelux Distributor of Stormaudio will be there to .
I will ask them if they can confirm this.
Click to expand...

Hi, as i am starting to develop an interest in the product, would you mind telling me who the Benelux distributor is? I have seen a company named "Viertron" , but they dont seem to be retailers. I live in Luxembourg , by the way.

Thanks in advance and kind regards
D

Hello Peter, the Benelux Distributor is Viertron BV ( you are correct they don't sell directly to customers ) . I don't know if they have a dealer in Luxemburg that
sells Storm Audio , but you can contact them to ask if there is a dealer near to you in Luxemburg or Belgium . You can send your request to info@viertron.nl
I bought mine from the previous distributor in Belgium.
The new MK2 version of the Storm Audio Processors will probably be available in aproximately 3 months from now.
With the Launch of the new MK2 line of processors end of Q1 2020 a new firmware 4.0 will be available. This update will bring key new features for
every ISP owner .
Here is a quick table summarizing what this update will bring