The Strangers: Prey At Night 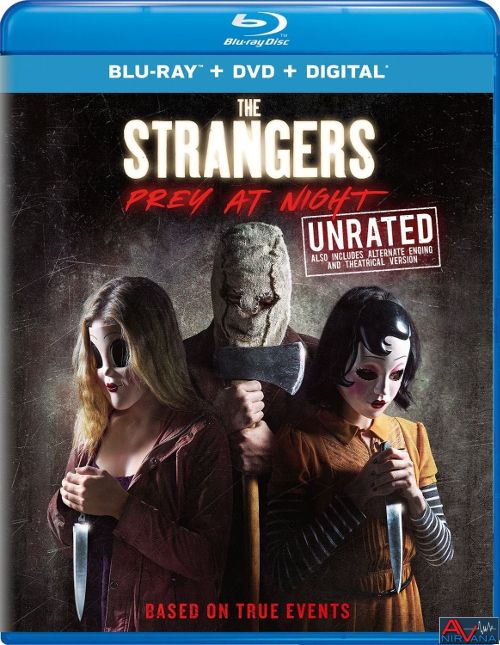 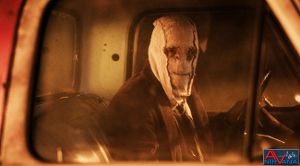 Movie
It’s actually been 10 years since the surprise hit The Strangers debuted in theaters, and only a few short months after I reviewed the collector’s edition from Scream Factory HERE. The Strangers was a unique film, in that it basically kicked off the modern day home invasion thriller/horror genre. Films like The Purge (the original, before they went all action horror), You’re Next and the like ALL got their influence from this little low budget horror film about three masked people terrorizing a young couple. Usually I find that horror sequels to popular films get sequels in 2-3 years, but for some reason it took a decade for Universal to decide to invest in making the sequel. I’m also usually VERY leery of DTV sequels, but for some reason I was actually really intrigued by the trailers for The Strangers: Prey At Night. It didn’t look as cheesy and low quality, with a decent cast and the promise of another terrifying visit from the three masked killers. At the end of the day the movie did deliver quite nicely. Prey At Night doesn’t try to reinvent the wheel, or really try and do anything too different, but they made some cool tweaks to the story that kept it from being a complete retread of the first movie.

Like The Strangers, we’re introduced to the new victims right off the bat. Cindy (Christina Hendricks) and Mike (Martin Henderson) are taking their trouble making daughter Kinsey (Bailee Madison) away from some unnamed conflict in their old home town, and moving her away to get a fresh new start. On their way to their destination, they stop at “Uncle Marvin’s” trailer park, where they can get their bearings before moving on. However, their little slice of redneck heaven is about to be interrupted by the three unknown killers from the first movie. Kinsey and her brother Luke (Lewis Pullman) head off to find their relatives, but end up only finding dead bodies. Running back to Mike and Cindy the two breathlessly tell their parents what they say, so Mike takes Luke with him to investigate, while leaving Cindy and Kinsey to hide in the trailer (always a smart idea in horror movies to split up guys. Sheesh). As the two groups investigate and hide, they are set upon by the roving masked terrorizers, one by one getting picked off until only Luke and Kinsey are left. Both wounded, both scared, the two teens realize that they have no hope of getting out alive unless they do something drastic.

As I said earlier, The Strangers: Prey At Night doesn’t really try to reinvent the wheel here. We have the setup of an abandoned remote area, a group of innocents set upon by strangers, and the blood soaked finish. It’s a good, gory time, with some nasty kills and a high sense of terror due to the sheer randomness and lack of exposition from the killers. The opening is a bit overly long as it tries to give some sort of bonding to the four family members, but once the three masked killers show up things get fast paced in short order. 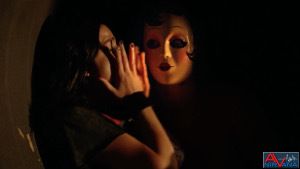 There are some quirks to the story that change things up (a few spoilers in this paragraph) a bit. The first few kills mimic the terrifying nature of the first film nicely, but in this one, the victims actually fight back with great results. At first we’re thinking that this is going to end similarly to The Strangers, but once Kinsey and Luke decide to take matters into their own hands, they switch the tables on the killers and it becomes a little more cliched with the single girl somehow making it out alive while the killers go down one by one. This adds a new dimension to the series, but also makes it a just a bit more cliché, as every slasher on earth follows this premise. One issue that really drove me nuts was the rampant stupidity that could have ended the conflict so much faster. There’s one scene where Kinsey is getting stabbed and Luke rushes in with a gun, only to not pull the trigger and just yells for the masked girl to “back up”. A move which ends up nearly costing Kinsey her life later as well.

For a sequel that comes 10 years after the original, I was actually rather impressed with Prey At Night. It’s a smartly paced film that has a lot going for it. The acting is well done for this genre (although Henderson is not exactly known for anything. I mean, he IS the guy from the all famous Torque), but sadly Christina Hendricks is mostly wasted in the film. The kids are where most of the focus is on and they do an adequate job at playing scared teenagers, and the three masked killers don’t really have to DO much besides look scary. It’s a creepy film, and one that just about lives up to the original. Which is something I didn’t think that I’d say.

Rated R for horror violence and terror throughout, and for language

The Strangers: Prey At Night is a DARK film, and I mean a REALLY dark film. The opening shots of the moving where we seem some semblance of daylight is literally the only portion of the movie where the filming is done outside of pitch black and ambient light from headlights and floodlights (that and the last scene of the movie). This is a movie that just survives on the black levels and shadow detail .Throughout the movie is mostly really good, with ambient light showing plenty of detail and the shadows looking really nice. There’s some digital noise here and there along the way, and the really shadowy portions show some banding and color shifting, but other than that, the image is extremely impressive. You can see the bright red of the daughter’s “Ramones” lettering on her T-Shirt extremely well, as well as rich red blood as someone in the film makes another kill. There’s a sort of yellowish hue to the film that tinges the entire experience, and sometimes shadows look a bit sickly as a result, but its a stylistic choice and once that keeps the film looking as creepy as possible.

The 5.1 DTS-HD MA track is more than capable of delivering a sonically creepy experience, with the music making up much of the more nuanced scenes. Dialog is always clean and clear, but the channel separate and surround use is dictated largely by the roaring of the FORD truck that the killers drive, as well as the popular music and score that accompanies the kill scenes. I did notice that there were several musical pieces in the film that sounded DECIDEDLY like the old Halloween films, with that little keyboard lilt that was so famous. LFE is deep and throaty, adding weight to the impacts of the truck hitting something, or the knife blades sinking sickeningly into someone’s body. It’s a great track for a 5.1 mix, and fits the aggressive nature of a horror movie perfectly.

• Alternate Ending
• "Prep for Night" Music Video – Director's Cut: The Man in the Mask, Dollface, and Pin-up Girl get ready to terrorize an unsuspecting family in a music video directed by horror auteur Mickey Keating (Darling, Carnage Park)
• A Look Inside The Strangers: Prey at Night: Stars Christina Hendricks, Martin Henderson and director Johannes Roberts talk about the making of the film
• Family Fights Back: Stars Christina Hendricks, Martin Henderson, Bailee Madison, Lewis Pullman and director Johannes Roberts review the film's characters and their fight to survive
• The Music of The Strangers: Prey at Night: Director Johannes Roberts and star Bailee Madison discuss the John Carpenter-inspired score and the '80s soundtrack that keeps The Strangers killing

The Strangers: Prey At Night is a surprisingly entertaining sequel to a film that was good despite being cliched. The movie devolves into some of the more basic tropes of a slasher film, but it still keeps that disturbing feeling alive by having the killers speak as little as possible. The one thing that makes these type of home invasions so scary is the seeming believability of it all. There’s no purpose, no supernatural story, just random evil people reigning terror down on innocent people. The Blu-ray by Universal is quite good, with great audio and good video, but once again the extras are a bit slim in this department. Still, the movie is a worthy sequel to the first film and does a good job at making an entertaining horror flick. Recommended for a good watch.

Thank you for the review. I will definitely see this one.