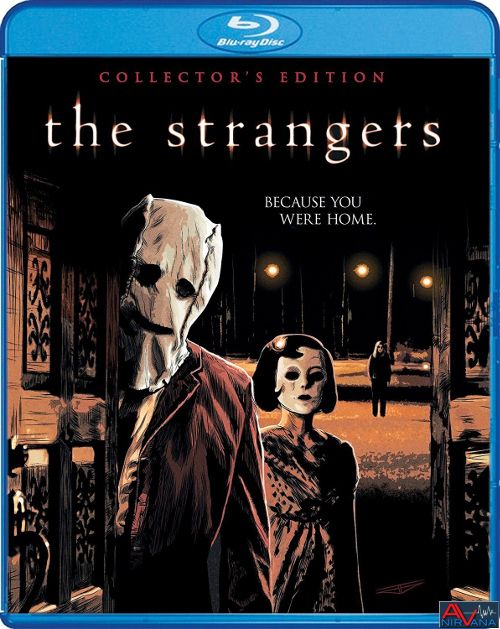 Movie
The idea of home invasion thrillers being a big thing wasn’t really fully released in the 20th century. Sure, we had films like Last House on the Left, but the idea of being at home and having people break into your house and mess with you before trying to kill you has been more of a recent phenomena. Movies like You’re Next (one of my favorites), Jackals, When a Stranger Calls and the The Purge (the original, not the sequels), only got their start due to the runaway success of a 2008 film called The Strangers. Bryan Bertoni had just gotten a grant for his third screenwriting gig, and was also given full control in the director’s chair as well. Shooting it on a $9 million budget, Bertoni raked in sizable $81 million during it’s theatrical run, and restarted the current trend of home invasion thrillers being a part of the horror genre.

The Strangers is actually a REALLY disturbing and dark film. For an 85 minute theatrical release (and an 87 minute unrated cut, which really doesn’t add much), it moves along at a breakneck pace, filing the viewer with despair, terror and an unmistakable sense of dread with a shocking ending that even left me a bit grossed out in the theaters. The plot is SUPER simple. James (Scott Speedman) and Kristen (Liv Tyler) have just gotten back to James’ cabin in a rural town after a HUGE fight at a wedding. The cause of their strife is shown pretty quickly (but I’ll let the film reveal it instead of spoiling, as the reason isn’t really something to worry about), and the two are getting ready to go their separate ways. That is, until the two hear a knock at the door and a young girl asking for a stranger arrives. Sending the woman away, the duo don’t realize that they have just opened the door for an utter nightmare.

Soon the two notice something is up. Kristen seems something outside, only to realize that the door is locked and the phone wires have been cut. A mysterious trio of masked figures being to taunt and torture (mentally) James and Kristen, driving them further and further to insanity as their cut off every avenue of escape and bring them closer and closer to the inevitable (and gruesome) goal.

The film is slow to build, but once it gets going with the mysterious invaders, it doesn’t slow down until the credits roll (literally). Kristen and James are forced into their most primal mode of “fight or flight”, and turning a simple evening into a night of terror. What makes it so palpable and “real”, is the fact that this technically could, and does, happen quite often. Coming from a family with police officers in them, I’ve seen the reports of people invading a home, trying up the family, and slaughtering them all for the fun of it. Kristen and James act like REAL people (for the most part), and use a mixture of logical, and illogical (based upon their emotional state) actions, which result in a helter skelter approach to the pacing. Actions are vicious and short, without long, drawn out, fight scenes, and the ending of the movie is so short and needless that it makes one sick to their stomach.

I’m not a huge Scott Speedman fan for the most part, this and Animal Kingdom have given him some street cred for having SOME acting chops. Both he and Tyler are very believable as a terrified couple fighting for their lives. The only problem is the fact that, like many horror movies, there are a few leaps of logic in the villain’s methods and it sometimes brought me out of the movie (the usual, “hey, how did they do that? That doesn’t make sense!” moments). Still, this was THE movie that shocked cinemas nationwide, and brought a whole new sub genre to the horror market alive. It’s brutal, short, visceral, and actually realistic enough to make the horror stem from the fact that something LIKE this could actually happen.

Rated R for violence/terror and language

Like most of Universal’s Rated/Unrated dual releases, The Strangers was originally housed on a single BD-25 (which wasn’t uncommon considering it was an 85 and 87 minute movie WITH seamless branching and mid range extras) and encoded using the older VC-1 codec. Well, Scream Factory has gone back and given the film a brand new 2K master (on both the rated and unrated cuts), and separate them onto their OWN 50 gig disc (not sure that was NECESSARY, as the original film only has a couple of minutes extra that could EASILY be attained using seamless branching, but I won’t complain over a fresh disc for each version of the film) and re-encoded with the more modern AVC code. The Strangers was a good looking film by Universal, but I have to say that I really like this new master. A/Bing the two discs, it’s pretty obvious that the original Universal releases is much more yellow, and there are a few more digital artifacts (crush due to the film’s heavy reliance on darkness, and some washed out scenes), making the new encode quite nice to look at. Clarity is ABOUT the same, but I still would give the new disc an edge due to the lack of artifacting and the cleaner look with the “less” yellow filter (although the film does have a nice amber look due it as that was how Bryan Bertino intended the movie to look like). The heavy blackness means the film is just bathed in continuous darkness, with only brief moments of brightness throughout the film. Detail is excellent, and the blacks show off a very healthy depth that doesn’t obscure shadow detail very much at all. There’s still some crush, but it’s not that noticeable on a 120 inch screen (and no discernible difference between the two disc that are given for the collector’s edition).

Scream Factory has followed their predictable pattern of putting on the original 5.1 track in DTS-HD MA, as well as a 2.0 DTS-HD MA track for night listening, with my focus going on the 5.1 track. It sounds like Scream is using the same 5.1 DTS-HD MA track that the Universal release was renowned for. Channel separation is excellent, with the knocks on the door shocking the listener up from an otherwise languid listening experience during the first 25 minutes. After that the tense music fill out the surround speakers, and the shuffling and scraping of the invaders in the surrounds is pinpoint accurate. LFE is deep and throaty, adding weight to the shotgun blasts, as well as filling up the score with some nice low end. Dialog is crisp and well defined, anchored firmly up front in the center channel, and the mains make use of some really nice panning effects as James and Kristen struggle to hear where there tormentors are coming from.

Offering up a Ten year anniversary collector’s edition, Scream Factory’s new release is a solid upgrade over the Universal single disc. Once again the audio is the same as the previous release, but the video is a nice little upgrade from an already good Blu-ray. Along with the neat cover art and slipcover, along with a few additional extras, this is THE definitive version of the film. If you HAVE the movie already, it will really depend on how much that extra quality from the video is to you, as well as the extras, but for newcomers this is a no brainer. The Strangers was seminal in being the modern rise of home invasion thrillers to the public, and is still a fun movie today, and the great collector’s edition from Scream Factory makes it all the sweeter. Good Watch.

Hmmm. Mike, you hooked me on this one. Just hit the order button!

make sure to actually get the Scream factory release vs. the uni release this time. This time around the video is actually a solid improvement and warrants the price

Thanks for the review. I will catch this one once available on Amazon Prime/netflix.

Thanks for the excellent review. Yes when I first found out about Bryan Bertnoni doing the screenwriting and directing it I thought it was cool because he is from Crowley, TX just a few minutes from where I live in Fort Worth. The movie is very suspenseful and for a young writer/director I think he did phenomenal. I own the universal copy but will DEFINITELY order this new version.

Michael Scott said:
make sure to actually get the Scream factory release vs. the uni release this time. This time around the video is actually a solid improvement and warrants the price

unlike the Drag me to Hell release, this one actually has a solid remaster on it that is noticeable. I think you'll enjoy it. It's twisted, dark and really suspenseful, but really doesn't have more than 2 scenes of actual bloody gore (I know you're not a big huge fan of blood dripping from the ceiling)

Asere said:
Thanks for the excellent review. Yes when I first found out about Bryan Bertnoni doing the screenwriting and directing it I thought it was cool because he is from Crowley, TX just a few minutes from where I live in Fort Worth. The movie is very suspenseful and for a young writer/director I think he did phenomenal. I own the universal copy but will DEFINITELY order this new version.

Oh nice! always fun to find out little tidbits like that. And I agree. For a first time director (it was actually his third film he wrote) it turned out well. I'm hesitantly curious about the sequel, even though he's not involved

Michael Scott said:
Oh nice! always fun to find out little tidbits like that. And I agree. For a first time director (it was actually his third film he wrote) it turned out well. I'm hesitantly curious about the sequel, even though he's not involved
Click to expand...

I hope it's as good. I heard they aren't letting any critics see the premier. That can be good or bad. It almost seems like they aren't confident on how it turned out.

lol, yeah, that can go either way. I'll be watching it though