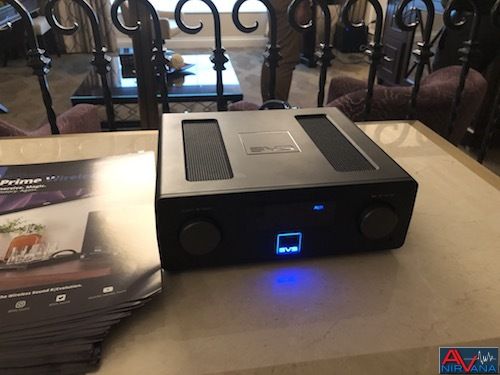 SVS's Prime Wireless SoundBase at CES 2018(January 18, 2019) SVS brought its new 3000 Series of subsonic sledge hammers to CES 2019, showing off both the SB-3000 ($999-$1,099 depending on finish) and PB-3000 ($1,399) in a great sounding demo at the Venetian in Las Vegas. The 3000 Series, which was originally announced last November, features both a sealed (SB) and ported (PB) design that carry an all-new 13” driver backed by a dual ferrite magnet motor assembly and a rigid lightweight aluminum venter cone with a composite fiber dust cap. Power is delivered by a Sledge STA-800D2 amp that features Class D efficiency and 800 watts RMS output (2,500 watts peak). That power is married to a 50MHz Analog Devices Audio DSP with 56-bit filtering, a processor that controls output through room optimization, frequency response curves, and other DSP controls. Much like other recently released SVS subs, these kinds of controls (and a few others) can be accessed and fine-tuned using the free SVS app available for Apple, Android, and Amazon devices.


The PB-3000 was actively being put through its paces at CES, flexing its muscle with thunder and thump, filling a demo suite with controlled and textured bass. I was certainly impressed and performance output sounded great. This particular model is rated to hit down to 16Hz when run with both ports open, while the sealed cabinet natively hits just 2Hz higher (down to 18Hz). Size-wise, both subs are very manageable and have a room-friendly visual presence, which isn’t surprising for SVS designs. Taking those factors under consideration, the subs should prove to be incredibly popular with enthusiasts looking to strike a balance of great performance and form factor (not to mention price). 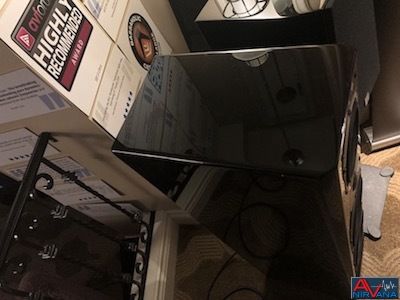 In an adjacent suite, SVS had a full complement of its new wireless products in active demo modes. The upper level of the suite had the company’s Prime Wireless SoundBase ($499) powering a stereo pair of Ultra Bookshelf speakers, while the lower level area featured several different zones of the company’s Prime Wireless Speaker System ($599/pair). Both are impressive products that unlock great sound and compatibility with other DTS Play-Fi wireless products. AV NIRVANA is scheduled to receive a SoundBase demo unit for review in the months ahead!

SVS's Prime Wireless models were surprise reveals at last year’s CES event, so it's not shocking the company arrived with an intriguing new product up its sleeve (pictured). This product hasn’t been officially announced and SVS was asking media outlets not to share too many specifics. Here's what I can tell you: it’s an all-new full-range speaker design and I’ve had a chance to see specs (which are extremely compelling) and hear the speaker in action (it sounded great). No release date has been set (it could be quite a while), but SVS is definitely prepping to uncork another great model for fans looking to outfit a room with an affordable high-performance sonic engine.

We’ll have updates on the new product as soon as they become available. In the mean time, click on the video below to hear SVS's VP of Marketing (Nick Brown) talk about the company's presence at CES 2019.

SVS is up to some good. This is pretty cool. I know some fellow journalists that aren't so pleased with this pivot to wireless, but I think its smart. There will continue to be a market for wired speakers, but a lot of people want a set and forget product. To get those individuals to begin using higher end and true audiophile quality sounding products, I think we need to start producing them. This might be the right move in that direction.

As for the 3000 series, I had hands on with the 4000 when it was first released and was very impressed. For the size and price, they are a really good value. Companies like JTR might get you a bit more output for the money, but it will be in a much larger package. Within this size and price, anything that is a better "value" is of worse quality. All I can say is, Keep up the good work SVS, you've converted me into a fan.

Been a fan of SVS since the beginning more than 10 years ago when I received my SVS PB13u (still going strong) Ive also go a pair of original SVS SBS01 bookshelf speakers as well and love them.
SVS continues to make great sound affordable to the masses without compromising on quality!

Anyone who isn’t into the wireless / active speaker movement is crazy, IMO. Why not? And the idea of active speakers is fantastic, with the x-over digitally managed, assuming appropriate power is onboard.

Any company not willing to do it is risking a sharp fall to the wayside... it’s the future.

I agree Todd, that was the demise of Nortel. In the 90s when wireless was a new thing in telecommunications they refused to get on board and develop wireless technology it was the beginning of the end for them.

I own SVS Prime towers, Center and Satellites and love them.

Tony V. said:
I agree Todd, that was the demise of Nortel. In the 90s when wireless was a new thing in telecommunications they refused to get on board and develop wireless technology it was the beginning of the end for them.
Click to expand...

The simple fact is that audiophiles are a rapidly aging population and the next wave of buyers needs to be catered to. Many of those buyers want simple and hassle free gear. They’ve already proven they’ll sacrifice quality for convenience. It’s the job of speaker companies to design for convenience while hooking buyers with performance.

I think they can do it... but times, they are a changing!

I really believe that connected devices are the future for audiophiles. It just makes sense. We are about being connected to our music, what better way than with things like wireless speakers and streaming. This allows good sound anywhere at the touch of a button.

I remember dreaming of one day having a dedicated walk in closet for all my CD's and records, movies, etc. Now I have that much music at my fingertips at any time.

That was a cool video Todd... love the ad blurps for us.

SVS never ceases to amaze me... they just keep on keeping on. I would not be at all surprised to eventually see them like Emotiva... offering amps and processors at some point in time.

Sonnie said:
That was a cool video Todd... love the ad blurps for us.

SVS never ceases to amaze me... they just keep on keeping on. I would not be at all surprised to eventually see them like Emotiva... offering amps and processors at some point in time.
Click to expand...

Thanks Sonnie. I’ll pick up some more gear for CEDIA and do more. We do have about 5 or 6 similar videos from CES this year from Kanto, Emotiva, GoldenEar, Monoprice, NAD and Wolf Cinema. The past 8 days were pretty much lost for me, so they’re slowly working their way into content... nearly all, save for Emotiva and NAD are up on our YouTube channel right now.