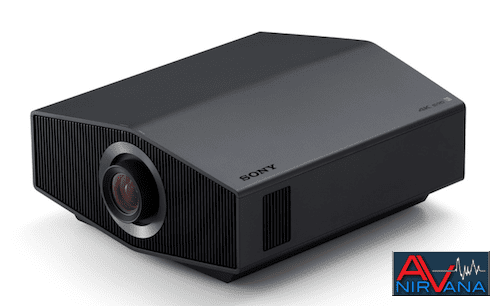 (April 29, 2022) Sony has blown the doors off a rather quiet month of reveals by launching three new exciting home theater projectors. Leveraging its all-new SXRD 0.61” panel, the world's smallest native 4K 3840 x 2160 panel, Sony’s engineers have shrunken the overall size of the bread and butter models of its projector lineup. It's also officially eliminated the use of lamp-based technologies, opting for a blue laser+phosphor light source with a 20,000-hour lifespan.

"We're excited to debut these compact, high-brightness laser projectors, with a new design that creates flexibility and options for consumers with today's variety of home media viewing rooms and differing lighting needs,” said Tyler Ishida, President of Consumer Business Group, Sony Electronics Inc. “These new models showcase our continued commitment to products that provide extraordinary experiences while increasing value to the consumer with every generation.”

In a segment that traditionally features large and bulky equipment, Sony’s latest panel innovation has paved the way for the most compact native 4K-capable projectors on the planet. The all-new VPL-XW7000ES and VPL-XW6000ES are both 20% smaller and 30% lighter than the older VPL-XW915ES, and the new VPL-5000ES is 30% smaller and 35% lighter. Those kinds of reductions make for easier handling during installs, particularly considering ceiling mount applications, but also reduce environmental impacts by minimizing production and packaging materials.

Pricing-wise, Sony’s new laser-equipped offerings are competitively positioned against both JVC and Epson laser models which start at $11,000 and $4,000, respectively. Priced at $27,999, the VPL-XW7000ES is the most expensive of the trio, with the VPL-XW6000ES ($11,999) and VPL-XW5000ES ($5,999) landing in much friendlier budget territories. Those prices are slightly reduced as compared to the models they’re replacing, which include the laser-based VPL-VW1025ES and VPL-VW915ES. Sony’s also phasing out its VPL-VW715ES, VPL-VW325ES, and VPL-HW65ES lamp-based projectors.

All three new models utilize Sony’s X1 Ultimate for Projector processor which, until now, has been exclusively reserved for the company’s flagship VPL-GTZ380 model ($80,000). This processor enables unique features like Dynamic HDR Enhancer for a better HDR impact during bright and dark scenes. It also offers Object-based Super Resolution for more powerful real-time picture processing that analyses objects of each frame for enhanced High Dynamic Rendering.

The VPL-XW7000ES sports 3,200lm of brightness and a new 70mm diameter Advanced Crisp Focused (ACF) lens with an aspherical front element and floating focus system. The VPL-XW6000ES dials back brightness to 2,500 lm of brightness, and the entry-level VPL-XW5000ES delivers 2,000lm of performance. All three models achieve 95% reproduction of the DCI-P3 color gamut while offering native compatibility with HDR10 and HLG HDR. HDR10+ compatibility is notably absent, as is 3D support on the VPL-XW5000ES.

Surprisingly, all three carry HDMI 2.0b connectivity. This delivers support for HDCP 2.3, an input lag reduction mode that’s specified to deliver 27ms lag with 4K/60Hz signals and 13ms lag with 2K/120Hz signals. It does, however, eliminate support for 4K/120Hz gaming, Auto Low Latency Mode, Variable Refresh Rates, and G-Sync, each of which are key HDMI 2.1 features reserved for hardcore gamers.

Sony says the VPL-XW5000ES and VPL-XW6000ES will be available in either black or white, while the VPL-XW7000ES can only be purchased in black. Release dates are currently projected to be mid-June 2022.

Interesting...been quite awhile since I've seen a Sony projector with my own eyes. Now that we've entered the laser realm, how are their black levels comparing to JVC? And tone-mapping?

Very good questions... we'll have to wait for the review guys to get their hands on them. My understanding is that JVC's laser PJs have a slight uptick in blacks. So, perhaps Sony will be the same?

I'd have to dig a bit further on specifics, but these new PJs all have dynamic tone mapping onboard. It's a real shame they lack HDMI 2.1. For me, wouldn't be an issue, but that's going to be a deal breaker for gamers!

I had the pleasure of seeing Sony's new XW500ES and the 6000XW and 7000XW in person at Sony's NYC March 17th press conference and a private meeting after the press conference.

I can't wait to see these in action. I think they've even added an IMAX ENHANCED mode to the picture settings. I just wish there was a way to access Sony’s Bravia Core so we could really take advantage. Now I have to find a buyer for my 715 so I upgrade.

daddio77 said:
I can't wait to see these in action. I think they've even added an IMAX ENHANCED mode to the picture settings. I just wish there was a way to access Sony’s Bravia Core so we could really take advantage. Now I have to find a buyer for my 715 so I upgrade.
Click to expand...

I had the pleasure of seeing Sony's new XW500ES and the 6000XW and 7000XW in person at Sony's NYC March 17th press conference and a private meeting after the press conference.
Click to expand...

Did your eye see any bump (degradation) in black levels?

@Todd Anderson, from what I could tell at Sony's presentation/demo the blacks were very deep and detailed.

It is great to see Sony getting aggressive against JVC in terms of pricing. Hopefully it is also in terms of performance. Will be very interesting to see the measurements. I am 100% convinced that in some use cases, the Sony will definitely win, hands down. And wouldn't it be cool if the Sony lineup ends up being the better choice in most situations, dethroning JVC?

The 5000ES in particular is going to be right there in the ballpark of the Epson laser and JVC bulb unit....lacking automated/motorized lens adjustment, but for people with a 16x9 screen, that's probably a non issue.

I'll guess that the JVC still has better tone mapping, since the JVC takes into account the nits output in the room and maps to that, whereas the Sony has a generic engine that assumes an SDR max output, and tone maps the highlights to that. But I'll be happy to be proved wrong, if Sony has updated their algorithm to allow the user to adjust based on room conditions and actual level off the screen.

But perhaps the biggest unknown which we won't know for a while: Sony got out the commercial 4k SXRD cinema market a while back, because of premature panel degradation. Domestic projectors get used far fewer hours, but the Sony in home SXRD panels had similar problems for some users. I sure hope that part of this new tech they are using has solved that issue. Otherwise, the 20k hour to half output spec may not be the ultimate limiting factor for some people.