Are you able to play mkv files from your Plex server?

Yes, everything is MKV with no transcoding, except the audio was being transcoded for AppleTV.

I backed up my copy of How to Train Your Dragon The Hidden World yesterday. It took about an hour and a half or so and then another half hour to get it on my NAS. But it refuses to play from my AppleTVs. Haven’t tried the Roku’s yet. Gives me an error that something went wrong with my media.

How are the AppleTVs connected to the network? Wi-fi would be a stretch for UHD without transcoding. With the AppleTV, it's already having to transcode the audio somewhere, likely on your Plex server machine. If you're streaming Wi-fi, it's also then probably down-converting the video to something it can push through your wi-fi.

When you ripped the disc, did you select everything on it, or did you pick and choose which titles to grab? Some discs have "spoof" information in them, so it's possible you ripped the wrong title. I can't remember exactly what I grabbed from that one, I've ripped so many in the past month.

The thing that made me really dig in and check what was happening with the audio is that I was trying to watch Pirate Radio the other night, which is only 1080p, and it was stuttering. I went to my server and found the Transcode settings on minimal effort, which was not enough to convert the DTS audio track to DD+ on the fly while ripping a disc, apparently. I bumped up those settings dramatically to take advantage of the horsepower in my server, since all it's doing is feeding me movies, and I didn't have any issues for the rest of the movie, but that's when I started researching why it was having to transcode anything at all.

mechman said:
It took about an hour and a half or so and then another half hour to get it on my NAS.
Click to expand...

It takes my machine right around an hour to rip a UHD disc, but I'm also ripping right onto my NAS. I have a staging folder setup that is the default in MakeMKV, so everything lands there initially, and from there I just do a cut and paste into movies, tv, concert films, etc., so it's instant, since it's all on the same RAID and there's no moving files.

AppleTVs are hard wired. Maybe it’s because I didn’t put all of the extra files on the server with the main movie? I’m going to have to fiddle with this some today.

I have no issues with my HD-DVD titles that I put on there about a year ago.

You shouldn't need all the extra files. I only rip the main feature, primary audio, and English subtitles.

When you have a moment, put the disc back in and screenshot the files shown by MakeMKV. I'm curious if it's a title that has spoofed files. I'm leaning toward that as the cause.

Will do. Check back in an hour or so. 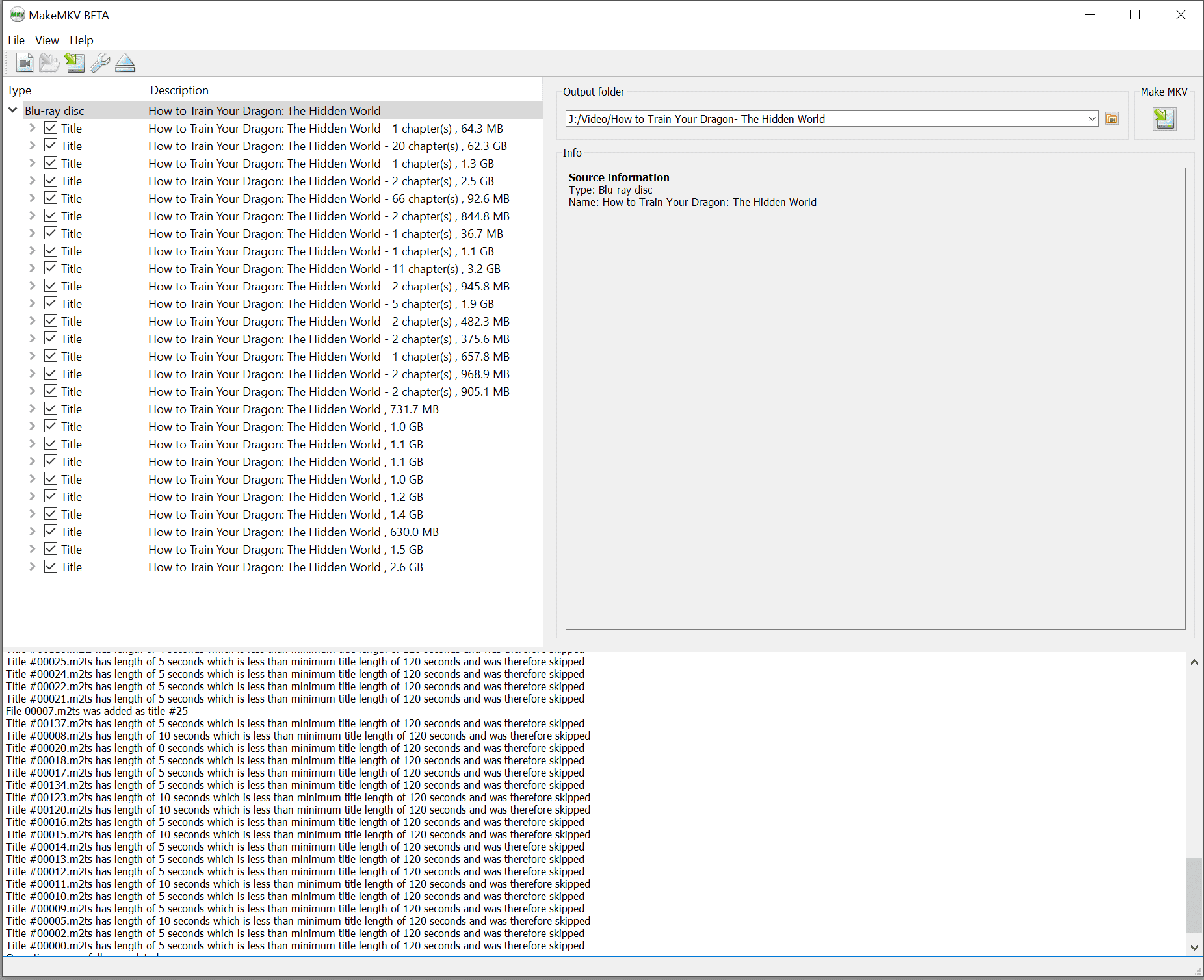 It could have just been a bad rip, too. I noticed yesterday while setting up the Shield that John Wick Chapter 2 wouldn't play, and it said there was no audio. I deleted and re-ripped it and all works fine now.

Second time was a charm. It works now.

Thanks for all the help T! I've got quite a few titles ripped and up on the server now. I think it's gonna take me months, maybe years, to get it all done. I still can't get the titles to save to my NAS though. I'm sure there's a way to do it but I haven't figured it out yet. It's probably some permission that I need to set or something.

I'm really liking it, especially now that I have the Shield in the theater and I'm getting the lossless audio. So slick. I've got just about my entire collection ripped, but I'm going to need more hard drive space before I can finish up. I'm pushing 8TB now...

I would say I'm about halfway thru my library (about 180 movies up on Plex now) and I'm really starting to appreciate this. The only thing that I notice lacking is Atmos. That and I do have one movie still giving me hiccups no matter what I try - Back to the Future 3.

It's kind of nice though seeing a movie being broadcast on TBS, AMC or wherever and then just switching over to watch it from my library commercial free!

I don't have any Atmos setups, so I hadn't noticed? Plex doesn't do Atmos yet?

The good thing is, MakeMKV should be maintaining all that metadata, so it's there when the playback supports it.

I've got my main library loaded. I just added another 4x10TB drives last weekend, essentially adding 30TB of storage. So now I'm going through and adding a handful of DVDs and concert DVDs. But I'm also skipping about half those discs, due to the unlikely possibility I'll want to watch again.

I haven't tried any yet to see if Atmos is there or not. I thought I read on the MakeMKV forum that it was not retained but since I posted that, I see that it is.

Okay, I just googled a bit, too. Seems it's just because you're using AppleTV. ATV can't play the lossless audio tracks, so Plex is transcoding that and dropping the Atmos data during that process.

Now, if your theater room is based on a flat panel display, you have sacrifices to make.

Not so sure I could do away with my AppleTV... decisions...

I love my AppleTVs, but I put a Shield in the theater, and use it for Plex only. The Plex app is actually better for the Shield for your library, not as good for the live TV section.

Last night I set up the Shield to run at 4K 23.976 for menus, and it has REALLY sped up the sync with the JVC projector. Now it doesn't have to do anything when I hit play on an SDR movie, and the handshake to go to HDR only takes about 2.5 seconds. BIG TIME improvement there.

Would this be what I'm looking for? I don't need the gaming version do I?

mechman said:
Would this be what I'm looking for? I don't need the gaming version do I?
Click to expand...

Yes, that's the one I ordered. The only difference with the gaming version is that it comes packaged with a gaming controller. The Shield itself is identical.

I picked one up. So far I haven't been able to get it to do Atmos through Plex. I'm going to spend some time on it tonight though cause I'm certain there's something that either needs to be selected or de-selected to get it to work.

Had to set audio to Passthrough on the Plex app. I've got Atmos now.

I still don't know if I'll set up Atmos. It won't be in this room. A lot will depend on where I end up and the house I end up in. No basements where I'm headed, so I'll have to see what kind of space I end up with.