Scarface: The World is Yours Edition - 4K Blu-ray Review

Scarface: The World is Yours Edition 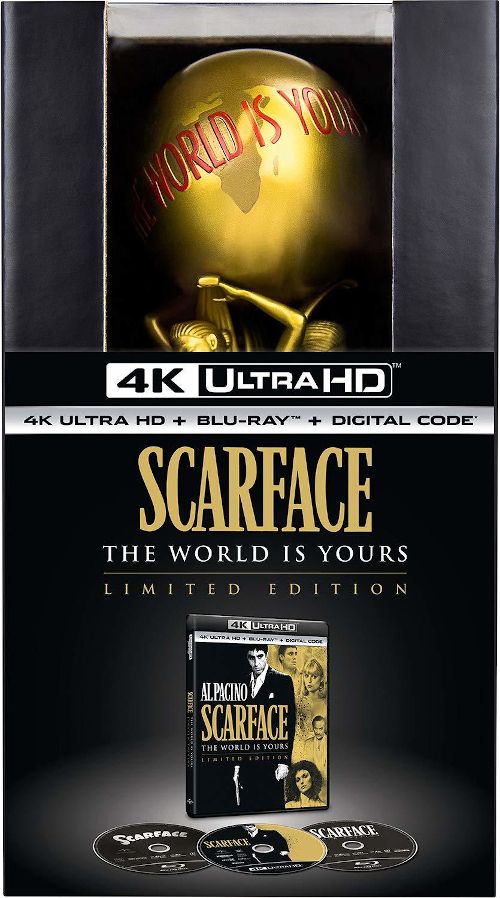 Movie
When one thinks of Al Pacino and is asked to name the first movie that comes to mind, there are likely two films that are going to be named. The first one is Heat, and the second will almost always be Scarface. If there ever was a film that defined a man’s legacy in cinematic history, it would have to be Brian DePalma’s and Oliver Stone’s 1983 gangster drama. The film has been an iconic classic in the gangster film genre for quite some time, and I have the 2011 Blu-ray and have watched it many a time (even being a near 3 hour movie), but have always lamented that the transfer was done back during the day when Universal was using DNR laden messes. Now, it’s not nearly so bad as stuff like The Jerk, but Scarface is a movie that really deserved better treatment. Luckily Universal Studios has decided to give us what we have wanted for the last 8 years with a brand new 4K remaster of the film, and not one, not two, but THREE different releases to choose from (2 of them being 4K UHD), the last of which is this “The World is Yours” edition.

I'm not going to be reiterating what's been written in both the regular and the 4K UHD release reviews, thus we'll be including links so you can read said full theatrical reviews below

As with the film analysis, there are links below to take you directly to the reviews of the 4K UHD and remastered Blu-rays where you can check out the video scores and write-ups

Yup, same thing here. Links are provided below to check out the audio portions of the 4K UHD and Blu-ray reviews

• Scarface 1932: Released for the first time ever on Blu-ray
• NEW! Scarface: 35th Anniversary Reunion
• The Scarface Phenomenon
• The World of Tony Montana
• The Rebirth
• The Acting
• The Creating
• Deleted Scenes
• Scarface: The TV Version
• The Making of Scarface: The Video Game 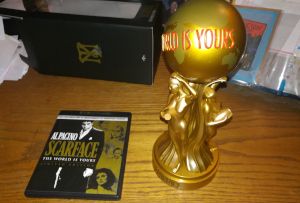 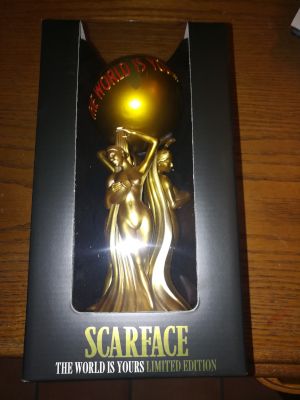 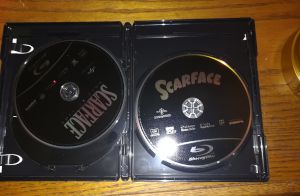 Scarface is still just as much of a classic watch today as it was 36 years ago, and Universal’s new 4K remaster is just what the doctor ordered. Whether you love or loathe the excessive film, it has to be admitted that the movie has become an indelible part of popular cinema in the last 3.5 decades. The new transfer brings what we’ve always wanted to the table, with the Blu-ray certainly looking nicer than the old 2011 release, and the 4K disc looks simply magnificent. If you have the equipment (or if you’re just future proofing), then it is easily the version to get as it handily eclipses the 1080p disc.

Most of you are really reading THIS particular review to find out what exactly is different with "The World is Yours" edition vs. the regular 4K UHD Gold edition. It's a bit of a mixture of swag and video benefits, as this edition comes (as you can see from the pictures above) with a solid plastic (almost a rubbery kind) statue of the infamous "The World is Yours" statue found inside Tony Montana's estate. The statue stands about 10.5 inches high x 5.75 inches wide, but 5 inches deep, and is pure gold in color. ALSO found within the Blu-ray case is a newly minted version of the 1932 gangster movie Scarface from whence the DePalma version was remade from. While not reviewed above, the film itself looks and sounds great for a 1932 movie, and is a VERY welcome addition to the set. Both the statue and the 3 disc 4K UHD case are stored within a standup box that carries with in a fuzzy satin molded carrying container so that the statue doesn't flop around and crush anyone. This is a swag edition that comes with the added benefit of the original 1932 movie that spawned this one, and as such may actually be worth it to more consumers than the typical "swag editions" that get put out today thanks to the inclusion of the 1932 flick. Again, a highly recommended release whether you get this one or the regular 4K UHD "Gold" Edition of Scarface