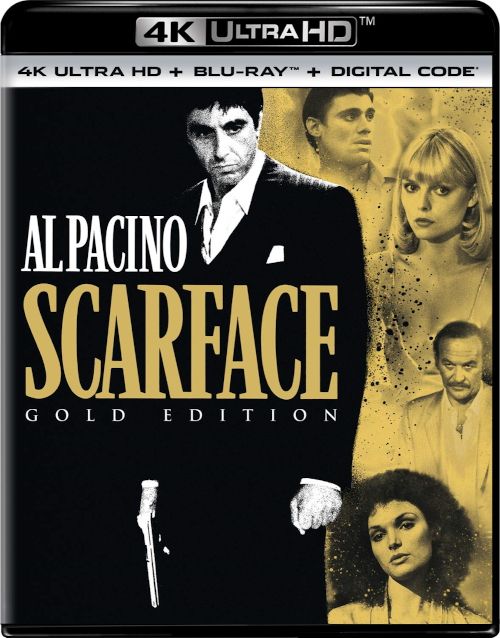 Movie
When one thinks of Al Pacino and is asked to name the first movie that comes to mind, there are likely two films that are going to be named. The first one is Heat, and the second will almost always be Scarface. If there ever was a film that defined a man’s legacy in cinematic history, it would have to be Brian DePalma’s and Oliver Stone’s 1983 gangster drama. The film has been an iconic classic in the gangster film genre for quite some time, and I have the 2011 Blu-ray and have watched it many a time (even being a near 3 hour movie), but have always lamented that the transfer was done back during the day when Universal was using DNR laden messes. Now, it’s not nearly so bad as stuff like The Jerk, but Scarface is a movie that really deserved better treatment. Luckily Universal Studios has decided to give us what we have wanted for the last 8 years with a brand new 4K remaster of the film, and not one, not two, but THREE different releases to choose from (2 of them being 4K UHD)!

In May 1980, Fidel Castro opened the harbor at Mariel, Cuba with the apparent intention of letting some of his people join their relatives in the United States. Within seventy-two hours, 3,000 U.S. boats were headed for Cuba. It soon became evident that Castro was forcing the boat owners to carry back with them not only their relatives, but the dregs of his jails. Of the 125,000 refugees that landed in Florida, an estimated 25,000 had criminal records.

In walks the story of Tony Montana (Al Pacino), a Cuban refugee who comes into the United States trying to make a name for himself. Scarred from a pineapple by youth, and trained well in the harshness of Fidel Castro’s regime, Montana is bound and determined to make something of himself. Taking the first chance out of the refugee camp he can, Tony kills a man and gets his green card as payment by some higher ups in Miami, Florida. Moving out there he cuts his teeth on the drug trade by running coke for scumbag drug kingpin Frank Lopez (Robert Loggia). From there it’s up up and away as Montana begins to strike out on his own, making his own deals with the South American cartels and taking whatever he wants (including the beautiful Elvira, played by Michelle Pfeiffer). The only thing between him and the tippy top is his own self destructive behaviors, which soon spell his downfall when he bites off just a little bit more than he can chew.

Tony is the stereotypical story of being blinded by one’s own greatness. As he climbs the ladder to success the Cuban finally falls prey to his own vices and excesses. Pushing everyone away from him, the drug kingpin is soon left with no friends (well, except for one little friend), and soon those excesses become his own downfall. Control of his wife Elvira dominate his fantasies, as well as a Cuban girl that he wants but can’t possess, and like the ancient tale of Greece, flies a little too close to the sun in his arrogance.

Scarface is not exactly the thinking man’s gangster flick (movies like The Godfather are much more deep and introspective) and it thrives on melodrama and sheer visceral shock violence (for the 1980s) to tell it’s tale. Don’t get me wrong, DePalma directs the movie about as tightly and intensely as can possibly be done, and Oliver Stone’s script is incredibly potent. It’s just that this was not a film meant to delve into the mind of a gangster. It was meant to show how the incredible excesses of the 1980s drug scene could completely corrupt, warp, and ultimately destroy someone just from the sheer volume and weight of said excesses. It’s a tale of a man going completely out of control, and in the end losing everything.

An introspection into Tony is quite fascinating, even if it’s rather short lived and superficial. The man is completely obsessed with wealth and power, yet he enjoys none of it. He wants Elvira, but doesn’t care about her. He wants his Cuban princess, but only for completely lustful reasons, and he wants respect, even though he really doesn’t need it. His narcissism and depravity consume him into requiring all of those things, leaving him nothing but the empty shell of a man he is at the end. By the time the gigantic battle where we get to “say hello to my little friend!”, everyone’s cheering for Montana to die. It’s sad, but it’s totally intoxicating to watch at the same time. Scarface is a genuine classic of a film, and for good reason. It’s because of Al Pacino’s complete absorption into the role. Al Pacino has always been a fantastic actor, but here he just loses himself so completely into the role of Tony that you can’t see Pacino anymore, but rather the vice ridden drug dealer with an empty soul. His performance alone makes the film worth watching, even though DePalma and Oliver Stone masterfully direct him in his efforts.

The 4K UHD disc is head and shoulders over even the newly remastered Blu-ray disc, and WAY over the head of the old 2011 Blu-ray disc. The film has been lovingly remastered and the new headroom really allows the disc to fully breathe. The opening shots of Cubans coming into America will always be a bit grungy and nasty looking due to the source material they used for the clip, but once the camera opens up on Tony Montana in a police station things clean up VERY nicely. The film boast a very healthy grain structure that may seem a bit thick to some, but it’s a very natural look that fits the filming style of the original theatrical experience quite nicely. The use of HDR is astounding here, adding a much needed boost to the colors, making them appear much more rich and vibrant. The red’s of Tony’s estate literally pop off the screen, and the various articles of clothing in night clubs and the neon lights of the red light district really do shine. The blacks are deep and silky, with impressive detail that is crushed in the Blu-ray, but perfectly visible here in the 4K UHD disc. Simply put, this is a great looking encode for a classic film, with the only problem being some of the softness that is embedded in the original negative, especially on overhead shots or wide angle scenes.

In a surprise move, Universal has upgraded the 4K UHD’s audio track while keeping the 7.1 track from the 2011 Blu-ray on the newly remastered Gold Edition Blu-ray. This is more surprising than usual simply because when Universal puts a DTS:X or Atmos track on the 4K title, they do so with the Blu-ray as well, but since this is a catalog title with both the Blu-ray re-release and the 4K UHD released simultaneously I guess they decided to put the upgraded audio solely on the 4K disc. The DTS:X track is a punchy and aggressive one, opening up the surrounds and back end impressively, and adding in some weighty base. The entire track just feels a little airier than the 7.1 DTS-HD MA track found on the Blu-ray, and with he added heights we get some nifty sound effects overhead (such as the helicopter scene during Tony’s meeting with the cartels), and the dynamics are just a teensy bit wider.

• NEW! Scarface: 35th Anniversary Reunion
• The Scarface Phenomenon
• The World of Tony Montana
• The Rebirth
• The Acting
• The Creating
• Deleted Scenes
• Scarface: The TV Version
• The Making of Scarface: The Video Game

Scarface is still just as much of a classic watch today as it was 36 years ago, and Universal’s new 4K remaster is just what the doctor ordered. Whether you love or loathe the excessive film, it has to be admitted that the movie has become an indelible part of popular cinema in the last 3.5 decades. The new transfer brings what we’ve always wanted to the table, with the Blu-ray certainly looking nicer than the old 2011 release, and the 4K disc looks simply magnificent. If you have the equipment (or if you’re just future proofing), then it is easily the version to get as it handily eclipses the 1080p disc. Recommended

Thanks for the review. I have seen this movie countless times and own all the versions including the VHS. I met Angel Salazar (Chi Chi) while he was doing stand up comedy and he autographed the vhs and a couple of the blurays and a poster with the famous line Chi Chi get the yayo. I plan on getting this one but with the collectible statue.