Ok here's the situation guys. I have a bedroom setup that I use to watch movies when I don't want to fire up my entire main review system, and while I don't mind turning the volume down, I'm a bass head to the core. My main system in the front room are dual 18 inch martys and there is almost nothing those things can't do (insane). But for the bedroom I have a single SVS PB-10 ISD (I had two, but one just recently died). Now this bedroom is 12 wide, 14 deep and 8 foot tall (about 1350 sq feet) and a PB-10 does decently well. HOWEVER, I do get some strain cuz a 10 incher can only go so far since I like to listen at wall shaking levels. I've got it calibrated well enough and level matched, but on super low frequency things like End of Tomorrow and A Quiet Place (that thing has a frighteningly low sonic dip) and I get port chuffing on it, meaning I'm straining it just a bit more than it should be (the SVS-PB 10 drops like a rock past 25 hz, so anything low will strain it a tad). NOW, here's the conundrum. I have VERY limited areas to put the subs, and the front left of the room is pretty much my only spots. LUCKILY it's also one of the better spots in the room to put the sub when doing the sub craw,l so I lucked out. But what that means is I only have that front left of the room to put subs, meaning multiple subs to smooth nodes is out of the question, so I need to upgrade my old PB-10 to something beefier. Now I'm not going to afford a PB-13 or something, but I was looking around saw the PB-2000 and PC-2000 (I like the PC-2000 due to the footprint) which should be a substantial increase, but I've been out of the ID sub world for so long I have NO IDEA what the competitors offer.

my question is, besides the PB/PC 2000, are there any other subs in the $700-$900 range I should be looking at that would exclipse their performance? Also would the PC-2000/PB-2000 be enough of an upgrade over the old PB-10? I'm wanting to play lower without straining like my single (*sob, rest in peace to my other PB-10) PB-10 so much, and while it does great in that small of a room, I want to have more breathing room and go lower. Since I'm not using that setup to review or do any CRITICAL listening, I haven't pushed the need to upgrade, but once that second sub died (I had them stacked for extra gain) I've noticed its deficiencies since I've been spoiled by my main system.

I am strictly DIY but clicking on our link to the right shows this option.

lol, I usually am too, you and I discussed the snot out of the Marty's and the giant horn based back when I was first building my main ones some 5 years ago or so. I just don't have the time or energy to build my own for a bedroom with a limited footprint. Putting coffins in my main room was easy. Putting one in the bedroom. The wife may cut my throat

as for the HSU, nice specs on it, but I tend to prefer ported for the output level gains

Yes agree. But we are talking about a sealed 15 verse a 10. I myself will be doing something after Xmas which will probably be a 2.1 system also. But since this is in a bedroom I will look towards just building a higher tuned cabinet. So a 25-30hz tune would be fine with a small amp.

OEM like your asking I am not too sure. Klipsch dont tend to be too expensive. I was always a Paradigm fan but I will just sit back to see what you come up with or others. I miss my old sunfire sub I had for a while in my bedroom. Wasnt crazy loud but did most things I wanted for a bedroom at ok levels.

Monolith 12" would take you down to super nasty lows!

I would be looking at the new Martin Logan Dynamo 1100X... A sealed 12" with some nice bells and whistles...

Given your space restraints I think a cylinder sub would be ideal wile still giving you the low end extension you want. SVS would be my first choice.

For the money, and if it were my money, I'd go with the PC-2000. That sub punches well above its weight class.

When I reviewed the 5.1 Satellite system, my recommendation was to forego the SB-1000 and go for the PC-2000 instead.

Not to take anything away from the older ISD subs... they are pretty good, but the newer PB/PC version are indeed superior and should be an improvement for you. And SVS will just flat out take care of you as far as customer service... they are second to none, that is for sure. I also understand Dr. Hsu has first class service as well... and I heard his subs on a couple of occasions... very impressed each time... so I don't think you would go wrong with either.

Curious, what did you decide on, Michael?

tesseract said:
Curious, what did you decide on, Michael?
Click to expand...

wow, I can't believe I missed the last few replies.

and this is near a year later and I never upgraded. Life got in the way (literally 2 days after we finished discussing this I had a ceiling leak that was so bad that we had to gut the room down to the studs, do mold remediation and a whole bunch of "fun" money killing things to repair the room) and I've had to live with the single PB-10 ISD for the last year.

at this point I'm getting frustrated as my bass loving nature is about fed up with the occaisional port noise (in reality the PB10 sounds great UNTIL those super deep moments (such as the mega bomb at the end of Ready Player One) and then I get port chuffing, even though I'm not hitting X-max on the driver itself) and I'm just about ready to pull the trigger. My PB-10 is ACTUALLY not bad, I just need more headroom as it's just barely pushing it past where it's comfortable. I can get some seriously ear bleeding bass out of it except for those super duper heavy scenes, and if I crank it down 4 DB's to where it has enough overhead the drop in bass just makes Mike a sad panda. So I really just need a good hefty jump in overhead

After listening around and gettting advice I'm really looking at the Monolith 12.. I almost was sold on the SVS PB-2000, but the bang for your buck with the PB 2000 doesn't seem to be AS much as the Monolith or the HSU 15...(I kind of want the Monolith 15, but that thing looks stupid overkill for a 12x14 bedroom sub and $1300 makes me hesitate). From what I gather the Monolith 12 would be a fairly big jump over the PB-10 (which is similar to the Monolith 10 from what I can tell) and be right in the sweet spot price wise, although I still would consider the PC-2000 if the differences aren't that much
Last edited: Jul 26, 2019

Nice. 20% off. I see that from monoprice.com direct every once in a while. Solid price too

Yeah, that’s a ridiculous price. You’re not going to find much better. Even a friends and family accommodation discount through Monoprice is 20%... and 600-ish bucks for the 12” is crazy bang.

Good people behind this sub’s design. They really want to make great performance something more attainable to the masses.

Based on my review and knowledge of the team... buy with confidence!

very true. at $800 I was tempted (well within reason for most companies) but $639 is just a steal. HOWEVER I may go through Monoprice direct with accomodations as Amazon charges me about $55 worth of tax.

BUUUUT. As Sonnie said, SVS is legendary for their CS and taking care of their customers, and Tony made a good point. the PC-2000 would be really good for a limited foot print I have ..so I may end up going that direction

and because I'm so indecisive, I've added the Rythmik L22 to the mix too. around that $899 price so on the high end, but dual 12 inch sealed woofers

HOWEVER, I think the Monolith 12 and PB-2000 is out. I was talking with Scott at SVS and after describing the DB levels I listen to on the system and the DB level adjustments I have to make to get the port chuffing to vanish on the PB-10, we both agreed that the Mono 12 and PB-2000 will probably get the job done, but I'd be running at the ragged edge of headroom (I calibrate my subs 7 DB's hot) ... meaning it's Monolith 15 or HSU VTF-3 MK5 time most likely
Last edited: Jul 26, 2019

That Monolith 15 is a certified monster!!

You're thinking about duals with a sub that size?

That would be brutal for sure.

Todd Anderson said:
That Monolith 15 is a certified monster!!

You're thinking about duals with a sub that size?
Click to expand...

oh sweet mother of pearl no. I don't have the location room to put duals in the room, so it's going to be the biggest and baddest I can get in the one location that the wife has allowed me to put a sub in without cutting my throat (luckily it's one of the best spots in the room FOR a sub)

Here's the deal: You get permission for one. That's called "cracking the door." Then you pull a move that a kid would shamelessly pull: drop hints that you're seriously considering getting four. Lay out your plan.

Once that goes over like a trash bag full of bricks, you dial it back to two. All of a sudden two doesn't sound so bad.

All that advice for free. It will work!

LOL!! that's how it works with guns in my house 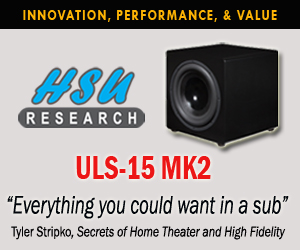