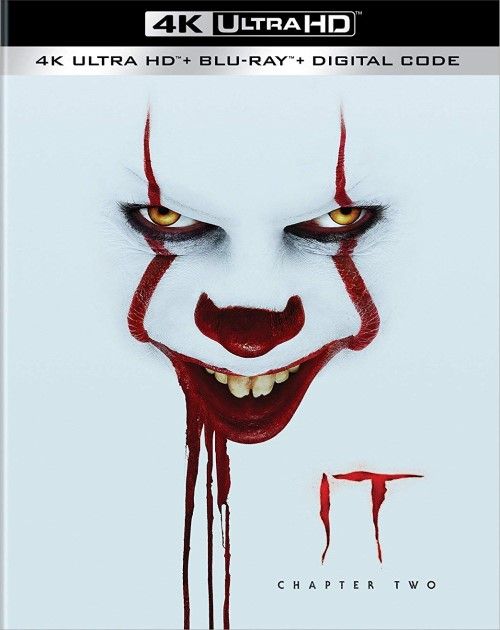 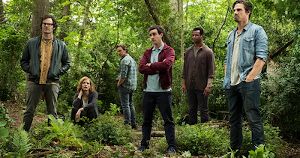 Movie
2017’s IT was a breathe of fresh air after how jaded most people are over the 1990’s IT and it’s lackluster ability to translate King’s book. Well, IT 2017 knocked it out of the part, largely in part to the fantastic acting of several new kid actors. In fact, looking back on the original film I would have to say that they carried the film quite handily, and combined with the 80s nostalgia ala Stranger Things, the movie was a blast to watch. Now, it was always known from the beginning that there were going to be TWO parts to the story, so a sequel was obviously expected. Especially since IT 2017 covered the first half of the book (which even the 1990s made for TV movie with Tim Curry never addressed), leaving the second half of the book to wrap up in IT: Chapter 2. Here’s the dicey part. The 1990s IT film covered the exact same material as this sequel. The old made for TV “meh” fest takes place right after the 2017 film, so everything we’d seen before was going to be retold in a modern light, and one where the kids have grown up, and the great performances of the afore mentioned child actor would no longer be there. End result, IT: Chapter 2 suffers a few setbacks with bloat, and the ending is just as problematic and confusing as the 1990s flick suffered from. A good movie, but not AS good as the 2017 flick.

It’s been 27 years since the “losers” took out the evil Pennywise (Bill Skarsgard) entity, and everyone has forgotten about the promise they made back then to come back if he ever resurfaced. Well, it looks like that promise is about to be tested, as kids start mysteriously vanishing once more. Pretty much all of the losers have grown up and moved on with their life, with Bill (James McAvoy as an adult) becoming a screenwriter and author who has a problem with endings, Beverly (Jessica Chastain as an adult) has married a rich snob only to be haunted with her daddy issues from her past, Richie (Bill Hader) is a successful standup comic, Ben (Jay Ryan as an adult) has shed his extra body weight, Eddie (James Ranson) is still timidly nervous of everything, and Stanley (Andy Bean) still terrified of everything in life. The only person left in Derry is Mike (Isaiah Mustafa) and it’s his job to remind everyone of the oath they made over a quarter of a century ago.

The thing is, nobody but Mike remembers anything about their past. A little side effect of having dealt with Pennywise and his child eating magical powers. However, the closer the group of friends get to Derry, the more they start to remember, and with remembrance comes the sickening knowledge that they would have to once more battle a force that almost killed them as children. To make matters worse, their group isn’t whole anymore, as Stanley commits suicide when Mike calls them to action. Now they’re a man short and children within have to dig dip and figure out a way to kill the monster COMPLETELY this time, so that no one would ever have to fight him again.
. 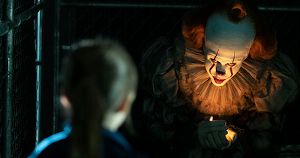 I originally thought that the kids from the first movie wouldn’t show up in their child forms, but this isn’t as “modern” of a film (in terms of screen time) as I was expecting. A good 1/3rd of the film is made up of flashbacks and transition scenes so all of the actors (and actress) of the first film gets a goodly amount of screen time. A move which makes it REALLY obvious that they were the star power and driving force of the 2017 film. I in NO way have anything against all of the massive star power that the adults brought to the screen, and love them as individual actors, but much like X-Men: Days of Future Past, the original cast just outshines everyone. That being said, McAvoy, Chastain, Hader, and everyone else do a fantastic job as older versions of their kid selves, and it’s not really anything they do that makes this film slightly lesser than its predecessor. I think it’s partially due to the same hiccups that the 1990s TV movie suffered from. Too much bloat in the flashbacks, and a difficult time really nailing the ending (much like Bill in the movie is having happen with his writers block).

The bloat is sadly actually my favorite parts of the movie if you can wrap your mind around it. Most of the heavy and sloggy sections narratively speaking are all the flashbacks to the younger versions of themselves. I LOVE the actors and the characters, but they spent so much time looking for their totems from their past that the pacing suffers just a bit. Similarly, the ending of the movie gets a bit wonky as Director Andy Muschietti bounces between supernatural, action, and a seemingly vague idea of what the villain really WAS at the end of the day. The movie itself rises above most of these faults, and is certainly a solid followup to the 2017 film, but can’t keep the momentum and incredible chemistry going from that film AS much. 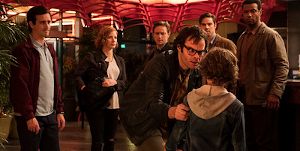 Much like the 2017 film, IT: Chapter 2 is a highly stylized film that deals in murky shadows, slightly dulled color palates, and an ever so slight hazy/gauzy look. The 2017 film suffered a bit on the 4K disc and the wildest upgrade over the Blu-ray. This time the 2K mastered film looks a good bit better than the Blu-ray, as there are more outdoor shots, and the black levels have been increased quite a bit. The film is still a bit hazy and gauzy in the darker interior shots (such as in the old run down house), but the outdoor shots look stunning this go around. There’s a light olive green/yellowed look to the flashbacks, and while the primary colors are lightly dulled, color saturation is good and the fine detail upgrades are impressive. The use of HDR doesn’t always do AS much for the colors due to having been dulled a bit, but they make great improvements to the black levels, with areas like the underground fight with Penny wise showing dramatic improvement with the deeper and more vivid shadow details that run abundant down there.

Well, the sequel is not going to be outdone by it’s predecessor in the audio department either, and it delivers the goods with a stunning sounding Dolby Atmos track (found on both the Blu-ray and the 4K UHD disc) that is just a treat to listen to. This is a jump scare movie, with tones of thundering LFE to shake the walls with horrific visuals, and a very solidly placed surround and overhead activity for the mix. There’s some nice discrete and ambient overhead placement in the creepy underground battle, as well as the house, and surrounds are pretty much at full bore with all sorts of creaks, groans, and screams, and the dialog is never drowned out despite all of the insanity going one. To put it lightly, the Dolby Atmos track is the shining jewel of this home video package, and well worth it as a fan of immersive audio.

Despite some hiccups and pacing flaws, IT: Chapter 2 is still a very fun horror movie full of scares, gore and great performances (Bill Skarsgard once again steals every scene that he’s in as Pennywise), and makes for a very enjoyable sequel to the 2017 film. Warner Brothers delivers a good 4K disc with amazing audio and a decent set of extras as well, so those who enjoyed and bought the first film, will have no problem watching or picking up this one as well. Recommended for a fun watch.