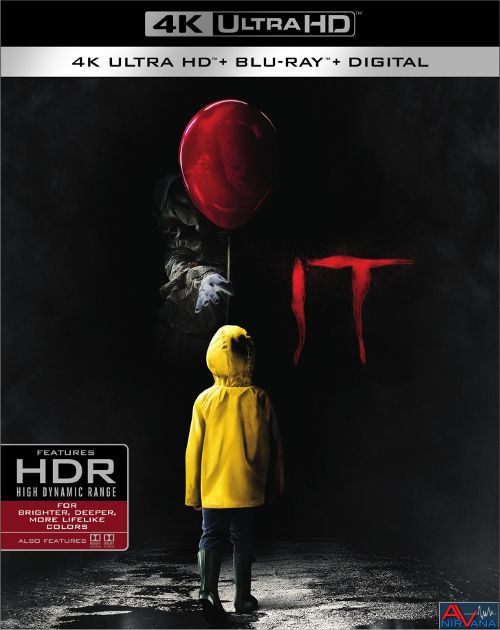 Movie
For those of us who grew up in the 80s and 90s, the 1990s version of Stephen King’s IT wasn’t really scary for ANYONE. I enjoy Stephen King’s films immensely, but IT was a made for TV movie that was heavily neutered from the book due to playing on broadcast television. It’s not that I didn’t have a fun enough time with the non-scary film, but it just doesn’t really hold up with repeat viewings. Out of all the King works on home video, I would say that the 1990s IT is the one that holds up the least (unless you’re counting the painful Dark Tower film that just came out in 2017). When it was announced that Warner was going to do a reboot of the movie for modern audiences I was curious, but also reserved in my hopefulness due to how middling the TV movie was. The production issues behind the scenes meant the movie was delayed for quite a while, and the constant casting and recasting in the pre-production had me even more nervous. However, when the first trailer dropped with Bill Skarsgard (yes, son of Stellan Skarsgard and brother to Alexander) as Pennywise, I began to get excited. There was a sense of terror to the dancing clown that wasn’t there with the Tim Curry version, and the whole move just looked “dark”. Now, I’ve been fooled by trailers before but I waited until it came out in theaters before my horror fanatic buddy and I decided to hit it up for a late night watch. Color me pink as a ballerina's tutu and put a bright red clown’s nose on my face. IT was a blast!

Andy Muschietti took over the director’s chair after the previous director got canned, and he decides to keep the film much closer to the book (or at least the first portion of the book), which is a distinct advantage over the old movie. Instead of starting out with the kids giving us their pact to come back after a few decades if Pennywise returns, and then jumping ahead to when he does, IT starts out with the famous Georgie incident and progresses naturally from there (ending the film with them making the pact as kids, thus allowing for the sequel to explore the material from the 1990 film, effectively making this a prequel of sorts). We see young Bill Denbrough (Jaeden Lieberher) and his young brother Georgie (Jackson Robert Scott) making the infamous toy boat, and then merrily running it down the rain sodden streets of Derry Maine, only to be eaten by the evil clown Pennywise (which plays out much more gruesome and violently than the TV movie had the capability to display).

Fast forward to a bit later, Bill and his parents are still grieving about their lost son, but Bill is still obsessed with finding out where Georgie’s body may have ended up. His obsession fuels some conflict between himself and his friends, but ultimately leads them into investigating why so many kids have turned up missing. It seems that Derry is not a stranger to missing children, as every 27 years (as the kids discover) kids start to disappear and right now, it’s 27 years since the last rash of children vanishing. Bill and his friends ultimately realize that the mysterious clown images that they keep seeing are related and band together to try and find out WHAT happens to the kids, and if they can stop this evil once and for all.

Like the original book, this is only half of the equation. The 1990s film focused on the second half of the book when they were adults, but this version if IT starts at the beginning, and allows for a sequel to go where the made for TV went. As you noticed, I only gave a brief “idea” of what happens in the film, and that is done on purpose. IT has always been a film about relationships and mystery, and spoiling some of the surprises is a disservice to the film. Like usual, we have the standard crew. Bill, chubby new kid Ben, Tomboy Beverly (that all the guys have a crush on), Richie, Mike, Eddie, and Stanley. Each of them have their own distinct personalities, and each one has a weakness that Pennywise tries to exploit. With Mike it has to do with him watching his parents die in a fire, while Ben has Georgie’s disappearance as his Achilles's heel. Beverly is actually fleshed out MUCH more than she ever has been before, and there is a wicked twist to her melancholy nature (one which is chillingly depicted through subtle cues from her father, and ends gloriously). One by one Pennywise gets to the children, drawing them down to his lair, and its only a matter of time before one of them comes out on top.

I honestly didn’t expect to laugh as much as I did with IT. That’s not to say that the movie is a comedy, but the children’s interactions is hilariously good natured, despite the horrific circumstances. A couple of the children’s interactions are flat out funny as can be, especially with the classic 1980s “your mom” type jokes that the children engage in (I’m usually not a fan of juvenile humor like that in my horror films, but if you can remember how you used to be as a 12-14 year old boy, then it fits PERFECTLY into the scenario). Even Pennywise manages to garner a few creepy chuckles, but even then. They’re VERY darkly humorous.

As the film went on I began to realize that this was NOT going to cover the whole book like I originally thought. Instead my suspicions were confirmed the longer the movie went on without a confrontation with the evil clown. This was going to end us RIGHT where the TV movie started, and it was done marvelously. The first half of the book was completely self contained, and so is the movie. But it leaves you with the knowledge that yes, Pennywise IS coming back in 27 years, and sets up the sequel with room to spare.

Rated R for violence/horror, bloody images, and for language

The 4K UHD disc for IT comes with both Dolby Vision and HDR 10 to enjoy, and while I was able to A/B the effects on a secondary display, I have to begrudgingly say that this is one where the DV actually outshines the HDR 10 by a little bit. The Blu-ray for IT was a good looking Blu-ray, but it had some problems due to the low lighting that kept it from being truly reference. The 4K upgrade takes it up a notch and really clears some of those issues up. The black levels were my first complaint, and the 2160p image really shines here. You can actually detect different gradients and changes in the shadow textures, and watch certain ones actually overlap each other. Watch when the kids go into the room of evil clowns and look at how the dim lighting plays with shadows of each one. You can actually see individual shapes and shadows move around each other and sometimes cross over. The greying out is gone and the blacks show a deep inkiness, ESPECIALLY with DV enabled (the blacks were actually noticeably deeper and showed better contrast than the HDR 10 did). Contrast levels are fantastic, and even though the movie has highly stylized sunlight sequences, everything is crisp and clear as can be. The second major advancement (well, besides increased clarity all around) is with the colors. The film is mainly dark shots with bright splashes of color here and there due to the stylized nature of the flick, but the end shot really shines in Pennywise’s lair. The rusty hair and bright red balloons look deeper and richer, and Georgie’s banana colored raincoat is startling sharp and bright. An overall excellent looking upgrade from 1080p to 2160p.

Let me tell you this, the Atmos track is amazing. The film starts out with a raging thunderstorm outside that really is incredibly immersive. The surrounds and overheads are engaged right form the beginning of the movie, allowing you to hear the raindrops hitting from above and all around the listening position. Footsteps echo eerily down hallways, and the LFE is simply punishing. Doors slam shut with the weight of a castle drawbridge, and the crashes of thunder will lift you out of your seat. Vocals are crisp and clean as can be, with everything from Pennywise’s cackling whisper perfectly intelligible, down to his screaming at the top of his lungs in his underground lair. Other demonic sounds like the growling of the beast, or the laughter of little dolls is creepy as can be, and the directional shifts are superb. This is easily one of THE best Atmos tracks that I’ve heard in recent months. I have raved about quite a few 5/5 tracks recently, but this one takes the cake.

• Pennywise Lives! - Discover how Bill Skarsgård prepared to portray the primordial creature known as Pennywise the Dancing Clown
• The Losers’ Club - Get up close and personal with the teenage stars of “IT” as they bond together during the production,
• Author of Fear - Stephen King reveals the roots of his best-selling novel, the nature of childhood fear and how he created his most famous monster, Pennywise
• Deleted Scenes – Eleven deleted or extended scenes from the film

IT was the surprise horror film of the year for me, and I absolutely loved the movie. The film is expertly directed, but the actors themselves are what give it the added boost to becoming great. Skarsgard is chilling as the evil clown Pennywise, and actually outshines Tim Curry (something I didn’t think was possible). The 1980s setting and interaction with the kids is like a blending of Stranger Things and traditional Stephen King, which adds to the charm of the film (also making it so that 27 years later will be right about modern times). Warner’s 4K UHD is a nice upgrade over the Blu-ray, with the same stunning video and reference quality audio. For those wondering about the upgrade to 4K, it is a solid uptick over the 1080p Blu-ray, and I once again have to give the nod to this version.

Thanks for the review. Yeah, this is a must watch. I agree.

I’m conflicted on this one on whether I want to rent it first or just add it to the collection.

I loved this one. I watched it during the theatrical run and thoroughly enjoyed it. Although it looked like a muddied mess, I knew it would look worlds better in my own home. After getting it this week, I've watched it twice and each time it's gotten better and better.

I think I’ll just skip the rental and buy it. Too much love being thrown at It. See what I did there?

I have a friend with a TCL p607. I took it over to his house to compare the differences (I calibrated his display for him so he lets me do these little experiments)
You must log in or register to reply here.
Share:
Facebook Twitter Reddit Pinterest Tumblr WhatsApp Email Link