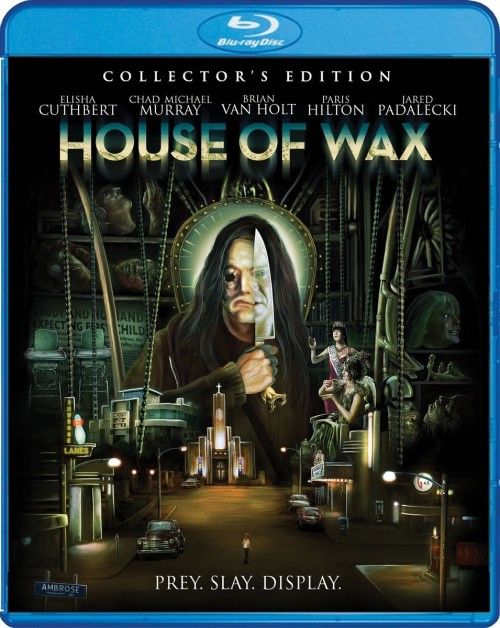 Movie
Dark Castle Entertainment did a rash of remakes back in the very late 90s to early 2000s, pumping out nearly a little over a dozen horror films and remakes of classic horror films (the name Dark Castle Entertainment is taken from the name of William Castle, a big time horror filmmaker of the 1950s and 60s) with varying degrees of success. Some of them were really cheesy and grungy, while others are actually really clever and exciting. House of Wax (a remake of a 1953 Vincent Price movie of the same name, which is actually a remake of a 1933 film titles Mystery of the Wax Museum) and is one of the middle of the road releases from the studio. It’s one of those remakes that really didn’t need to exist, but is actually entertaining enough in it’s own right to pull off making the 2 hour run time worth it.

Heading out to catch a football game in the South, Carly (Elisha Cuthbert), her boyfriend Wade (Jared Padalecki), her brother Nick (Chad Michael Murray) and several other friends all decide to camp their way to said game. However, when the group of friends camp out in a deserted field they find a little bit more than they bargained for. A creepy stalker cuts their fan belt, forcing Carly and Wade to head into a local town that’s off the beaten path to find a replacement. There the group run into Bo (Brian Van Holt), the town’s Priest, Mechanic, and local handyman. Bo offers to get them the fan belt they need, but soon the duo learn that he’s a bit more than he seems as he captures the two of them and begins to torture and convert them into wax statues like the wrest of the town folk.

The plot of the film is pretty simple in fact. Nick and Carly have to escape from the hellish town of Ambrose and rescue their friends (if they can). All the while evading Bo and his mysterious brother Vincent, who are bound and determined to turn them into wax statues (the whole town seems to be made of wax in fact) in some sort of sick and twisted game that’s gone wrong. We’ve seen these types of films before. Stuff like Texas Chainsaw Massacre, but what makes House of Wax so special compared to some of Dark Horse Entertainment other attempts is that director Jaume Collet-Serra really sells the macabre world of wax with it’s visuals and sickening transformations. The film itself has nothing to do with the Vincent Price 1953 film in anything but name and the fact that there is a wax museum, but this works to the film’s advantage. Jaume Collet-Serra just has fun with the concept of turning humans into wax statues, and makes it 10x gorier and sleazier than it could have been if he had just made a straight up remake.

The movie really has quite a few plot holes and cheesy moments (the very last “gotcha!” end moment with the big “reveal” makes you groan), but overall it’s a fun and cheesy early 2000s horror flick. It’s nasty, grungy, predictable, but completely satisfying if you like that body horror of that particular decade. It was easily one of the better films of the small studio’s lineup (13 Ghosts is still probably the best), but it’s a movie you really don’t think too hard about and when you’re dissecting the plot. Just sit back and enjoy the ride.

Rated R for horror violence, some sexual content and language

One of the initial Blu-ray releases back in 2006 during Blu-ray’s VERY first outings on high-def (and subsequently put on HD-DVD as well), House of Wax suffered from a very basic transfer that barely looked better than the DVD. It was dated back in 2006 as one of the more mediocre looking HD films released on the new format, and it looks pretty horrid today as well. However, Scream Factory has re-released the film on this special edition disc with what is described as “a 2K restoration from an interpositive” which looks a WHOLE lot better. The film was always grungy and sallow looking due to the film maker’s stylistic choices, but he detail levels are actually rather good this time around. Facial nuances are natural and clean, but the film was given a very sallow yellow/gray tinge that is very “waxy” in coloring (most likely intentional). This can make skin tones a bit flat and muted, and the darker scenes inside the house of wax can sometimes get some milky black levels. All in all it’s a rather solid looking remaster, and it certainly looks better than the horrid Warner Brothers release from 15 years ago.

The single 5.1 DTS-HD MA track (for some weird reason Scream Factory didn’t include their typical 2.0 DTS-HD MA downmix as well like they usually do) is about on par with the video. It’s good, but never really GREAT. The dialog is well placed and clear as a bell, and the creepy score really fills out the surrounds and mains as the teenagers try to make their escape from the hellish town of Ambrose. It’s not very bassy of a film at all, and during the first 20 minutes of the film I barely saw my sub lights flicker. However, the score and several explosive moments keep them active enough to be engaging throughout the rest of the film. Solid mix, maybe not THE most exciting mix in the world, but it checks off enough boxes to make most people happy.

I used to hate House of Wax 2005 a LOOOOT and jokingly say that I’d only watch it to see Paris Hilton get killed. But as I’ve gotten older I kind of appreciate the movie for what it is. It took the concept of the 1953 original and went a completely different direction. Not to mention it fits right in with those late 90s/early 2000 era grunge horror remakes like Texas Chainsaw Massacre, Ghost Ship and House on Haunted Hill. None of them are masterpieces, but they’re fun for cheap and sleazy horror with a bit of a worn out “redneck” terror to them. The new Scream Factory release may not be PERFECT, but they have done a good job of revitalizing a horrible video and audio encode from Warner brothers, and packed on some new extras to boot. Worth a fun watch if you’re into that early 2000s horror.

Thank you for the review. I saw this years ago and was quite impressed. Most remakes don't do well.