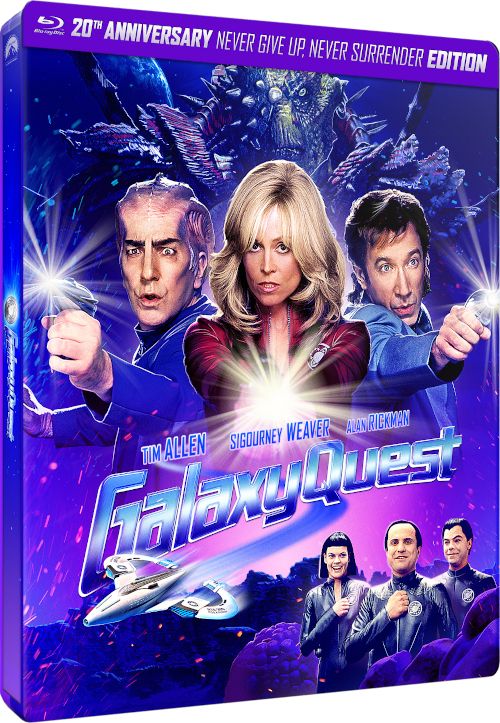 Movie
All of these anniversary editions of some of my favorite films are really throwing me for a loop and making me come to grips with my own age. 20 years ago we were blessed to have one of the most fun family friendly Star Trek lampoons of our time (hey, I was an 18 year old trekkie when this came out, and it’s still my favorite lampoon of the genre), and that means that I’m 38 year old…. Yeahhhhhhhhh. Soooo, after I read the press release and quickly grabbed a beer to cover up the wounds of realizing that I’m nearing 40 years old and that my childhood is gone for good, I immediately hopped down and turned the projector on so I could watch this gem.

20 years later and the film is just as funny as when I was an 18 year old nerd arguing about whether Star Trek: Deep Space Nine or Babylon 5 was the best sci-fi ever created (I was introduced to Farscape 6 months later, which would become the magnum opus of my sci-fi TV show love), and really is even funnier today as an adult. Being that I have a wife who works in the Sci-fi Convention industry, and I’ve tagged along to more than my fair share of them over the years, the subtle humor and jabs at said industry is much funnier, and soooo much more intricate than I remembered.

The ONE thing that makes lampoons of popular movies/shows/cultures so difficult is deciding just how much fun they’re going to make of the source, and how serious they’re going to take it as well. Lampooning is actually a very delicate balancing act, with one side poking fun at and winking at the camera about all of the silly tropes that were prevalent in whatever they’re lampooning. While the other side is trying to make the movie an actually good movie, and that requires some sort of seriousness to the project. Sure, you can make a completely slapstick film that just pokes and jabs at the source material, but the BEST ones are those that are able to make fun of themselves while they have a good time making a serious replica of what they’re lampooning, if you get my drift. In this aspect, Galaxy Quest is a near perfect attempt. It blends a huge amount of meta humor that dissects the cheesiness of those old Star Trek type sci-fi shows, as well as jabbing pointing at the convention circuit as well. Simultaneously they made an actually fun sci-fi adventure that works on its own, and actually BENEFITS form the sly jabs and satirical humor.

The basic premise of the movie is pretty simple. Back in 1982 there was a hit sci-fi show called Galaxy Quest that ran 92 episodes, before it was unceremoniously canceled. Now some 17 years later the crew is making the rounds at the local sci-fi conventions, running off of the fumes of their classic name. Most of the actors have basically given up on their lives as actors, and begrudgingly sign autographs for fans, debasing themselves for a few measly scraps compared to their heyday. The only one who’s actually enjoying himself (a bit too much) is the narcissistic Jason Nesmith (Tim Allen), who played the commander Taggart character on the show. He’s a bit of a jerk, and more than a bit selfish, and decides to take a paying gig on the side only to find out that the “gig” is actually aliens from another galaxy who have seen the earth transmissions of the Galaxy Quest TV show and think that it’s REAL. Now he and the rest of his crew have shuttled off to the other side of the galaxy to save these “Thermians” from a threat that is about to wipe them all out.

The success of Galaxy Quest hinges on two things. Clever writing, and a FANTASTIC cast. The writing is deft and agile, playing fast and loose with all of the old classic sci-fi tropes, all the while winking and nodding at he audience as it indulges them in all sorts of classic tropes (such as the commander’s shirt getting ripped off at one point during a battle, or Sigourney Weaver’s “sex symbol” like character’s uniform slowly dissolving to show more and more cleavage as the movie goes on). However, the real jewel of the show is the cast. This is a star studded cast who threw themselves whole heartedly into their respective roles. Tim Allen gleefully hogs the screen as the douche bag “Comander” Taggart, while Sigourney, Alan Rickman, and Sam Rockwell embody their various tropes. Enrico Colantoni is absolutely AMAZING as Mathesar, the Thermian leader, and there’s even various cameos from people like a VERY young Justin Long, and Rainn Wilson throughout the fim.

What really makes Galaxy Quest so special is how much it mirrors and imitates Star Trek, but never actually BECOMES it. The movie crafts it's own unique backstory and characters, while still making it very obvious who they're drawing inspiration form. The same goes with the actual people themselves. We all know that Tim Allen's Commander Taggart is James T. Kirk, Sigourney Weaver mimics Deanna Troi to a T, Alan Rickman as Worf, and so on and so forth. The series has it's finger directly on the pulse of the sci-fi world, giving them the characters and tropes that we all know and love, while never actually ripping off what came before it. Instead it crafts its own world, it's own motivations, and the characters really thrive on being mirror images, while still having enough unique properties to make them stand out on their own. In this respect, Galaxy Quest really is the perfect sci-fi lampoon.

Rated PG for some action violence, mild language and sensuality

The same video encode for this new 20th Anniversary Edition is present from the 2009 disc, and that means the same solid, but visually dull, looking transfer. The 2.35:1 framed image is certainly clean and impressive looking in most aspects, but there’s a few opening shots that really do look hazy and soft (such as the opening bits at the convention). However, once Nesmith goes up to the Protector II things clear up nicely. Colors are a bit bland and not overly saturated, but their presence is solid enough, with very little artifacting and decent saturation. There’s a few issues with aliasing around a few heads (Missi Pyle when she walk in to the transport sequence is an obvious on), and some mild digital noise, but otherwise this is a very stable transfer that’s held up well over the last decade.

As with the video, the 5.1 Dolby TrueHD track is ported over from the decade old release as well. The track is a bit front heavy for the first opening shots of the movie, but once they get into space and start battling it out things go to warp speed in a hurry. The constant lazer blasts and “swooshing” through space activate the surrounds quite a bit, and while the bass is a bit laid back compared to modern sci-fi movies, there’s some good bumps and rumbles throughout the film (such as the rock monster, or the end battle with Sarris). It’s a goodly mix, and definitely does quite well for itself, but fans of more modern, heavy duty, action/sci-fi films will notice that it’s not AS aggressive as it could bit.

• Galactopedia—On-screen information about characters, ships, aliens and more
• Historical Documents: The Story of Galaxy Quest—Cast and filmmakers discuss how the film came together
• Never Give Up, Never Surrender: The Intrepid Crew of the NSEA Protector—Celebrates the incredibly talented cast
• By Grabthar’s Hammer, What Amazing Effects—Explores the effects by ILM and Stan Winston
• Alien School—Creating the Thermian Race—Actor Enrico Colantoni’s process of developing the voice and manner of an alien race
• Actors in Space—Delves into the psyche of the cast
• Sigourney Weaver Raps— Needs no further explanation
• Deleted Scenes
• Theatrical Trailer

Now, the one thing you’re wondering is, what is different about this release vs. the one from 10 years ago? Well, almost nothing. This is actually the SAME disc (down to the silk screening and the production pressing date if you put the BD in a BD drive on the computer), with the same extras, same video encode, and same audio. The only real difference is that this Blu-ray is a steelbook collector’s edition packaging that is only available at Best Buy. As such, if you already have the Blu-ray release from 10 year ago and the collectible packaging doesn’t appeal to you, then you can keep what you have. But if you’re a steelbook fan and/or have never picked up the movie before, then this is a classy looking set that will do just fine. Either way, the movie itself is a fantastic flick and makes for a great buy.

Thanks for the review. I greatly enjoyed this movie when it came out long time ago. I will have to get this one..

LOL I still have a DVD of this movie that I got from a cereal box. Its a great flic and well worth adding the BlueRay to the collection

Isn't this the best Star Trek movie ever released?

You know, they should really do a sequel.

mechman said:
You know, they should really do a sequel.