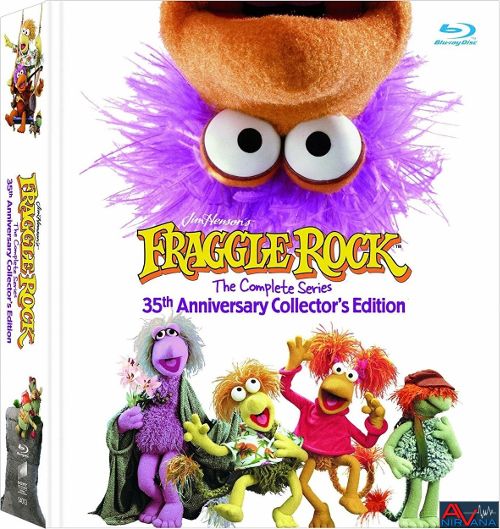 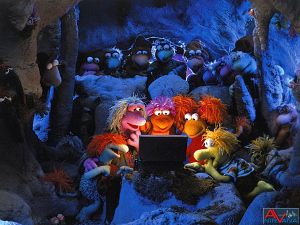 Movie
If you’ve been alive more than 10 years you’re probably acquainted with Jim Henson and The Muppets show (or at least the movies). The Muppets was one of the most highly successful live action/puppet endeavors of all time, and Henson’s legacy is unparalleled. His work on Sesame Street and The Muppets put him on the map, but there is one other TV show that’s a little less well known (although just as excellent as his previous works) that is a must own for any Henson fan. After The Muppet Show ended in 1981, Hensen moved on to create another puppet master show about a group of beings living in hiding named Fraggle Rock. Running from 1983 to 1987 on HBO (yes, before we got Game of Thrones, nudity and lots of adult entertainment, HBO was home to several family shows) Fraggle Rock became one of the most beloved 80s chidlren’s shows out there, and previously thought impossible to bring to Blu-ray, as the series was shot on 480i NTSC tape rather than film. Well, Sony has gone back to the sources and supposedly done as much work as they humanely could to eek out every little bit of quality for a Blu-ray release of the show, complete with a really classy looking digibook packaging (I’m not usually a fan of digibooks, but this one looks AMAZING up close).

Doc (Gerard Parkes) and his dog sprocket have moved into a new place, only to find out that a magical hole in the wall leads to another realm (ish) which is infested by a group of beings known as Fraggles (well, and the tiny Doozers and the gigantic Gorgs, but MOSTLY the lovable Fraggles) who love to sing, dance and make merry. What ensues is a very lightly serialized show that has child like fun as Boober, Gobo, Mokey and the rest of the Fraggle Rock beings explore the fantastical world of “outer space” (e.g., our world), and learn life lessons along the way.

Fraggle Rock is not something you can describe with conventional summary as it is much more like The Muppet Show or Sesame Street in nature, just on a bigger production level on a premium cable channel. It was back in the time when The Dark Crystal and other Henson movies were making large waves in theaters, and for those who wanted to continue the magic of Henson in their homes they could, as long as they had HBO (which was one of the biggest and most accessible cable channels of the 80s). As a child I grew up with Fraggle Rock McDonalds toys, coloring books, and even little plush squishy toys from Sears. I never actually WATCHED the show on HBO (we were too broke to afford cable back then), and my formative years were just as the show ended, so re-runs on NBC and old VHS tapes that my aunt would record for us was the way I was introduced to the show. 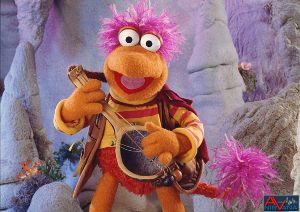 The series is not AS iconic as Sesame Street, and didn’t reinvent itself for modern sensibilities like The Muppets, but Fraggle Rock is an incredibly fun piece of 80s nostalgia that is hilariously fun to watch even in modern days. Naturally it’s geared for young kids (even more so than The Muppets), and my enjoyment is more nostalgia based. However, the show still works to entertain children of this generation too, as the humor is some of the same that we see in kids shows today. The production values were incredibly high for the 80s, and it holds its own with the likes of modern day PBS shows. Not to mention the voice acting is superb.

This new boxset is fantastic on most points (besides the video, which I will get into in the video score section with more depth), and it comes with an incredibly well done digibook. The digibook sleeves are usually a source of concern for me (I don’t like the discs pressing up against cardboard, as they’re harder to pull out that way), but the individual flaps have some awesome art work from the show on each one, and it comes with a little booklet worth of facts and info that is well work looking at if you’re a fan. Sadly the show had a few edits due to copyright issues, such as the live action wraparounds being missing, but overall this is a well done set that fans of 80s Jim Hensen should NOT pass up. 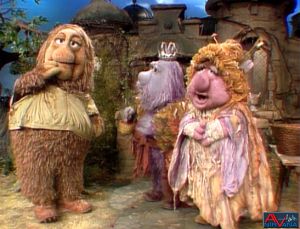 Fraggle Rock was always going to be a tough sell for high definition. The series was shot on 480i NTSC tapes back in the 1980s, which means you basically can’t get blood from a turnip. There’s only so much information on those tapes, and upconverting to 1080i (which is what the discs are, despite the packaging claiming 1080p). There’s some good, and there’s some bad in this presentation. The good is that Sony went back to the original tapes and tried to clean them up as best they could, and even though it’s an upconvert there is some definite improvements over the DVDs. The compression is nowhere near as strong, and the colors are richer and warmer. The DVDs always had a dim and muted look that is much more vibrant and strong on the Blu-rays. Also the show has not been cropped for widescreen like the re-runs have been lately. They’re all present in their original 1.33:1 aspect ratios. The bad is exactly as I described. You can’t get blood from a turnip. The detail levels aren’t the greatest in the world, and the smearing of 480i tapes is present throughout the show. The 3 star rating is SLIGHTLY generous, but I couldn’t bear to give it a 2.5/5 star rating simply because there are some nice improvements over the DVD in terms of color details and lack of compression artifacts. This really isn’t a case of a bad encode, or bad anything really. Back in 1983 480i tapes were the norm, and we just don’t have that much more information to eek out of those tapes, even with more modern encoding and clean up methods. 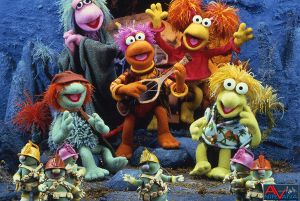 While the video has some definite source limitations, the 2.0 DTS-HD MA audio mix for the show has gone under significant restoration and the results are amazing. The series is not going to be a power house mix due to being a 2.0 kids show from the 80s, but the fidelity is amazing. Crystal clear vocals and the longs just flow effortlessly in the dual channel setup. In all honesty, if I didn’t know any better I would assume the track was recorded just a few years ago, as the DTS-HD MA track is devoid of crackling, hisses and other abnormalities that I would have expected from a show of this age and level of recording quality. I’m duly impressed. 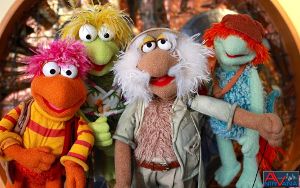 • FULLY REMASTERED FOR BLU-RAY
• NEW Fraggle Music Celebration
- Celebrate your favorite Fraggle songs with sing-alongs for every episode or hit shuffle and let the Fraggles choose for you!
• NEW Life on Set: Moments with Jim Henson
• NEW 1993 "The Today Show" Segment featuring Uncle Travelling Matt
• Down at Fraggle Rock: Behind the Scenes (48-minute version)
• Fraggle Songs & Doozer Music
• Interviews with Fraggle Rock Creators and Puppeteers
• Seasons 2, 3 and 4 Overviews
• Docs and Sprockets
• "All Around the World" Music Video
• Travelling Matt
• 20 Travelling Matt Segments
• Special Tribute to Jerry Juhl
• Scared Silly: Art Imitating Life
• Production Design Featurette
• Electro-Mechanical Puppetry
• Doozer Design
• How the Trash Heap Came to Be
• Gorg Design
• Interviews with Michael Frith, Kathy Mullen and Gerry Parkes
• HBO Promos
• You Cannot Leave the Magic: Excerpts from the Last Day of Shooting
• Dance Your Cares Away: The Evolution of the Theme Song
• The Inner Gorg: An Interview with the Performers Inside the Costumes
• Let the Music Play: An Interview with Phil Balsam and Dennis Lee
• Celebrating Fraggle Rock: Excerpts from the Wrap Party
• Designing the Puppets: An Interview with the Puppet Makers
• Directing the Fraggles: An Interview with Eric Till and George Bloomfield
• Additional Interviews:
- Dennis Lee with Mokey
- Jerry Juhl with Gobo
- Jocelyn Stevenson with Red and Mokey
- Faz Fazakas with Cotterpin Doozer
- A Minute with Travelling Matt

Fraggle Rock is an iconic bit of HBO and Hensen entertainment, and this set is packed to the gills with goodness. All of the extras from the old DVD box are transported across, as well as a bunch of new features, AND the animated Fraggle Rock TV show as well (and it’s associated special features), all housed in a massive 12 disc set. ALLL of this coming in at under $50! My only complaint is that the video is not really up to HD par, but that is not a complaint against Sony as the 480i NTSC tapes can only give so much information, something which can NOT be gotten around, and is more of a personal wish than a real complaint. This is a fantastic box set for sure, and Sony outdid themselves with the packaging and presentation of the discs, even with the limitations they had. A definite must watch.

Thanks for the review. This is a classic.

oh yes it is. A fantastic box set too. I'm really loving it

Being in my teens at the time this show was entertaining and was fun to watch. I really enjoyed the story line as it was as creative as any show in that era could be. It available on CBC up in Canada so even if you only had peasant vision you could watch the show. Jim Henson will be missed as his contribution to the entertainment industry was huge.

Tony V. said:
Being in my teens at the time this show was entertaining and was fun to watch. I really enjoyed the story line as it was as creative as any show in that era could be. It available on CBC up in Canada so even if you only had peasant vision you could watch the show. Jim Henson will be missed as his contribution to the entertainment industry was huge.
Click to expand...

in all honesty, Jim Henson was a massive influence on modern puppet based films/TV. He's been copied and copied and copied a billion times over, and his techniques were revolutionary at the times. His son, Brian, has also done an incredible work with them as well. Farscape was a huge SyFy (Sci-Fi back in the day) venture and one of the best uses of the technology in a non "kiddy" environment
You must log in or register to reply here.
Share:
Facebook Twitter Reddit Pinterest Tumblr WhatsApp Email Link