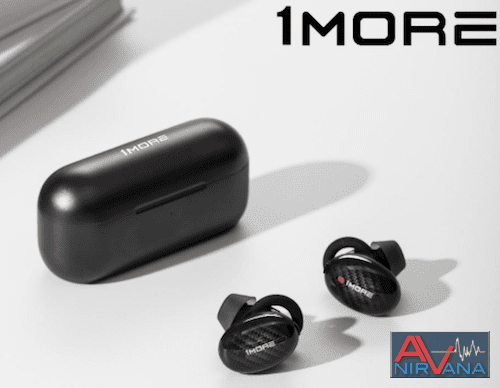 (January 8, 2020) 1MORE might not be a name that rolls off the tongue with weighted familiarity but don’t let that be a deterrent. The brand has found tremendous success over the last four years, having shipped 38 million headphones to more than 25 countries around the globe. Today, 1MORE threw its hat into the wireless earbud market, unveiling a direct competitor to Apple’s AirPod Pro earbuds.

The new Ture Wireless In-Ear headphones with Bluetooth 5.0 (aptX and AAC compatible) is designed to operate much like Apple’s wildly popular AirPods, right down to the inclusion of a portable charging case. 1MORE, however, has amped up its new model with a look that’s less dangly than Apple’s design and its pending THX Certification.

Sound quality, two levels of active noise cancellation, and an exterior sound pass-through mode are orchestrated by dual-driver technology. This array features one dynamic driver and one balanced armature that works in conjunction with a single feedforward mic and feedback mic for a complete audio experience. Additionally, one earbud has a multi-function button for control over noise cancellation, content playback, phone calls, and voice assistance.

The True Wireless ANC In-Ear Headphones carry a price tag of $199 and are set to begin shipping on January 28, 2020.

If they sound as good as they should be, they will sell. Apple airpod is just too expensive.
G

There are so many wireless in-hear headphones that support Bluetooth 5.0 and AptX for less than $100. I've been thinking about buying a pair since I am getting tired of the wires when listening to music on my iPhone via Tidal.
You must log in or register to reply here.
Share:
Facebook Twitter Reddit Pinterest Tumblr WhatsApp Email Link