Batman Beyond: The Complete Series 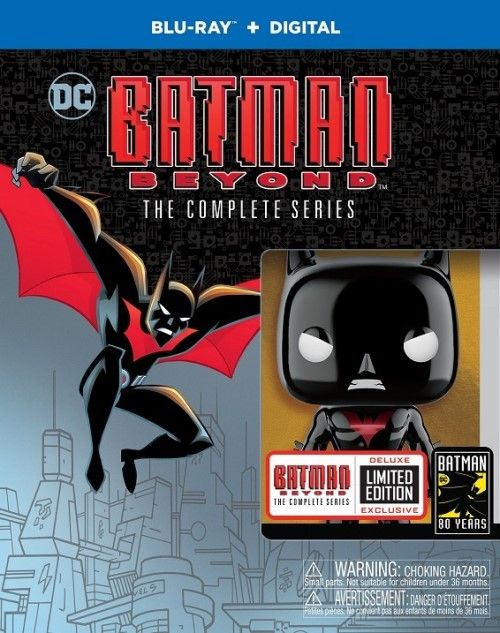 Movie
Last year brought us one of the biggest American animated coups of all time (or at least for this kid who grew up in the 90s as a teenager) with Warner’s release of Batman: The Animated Series on Blu-ray. As a huge fan of that iconic show, it was a moment that I completely nerded out over and have watched the series at least twice since last year alone. The 90s had some of the last true greats of animated shows along with others like Superman: The Animated Series, Gargoyles, Spiderman: The Animated Series (cummon Disney! Get off your rears and release it, even on DVD!) and finally, Batman Beyond.

I’ll admit, when I heard that they were going to do a futuristic Batman right after Batman: The Animated Series had ended, I was a little skeptical. Batman: The Animated Series (shortened to BTAS for the rest of this review for simplicity’s sake) was a really REALLY great animated show, and making another show about a Batman who’s NOT Bruce Wayne, especially in a cyberpunk futuristic environment, was something I thought was going to fail miserably. Boy did I have to eat some crow, as Batman Beyond turned out to just about rival BTAS in not only popularity, but quality as well. Young Will Friedle voiced the new Batman, and while everyone always fanboys over Kevin Conroy (don’t worry, I do too. I’m literally stoked as all get out to see him in the Crisis on Infinite Earths crossover coming in next year’s The CW live action shows) Friedle actually did such an excellent job that he was the perfect foil for Kevin Conroy’s old man Bruce Wayne in the show. The series modernized much about Batman, kind of like the 2099 comics did for Spiderman back around that time.

Ironically the show’s pilot episode begins in 2019, where an aging Batman (Kevin Conroy) realizes that he has to retire as his heart condition is making him a liability in his crime fighting. He’s pushed himself past his limits and his old crime fighting allies are pretty much dead or no longer with him. He’s in a new world and it’s not something he can punch his way through anymore. Fast forward 20 years and we meet Terry McGinnis (Will Friedle) a high schooler with an attitude problem. The city is full of scumbags much like it was in our time, and while the old classic villains are gone, new ones have taken their place. The Jokers (a street gang modeling themselves after THE Joker) are tearing the city up, and Wayne Enterprises has merged with Dick Powers industries, with Bruce Wayne living the remainder of his life up in in Wayne Manor. 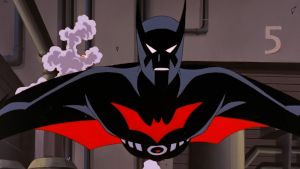 When Powers creates a nerve toxin to sell to the highest bidder, Terry’s father gets murdered for knowing just a little bit TOO much. However, while Mr. McGinnis is being killed, Terry is off painting the town red, where he ends up in a confrontation with the Jokers, only to be rescued by a still combat able Bruce Wayne. Accidentally discovering the old man’s secret and summarily kicked out of Wayne manor, Terry goes home to find out that his father has been murdered, and the only clue he has is a disc his father had hidden away that proves that Dick Powers was using Wayne-Powers Enterprises to create biological weapons. Grabbing the suit and doing the job himself, Terry proves to be a capable fighter, prompting Wayne to realize that Batman is never truly dead when you have someone with the same spirit inside the suit.

Running 52 episodes and 3 seasons, Batman Beyond really runs with the concept of a futuristic Batman. Terry’s new black and red suit is highly enhanced, with strength modifiers, a gliding capability, as well as jet powered in the feet. However, it’s not the suit that makes the man, but what he does that defines him (yes, I shamelessly stole that), and this is where the show shines. Terry is not another clone of Bruce Wayne. Sure, he’s got some of the same anger issues and wicked humor that made Batman so good, but he’s NOT the brooding Dark Knight. Terry is hopeful and energetic, adding life and a different change of pace to the classic character. It also helps that he’s not actually a re imagining of Bruce either, he’s a successor and Kevin Conroy uses his rasping voice to make the old Batman still live on, even if it’s in the shape of an old man who’s still clinging to his past.

Probably one of the best aspects of the series is Bruce and Terry’s relationship. The two are so incredibly different in many ways, yet so similar in others. The classic tale of losing a parent to criminals bonds them at first, but the two really learn from each other over the course of the series. Terry is a young whipper snapper like Dick Grayson or some of the other Robins who needs training, but he also acts a counter balance to Bruce’s Darkness. Bruce is still pretty much the same stoic Dark Knight, but Terry’s zest for life and constant hopefulness begins to wear off on the old man, finally allowing him to start to enjoy life once more, and lose some of the hangups he had back in his younger days. It’s a fascinating dynamic, and while I will always consider Bruce Wayne to be THE Batman, Terry does an incredible job. 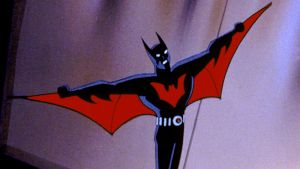 Batman Beyond: The Complete Series

To copy from the press release,

Of the 52 original Batman Beyond episodes, 41 have been fully-remastered from either their original 35mm film source or the uncommon format “OCND,” the original camera negative digital (a digital scan of original negative). Lines and resolution have been enhanced, and dust and dirt have been removed – however, cell dirt remains to not disturb the original picture. Included in the remastering was the removal of grain, resulting in enhanced colors. The remastering process does cause a slight aspect ratio change (approximately 3% loss of screen image).

Due to time-worn irreparable damage, the remaining 11 episodes were “Smart Rezzed” from standard definition Digibeta video. The process provides for significant enhanced resolution and improvement of the original source material in converting from standard to high definition, though it does sacrifice horizontal lines for clearer image and color representation. While still a marked improvement over the original video, viewers will notice a slight difference between the Remastered and the Up-Rezzed final footage. The 11 affected episodes are: “Eyewitness,” “Final Cut,” “The Last Resort,” “Armory,” “Sneak Peek,” “The Eggbaby,” “Zeta,” “Plague,” “April Moon,” “Sentries of the Lost Cosmos” and “Speak No Evil.”

The 52 episode set looks absolutely amazing on Blu-ray. The old DVDs were nothing to get excited about, but I didn’t mind so much as that was all we had. They were a bit heavy on the artifacts and grungy looking, like most early 2000’s low budget animation. However this new remaster and restoration look INCREDIBLE. Warner was true to their word and lefty any print speckles or spots intact instead of scrubbing them out, but they’re fairly minimal considering how much damage the DVDs showed. Otherwise the colors really pop, and the dark city of Gotham has never been rendered better. If it weren’t for the 11 episodes that were upconverted, I’d give this a higher rating, but as it is, the set looks amazing. Those 11 episodes that were upconverted still look realy good though, and if it wasn’t for small things like line edges looking jagged, or some soft smearing of background details you’d not really know they were upconverts. I popped in the DVD to compare those 11 episodes against and they look night and day better. In fact, the entire set is just jaw dropping. There’s minor things such as the minor speckling and some animation issues, but I honestly can’t see the set looking better than it does now.

Batman Beyond: Return of the Joker

The encode for Batman Beyond: Return of the Joker is the same as the 2011 disc (even includes the same silk screening on the Blu-ray), which is in and of itself a rather good thing. The Blu-ray got a lot of anger back 8 years ago due to the fact that Warner used the open matter variant of the film to 1.33:1 in order to match the TV show’s aspect ratio instead of the 1.85;1 theatrical presentation found on the DVD. Luckily no information was LOST simply due to open matting it, but the film was always supposed to be shown as 1.85:1 in theaters, so purists would really like to get the theatrical presentation as well, but that can’t be helped now.

The Blu-ray itself looks as good as the series does, and since it was made for theaters, didn’t have the same source limitations that the TV show suffered when restoring it. The colors really pop here, with a deeper saturation and more “cartoony” look even though it’s carrying the same artists as the TV show. Lines are cleanly drawn, and neon colors really shine with good shadow detail. The animation style limits how much detail can be shown, but it’s certainly more than enough to please fans. 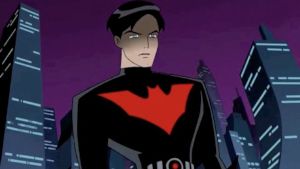 The show is given a 2.0 DTS-HD MA track (all over language tracks listed below in the specs are from Return of the Joker) and the audio mix does a nice job for what it is. I completely understand that a 2.0 track meant for TV is never going to meet the highest echelons of audio mixes, but the DTS-HD MA track does the show justice. All the action is crystal clear, and the dialog perfect. Kevin Conroy’s raspy old man Wayne voice comes through with gravitas, and Terry’s frustrated teenage antics are spot on. There’s a teensy bit of a bass cooked into the 2.0 mix, but this isn’t a 2.0 surround mix, but a stereo one, so it is limited to the front of the room with only midbass. The movie itself is a bit better, but not much. Since it was designed around the show’s ambiance, it’s a decidedly front heavy mix that only gets active in the back during the second half of the movie, and the LFE is modest. Both good mixes, both perfect for a TV show.
. 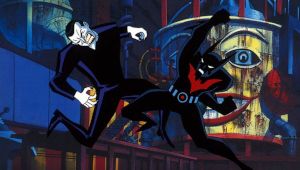 Batman Beyond is simply superb as a followup to Batman: The Animated Series as one of the best shows to come out the 90s and early 2000s. This show easily rivals it’s progenitor and almost surpasses it in some way. Will Friedle has made himself almost as iconic as Kevin Conroy has at playing a version of Batman, and Conroy’s involvement in this series only makes it better. It’s a superb show and one that I always recommend to friends who have seen Batman: The Animated Series. With both shows out on Blu-ray as well as the Justice League series a few years back, all that remains of the 90s and early 2000 classics is Superman: The Animated series (hint, hint Warner). Also, being the limited edition set it comes with a Funko Pop collectible character in the box, as well as 4 art cards and the series wrapped up in a cardboard flip case. I know it’s going to come as no surprise, but I’m putting a must own recommendation on this set.

Thanks for the review. I am a fan of the original Batman animated series so will check this out.