Audyssey delays are off according to REW impulse measurements?

After running Audyssey I am running into what I am not sure is an issue in REW or my methods. The overlay impulse graph is saying that the front LCRs are ~1ms (12in / 0.3m) closer than they should be. I am using the surround right as acoustic reference for all measurements. Also the 2 rear surrounds are saying they are 0.2ms (3in 8cm) closer than they should be. The reference itself is saying it's 0.03ms (0.5in) away, which seems like of all of them, that one should be very very close to zero.

I am running Audyssey MultEQ XT32 on my Denon an 11.1 system (with Dynamic EQ turned off for now). I am running REW 5.20.7 with a UMIK-1 with ASIO4ALL. The distance measurements Audyssey are setting are spot on when I check them. The signal path is very simple being Windows Laptop > HDMI 7.1 > Denon > Speakers.

Any ideas? Being new to this, I just want to make sure my setup (and expectations) are good before I learn more about REW for my sub riser project. 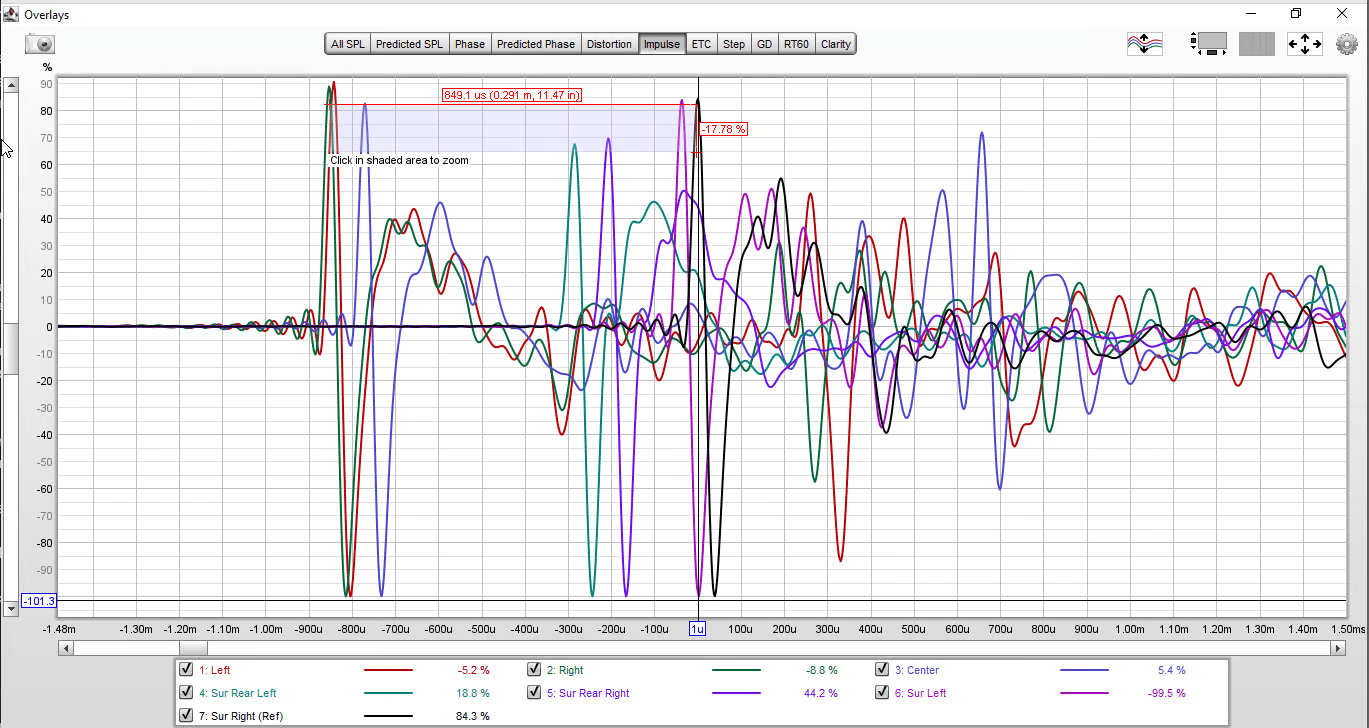 Looks normal. Hopefully the surround speaker isn't a type with multiple tweeters, as that could confuse things. The timing signal is a high frequency sweep, 5 kHz to 20 kHz, and may have slightly different arrival time to the full response of the speaker when measured, so the half inch delay for the ref isn't unusual. As an experiment you could change the ref to another speaker, e.g. front left, and remeasure the relative timing.

Thanks for the quick response John. The speakers are Triad Silver LCR for fronts and all surrounds, so just a single tweeter.

Of the many things I have experimented with (and the result is always the above graph) is changing to reference to other speakers. The results are always the same (about 1ms difference between front and rear of theater). Always measuring from the same spot at the primary middle seated position.

If you get the same relative timing with a different ref then those are the timings.

Thanks John. Yeah I agree the results must be what they are if they are consistent between references. Sure seems to be pointing to Audyssey being off in its calculations of distance (at least in my feeble mind). I can start tweaking things with Denon delays, but not convinced this is a wise or productive thing to do.

My main goal is to ensure when I start tuning subs, I know I am getting accurate results.

The differences are irrelevant for sub alignment. On a vaguely related note, this thread discusses a test that measures how high the timing difference between a bass drum and a high hat needs to be before it becomes audible.

Figured I would share this in case it meant something. For the Left speaker, it compares the default delays Audyssey set, to an adjustment I made in the AVR to bring the Left delay into alignment to the reference Surround Right. The Left+SurRight is both speakers playing at the same time before the adjustment, and Left+SurRight (aligned) is after. I guess the notable thing is the general increased SPL of the aligned one. 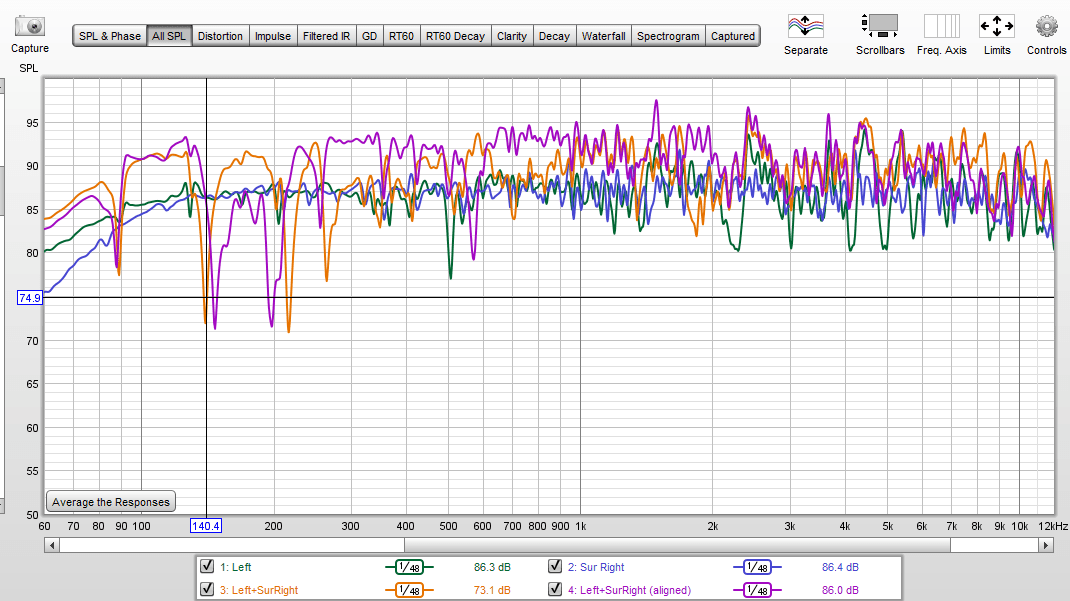 So, we've dug into this deeper, and it seems that the issue of OP's poor alignment is down to Denon using 300m/s as their speed-of-sound constant for the speaker distance UI. If you use accurate distances, measured by tape or converting measured delays using 343m/s, you get inaccurate results like OP's.

Correcting by rescaling the measured distance to allow for this 14.3% difference greatly improves things, and some versions of Audyssey like MultEQ Pro and MultEQ-X seem to be aware of this, while others are not.

Details over AVS Forum threads that I can't link to due to insufficient posts:

So no fault of REW, but it does one raise feature request.

Please can we configure the speed of sound to 300m/s to give us distance values we can enter directly into Denon AVRs? It seems that the preferences won't let me configure lower than 330m/s.

I would find this particularly useful for the time alignment tool - my last alignment showed a required delay change of -3.5ms, which I attempted by adding 1.2m as indicated, but it turns out that got me -4ms due to this issue, and I should have added 1.05m instead. Would be nice to have that shown directly in the UI.
Last edited: May 10, 2022

Must be chilly in their R&D labs, 300 m/s in air happens at about -49 C
I'll widen the range of accepted values in the next build.
S

@John Mulcahy, points of reference for the discussions mentioned by @KMO:

Audyssey time alignment is off according to REW impluse...

This still sounds a bit confused.In the first stage it measured the time it takes from the audio source to go thru the AVR to the speaker and then thru air and end up at the test mic. Then it measures all other speakers. It then continues to the next stage, where it seems to take forever to get...

In terms of wishlist, mine is: - Set a "best fit" target curve that EQs peaks and valleys still, but follows the general natural trajectory of your in room response. - Show the speaker measurement on the graph with the filter design so you're able to see how your design compares to the...

John, one of the sticking points on the SOS value in the prefs is that if 'Distance units:' is set to 'feet', the displayed value is still listed in meteres. Can that be fixed to display properly based on selection?

OK, I'll show the speed of sound preference setting in feet per second if the distance unit is set to feet.

Awesome, thanks John. These changes will help a lot. Also thanks for the original help above. It kept the discovery process pointed in the right direction.

As somebody on the AVS forum pointed out.

Distance times Denon speed of sound divided by the real speed of sound and you get the real distance. Some have said that the MultiEQ-X app accounts for the error when sending the file to the receiver. I'm going to contact Audyssey and see if that is correct.

I think running 2 subs on Denon now, I'm just going to use one output, let MiniDSP and REW time-align it, and have my Denon just consider it one sub when it does its time alignment. I was doing half and half before, but using one sub out from the receiver just makes it much simpler.

HD MOVIE SOURCE said:
I'm going to contact Audyssey and see if that is correct.
Click to expand...