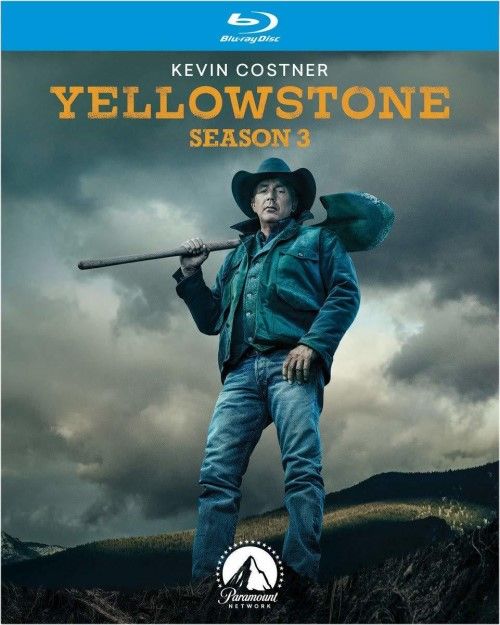 Movie
There used to a time when the use of the TV-MA symbol was nothing but for bawdy TV shows at night, or late night HBO. Stuff like Fritz the Cat or late night specials that our mom’s wouldn’t let us watch as kids. Then it became synonymous with “meant for actual adults instead of safe family friendly stuff!” like Game of Thrones, only to be over saturated in the marketplace for a while. Now it’s just another label and a simple warning of R-rated TV material, and we’re back to judging TV for it’s merits, rather than it’s ratings. Yellowstone came up on the rear edge of TV-MA’s super appeal days and was a surprise hit drama. It was gritty, dark, and while it wasn’t bathed in emo wrist cutting, was a suitable modern Western aimed directly at a more vicious appeal. The last two season have turned out to be phenomenal TV, bringing Kevin Costner back to the cowboy boots and hat as the patriarch of a generational ranch family who is under siege from modern changes (and those looking to profit off of said changes).

Last Season’s dark finale kept us on the edge of our toes, but season 3 tends to lay back and go more soap opera-ish in nature. This season’s conflict is spear headed by a Wall Street guru named Roarke (Josh Holloway) who has an eye on buying the Dutton Ranch (duh, everyone seems to want a piece of this massive ranch). He is part of a group of investors who are putting some SERIOUS force on the community (including exorbitant sums of money) to wheedle the land away from it’s owners, and you can already guess that patriarch John Dutton (Kevin Costner) is going to have nothing to do with selling his land, and that the those who are trying to wrest it away are going to have the fight of their lives.

As fun as that is, there is a downside to the show this year. I was warned about it ahead of time, but still wasn’t exactly prepared for how much of a soap opera some of the interpersonal relationships would get to be. Jamie Dutton (Wes Bentley) and Beth (Kelly Reilly have their relationship strained as Jamie starts to rethink his life, as well as some previous dirt coming to light from their pasts. Kayce (Luke Grimes) and Monica (Kelsey Asbille) have their lives in chaos as well, but the real turn of events for this season is the introduction of Roarke and his machinations to get the ranch. This is one of the better aspects of the year, as Josh Holloway gleefully throws himself into the role of the villain and does a great job. It’s the rest of the interpersonal relationships that just get overly dramatic and cheesy to the point where they feel like they’re on “Days of our Lives” instead of Yellowstone.

Now, with those negatives said, the show is still plenty entertaining for me, even though I had to slog through the center half with the relationship mumbo jumbo to get to some of the better points. Not to mention the fact that season 3 ends with a fantastic wrap up and word on the street is that season 4 is going to change things up quite a bit. I can only hope it eradicates the overly sappy and soap opera quality issues that plagued this season and get back to the meat and potatoes of the show.

Still using the same Arri Alexa cameras as the previous 2 seasons, season three of Yellowstone continues on the path of looking incredible on Blu-ray. The Montana local is rich with greenery and stunning backdrops that really makes the audience drool. Colors and flesh tones are smooth and even with a neutral hue to them. Details and background nuances are sharp and clean, and I really have nothing majorly negative to say about it. Kevin Costner's face is still craggy as ever and clothing shows off every little fiber and hair attached to them. Blacks are strong as well, and only a few instances of black crush in the indoor shots keep it from being a perfect looking image. Still great and still highly recommended.

The one thing that has always been a thing about the Blu-ray releases of Yellowstone is the generally mediocre audio mix that the show had had. It's not that the mix is BAD, it's just that it has been heavy on the talking and the track has been a bit thin in the higher regions. It's always bordered on the edge of being "not bad" and "ok, that's good", but has always been more than satisfactory, but this season kicks it up just slightly and I think edges out the previous two seasons enough for me to put a sold 4/5 rating on the audio. The track isn't AS thin as season 1, and definitely has a bit more dynamic range. Outside of that, it's still the same dialog heavy scenario that we've seen in all the previous seasons. Solid, but never gut busting.

This latest season has been the season of controversy for the show. A lot of people loved the interpersonal drama, and just as many totally hated it and wished that the show would get back to the story of corporate assault that Roarke and his crew of nasties brought to the table. I’m kind of in the middle. I see the flaws of this season, but also still had enough fun that I’m willing to overlook some of the more glaring issues that bogged down the center half of the season arc. Paramount still has top notch video for the discs, and the same rather meek audio that the show has had since the beginning. Solid enough watch, but a definite dip in the otherwise incredible series to date.

I made it through this season but lost any enthusiasm for it in the middle. The the constant Jamie whining made me glad he drowned in the giant wave on Miller’s Planet. Serves him right.

I’ll be giving season 4 a shot, but the show has spent my goodwill, so it’ll be a quick decision.

I stopped after season 2. This show gets a hard no from me.