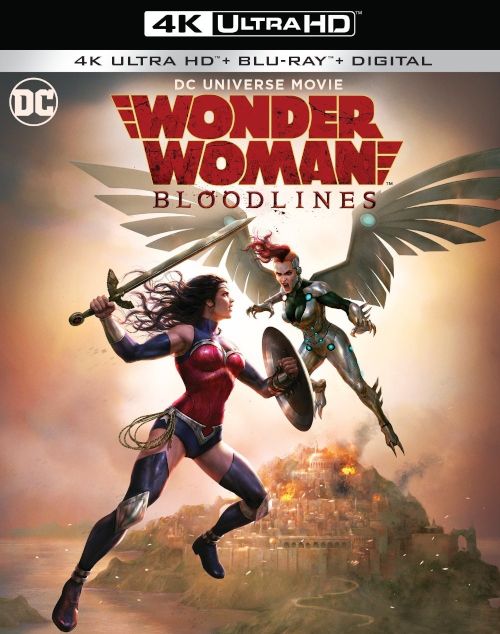 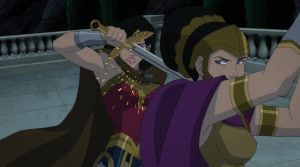 Movie
I had heard that Wonder Woman: Bloodlines was going to be based off of a short story from Neil Gaiman, but I have had no actual evidence that this was the case from my moderate researching into the title. Still, I’m a big fan of the DCAU (DC Animated Universe), and I still haven’t found a BAD movie in the batch. Most of them are quite a bit of fun to watch, and while some of them are aimed at younger audiences than others, only Superman: Doomsday has really let me down. That is until this entry. Bloodlines is NOT a bad movie by any stretch of the imagination, but it is easily one of the weaker entries into the DCAU, with a story that seems better suited for TV than a live action film, despite the use of some PG-13 language and violence.

The movie really doesn’t have anything to do with the 2009 Wonder Woman animated film, but instead decides to go back to the beginning and show us ANOTHER origin story for Diana (still played by Rosario Dawson). The typical finding of the Amazonian island is done by Steve Trevor (Jeffrey Donovan of Burn Notice), who crash lands his plane there and is captured by the Amazonian warriors. The only one to take pity on him and trust Steve to not reveal their existence is Princess Diana, who breaks him out against the Queen’s will and travels to the human world where she takes up the mantle of Wonder Woman to protect it.

While there Diana has to learn the cultures of Earth, and with the help of Dr. Julia Kapatelis (played by Nia Vardalos) and her daughter Vanessa (Marie Avgeropoulos) who is kind of struggling with her identity. Unfortunately, Vanessa is kind of ignored by her mother as she teaches Wonder Woman the intricacies of humanity, leading the malleable young teen embittered by the affections showered on Wonder Woman and not her by her own mother. Years later Vanessa facilitates the robbery of a priceless artifact that her mother dug up to criminals, only for Julia to end up dead in the fracas. Enraged and full of hate, Vanessa agrees to undergo a cybernetic treatment to turn her into a warrior known as The Silver Swan in order to take out her vengeance on Wonder Woman. The fight doesn’t exactly go as planned though, and Wonder Woman subdues her long enough to find out that the cybernetic enhancements are way outside of her league. The only place that has the technology to heal her of the implants is Diana’s own home, and that means going back to face her mother the Queen and see if she will aid them. 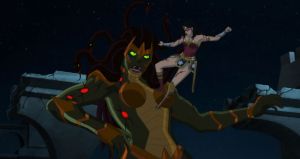 Wonder Woman: Bloodlines is a solid enough tale, but really more of a couple of TV episodes wrapped up into one story vs. an actual full length movie. The story line is a bit trite, and the ending a bit anticlimactic. The story has to be padded out a bit by adding in a battle with a minotaur they dub Ferdinand (ouch), Cheetah, and even adding in a giant sized Medusa so that Wonder Woman ACTUALLY has a credible threat (the gorgons, and Medusa in general, were always legendary enemies of the Amazons). The biggest disappointement comes in the fact that it completely ignores the canon of the other New 52 style movies, and acts as it’s own origin story once again.

I DID like that Steve takes a much more active role in her training, and actually goes on missions with her much like he did in the comics. Jeffrey Donovan is perfect as the military pilot, and I just couldn’t help but see that twinkle eyed visage of Michael Westen in there through it all. Rosario Dawson has long since been the voice of Diana/Wonder Woman, and continues on with a solid portrayal. The rest are your typical TV animated voice acting though, and it continues on with feeling like a TV movie as a result. All in all, not a bad movie, but not one of the DCAU’s best either.

Rated PG-13 for sequences of fantasy action and violence, and some bloody images.

As is typical of the Warner DCAU films that have hit 4K, the animation source keeps the 4K UHD from being jaw dropping in it’s upgrade, but instead is a more modest one that fine tunes color, clears up artifacting and tweaks to be a better version of itself. The film is rather dimly lit most of the time, but the colors are clean and sharp, and the reds and blues and greens of the main characters show through nicely. The HDR seems to deepen and enrich the base colors, but also cleans up the blacks just a bit, especially in regards to the color banding. The animation doesn’t allow really any detail upgrades over the Blu-ray as the simplistic line drawn art doesn’t have anything more to give. Still, there’s some crisper lines around Diana’s faces, as well as the backgrounds of the ancient Amazonian home grounds, which are a more nuanced and less soft to the eye. It’s a solid upgrade over the 1080p Blu-ray, but I wouldn’t go in expecting a massive jaw dropping difference simply due to the fact that the animation doesn’t allow for much more than this.

The 5.1 DTS-HD MA track is pretty typical of the Warner DCAU films, giving us a very active experience in the L/C/R channels, with the surrounds picking up some of the slack during the battles, only to slide away into the background for the rest of the movie. Dialog is crisp and cleanly located up in the center of the room, and the mains get a hefty workout with the swooshing of planes and the thundering roar of Minotaurs. The track can be pretty talky at times, meaning the focus is in the forward center of the room, but the minute the action starts the back of the room lights up with the sound of clattering stones and the plink of arrows against Medusa’s body. LFE is powerful and guttural, adding a lot of weight to the action scenes, as well as the rumble of the invisible jet.

• DC Showcase: Death (Animated Short) – Inspired by Neil Gaiman's "The Sandman," Death is produced & directed by Sam Liu (Justice League vs. The Fatal Five) and written by J.M. DeMatteis (Batman: Bad Blood). In the story, Vincent, an artist with unresolved inner demons, meets a mysterious girl who helps him come to terms with his creative legacy … and eventual death. Leonard Nam (Westworld) provides the voice of Vincent, and Jamie Chung (The Gifted, Big Hero 6) is the voice of Death. The voice cast includes Darin De Paul, Keith Szarabajka and Kari Wahlgren.
• The Cheetah: Ferocious Archenemy (New Featurette) – Ferocious. Clever. Deadly. It's the thrill of the hunt and the prey is Wonder Woman. This is the story of The Cheetah, Diana's greatest enemy.
• A Sneak Peek at the next DC Universe Movie, Superman: Red Son – An advanced look at the next animated film in the popular DC Universe Movies collection.
• 2 Episodes of Batman: The Brave and the Bold
• Trailers

I am saddened to say that I was a little bit disappointed in Wonder Woman: Bloodlines. I’ve always at least ENJOYED the weaker DC Animated Universe offerings up till now, even the ones that don’t stick to the main plot lines, but this one felt like a couple of episodes of the Justice League show in movie form. It completely ignores the happenings of the 2009 Wonder Woman animated film, and even the happenings of Justice League: War. As a standalone film it’s all right, and certainly entertaining enough if you’re a fan of the series, but sadly it stands apart as one of the weakest entries that they’ve given us yet. Audio and video are very good though, and extras more than amenable. Rental is going to be my recommendation.