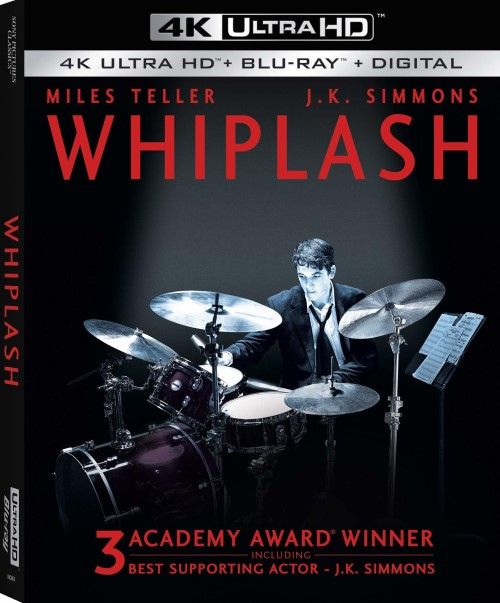 Movie
I have to guiltily admit that I never saw Whiplash until this week. I had heard great things about it during the theatrical release, but I forgot to see it in theaters. Then came the Blu-ray release and I bought it week one, only to put it on my shelf and forget about it, saying “I’ll watch it soon”. Well, soon turned into 6 years and the 4K UHD shows up on my desk. That immediately kicks me into over drive and forces me to watch both the Blu-ray and the 4K UHD to compare, and I have to say, I completely understand why this movie got lauded as such a hugely impressive film at the Academy Awards. I personally thought it looked great from the trailer, but wasn’t sure just HOW intense a drama you can make about band practice. I mean, most of us remember teasing the band members in high school, and shunning them like the theater students in college. But somehow, director/writer Damien Chazelle crafts an utterly fascinating film that keeps the audience riveted to the screen for the full hour and 46 minutes, and has you holding your breath till the very last drum note rolls.

I can see why Miles Teller was so huge 5-6 years ago. He had just released the teen drama The Spectacular Now with Shailene Woodley and after Whiplash he was touted as THE next great thing. His performance in Whiplash had him in the studio short list for every new movie they could think of, and it almost solidified him as a major power player (until he squandered it with some bad film decisions like Divergent, and the infamously bad Fantastic 4 remake). The young man exuded so much raw intensity and burning nerve like tension that I couldn’t take my eyes off of him. Co-starring against J.K. Simmons in a film like this is a tough thing as Simmons never turns in a bad performance (even when the film around him is awful), but Miles manages to eek out an incredibly visceral presentation as a talented Jazz drummer who wants to succeed at all costs.

Andrew (Miles Teller) is a first year student at the prestigious Shaffer Music Conservatory, where some of THE best musicians in the world go to study. He’s still a newbie though, and even though he has raw talent, is nowhere near making a name for himself. He’s noticed by the incredible harsh and demanding professor Fletcher (J.K. Simmons) who has the personality of an angry pit bull, and the determination of one with his jaws locked on a victim’s throat. Despite stumbling and failing at first, Andrew refuses to let the screaming antics of Fletcher deter him from realizing what HE knows in his heart is true. The truth that Andrew IS one of the best and WILL be one if it kills him.

I didn’t expect it going in, but Whiplash is a riveting film. Damien Chazelle masterfully directs the film as a conductor would. It’s subtle and quiet one moment, only to rise to massive crescendo, dip into a lull, and then suddenly drive you out of your seat with a massive onslaught of music that rips you along like a raging river. I have never felt that drained and exhilarated after a movie ends, and I wanted to watch it a second time nearly immediately (which I did to compare against the Blu-ray). Miles Teller has never been my favorite actor, and I thought he wasn’t that good in just about everything I’d seen him in. That is until I watched Whiplash. Andrew is a BEAST of a student, and watching the sheer endurance and will to excel, even in the most difficult of environments, is simply exciting. His performance is utterly raw, violent, and yet cold and calculating. Andrew knows what he has to succeed, and even though it may look like arrogance on the outside, culminates with a man coming into his own and understanding that he can truly break though his own self inflicted limitations and soar with the eagles.

Simmons is just as important to the film as Teller is, and is in fact the driving force behind Andrew. Anyone who has ever been to a higher education department knows that the best and the worst professors are the most demanding. The ones who seem like utter jack asses, but really are trying to push you to the limits and force you to drop your preconceptions. Those are the ones we remember fondly when we look at how far we’ve come in life, and in our ventures. However, there is a fine line between pushing you to be your best, and driving you like a slave, and that is EXACTLY the line that Fletcher rides on. He’s so vicious and seemingly cruel that you hate him and want him to get his just desserts, but Damien manages to make him a sympathetic villain. A man that loves his students more they know, and even though he pushes them past what is generally socially acceptable, just wants them to truly EXCEL in their musical ventures. Simmons makes Fletcher emotionally distant, yet fragile and worthy of empathy as well. It’s hard to play a character so well that you both love him and hate him at the same time, but Simmons pulls off the role flawlessly. The movie is not PERFECT (the center act drags a bit) but both Simmons and Teller turn in powerhouse performances that keep the audience glued to the screen from beginning to end.

Rated R for strong language including some sexual references

The 4K UHD disc is a nice upgrade over the 1080p Blu-ray, enhancing an already excellent disc with some fine tuning. The film was heavily stylized with a parchment colored tinge and digital noise in the darkened walls of Shaffer Conservatory. Fine details are much more clear, showing off super close up shots of blood on the hands, sweat droplets down the brow, and the vibrating and shaking of the drum skin. The Blu-ray was good, but it had a hard time resolving many of these details in the crushing darkness. The 4K UHD’s HDR allows for more natural colors, but doesn’t make them wildly over saturated. Instead it really boosts the black levels so that you can see so much clearer and with less digital noise. It’s not that the Blu-ray was BAD, it’s just that the 4K disc’s higher resolution and bitrate allows for the film’s stylistic choices to be resolved on screen better.

The Dolby Atmos track fine tunes the 5.1 DTS-HD MA mix, but really isn’t THAT much different than the Blu-ray mix. That’s not to say that the Atmos track is disappointing, but the enhancements are subtle and mostly due to the musical nature of the film. There’s no massive overhead usage, but the constant Jazz music has a light and airy tone to it that is really appealing. Sound flows all around the listener, and it still allows the dialog heavy portions of the film to be quiet and reserved when necessary. Kick drums pop with a nice deep thud, and you can hear the wooden sticks tapping on the drum skins with eerie precision and clarity. Vocals are always above reproach, and quite simply, this is a heavenly track to listen to with a lot of emphasis on the drumming (something Lars Ulrich would appreciate), with a nice crisp “pop” to the entire sound. Excellent mix.
.

Whiplash is much like Simmon’s character of Fletcher. It pushes you to the limits, hovering on the edge of too far, only to keep you in that limbo state of frantic exultation till the very end. The final scene literally pushes the audience to the rafters in ecstasy, watching the utter pain and agony over Andrews face, but still perfectly pure and perfect in the purity of the music itself. The film is a true modern classic and it makes me wonder just WHY I waited this long to actually see it. The 4K UHD disc manages to edge out the Blu-ray rather handily, with a great Atmos mix that really captures the heart of the musical immersion, and a video upgrade that handily beats out it’s 1080p counterpart. Definitely a must grab for those wanting to upgrade, or those who just want a fantastic 4K UHD disc for their collection and haven’t seen it yet. Highly recommended.

Thanks for the review. I never heard of this movie but after reading and watching the trailer, I will check it out.

Own this in both 4K and BD. Look forward to giving the 4K disc a spin... such a fabulous movie!