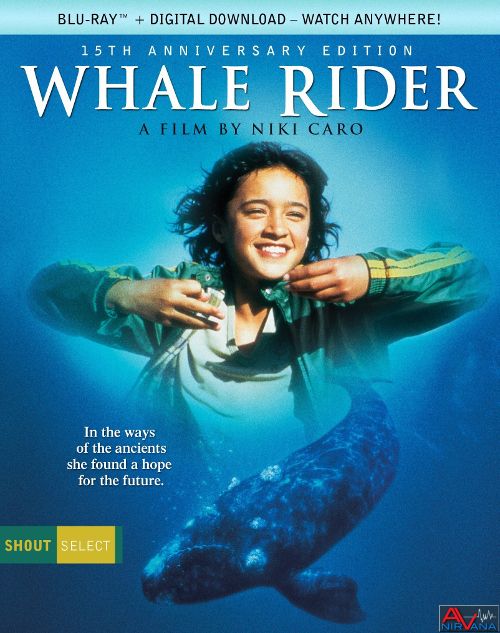 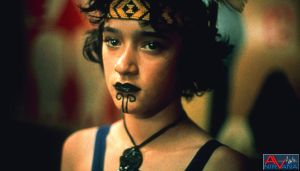 Movie
Whale Rider was director Niki Caro’s second film (The Zookeeper’s Wife), and it is EASILY her best film to date. It was a critic’s darling during the Toronto Film Festival in 2002, and still remains as one of the best films of the turn of the century. There are very few films detailing the lives of the Polynesian Maori tribesman (I did a review of Deadlands a few years back), and Whale Rider remains one of the most accessible art films out there on the subject, bypassing many other family films of the same generation and still being able to be viewed by the common man without a degree in art history. I try not to be overly gushy and overly apologetic for films that bypass the mainstream media, but Whale Rider is a truly exceptional film about Maori culture in a way that impacts you on a spiritual, sentimental, and realistic way.

Based upon the novel of the same name by Witi Ihimaera (written in 1987), Whale Rider chronicles the journey of a young Maori girl living in her native New Zealand and carrying the same name as the mythical Paikea of Maori mythology. Paikea supposedly fell off the back of a whale upon traveling to the New Zealand island thousands of years ago, and landed where New Zealand is today. After that the Maori people have had a long line of male leaders, and now the remaining descendants are living in disarray. What was once a proud Polynesian tribe of warriors like the Samoans and the Hawaiians, is now a domesticated group of people living in a modern society that seems to not care about their culture. This story follows a young girl named Paikea as well (Oscar nominated performance by Keisha Castle-Hughes) who, even though not born a boy, is one of the last descendants of that ancient bloodline.

Pai’s own grandfather Koro (Rawiri Paratene), the village chief, refuses to see her as the next in line after her father Porourangi (Cliff Curtis) abdicates his responsibility, and makes it his duty to find the next chieftain in their stumbling people. Despite being loved by her adoring grandmother (Vicky Haughton), Pai still struggles to live up to the expectations of her lineage, and the constant derision from her grandfather Koro. No matter his derision, no matter his refusal to see Pai’s love and devotion to her people, the young girl lives outside of all expectations. Grasping onto the tenants of her culture and her people, young Pai is one thing. An inspiration to all and the future for her people. 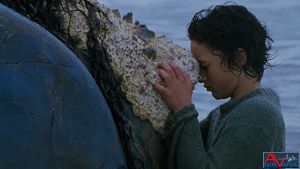 Whale Rider is not an epic tale of adventure and drama. It is a singular tale of hope and love midst a sea of prejudice and doubt. The film is inherently a mythical story about a descendant of greatness come alive to a modern age of history, but it is a story that resonates with people nonetheless. I chuckled at an ancient 2002 review that rivaled Whale Rider to an indie version of The Karate Kid, but I honestly defy anyone to fault the film for being an indie flick. Keisha Castle-Hughes gives an incredibly nuanced and heartfelt performance as Pai, struggling to find the love and acceptance of her grandfather, while also maintaining a firm belief in herself as she accepts the role that fate has dealt her.

In all reality, Whale Rider is no less special than Moana or any other tale of coming into ones own from a mythical background than any other blockbuster film. The movie is intensely moving, and has a sense of peace and tranquility that is hard to replicate. Keisha Castle-Hughes gives an incredibly moving and intense performance as Pai, and the beautiful array of Maori actors chosen for the film gives it an authentic and incredibly visceral vibe. I very rarely recommend indie films are great watches due to the lack of finesse and accessibility by the general populace, but Whale Rider manages to grasp all aspects of the task with finesse and easey.

Rated PG-13 for brief language and a momentary drug reference

Whale Rider was a film released back in 2002 on the original super 35mm film stock, and it’s given a LOVELY looking 2.35:1 AVC encoded Blu-ray for the North American release. For those who have been paying attention, the movie was released on Blu-ray in both Australia and Germany, but North America has sadly let the movie slip on by, till now. Shout Factory allows for a healthy bitrate ranging from the mid 30s to the low 40s and the resulting image is quite stunning. Cinematographer Leon Narbey has publicly stated that Whale Rider was intentionally shot to look slightly gritty and more realistic in nature than your average 2000 era film. Nothing is glossy, nothing is pristine, but it is extremely natural looking and very filmic. Details and skin tones are extremely ruddy and pristine, with a great amount of fine detail available to the naked eye. Not to mention stunning black levels and a wonderful array of muted colors that shine on the native New Zealand landscape. The film isn’t meant to look like a documentary, but the muted style of filming is exquisitely done and lovingly rendered by an excellent encode by Shout Factory.

Shout Factory once again gives us a 5.1 DTS-HD MA original mix for the film, as well as a DTS-HD MA 2.0 downmix to enjoy as well. Naturally the 5.1 mix gets priority and it is well done for the genre. While the movie is entirely shot with Maori actors, the film is recorded in English with the occasional bought of Maori dialect with subs. Vocals are crisp and clear and the surrounding channels give a nice ambiance to the track. The whisper and bluster of the ocean plays easily on the ears, and the ambient background noises of the school come through just fine. LFE is punchy and well placed, and the the overall track is quite well done for a dramatic film.

I don’t honestly recommend Indie flicks wholeheartedly due to the fact that most of them are not easily accessible to the common viewer. However, Whale Rider is one of the very few that I can unabashedly recommend to most people without a second thought. It’s got a PG-13 rating, but is very family friendly (the PG-13 rating is really overkill in my opinion), and is a sustainably entertaining flick from beginning to end. The movie is LOOOOOOOONG overdue for a North American Blu-ray release and I’m extremely grateful that Shout Factory was able to get the rights in order to get this wonderful film out to fans. The Blu-ray looks and sounds great, and the special features are pretty solid, if I do say so myself. It’s a great release, and a disc that I’ve been waiting for for quite some time. HEARTILY recommend to check out to all interested.

Thanks for the review. I must have been asleep in 2002 when this came out since I never heard of it.. Will add it to my watch list.

lol. Unfortunately, I sleep a lot when these type of films appear in film festivals...

I remember this movie but never got around to seeing it. I can't believe its been 15 years already. I'll have to check it out now that you reviewed it. Thank you!

yeah, it's been a while since I remember it coming out. little tidbit of info. the main girl Pai (on the cover) is actually the same girl who played the Queen of Naboo after Padme in Revenge of the Sith
Last edited: Aug 23, 2017
You must log in or register to reply here.
Share:
Facebook Twitter Reddit Pinterest Tumblr WhatsApp Email Share Link