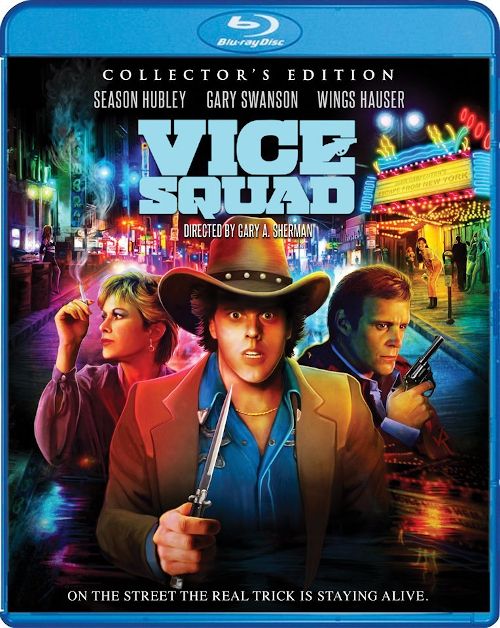 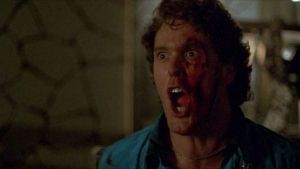 Movie
Never in a million years did I think Vice City would come out with a full on collector’s edition release from Scream Factory. I mean, it’s kind of right up there alley with the seedy, exploitative grindhouse nature of the film, but I had pretty much forgotten this movie existed until I saw the press release for it last month or so ago. This was the movie that I used to watch as a teenage on late night TV because my parents wouldn’t let me watch R-rated movies as a kid. Not to mention that it was advertised all over the place in the 80s as being a super serious, super realistic movie about the underbelly of big cities. Fast forward 30 something years and I have to give it a major chuckle, as the film’s grindhouse trappings mixed with the super serious intentions of the producers seems kind of cheesy in this day and age. It’s one of those movies where the intentions were to make something awesome, but they ended up making something that most people will just giggle at for a good time (kind of like watching a better version of Samurai Cop). Scream Factory goes back to the drawing board with a brand new 4K master, and TOOOONS of special features, of if you’re a fan of the movie itself, then the home video release won’t disappoint.

Los Angeles is a tough city to live in, and it’s even tougher for those who live on the streets. Princess (Season Hubley) is a single mother by day, and a streetwalker by night who is trying to make money to get her and her daughter out of town soon. When a vicious pimp by the name of Ramrod (Wings Hauser) murders one of Princess’s friends, a cop who’s seen too much decides to use her as bait. Vice Squad Officer Tom Walsh (Gary Swanson) decides to use Princess as bait to catch Ramrod, only for the bust to go sideways with Ramrod escaping and harboring a vendetta against the girl who set him up. Now he’s out for blood, and with no mercy in his mind, Ramrod is looking hunt Princess down until he finds and murders her crossing him. 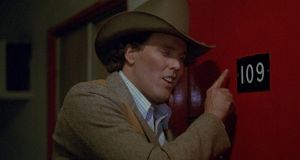 Officer Walsh is doing everything he can to keep her alive, but the streets are a tough place and Princess is still trying to make ends meets as a hooker. However, the tough cop is not going to give up until Ramrod is either behind bars, or underground.

Honestly, Vice Squad means well. It’s was created to bring to life the horrors of the after hours issues in a big city, but the low budget and bad acting really make this a cheese fest to sit through 37 years later (it was released 1 month before I was born). The acting is really schlocky and the dialog that was meant to be super duper touch and macho end up being hokey and laughable. The movie is fun in a cheesy sort of way, but only if you’re in the mood for some exploitation film making. Vice Squad was meant to also be super lurid and slimey but for some reason it was toned down very heavily in production, with no real nudity (a shocker for the 80s) and any sexual exploitation of the night walkers boiled down to innuendo and cheap 70s music. What was meant to be an eye opener of a film ended up being comically funny in an unintentional way. 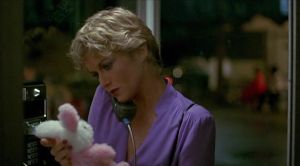 Vice Squad is advertised as coming with a new 4K scan from the negative, and it definitely doesn’t loo bad considering that it was always grungy and exploitative looking film. There’s a ton of natural film grain in the presentation, with night shots showing much more grain than daylight sequences. The movie itself was never shot to be “pretty”, but the new 4K master certainly breathes new life into the old film. Colors are a bit warm and on the orange/gold side of the equation, but details are more than impressive, and the clarity is spot on. The film will NEVER look like a million bucks, but I seriously doubt it can ever look much better than this simply due to the grungy style of cinematography that was used in it’s early 80s creation. 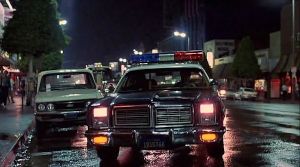 The 2.0 Mono track in DTS-HD MA lossless does the job quite well too. The scoring is a bit uneven throughout, with harsh and overly loud musical choices, and dialog that needs to be boosted a little bit to be perfectly intelligible. Voices come through cleanly and without any harsh overtones, and the effects of the car chases and gunshots come through with great precision. The gunshots at the end of the movie between the Vice Squad and Ramrod are actually pretty powerful for a mono track, and there’s no analog hiss or major distortions to mar the track’s clarity. Overall, rather impressive.

Vice Squad was one of those movies that was intended to be super serious, complete with the film makers trying to talk to actual police officers so they could replicate the griminess and sleaziness of the Hollywood strip correctly, only for the film to turn out to be a hammy, cheesy little laugh fest. I remember being really excited by the film 20 years ago when I was 19, but after seeing it again, I have to admit that it’s a grindhouse cheesfest that’s best taken for humor’s sake more than anything. That being said, fans of the movie will be excited by the new transfer and the LOADS of extras that Scream Factory was able to include on the disc (seriously, there’s like 6 hours of NEW special features and interviews on the disc plus the old legacy content as well). If you’re a fan of the movie, this is a no brainer collector’s edition, and if you’re into exploitative grind house flicks then it will be right up your alley, otherwise I might hesitate and rent the film first. Cheesy schlock

Thanks for the review. I will try and catch this on amazon prime/netflix on a lazy Sunday when available.

Thanks for the review. I too will catch it once available to stream. I don't remember if I've seen it or not but I did see parts of it in Terror in the Aisles.

Wow, Terror in the Aisles ... it brings back memories. I have to see if that is available anywhere.

tripplej said:
Wow, Terror in the Aisles ... it brings back memories. I have to see if that is available anywhere.
Click to expand...

It's selling on Ebay on dvd. I'm waiting for a blu-ray transfer

wow, Terror in the Aisle , that's a trip down memory lane