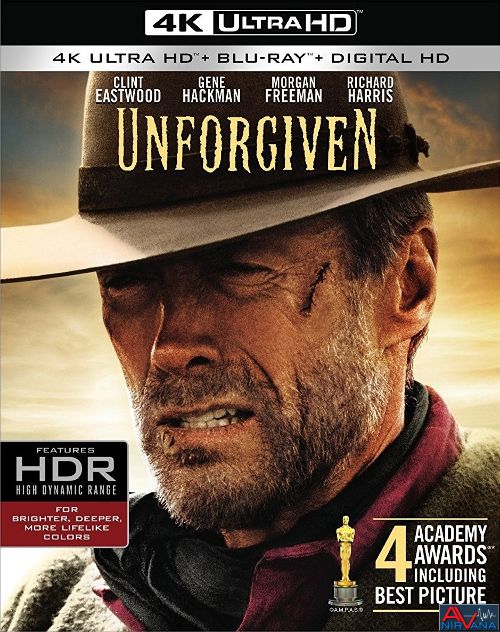 Movie
This has been LOOOOOOOOOOONG overdue for many reasons. Unforgiven has been one of the most seminal westerns of the last 30 years, and has gotten only ONE actual release (the other “re-releases” are just reprints of the same disc) after debuting as one of Warner’s FIRST HD-DVD and Blu-ray discs over a decade ago. I haven’t seen the movie in a few years, but I dusted it off to see what the print looked like and the Blu-ray was surprisingly decent for an early adopter disc. There’s some compression issues, and the lack of lossless audio was a curse that happened due to trying to make the same encode work on HD DVD’s smaller disc specs. HOWEVER, Warner Brothers has pulled out the stops as a full-fledged 4K master was struck for the 25th anniversary and a new DTS-HD MA lossless track was done for the first time ever!

I can’t actually believe in all my years of reviewing films that I have never once reviewed Unforgiven. It’s one of my absolute favorite western’s and easily the BEST western of the last 30 years or so. It came off the peak of Clint Eastwood’s high twilight years and was a MASSIVE sendoff from an era that was almost phased out (at this point in the 90s Westerns were more of a nostalgic thing rather than the massive blockbuster hits that they once were in decades’ past). Clint was starting to show his age and the western was thought of as a cliché. Something that Eastwood turned on its ear when he made Unforgiven. Instead of trying to cloyingly replicate the films of yesteryear he made a harsh commentary on the old west, and the dying era that was the old west back then. This was a last hurrah for an old gunfighter, and taking out a new breed of villain. One who wanted to control and manifest his power through gun control and sheer manipulation of will rather than a cigar smoking villain with 600 men to do his bidding.

Unforgiven is parallel to Clint Eastwood’s change in the film industry. It was a time when the old was being changed to something new. The old west was shifting from a time of gunfighters and outlaws, to the more modern world of technology and rules and order. The same can be said for Clint himself. Gone were the days of starring in film after film as an A-list actor, and in with the realization that supporting roles and directing was his future. Gone were the days of Rawhide and Sergio Leone spaghetti westerns, and in with the new. It’s a fantastic parallel, and one that I think Clint chose on purpose. Something that plays very heavily into the theme of Unforgiven during the opening scene as we watch that tree, that house, that grave that Eastwood is standing over. His time is not now, but even with the changing of the guards, those “old timers” still have one last ride in them.

William “Bill” Munny (Eastwood) is a man who has been beaten with time and civilization. Once an old outlaw and killer like the fables of old, he's now just…old. A poor hog farmer with 2 children and a dead wife, Munny has not much to live for except his prodigy. He’s not a very good hog farmer, and the money is about dried up. He’s slowing down and there’s not much hope until a young bounty hunter by the name of the Schofield Kid (Jaimz Woolvett) with an offer for money. A prostitute aways away was cut up, beaten and tortured for pleasure, and her fellow brothel members have rustled up a $1,000 reward for the person who can bring the man to justice. Munny tells the boy that he’s an old man, but the “Kid” is dead set on bringing the old timer along, as the legend of Bill Munny is still being told around camp fires.

Begrudgingly agreeing to the Kid’s request, Munny and his incompetent bounty hunter partner (who can’t hit the broad side of a barn door if he tried) head out to collect some money. The only problem is that not only does the aging outlaw (who can barely ride a horse) have to take down a man much younger than himself, but also deal with the town’s Sherriff (Gene Hackman). A cruel and remorseless man who rules his town with a smile on his lips, but ice water in his veins. Helping him along the way is old time partner Ned Logan (Morgan Freeman), and the trio of men reflect on life, whiskey, women, and the meaning of life in an era that is becoming so foreign to them. Unforgiven is less of an action western, as much as it is a somber reflection on life and the passing of the torch. Even Sheriff Bill Daggett is a relic of the past. A monster who is fading into oblivion like the men who are sent to take him down. It’s a fantastic film, and one that gets better and better as I personally age, and see the reflections in the mirror of my own life.

Rated R for language, and violence, and for a scene of sexuality

Warner has had some rocky mishaps with some of their remastered 4K UHD discs lately (Goodfellas being one of the most notable), but Clint Eastwood supposedly supervised and gave EXPLICIT instructions that this was not supposed to be a revisionist tweaking of the film. He wanted to keep the original feel and texture of Jack Green’s award winning cinematography and editing intact, and instead focus on just tweaking and adjusting it to look like the source and get rid of all the compression and encoding issues that the old Blu-ray/DVD was left with (the Blu-ray looked pretty good back in the day, but it was heavily compressed and there were multiple issues with softness, blocking and some haloing that went on). Instead of being outsourced and tweaked by someone else, Warner used there in house production company (MPI, which is responsible for some of the best remasters done by the company) and lorded over by several senior technicians who went through the film with a fine toothed comb and color corrected each and every scene for both HDR and SDR (for the Blu-ray and 4K version).

What I say next needs to be taken with context. The Blu-ray and the 4K for the new remaster both look LEAPS and BOUNDS better than the old 2007 Blu-ray, but there are some instances where there isn’t going to be a huge leap between 1080p and 2160p. These are usually because Eastwood bathed so much of the movie in complete darkness, and the filmography just doesn’t have a tone of detail for those scenes to really pop off the screen. However, the brighter lit sequences show MARKED improvement from one version to the other. The fine detailing in those shot look exquisite and the colors feel warm and earthy to the eyes. If you’re comparing against the old Blu-ray, there’s no contest, although I did notice that the film looks a little darker in 4K UHD than the Blu-ray counterpart, something I’ve noticed in several 4K discs that Warner has put out. From the amount of effort and the sheer amount of black sequences that Eastwood put in the movie I trust that it was done intentionally, but it is a little interesting to compare against the Blu-ray in this instance. As I said, this darkness is less noticeable in the spacious “wide open plains” shots, where grasses and blues skies dominate the picture. Skin tones and contrast levels look well balanced, and Eastwood’s aging face really is incredibly nuanced. There are some soft shots that are still maintained throughout the new master, but I’m suspicious that this is inherent to the photography more than anything.

Unforgiven was one of the early Blu-ray sacrifices that didn’t come with a lossless audio track and was only given a “mere” 640 kpbs Dolby Digital 5.1 track. Even with several re-releases and a giant 20 film Clint Eastwood Boxset, Warner never felt the need to re-encode the audio mix until now. With the 4K UHD and the remastered Blu-ray included in this set we get a full-fledged 5.1 DTS-HD MA audio mix to enjoy. I can’t tell whether it’s a remix, or just the benefits of a lossless experience, but the audio is distinctly fuller and more vibrant than the old 2007 Blu-ray was. Gunshots are powerful and explosive, LFE is deep and punchy, and the score has a more open and spacious feel to it than ever before. The gun battle out in the desert with the kid sounds exceptional, and the final faceoff between our two lead feels wider and deeper than I expected. Either way, this is definitely a much needed upgrade over the lossy Dolby Digital track that we’ve had to make do with the last decade.
.

​
Whether you want the 4K disc or not, this is a must buy set for a must buy movie, especially when you take into account the fact that this is the FIRST time that the accompanying Blu-ray is also remastered and upgraded along with the 4K UHD disc. Unforgiven is an incredible western and one of the last that Eastwood did before going into pretty much a modern era time period or directing only role for the aging film star. The movie has a LOT of depth to it, and takes a much darker approach to the classic western clichés than your average “hero shoot em up” out there, and takes a few viewings before completely appreciating the film. In fact, I widely consider it to be one of Eastwood’s BEST westerns ever created, and that says a LOT considering I own every movie the man has ever made. The 4K UHD audio and video (as well as the Blu-ray’s upgrades on those fronts) are a welcome addition to the fold and this is definitely a must buy package.

Hmmm... always been a big Clint Eastwood fan... sounds like this might be one worth considering. Excellent review!

Yes, as usual great review Mike. This really is a no brainer even if you're not into westerns. I'll be adding this to the collection.

Great review, Mike. I'm thinking this might be a worthy buy.

I'm not quite sure I like the idea of HDR being added to the mix... simply because it wasn't shot with HDR in mind. Kind of like colorizing a black and white film. But, I'm willing to give a spin.

I sure wish we could rent 4K discs out of redbox