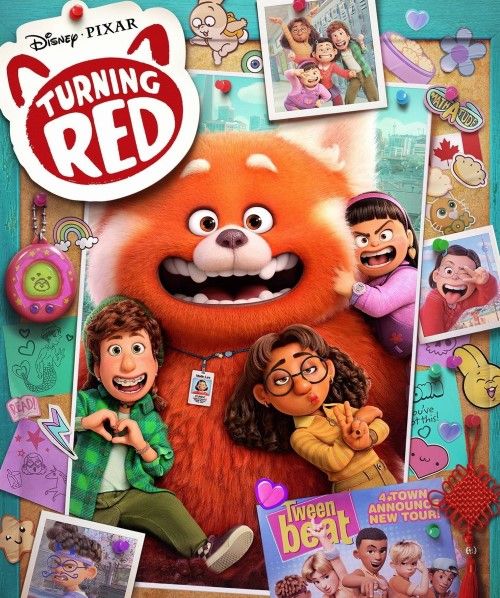 Movie
Growing up as a puberty ridden child is something few of us remember with perfect clarity. It’s a time of chaos, intense hormone and mood swings, us desperately trying to be cool and accepted, yet completely terrified out of our minds. It’s a time that most of us tend to forget as time goes on (to a certain extent, mostly by intent) and something that can be a literal nightmare for some people. Especially for poor young Meilin (Rosalie Chiang), a 13 year old who ends up changing a bit MORE than your average person during that time period.

Meilin is your average barely teen girl in Toronto. She and her friends Priya (Maitreyi Ramakrishnan), Abby (Hyein Park) and Miriam (Ava Morse) do what what normal teen girls do. They have fun at school, get into some mild trouble, and giggle over boys. However, Meilin’s life changes a bit MORE than just your average teenage hormone shift when in a sudden burst of emotion she shifts into the form of a red panda. Turns out, her family has a known “blessing/curse” bestowed upon them by the spirit of the Red Panda. Every woman her family has the ability to fuse with the Panda spirit and transform at will in order to protect their ancient village. However, in more modern times, it’s seen as more of a detriment than a blessing, so the family performs a ritual to lock the Panda away forever so that the female descendant can live a normal life.

Meilin kind of wants this to pass and get purged from her, but also sort of likes BEING the Panda. Being said Panda has afforded her friendship and personality changes that are appealing, but she doesn’t want to disappoint her ridiculously over protective mother Ming (Sandra Oh). And thus arrives the conflict in the story. The part where the 13 year year old feels that she is no longer a child, but still hasn’t figured out how to become an adult yet either (something we all fought through). Ming is insanely protective of her daughter, much to the detriment of their relationship at times, in hopes that she can spare Meilin the same suffering she went through with HER mother (played by long time actress Wai Ching Ho). With the whole crux of her situation hinging on a concert by her and her friend’s favorite boy band, Meilin sets out on a journey of self discovery to find out who she really is.

The story of Turning Red is not exactly new in theory. On the surface it’s your basic Disney adventure of a young person setting out on their own path to find their inner “self”. Films like Mulan made it popular years ago, but the SETTING for the movie really makes it unique. There’s multiple ways to interpret the Red Panda’s meaning in the film (and some overly hypberbilized by some), but it really boils down to allegorical story telling about the insanity of puberty. The right of passage that everyone goes through and just how INSANE it makes you at times. Those of us who grew up pre 2000 remember all of the craziness that we got into as teens and pre-teens. I still remember sneaking out of the house to see an R-rated Jet Li film when I was forbaden from doing so, or the confusion and sheer ADRENALINE that seemed to inexplicably fuel my flip flopping emotions. Turning Red weaves a fairly sweet tale of a girl coming to grips with that purgatory like state where you’re no longer a little child, but still not an adult either. That balance of how much should you stand up to a parent who can’t see you for who you are, and how much of you needs to respect their authority. It’s always a tightrope and one that can lead to incredible friction (as is shown here).

Now, this next paragraph is going to be my own personal thoughts and may not be simpactico with other adults out there. That is, the controversy about the film. Like many films these days one of the biggest things that the internet likes to do is create controversy about a new production. Sometimes it’s warranted, and other times I end up rolling my eyes and going “wait??? THIS is what you were all up in arms about?” while hitting my head against the wall. I heard everything from “Turning Red is sexualizing our children!!! just like Cuties!”, to “this isn’t a kid’s film, it teaches kids to be disobedient to their parents!”, and even “they’re sharing nudes!” (which is one of the more hilariously far fetched ones of the group). The reality is, just like most of the controversies in modern films, it’s overblown to a massive degree. No, no one is “sharing nudes” in school, and the concept is fairly ridiculous (it stemmed from the girls trying to raise money for tickets to the concerts by selling photos of Meilin in her Panda form. Instead of of accepting the whole fantasy aspect of the film, some people decided to blow it up into something it’s obviously not). The same can be said about the rest. Most of the controversies literally fizzle out the second you watch the film. HOWEVER, there is one criticism of the film that I feel does hold some water. That is the handling of Meiin and her mother Ming’s confrontation at the end of the film. It’s the one scene set where I can say “you know what, I can honestly see where people feel that it could be interpreted as glorifying rebellion”. Ming is portrayed as overbearing, over aggressive, and super protective of her daughter, but Meilin’s handling of it comes across at times as “I’m right, she’s wrong, and because I’m right I have the right to defy her”. So in that aspect, I felt the controversy hold a bit of weight. It’s a strange conundrum that seems to stem from modern societal issues, and a SUPER hot button at that. We have parents on one side of the aisle VERY intent on finding out what is being taught to their children in schools, and lobbying on a platform that the other side is trying to subvert their parenting authority. Again, something which DOES hold weight, as there is another facet of society (at least in PUBLIC society, most people in the U.S. are firmly in the middle and not extreme on either position) that has really been pushing for “your parents don’t need to dictate your life! Be who you are and do who you want and flip them the bird as you do so!” (hyperbolized a bit there), and some of that latter reasoning bleeds through into the film. Not enough that it’s a massive issue for me, but enough that I can see why some people who are more socially conservative minded might find it problematic, or at least worthy of discussion with their children before seeing. 95% of the film is simply a really clever take on self discovery and fantasy, but I will admit that there were a few viewpoints in the film that would have made me raise an eyebrow coming from the conservative family that I did. Again, this last paragraph was simply me chewing through what I feel was a mishandled theme that easily could have been handled a bit better and completely erased the controversy, despite really enjoying the rest of the movie. As such, my disclaimer is “parent as though seeist fit, but be warned in case that aspect of the movie is a sensitive spot for some”. Personally I found it not that big of a deal, just enough to where I said to myself "you know what, this aspect could have been handled JUST a little better".

Like usual, I tend to not give an official score for a streaming digital review simply due to the fact that internet bandwidth will be a deciding factor over artifacting, picture quality, as well as compression issues. BUUUUUUUUUUUUUUUT, despite that, this digital image is AMAZING. Definitely pure digital clarity from the tap with tons of bright colors (especially red, duh) and amazing detail levels. I noticed some banding in a few of the darker shots, but I’ve rarely seen a digital stream where banding WASN’T an issue, 4K or not. Great looking image, and should be just a taste of what the 4K UHD disc is capable of.

The Atmos track is also score less due to the video mentioned reasons, but the Dolby Atmos track found on the stream is quite the crowd pleaser. It’s constantly full of kinetic energy as Meilin shifts from human to Panda, and the thudding of her heavy paws adds some impressive low end. The rumbling battle between Ming and Mei is the highlight of the movie, with amazing surround usage and some really nice bass mixed in. Vocals are clean and clear as expected, and while not perfect (some of the time I felt like dynamics could be slightly squashed), this is a great sounding Atmos track 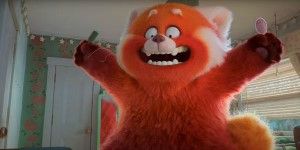 Turning Red is a fun little romp, but one that is plagued by a few wonky story devices, some issues with teen rebellion, but a fun and culturally rich adventure as well. The stream that I was privy to watching was AMAZING in terms of video and audio quality, and while the Atmos track on the stream is going to be more compressed than the disc’s Atmos stream, was surprised at how robust it was for being a Disney controlled mix (it wasn’t their typical “Atmouse” track). Cute story, definitely one aimed for teens or pre-teens rather than little kids, but still more than an enjoyable romp.