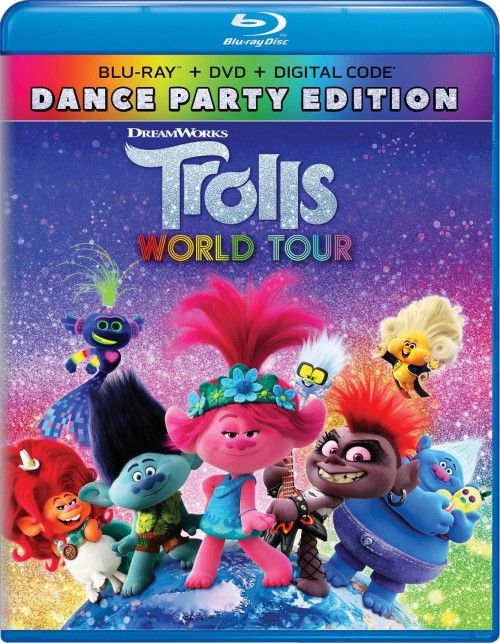 Movie
Trolls World Tour was yet another victim of the giant squashing hammer that was the Covid-19 pandemic. Originally slated for an April 10th release date, Universal/Dreamworks watched as theaters were shutting their doors and closing down due to the desire to social distance. Instead of actually just shuttering the idea completely (this was supposed to be a major money maker), Universal instead decided to release it via VOD for home release, where it actually made a sizable chunk of change, before they announced a home video release date. This alone seemed like a huge win for the studio, but it may show the changing face of consuming media, as the theaters were ROYALLY ticked off, with AMC going so far as to say they wouldn’t show a Universal title if it was being streamed via VOD at the same time (theatrical exclusivity rights is a HUGE thing for theaters) and kind of put them on edge with the major studios. That being said, I’m not a wild person when it comes to what method you view your media (as long as physical media survives!) and just want to have a bit of fun.

Ultimately, the story BEHIND Trolls World Tour is a bit more interesting than the actual plot of the movie. 2017’s Trolls was another attempt to popularize old 80s and 90s culture and bring it into a lucrative, flashy bit of pop culture for the kids. It wasn’t special, but it was reasonably fun. The same thing goes for the sequel, as Dreamworks and Universal craft a film that’s basically a giant sugar coated gumdrop of pop music (even the hard rock and country is all popified) to just tap your toe along with and have a little bit of fun with.

Pop Queen Poppy and her group of trolls are all happy and having fun in their home village when Poppy (Anna Kendrick) gets an invite by a mysterious Queen Barb (Rachel Bloom) for her hard rock world tour. It seems innocent enough, but Barb has a bit of an ulterior motive. You see, there are 6 different troll clans out there (unbeknownst to Poppy), each with their own type of music. Generations ago the 6 troll clans separated due to their musical differences and took with them a musical “string” which housed their particular style of music. Now Barb is back and she wants the strings together so that she can play the ultimate power chord and unite all 6 tribes under the banner of hard rock. The thing is, the only way Barb can think to unite the clans is by destroying the other 5 types of music and leaving only hard rock as the troll music. Now it’s up to Poppy, Branch (Justin Timberlake)

To borrow a few musical terms, Trolls World Tour is about getting the band back together and united again. However, WHY it’s getting back together and how it’s done is the real dilemma of the film. Barb wants to unite the trolls under one banner, and that banner is of course hard rock. It’s a sort of totalitarian method that usually is seen in founding members of bands, and it’s easy enough to paint her as the villain throughout. The rest want to see their music survive, but they’re more than willing to follow the flow and work WITH Barb, even though some of them aren’t even assured that their music will survive.

The plot is simple, silly, and pure cotton candy fluff, but the real draw of the movie is that it’s basically a musical smorgasbord combined with pretty colors. It’s cute, fun, and definitely toe tapping with the highly autotuned musical numbers. They do a good enough job at portraying the different musical styles, but in reality they’re hollow shells if you’re a bit music aficionado. Everything is basically popified (even the hard rock is very soft and the chords are softened to be more palatable to general audiences). Amusingly enough, I was kind of rooting for Queen Barb as I grew up with 80s and early 90s hard rock and metal as my musical “base” so to speak (meaning I kind of cheered for a hard rock comeback), but in reality, this is all about showing kids that music exists in all shapes and forms, and with an underlying message of inclusiveness through our differences (something which has been sorely lacking in our culture today, ranging from musical tastes all the way up to our politics) in a sugar coated color bomb.

Yeah, no surprise here, Trolls World Tour is a tour de force of bright, shiny colors that really shines on Blu-ray. The whole film is just over saturated with 10 million color schemes, and nearly blinds the eyes from the sheer overwhelming amount of brightly saturated shades. Fine detail is excellent as well, with great little nuances on the water as well as the fibers on the troll’s bodies. There’s a feeling that it’s not AS sharp as some of the 5/5 rated films, but the details are excellent, shading and coloring are spot on perfect, and there are no cracks in the digital creation. It’s near perfection and pure eye candy to look at. 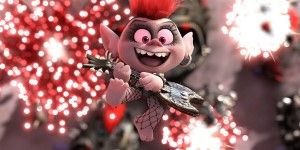 Universal’s Dolby Atmos track is good, but sadly it’s not GREAT, which is actually a bit surprising considering that this is one non stock pop/rock musical. The vocals are crisp and clean, and the front sound stage is impeccable. I didn’t hear a single dropped line of dialog and the singing is perfectly balanced with the dialog. My only complaints was that as an Atmos track it wasn’t overly robust in the overheads OR the directional shifts. The music has good bass, but it doesn’t really pound and pulsate as some of the song’s so desperately beg for. It just feels a bit muted in it’s dynamics even though it’s still quite good. I was impressed with the surrounds and even balance to the whole thing, but those gigantic swelling rock moments never came, and the bass just didn’t slam me back. All in all, this is a very good track, but falls just short of excellence.

• FEATURE COMMENTARY WITH DIRECTOR WALT DOHRN, PRODUCER GINA SHAY AND CO-DIRECTOR DAVID P. SMITH
• DANCE PARTY MODE – As Queen Poppy makes her way across the lands, this on-screen experience encourages the viewer to sing and dance along as they customize their own musical journey. With sing-along and dance elements, interactive pop ups and more, it's sure to be a world of fun!
• TINY DIAMOND GOES BACK TO SCHOOL – In this exclusive original short film, journey back to school with Tiny Diamond as he tries to figure out how to be the cool kid and 'fit in'.
• TROLLS DANCE ACADEMY – Compilation of How-To-Dance pieces from Dance Party Mode
-- Pop
-- Waltz
-- Country
-- Funk
-- KPop
-- Reggaeton
• TROLLS WORLD TOURIST MAP – Cloud Guy provides a quick "tourist guide's" view of the six realms that make up Trolls Kingdom.
-- Trolls Village
-- Symphonyville
-- Lonesome Flats
-- Vibe City
-- Volcano Rock City
-- Techno Reef
• DELETED SCENES WITH INTROS BY DIRECTOR WALT DOHRN, PRODUCER GINA SHAY AND CO-DIRECTOR DAVID P. SMITH
-- Cooper's Destiny
-- Let's Go Save the World
-- Bicycle Built for Two
-- Breaktime
-- Meet the Bounty Hunters
-- Making New Friends
-- Cloud 9
• TROLLS PERFECT HARMONY – Hear from the star-studded cast of Anna Kendrick, Justin Timberlake, Anderson .Paak, George Clinton, Kunal Nayyar, James Corden and the filmmakers about the history of music featured in the film. From classical to country to rock, pop and techno, the cast and filmmakers reveal their favorite types of music.
• TROLLS WORLD TOUR BACKSTAGE – A behind-the-scenes making of featurette showcases Anna Kendrick, Justin Timberlake, Rachel Bloom, Ron Funches, George Clinton, Mary J. Blige, Sam Rockwell and Kenan Thompson as some of the talent behind the Trolls and the process of bringing the them to life.
-- Opening Act
-- Headliners
-- Encore!

Is Trolls World Tour a big smash hit that is likely to rival How to Train Your Dragon? Of course not. If you watched 2017’s Trolls you know that it’s pure bubblegum pop fun and nothing more. It’s vapid, silly, but generally amusing and pretty to look at. I actually hate to say this, but I enjoyed myself, and I wasn’t even watching this with my nieces and nephew either! Simply put, this is pure sugar coated fun for the kids that is palatable for adults and not going to make you want to rip your skin off from the agony of watching. Universal’s Blu-ray looks AMAZING, sounds good, and even has a moderately solid array of extras to boot. Solid enough watch, in my opinion.

The Digital Entertainment Group says this now occupies the "most watched at home" spot on their chart for the week of July 4 (and that's with an official physical disc release date of July 7). I'd assume most members look at Trolls and say "hard pass," but this release is going to make Universal some coin!

it was probably the biggest "theater to VOD" film of the Covid-19 lockdown. Universal made BANK. Which is why AMC announced that if Universal tried this again they wouldn't show their films in theaters..
You must log in or register to reply here.
Share:
Facebook Twitter Reddit Pinterest Tumblr WhatsApp Email Link