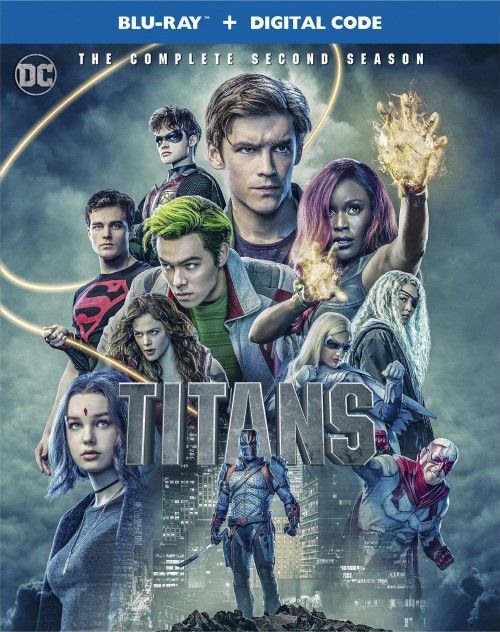 Movie
I’ve been rather impressed with the DC streaming line up so far. While I still think the peak of the services shows comes in the form of Doom Patrol and Swamp Thing (I still am depressed that we only get one season of that series), we can’t ignore the flagship show that DC put front and center to advertise its new venture. It’s not hard to see why they chose Titans as the front runner. It has been made into countless comics over the years, been given multiple animated incarnations (sometimes simultaneously with Teen Titans) and is WILDLY popular from an animated standpoint. The decision to make it all dark and slightly angsty really had me worried though, especially after the abysmal first season trailer that had people laughing around the world last year (that “bleep Batman” line was delivered so badly that it became an online joke), but I was summarily impressed with the first season of Titans. It was a bit angsty, but the darkness of the show actually worked in it’s favor, instead of embracing the humor and light heartedness of the animated show. The comics were always a bit moody and grim, with the characters having to fight their own inner demons as well as villains on screen, so I can understand why they went that route.

Season one ended with a big cliffhager. We had just seen the Titans come together as a TRUE fighting force, and now Rachel’s/Raven’s demonic father Trigon come to earth and start sowing his seeds of destruction. The first being his overtaking of Dick Grayson’s (Brenton Thwaites) mind. Season two picks up right where that ends, with the rest of the Titans coming to Dick’s rescue. Luckily the show also fixes one of my major problems with season one. That being that Rachel was never really “Raven” from the comics, but a whiny scared little girl. This conflict with her father is just the push she needs to unleash her full power and become the dark, brooding, confident, and slightly odd super powered hero we all know and love.

However, there are more villains and heroes out there, and the Titans are in for the fight of their lives this season. Not only do they have to battle their own inner problems and the problems of coming together as a team (Dick still struggles with being a loner like he was taught by Bruce Wayne), but they have one of the scariest and most dangerous villains that even Batman has ever fought. A single minded assassin who is back for revenge. An assassin with a mask and the skills to make the entire Titans VERY afraid. That is none other than Slade Wilson…..Deathstroke himself (Esai Morales). 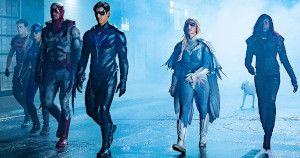 But while Slade is very much the most physical villain, there is also someone more sinister and insidious behind the scenes. Cadmus (yes, THAT Cadmus) has been busy with genetic manipulation and has created a genetic hybrid of Lex Luthor and Superman’s DNA in an effort to create a brilliant, but powerful, super being that THEY can control name Conner (Joshua Orpin). Conner escapes the lab with the help of Dr. Even Watson (Genevieve Angelson) and comes into contact with the Titans, not knowing his true purpose and the purpose that Cadmus has for him. A purpose that will not only rip the Titans apart, but upset the balance of power in the world as well.

Season Two of Titans was what I hoped Season One would have been. I understand that the first season is plagued with trying to set backstory, character beginnings, and show the evolution of where they came from in a super hero universe, but it had some flaws. Fans were incredibly excited to see some of their heroes, but disappointed with how some of them were handles, especially Raven and Starfire. Raven is HUGELY improved this go around, though, and fans should be very excited with how she’s matured. At this point she’s pretty much the Raven we all expected and wanted (well, except for her infamous “Azerath Metreon Zinthos” spell chant). Starfire….well, She’s definitely improved. They toned down the ridiculous hair from the first season, but the actress really doesn’t bring across the empathy, out of world oddity, and general emotional resonance with the character. She was always the weakest spot in the first season, but at least she’s more palatable this go around.

What makes Titans really fun is how fluid it is with super heroes coming in and out. Instead of just adding 1-3 superheroes and making them into a huge arc, they allow famous Titans heroes to come and go so organically that it doesn’t feel like a “super hero of the week” show. We get Dove, Hawk, Jason Todd, Aqualad, Krypto the super dog, Conner (Superboy), Rose, and many more. The show still has some angst to it, but that’s kind of par for the course with the series. The main show runners, even in the comics, have always had to deal with battling their own personal demons, and Dick Grayson was always a slightly angsty character. It’s luckily a bit less this season and Dick finally is maturing to the stalwart leader of the group by the end (yes, we actually get to see him as Nightwing by the end), and his interactions with the rather unhinged successor, Jason Todd, is handled excellently. There’s still some super hero cheesiness, but this season is a huge improvement over the already enjoyable Season one. The last thing I will say, is that while Slade/Deathstroke is an awesome villain and done excellently, it just can’t reach the epic heights that Manu Bennett pulled off in the second season of Arrow. Heights that most DC superhero shows have never been able to replicate (it was the peak of the Arroverse by a very large margin in my opinion). 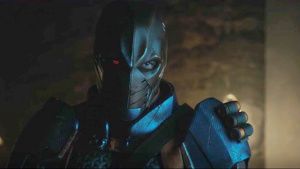 Upped from 11 episodes to 13, Titans: The Complete Second Season actually looks a teensy bit better on Blu-ray than it did for the first season. The two BD-50s give ample bitrate for the encodes, and the grim and blue tinged hero show shows magnificent detailing most of the time. The show is bathed in darkness and a deep blue haze, but there are sharper and brighter moments, such as the Cadmus “commercial” at the beginning of the Conner episode, or the end where we get to see the open world for once. Still, colors are deep and rich, with heavy maroons, dark blues, and rich blacks to fill it out. Blacks are generally good, but do show some low light banding every once in a while, as well as hints of noise in some of the really dark scenes. 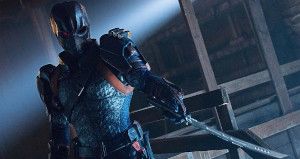 The 5.1 DTS-HD MA track is a near identical clone of the first season. That means it’s nearly as good as most of them, but slightly subdued. The lower budget of the streaming show shows in the sound design, as it’s not nearly as bassy or dynamic as it’s brethren at times. Still, it shows off quite a bit in the fights with Slade Wilson and the various super powered beings they face. Gunshots ring out with authority, the score is filled with slow mo bass moments, and the surrounds are lit up with said score as well as a bevy of fighting sounds. Simply put, it’s a good mix that does well on all fronts, and it’s only weakness is that some of the CW shows have really set the bar for audio mixes. Good one all around. 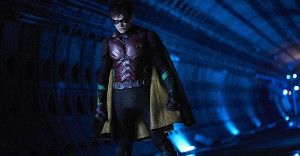 I really liked this second season for Titans. Like the first season, it bypasses a lot of the teeny bopper tropes that plague the Arroverse, but it also introduces a few cliches of it’s own. Mostly that it tries to be “mature” by adding in R-rated language and some violence, relying on that to be “cool” sometimes. However, those flaws are not detrimental, as the season really came into it’s own hit the “groove” of the Titans core narrative. The characters are finally meshing and coming into their powers, and it looks like the DC streaming service is setting it up for a THIRD season, thank goodness. The Blu-ray from Warner Brothers is generally excellent, with great video, good audio, but they really tanked the extras this season. I noticed the same thing with The Swamp Thing. The first season of Titans came pretty decently packaged (for a super hero show), but this year we have one 11 minute featurette about Jason Todd, that’s it. Aw well, I can’t complain too much as the show really is fun and the tech specs nice. Definitely recommended now as the series has caught its groove.