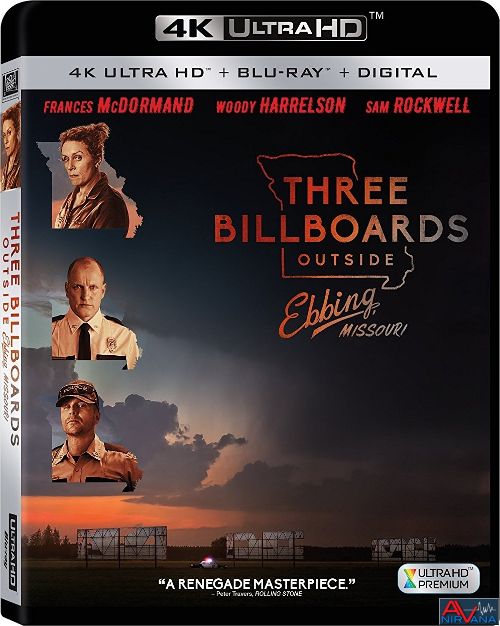 Movie
I have to admit than when I first heard of Three Billboards Outside Ebbing, Missouri, I immediately thought this was going to be another Coen Brothers film. The trailer reeks of that sort of “off base” quirkiness that they are known for, combined with the fact that it was starring Francis Mcdormand herself. Otherwise known as the queen of Coens quirk, as she has starred in a good handful of their movies (probably owing the most fame as the “dontcha know” spouting cop in Fargo). Low and behold, Three Billboards had nothing to do with the Coen Brothers, but was the brain child one of Martin McDonagh, who’s claim to fame stems from two quirky little indie comedy/drama/action/crime thrillers (In Bruges and Seven Psychopaths). This made me doubly intrigued, considering how much I loved the look of the trailer, and how much McDonagh impressed me with In Bruges (Seven Psychopaths was good, but not nearly as good as his directorial debut) and while I can’t say whether it will garner the academy awards its been nominated for, Three Billboards is one of the most darkly entertaining films of 2017.

Mildred Hayes (Francis McDormand) is out for blood. She walks right into the Ebbing, Missouri advertisement agency and loudly demands to rent out three billboards on the side of a long forgotten dirt road. It doesn’t take long for us to figure out why, as the billboards spell it out for us in pretty big letters. Mildred is the grieving mother of a daughter who was assaulted and murdered near those signs almost 10 months ago, and the Ebbing police department seem to be doing very little about it. Calling out Police Chief Willoughby (Woody Harrelson), Mildred is looking for one thing. To light a fire under their rear ends and force them to go out and do their job and find her daughter’s murderer.

I would be lying to you if I said that this is really the plot of the movie. While the murder and Mildred’s obsession with finding her daughter’s murderer build the framework for the tales, McDonagh takes a cue from the Coen Brother’s big book of characterization and makes this about the people themselves. Rounding out the cast are at least a dozen big name stars who dot the film with outlandish and quirky characters that just don’t seem forced, or fake, in the slightest. This is a story that highlights the different facets of the people involved in the murder, rather than about catching the killer itself. Mildred seems like the epitome of a sympathetic character at first. She’s been wronged by the police department, and all she wants is closure for the pain she’s feeling. Chief Willoughby is the jackass cop who has to keep an eye out for his racist deputy Dixon (Sam Rockwell, in an absolutely amazing performance), but things are never as they seem. Three Billboards begins to peel back the onion layers and dig deep into the hearts of these people, unearthing what truly makes them tick.

Donagh masterfully juggles the characters about, showing us the darker sides of the main characters, while also giving us just enough information to keep us intrigued with the actual murder. Willoughby is not really the ineffective cop trying to keep Mildred at bay, but rather a trained professional who understands that murders aren’t solved over night, and some take years to wrap up. Mildred is originally the sympathetic victim, but her obsession with the crime on her daughter has taken her down a dark road. One that creates an animosity where there really should be none. Dixon is the fawning, moronic, follower of Willoughby, and sees like the most unredeemable of the group. But it’s really his acts of maturity throughout the insanity of the film that brings everything together. And this is just the first three characters! The film shifts around from person to person, giving us little peeks into their lives, and adding depth and complexity to every second of the story.

Three Billboards has a few flaws, but none of them are detrimental. Probably the biggest one would be some of the Coen Brothers levels of absurdity. Usually the Coen’s can back it up with some incredible dialog, but McDonagh isn’t as sharp with his writing skills as the famous brothers. Some of the darkly comedic moments don’t register as readily to most people, and could almost be seen as straight on somberness if it weren’t for the lunacy that surrounds the situation. Mcdormand is incredible as always, but Sam Rockwell and Woody Harrelson don’t give the veteran actress much room to hog the stage, as they both turn in performances that should have netted them Best Supporting Actor nominations. The film is sharp as a tack, and deeply disturbing, but it is a poignant film that is more multi layered than most films I have seen in the last 5 or 6 years of reviewing.

Rated R for violence, language throughout, and some sexual references

Shot using Arri Alexa cameras (sourced at 2.8k) and finished with a 2K digital intermediate, Three Billboards looks stunning on 4K UHD. The film really plays well with the bright southern greens and vibrant shades of blues and reds with the use of HDR. The fine details is more noticeable in backdrops, and the up close facials show off little pores that just weren’t available in the Blu-ray. Blacks are deep and inky, but I did notice some mild mosquito noise inside Dixon’s scummy looking house that he shares with his mom, and the black crush that comes and goes is still a bit annoying. The HDR actually gives the film a slightly different look. Infusing a yellowish tone to the outdoor shots, and making some of the browns look a bit more sallow. It’s a good looking UHD film, and shows that even 2K masters can make for some good looking imagery if done right.

The 5.1 DTS-HD MA track found on both the Blu-ray and this 4K UHD disc is finely nuanced, with a very laid back approach to it. There’s not a whole lot of action going on to get wild and woolly over, but it’s all about the subtle little cues found throughout the sound stage. Dialog is crisp and clean, while the little chirps and whirring sounds of the Missouri bug life hums lightly in the back of the room. LFE is tight and clean, adding some weight to the twangy southern score, as well as a few louder and more explosive moments (such as the bar fight, or the crash of a Molotov cocktail into the police station window).

Three Billboards may not win all of the Oscar nominations that it has going for it (I didn’t get to watch them this evening), but it is one of the most unique and powerfully attractive films of 2017. It felt like the good old days of Coen dominance, and Franicis McDormand gives one of the best performances of her lifetime. The 4K UHD disc is near impeccable, with great video and the same wonderful audio as the Blu-ray. Extras solid, but nothing wild (the Six Shooter short film is a fantastic addition, as it was the start of McDonagh’s career) and I HIGHLY recommend the film if you’re a fan of darkly quirky films, ala the Coen Brothers. Highly recommended.

Thanks for the review. I was interested in seeing this once it was nominated for Oscar. Will check it out.

Good review. I hadn't really paid much attention to this when released, but now that McDormand won an Oscar for the film it brings it back to mind. I really need to get out more. Looking forward to finally watching this soon.

Watched this today. Really enjoyed it, well written script. Drama, with some action.

I have it and it's burning a hole in my pocket... hopefully will give it a spin this weekend!

Bought and on the way. I really need to find more time to watch movies!

I think I will catch this one soon. Thanks for the review!

Great review for what I felt was one of the better movies I’ve seen in awhile. Like you it reminded me of a Coen film. I don’t know why but No Country for Old Men kept coming to mind.

JBrax said:
Great review for what I felt was one of the better movies I’ve seen in awhile. Like you it reminded me of a Coen film. I don’t know why but No Country for Old Men kept coming to mind.
Click to expand...

No Country is such a sweeeeet film.

No Country was an excellent flick! Got my Three Billboards today. Planning on watching it tomorrow evening.

Yes it was. 3 Billboards is up there as well.

Watched the movie this weekend. I really enjoyed it except I was expecting more from the ending.

Sittin' on the kitchen table. Maybe watch it some time in the next couple of days.

Is it just me or does Sam Rockwell shine in every film he is in? How is it that this guy doesn't have multiple Oscars?

It's not just you. He was always a good actor, but he has gotten REALLY good as he has aged (IMO)

Mark C Flick said:
Sittin' on the kitchen table. Maybe watch it some time in the next couple of days.
Click to expand...