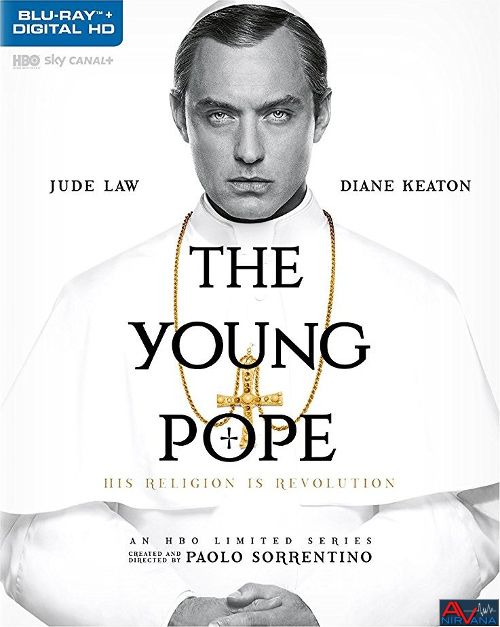 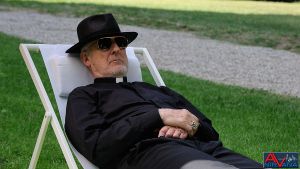 Movie
HBO was basically the inventor of the adult cable television phenomenon that we have today. True Blood, Game of Thrones and several others have paved the way for the absolute glut of “mature” shows that seem to have become the norm today. As a result, it’s harder and harder to find something unique and new amongst the constant deluge of shows that seem more similar than different nowadays. We’ve had political intrigue, debauchery, swords and sorcery, guns and backstabbing, blackmail and sex. You name it, but we’ve never had those shows revolve around something like organized religion until now. Or more accurately, around the Catholic church and the papacy. Almost a strange hybrid of House of Cards meets Dan Brown, The Young Pope takes on a fictionalized American pope taking power and a political thunderstorm of backlash that comes from a highly structuralized religo/political social structure coming to a vicious head.

It’s modern times, and a new Pope has been elected by the Cardinals. Pope Lenny Berlardo (Jude Law) has taken power by a scheming group of cardinals who feel that the young man will be easily malleable in their hands and create puppet “king” who will bend to their will, allowing for a rule from behind the curtain. However, Pope Berlardo is not exactly the pushover that the powers that be thought he would be. Instead he is a hard lining Pope that has a scheming mind of his own that allows for a battle of wills that was unprecedented before this time. Lenny is not your average old man who has risen up through the ranks over years of service. He is comparatively young, and was an orphaned boy who was raised by Sister Mary (Diane Keaton) and has a whole host of demons that he is struggling with. Demons and a past that makes his ascension all the more crucial in dealing with the backstabbing and duplicitous college or cardinals who are upset that their power play is being interrupted.

The show is never light hearted and takes itself WAY too seriously for its own good. The conspiracies and backstabbing’s are taken to an entirely different plane with overly ridiculous villains who twirl their mustaches the entire time while laughing into the camera. It feels very much like what happens when you have Dan Brown try to write an episode of House of Cards, with a pope who is pretty much teetering on the edge of religious fervor and outright agnosticism, and a political power structure that rivals even the most Machiavellian political structures. There’s a strange sense of disparity between Lenny and the real world Pope of today. Lenny is actually quite conservative in some aspects, and is WILDLY different than the liberal social justice infused Pope that we are familiar with this decade. As such it’s interesting to note that Lenny is also much harsher and less willing to bend to his political and religious colleagues then we might be used to. 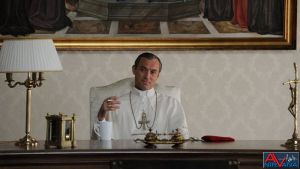 The opening shots of the series are surreally bizarre, almost to the point where I was wondering if we were watching a show directed by David Lynch, as I had flashbacks to Twin Peaks. There’s a crazy dream sequence where the Pope is going off on the carnal pleasures of the world, and then we’re snapped back to reality, only to realize that reality is almost as surreal and dreamlike as the ACTUAL dream. In fact, there are many moments throughout the show where you wonder if the Pope is actually lucid dreaming rather than dealing with the real world. Especially when he is alone with another person and having some strange heart to heart talk that just starts feeling creepy and odd, only to snap back to a more serious and realistic conversation in a heartbeat.

I had to give a chuckle more times than not, as the melodrama and over the top “dun dun dun!!!!!” musical numbers gave The Young Pope elements of a soap opera rather than a serious drama. Despite the fact the show has next to NO levity, and takes itself ridiculously serious. Almost to the point of humor in and of itself. Jude Law is great as Lenny, hamming it up to the nth degree, and the supporting cast do an amazing job. Diane Keaton is great as the hard as nails Sister Mary, but once again, she feels la bit miscast in the role of a nun. I don’t know why, and I can’t place my finger on it, but she stood out like a sore thumb amidst all of the other Italian based Catholic based clergy. 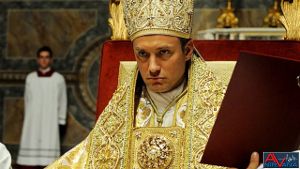 Shot on Red Epic digital cameras, The Young Pope comes to Blu-ray with a great looking 1.78:1 AVC encoded image. The three disc set is given only three (to four) episodes a disc and looks really great in 1080p. The show has been stylistically graded to give the image a slightly warm look with boosted brights and a lightly soft look to it. Everything is crystal clear and full of great detail for the most part, but when you get out into the sunlight you can see the white boost the most and that sort of surrealistic “haze” that once again reminds me of a dreamlike state. The black levels are healthy dark and deep enough without giving up too much shadow detail and the overall clarity of the disc is quite nice for a modern HBO shotw. 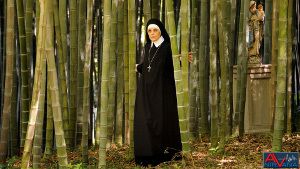 The 5.1 DTS-HD MA track is nothing short of exceptional, and even though this is a dramatic show, there is a lot of expansiveness and spaciousness to the track. Dialog is clean and clear of any distortions, and the surrounds are constantly active with the little nuances of the Vatican hall. Echoing of footsteps on stone floors, the rush and roar of a helicopter coming in from above, and a myriad of other little sounds that bounce around the soundstage. Listen to the voices in the underground catacomb area. You can hear the voices echoing and bouncing off of walls without a single distortion. While the lfe is solid and impressive, it still IS a dramatic show and that does limit some of the low end output.
. 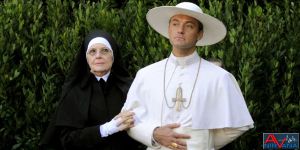 The Young Pope is a strange and bizarrely “Lynchian” show that doesn’t really catch enough steam to be believable. the political machinations are straight out of House of Cards and the conspiracy theories can almost feel comical at times. You can tell that Paulo Sorrentini was trying to make a commentary on, and do a slice and dice job on some of the religious sensibilities that is prevalent in the modern political structure of the catholic church, but the constant lack of even the mildest of droll humor left the series overly serious and weighted down with too much melodrama (not to mention some hilariously over the top smarmy and sleazy interludes that are used to try and blackmail the Pope). The audio is FANTASTIC and the video is great, and I was actually impressed with the amount extras HBO put on the disc. Still, it’s not going to be one of the higher rated HBO shows for a reason, and at this time I can only recommend checking it out as a rental.

I really wanted to like this one but for me, meh. Perhaps I need to give it a chance and get past the first three.