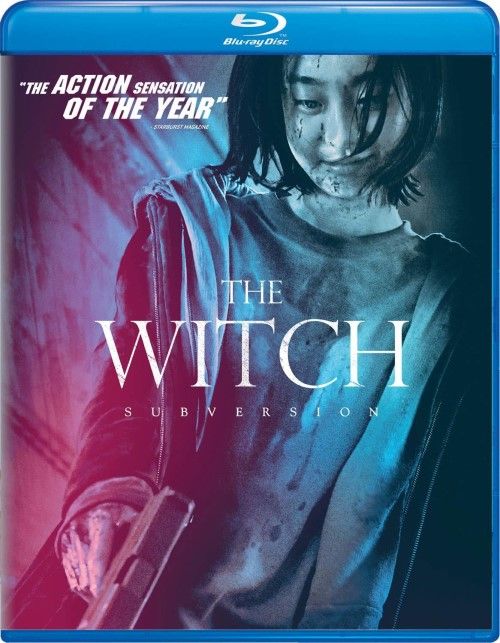 Movie
I’ve been waiting for The Witch: Subversion (Manyeo in overseas markets) for quite some time as I’ve heard nothing but good reports on it from trusted friends and fellow sources of Asian cinema. The film was finished back in 2017 and shown early 2018 in South Korea, but it has languished for 2 years before finally coming to U.S. shores, mostly due to (from what I’ve HEARD on the grapevine) to rights issues with Warner Brothers. Luckily Well Go USA (my favorite source of Asian cinema) was able to get rights the film finally and release it for us domestically. The movie is a total blast and just about everything I could have hoped fore. The only major negative that I can think of is the fact that the story is a bit overstuffed. At 2 hours and 6 minutes long it feels like it needs another 30 minutes to flesh some points out. There’s just too much story and not enough time. Luckily the film was conceived as a two parter, with the original title being The Witch Part 1: Subversion, and due to the financial success of the first film, the sequel is planned to start production later this year (lets just hope that it doesn’t take the same amount of time between release date overseas and domestic release for the sequel as it did for this one), so fans will luckily be able to take part of the obvious “two parter” nature of The Witch: Subversion.

The film opens up with a viciously brutal scene with a mysterious group of people absolutely murdering an unknown set of victims. The only problem is, one of them escaped into the wild, and the mysterious organization seems intent on finding her. Flash forward a decade, we see what happened to said escapee. She was found in a field by a farmer and his wife, and raised as their daughter, Ja-yoon (Da-mi Kim). A sweet girl, she is burdened by the fact that her adopted mother is suffering from Alzheimer, and having to deal with the fact that her father is not able to keep up with the farm’s bills as a result. On a dare from her best friend, Ja-yoon tries out for a nationwide talent contest, revealing to the world that she has a certain “gift”. A gift that is instantly recognizable to the secret organization that lost her 10 years ago. An organization who will stop at nothing to get her back.

The Witch: Subversion is a blast of a movie, in my opinion. The first opening scene sets us up for all that is to come, with hints of genetic super soldiers, brutal tendencies towards violence, and a tease of the action that will be next. However, the first two acts of the film (past that opening scenes) play out much calmer, and as a mystery. While Ja-yoon is soon targeted by the mysterious government agency (pretty obvious from the get go, but it is soon confirmed in the film of what they are), she’s not aware that she lost most of her memories when she escaped from them the first time. As they manipulate her and push her towards the goal of unleashing these memories Ja-soon begins to exhibit some incredible powers. Powers that only manifest in the second act of the movie, leaving you grinning from ear to ear. My only problem with the 1st and 2nd act stem from the fact that there is a LOT of backstory and a lot of questions asked and hinted at, but not enough answers to them come in the final act. My suspicion is that Hoon-jung Park gave the audience just enough information to keep us satiated, but not enough to make it where you felt like a second movie wasn’t needed. Obviously this was meant as a duo from the start.

The third act is nothing short of a bloody (literally) masterpiece. With the mask off of who she is, it turns into a gruesome and gory revenge tale (with a super powered twist of course) as Ja-yoon wreaks bloody vengeance on those who have been hunting her. The choreography and CGI is actually really good for a South Korean film. They have been upping their visual effects game in the last decade and it really shows here. Except the scene where Ja-yoon’s male counterpart (played by Wook-sik Choi) does the whole “bullet time on the wall” thing, the CGI is near seamless. 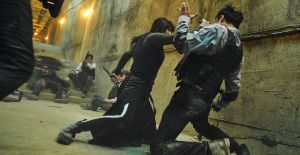 I could find literally ZERO information on the filming techniques uses, or the cameras and resolution, but I would bet my life on the fact that this is very obviously a digital shoot. The 2.39:1 framed image is super glossy in daylight shots, showing all the earmarks of a digital production. The image has a light blue-gray tone to the colors, sometimes muting them to darker shades (such as deep maroon reds, dark dark blues etc). Other times the colors shine through with intensity, such as the red flowers when Ja-yoon is out coming home. Facial details are exceptional, as are background and backdrops as the powerful teenager tears her way through the agency goons. Little crushed bits of debris are instantly noticeable, as is the gooey red blood that squirts from bodies during the destruction. I did notice the typical banding in low light shots, but it is fairly minimal, and usually only noticeable in the opening act, as well as a transition from a dark to a light scene.

The 5.1 DTS-HD MA track is no slouch either. The first couple acts of the film are more dramatic based, and has a very laid back feel to it. Dialog is the main focus, but the surrounds get some activity with the hustle and bustle of a busy train, or the rumbling of the intense score as it teases us with “scary” moments. The last act is a tour-d-force though, as gunshots ring out, fists slam into walls, and various action set pieces make for a rousing action film. Bass is nice and tight, but it is not as prevalent (even in the third act) as much as I would have hoped for. Everything is well done and balanced, and even with the slightly lighter bass, the track is really rocking.

The Witch: Subversion is a very fun action movie. It blends elements of horror, sci-fi, action, and drama into one movie, and does so quite well. I do feel like the first couple of acts meandered a bit, and there needed to be about 25-30 minutes more backstory to flesh out some of the plot points introduced, but it left me feeling excited for the sequel, and instantly hitting the web to find out WHEN we’d actually get to see The Witch Part 2 (Manyeo 2). Well Go USA’s Blu-ray is quite nice, with great video, good audio, and of course the typical anemic extras found on Well Go USA releases. Definitely worth checking out if you like what you see in the trailer.