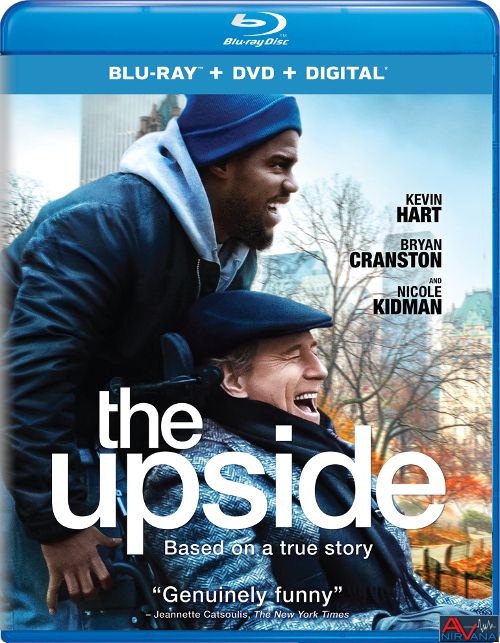 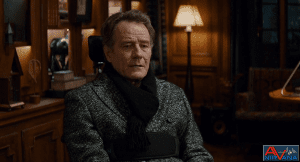 Movie
It’s pretty standard fare these days for Hollywood to take a foreign hit film, toss in some Hollywood superstars, and remake it for American audiences and sensibilities. Sometimes it works (think Let the Right One In) and sometimes it bombs badly. The Upside falls somewhere in the middle as it takes the 2011 French film The Intouchables which one COPIOUS awards over in France, and broke box offices everywhere, and recast with the strange choice of Kevin Hart with Bryan Cranston. I say strange because Bryan Cranston is a fantastic character actor, while Kevin Hart is the guy who stars in annoying comedy films where he jumps around like a rat on cocaine screaming and yelling, making jokes about his own height. Luckily Hart mans up and creates a rather intriguing, if not tamed down, character that adds some humor to the film, but maintains a healthy amount of dramatic seriousness as well. The film itself is naturally not nearly as heart warming and well done as the 2011 French film, but The Upside has some genuinely touching and comedic moments that had me smiling.

Dell (Kevin Hart) is a struggling ex-con with the work ethic of a snail. He’s just concerned with getting his parole officer off his back, so when he applies for a job as life assistant to wealthy Billionaire Philip Lacasse (Bryan Cranston) he doesn’t exactly expect, now what, the job offered. You see, Philip is a quadriplegic who is bitterly waiting to die as he’s lost the will to live due to his condition. Seeing an opportunity with the slovenly Dell, Philip refuses all other applicants and offers the ex-con a con (against all protests from his executive Yvonne, played by Nicole Kidman) the position. The two mismatched foils of life soon begin to get into the daily grind of things. Philip is amused and actually entertained by the ex-con’s blunt outlook on life and soon the two start to develop a strange sort of kinship.

As with all these American remakes, the subtlety flies out the window with Hart and Cranston playing off of each other’s strengths with sappy and (usually) humorous results. Cranston’s Philip is more in need of entertaining than anything, and Dell’s brash nature and penchant for bad jokes actually starts to cheer the old billionaire up. The two bond over Opera, crank calling people, getting high to help alleviate Philip’s nerve pain, and generally keeping the quadriplegic’s mind off of what he’s lost, and on what he has. There’s some changes to the original true story, mainly to do with Kevin Hart’s comedic stylings as well as shoehorning a romantic interest in the way of Nicole Kidman’s Yvonne. 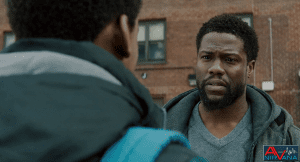 The story is sweet and rather endearing, with it’s only major fault being that it follows in the path of so many Hollywood remakes and suffers from large swathes of cliched moments. However, those cliches are tried and true so many of them are comfortable and well trodden. Hart is surprisingly toned down for this move, and his comedy is relegated to light hearted joking rather than his normal ADHD “little man” humor. Cranston is fantastic with every facial expression that he can muster for his limited mobility, and the two actually make a rather engaging couple of friends. However, the counterbalance to this chemistry is the rather obvious cliches and “buddy comedy” tropes that allow the viewer to see most of what is coming with eyes wide open. It’s not BAD, it’s just pretty obvious to the viewer what’s coming.

Inspired by an actual true story, The Upside is fun and charming, though a bit cliched, and doesn’t shy away from making jokes and punchlines out of Philip’s disability. The rocky cliches are a bit cloying and predictable, but the chemistry between the two leads generally makes up for that shortcoming. As someone who loved The Intouchables I would HIGHLY recommend watching that if you can, but The Upside makes for an entertaining jaunt for American audiences. 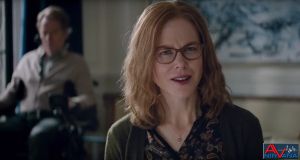 Presented in 1.85:1 framing on the Blu-ray, The Upside sports a very naturally and clean looking digital transfer (it was shot on Arri Alexa Mini and Hawk cameras and transferred to a 2K digital intermediate) that pleases on all fronts. The film opens up with a rather dim look to it, but then broadens out to a brighter look as the film goes on. The color grading is obviously blue tinged, but other primary colors pop at a party, or the rich mahogany wood (I can’t say mahogany anymore without Ron Burgundy’s voice in my head) of Philip’s book room. Facial details are incredible, allowing us to see every crease in Cranston’s face and every hair on Kevin’s scraggly beard. Backdrops occasionally look a bit soft, but textures are good and the black levels remain inky and deep without showing too much crush.

The 5.1 DTS-HD MA mix is exactly what I would expect it to be, a dramatic track that lives in the front of the room with short busts of activity. Much of the film is very dialog heavy, and as such the majority of the heavy lifting are up front in the center and mains. However, that doesn’t mean the track doesn’t occasionally stretch its legs, as there are several scenes that really do liven things up. The opening shot with Kevin driving Philip in his car is accompanied with deep weaves of bass as the car revs its engine, and the Opera and the birthday party really encompass the listener with the music and bustling of party guests. It’s never too aggressive or overly engaging, but it’s the type of track that really doesn’t NEED to be either. It’s a solid dramatic mix and does everything asked of it without question or fail.

​
The Upside is typical Hollywood fluff, taking a superior foreign film and turning it inside out and plastering American sensibilities all over it. Honestly, I wanted to be offended that they would take such a great movie as The Intouchables and remade it with Kevin Hart, but I really can’t, as the film is better than expected. I was really expecting a complete butchery of the original film, but what we got was a rather entertaining twist on the true story and Kevin Hart was not the problem in the film AT ALL. In fact this was one of the better roles he’s been in over the years and proves he CAN act outside of the man child box he’s painted himself into. Universal once again gives us a very solid home video release, with great video, good audio and a decent array of extras to fill out the package. While I can’t gush about it like I did with The Intouchables, I must say that The Upside is a genuinely fun movie. Worth a watch.

Thanks for the review. I like the trailer as well but for me, I think this is a rental once it shows up on amazon prime/netflix.