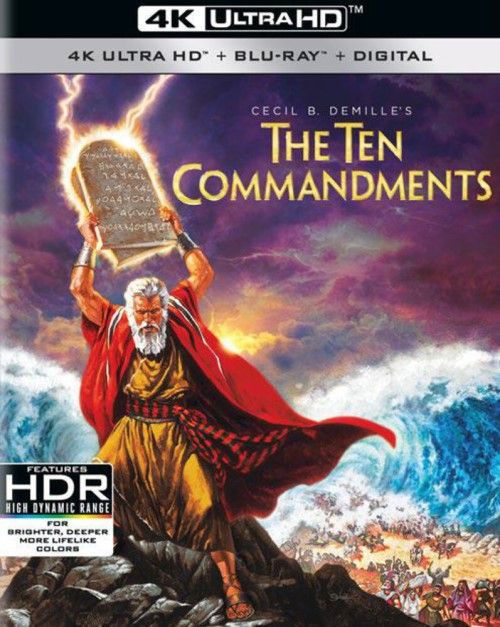 Movie
Covid-19 restrictions have really forced the studios to dig deep into their collection and pull out some classics for 4K UHD. While we've gotten some STUNNING old classics on 4K, we have had very few of the giant ones from Paramount. Mostly 80s and 90s films for the most part. This time they went back deep into the 1950s and re-did one of the most classic Cecil Demille films out there, and a doozy of a 4K boost at that!

Back in the day of the biblical epics, there was one film that sort of stood out from the rest, acting as the beacon and image that everyone wanted to be like. We had films like Samson & Delilah, Ben Hur, The Robe, and many others, each of these doing quite well for themselves in the box office. At this point in time audiences had less going on in their lives. Less distractions that would make a 3+ hour film more palatable, so these 3+ hour long epics were the pride and joy of Paramount for many years. That being said, the one film that shook the box offices and shattered records with impunity will always belong to Cecil B. DeMille’s The Tend Commandments with Yul Brynner and Charlton Heston (back when the man was basically in every epic move out there).

Cecil B. DeMille’s The Ten Commandments opens up with a single musing. Should man live under God’s rule or the tyranny of man? Should he be free under the Lord, or live at the whims of Tyrant? The film’s larger than life set pieces, star power and choice of one of Scripture’s most popular tales paved the way for this epic to be larger than it ever would have been otherwise. We all know the basic story of Moses and his mission by God to free the Israelite from the yoke of their Egyptian slave masters at the time.

Moses (Charlton Heston, in all his sandy haired glory) was a Jewish child that was set down a river and adopted by the daughter of King Sethi (Cedric Hardwicke) of Egypt. Growing up in the courts of the king had it’s benefits, and soon Moses became the apple of the King’s eye. After returning from a successful military campaign in Ethiopia he is ordered to oversee a giant city’s creation in honor of the King. However, despite the cherished status of Moses, his half brother Ramses (Yul Brynner) is jealous of his brother’s successes, as well as the affections of Nefertiti (Anne Baxter), who is destined to marry the next Pharaoh of Egypt (hopefully not Ramses). 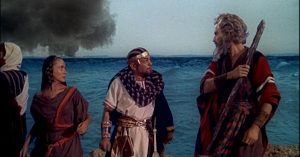 As Moses works closely with the Jewish slaves he begins to understand their plight and sympathize with their suffering. He even goes so far as to authorize the slaves be fed extra rations and have a day off to rest, something which ingratiates the Egyptian in name only to the Jewish people, and further pushes a wedge between himself and his “brother” Ramses. When Moses becomes TOO popular with the people his half brother wheedles the king into doubting his adopted son, and even goes so far as to banish the man into the desert so that Ramses can take the throne AND his bride without the competition.

However, God still has had a plan for Moses from the beginning, and speaks to him through the burning bush, commanding the banished slave to go BACK to Egypt and warn Ramses to let his people go, or suffer the consequences of an angered God.

I always chuckle a bit when watching The Ten Commandments, as the film is more of a “based on a true story” type of situation rather than a direct recreation of the Biblical story. Huge portions are heavily dramatized and fictionalized, but the general framework of Moses and his ascent to the great liberator is still intact. I don’t view it as direct scriptural at all, but the movie was an epic FILM, which is really where the production shines. This was by far one of the most lavish and enormous productions of it’s times, and DeMille really went all out. The special effects were top notch for the 1950s, and the near 4 hour film shook box offices around the world. The star power of Yul Brynner and Charlton Heston was enormously compelling, and the movie just resonates home with fans of epic sword and sandal films everyone. 84 years later the movie is a staple in many households, and Paramount continues to lay the golden treatment down for it as well. 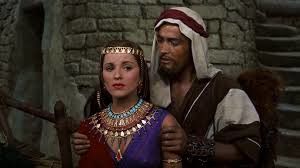 The master for this disc was struck from the same 6K remaster that was done in 2011, and what both the regular Blu-ray and the Digibook used as their master, and is still a stunning piece of work. What was great on the Blu-ray is nothing short of sumptuous perfection in 4K. The 6K remaster is jawdropping, eeking every last bit of detail out of the picture that they could get. The colors are amazing in their clarity and sharpness, and the detail levels are superb. I haven’t seen a transfer this fantastic for an older film since Sony’s Lawrence of Arabia 4K UHD disc a year or so back.

There’s a few wonky things that modern audiences will have to get used to, such as the matte lines being blatantly obvious (not a flaw in the transfer, just a limitation of 1950s technology in regards to optics shots and splicing two different scenes together). But the costumes and set pieces and details that the film produces far outshines the already fantastic Blu-ray, and I don’t think even a new remaster could do any better than what we’re seeing today.

Paramount mentions in their release documents the following

As part of the restoration done in 2010, the film was scanned in 6K and those files were the basis for this brand new Dolby Vision version, which shows off the full beauty of the original VistaVision negative. The VistaVision format used special cameras to feed 35mm film into the camera horizontally in order to capture a wider image spread over two 35mm film frames, giving VistaVision twice the resolution of regular 35mm film. In addition, Paramount spent well over 150 hours doing new color work and clean-up on the scan. The move to Dolby Vision created the opportunity to further improve the look of the film: blacks are enhanced and improvements were made to smooth out special effects mattes to create the most vibrant and pristine image possible.

Simply put, this is the definitive edition of the film to date and really showcases just how well 4K can be applied to older films. The new encode shows off more detail, more color depth, and better control over artifacts from a Blu-ray that was already stunning to the naked eye.

Instead of attempt a Dolby Atmos abortion, Paramount decided to port over the already great sounding 5.1 DTS-HD MA mix from the Blu-ray, which is something I think I prefer. Atmos is already over used for catalog titles, but a film like The Ten Commandments would feel a bit like re-imagining rather than as an enhancement. Thus the following portion of the review will be copied from our Blu-ray review of the Digipack.

While we get a 5.1 mix, just remember that The Ten Commandments was never designed to be some massive action film, even back then. The original mix is given way to a 5.1 DTS-HD MA track for the release, and the 5.1 experience is more than pleasing. The film opens with a musical number that opens up the sound stage in a soft and melodic way, and the rest of the movie makes solid usage of the advanced sound stage. Surround effects are precise and deliberate without sounding over cooked, and the LFE channel actually gets some modest workout too. Dialog is still the center piece of the mix, and it is handled with the utmost care and restoration needed to make it sound just about perfect. Vocals are clean and clear, and the rest of the mix is evenly balanced with the more talky portions of the film. All in all, a great track and wonderfully done.

Disc Two
• Audio Commentary: Orrison continues to offer her insights through the remainder of the film.
• Newsreel: The Ten Commandments -- Premiere in New York
• Trailers

The Ten Commandments is one of the best biblical epics out there, and still a classic to this day. The new 4K UHD encoding of the stunning 2011 master is nothing short of breathtaking and WELL worth the cost up upgrade for those with 4K equipment. My only quibble with the set is the lack of extras from the 2011 release. The 4K disc is a standalone, but it includes discs 1 and 2 of the 2011 release with it's extras, but forgoes the 3rd disc with the extra supplements as well as the supplementary1923 film. So for fans of those you'll want to keep your old Blu-ray sets around for the legacy features. But for the main feature alone, you really can't do much better than this. Definite recommendation.

This has always been an extremely colorful film, so I can only imagine how stunningly "sumptuous" it is in 4K after your assessment.

Sonnie said:
This has always been an extremely colorful film, so I can only imagine how stunningly "sumptuous" it is in 4K after your assessment.
Click to expand...

it looks incredible. I was drooling the entire time

Thanks for the review. A great classic movie to have.

I never thought I'd blink an eye at picking this one up. I loved the movie back when I was a child but that was many moons ago - almost half as many as Sonnie's!

If it's the right price, I'll have to pick this one up.

mechman said:
I never thought I'd blink an eye at picking this one up. I loved the movie back when I was a child but that was many moons ago - almost half as many as Sonnie's!
Click to expand...

I resemble that remark.