The Song of Names - Blu-ray Review

The Song of Names 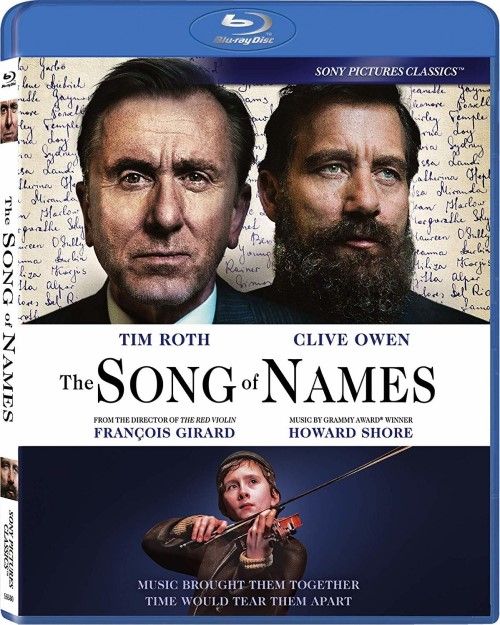 Movie
A good mystery usually is not about the resolution, or the POINT of the mystery, but about the journey getting there. The discovery and unearthing of clues that brings the investigator one step closer to his prize (the truth). That being said, The Song of Names is rather the opposite. The ending and creation of the mystery is fascinating and utterly heart breaking, but the journey to get there is a slog. A slog that is created by some rather jarring flashback sequences that fight with the main narrative in the present time, and which could largely have been avoided by telling the backstory in another way. The actors do a phenomenal job, and the story itself really IS fascinating, but the execution of Francois Girard’s (The Red Violin, Silk) period piece drama leaves something to be desired.

The Song of Names IS a mystery at heart, and a good one when you’re focusing on the actual mystery. The story originates in 1951 London, where David Eli Rapoport, a boy genius violin player, is about to give a legendary performance of Bruch and Bach, only to not show up for his own concert. The film suddenly jolts forward 35 years, where his friend and adopted brother Martin (Tim Roth at this point) is living with his childhood sweetheart Helen (Catherine McCormick) only to come upon a young boy who rosin’s his bow in a very ritualistic way. A way that strikes a sudden chord within Martin’s heart as he recognizes this technique as David’s unique way or rosining his bow. Realizing that his boyhood friend is a live and well, the 56 year old man sets out on a quest to track down David and find out what happened to him all these years ago.

It’s not a leap to realize that we WILL find David in the end (Clive Owen is listed in top billing as David, in a role like you’ve never seen him before), but I have to be careful about what I reveal, as the journey itself in Martin’s quest does require some lack of knowledge, and it’s probably best if I leave out what happens next. Needless to say, the film jumps back and forth in time, chronicling David and Martin’s life growing up. David himself is orphaned when his parents leave him in the care of Martin’s father Gilbert (Stanley Townsend), only to die after being exiled from Poland during the height of World War II. David is a bit of an arrogant jerk, but for some reason the boys form a bond. A bond which is only broken when David mysteriously vanishes at 20 years old.

Honestly, I haven’t read the novel of the same name (Sony DID send me the book to go along with the film, so I will definitely have to read it), but from what I gather the emotional impact that was so infamous in the story is missing on screen. Much of it is due to the jarring back and forth that tells the narrative. One moment you’re fascinated by Martin searching for David, then you’re suddenly jerked back in time to visit the two boys growing up. Back and forth this goes in a plodding manner until the massive reveal in the third act. A reveal that should be incredibly emotional and was certainly powerful if looking at it critically, but a reveal that didn’t impact me as much as it SHOULD have.

The film’s plodding center act is a bit of a chore, but that doesn’t take anything away from the fact that Tim Roth is stunning as 50+ year old Martin, and Clive Owen gave an incredibly under rated performance as David years later. The two of them propped up the story well past where it should have been, as Francois frustratingly utilizes trite dialog and his emotional climax just isn’t what it should be. Survivors guilt runs throughout the narrative with heart wrenching power, but that power remains untapped as the story just jerks around. The best part about the entire thing is just watching Clive and Tim work their craft, as the two men give some incredibly powerful performances despite the limitations of the movie structure itself.

I unfortunately couldn’t find any information on the cameras used, or the digital intermediate master for the home video release, but I’m putting my guesses on a digital shoot with a 2K master. Either way, the results are great, as the heavily stylized film moves between crystal clear 1980s time period as well as the haziness of of the 50s and early 40s as well. Some shots have a sort of dreamy, surreal, glow to them, while others are much more subdued and straight forward. Colors lean more towards earth tones and mahogany mixed with some soft pastels, but certain primary colors (such as on clothing) does pop through. Black levels are strong, but do sometimes suffer from that gauzy, dreamy, looking of the back in time shots. Clarity is still clean and sharp though, with great facial and clothing details, although some backgrounds lose some texture due to the stylized look.

The 5.1 DTS-HD MA track is just as good as the video is, even though it’s not a “wizz bang” action track. The score is beautifully haunting, and the violin elements from David really fill out the entire sound stage with a cocoon of music. Dialog is crisp and cleanly located up front, while the hubbub of the London and the orchestra liven up the mix a bit. The movie isn’t going to wow you with it’s over the top audio, but rather lull you into blissful comfort with the beauty and nuance of it all. An all around great track.

​
I really enjoy the Sony Classics niche line of films, and I was hoping to love The Song of Names more than I did. The Red Violin is a classic, and I was hoping for more of the same from Francois Girard, but sadly this is more of a middle of the road venture. Lately the Sony Classics line of Blu-rays have all been relegated to their MOD model (Manufactured on Demand where they burn a BD-R instead of press the film on a BD-ROM), and I think this is the first time I actually have reviewed one of their MOD non-pressed line. The Blu-ray disc looks and sounds great though, and while I would have liked a few more extras, they’re certainly good ones to enjoy. I hope my critique of the film has not turned you off from the movie, as it is not a bad movie at all. Just one that struggles to be great and just can’t seem to arrive at that destination. Definitely worth checking out if you enjoy period piece holocaust movies.