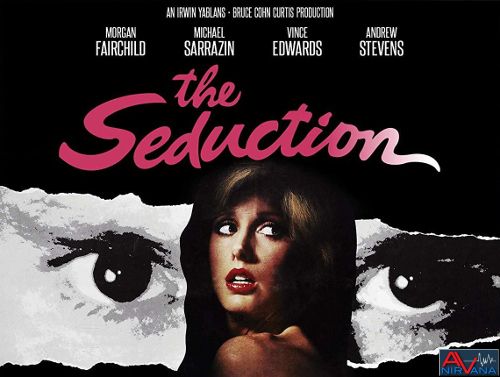 Movie
Everyone in the 70s and 80s knew of Morgan Fairchild. She was the hot and smoking blonde of the day, and was most famous for her stint in various soap operas of the day. While The Seduction is her feature film debut, it’s not her first stint in a movie, as she was the stunt double for Faye Dunaway in Bonnie and Clyde. The sultry blonde is kind of the Bo Derek of her day. Cute, smoking hot as a model type personality, but mostly known for flakey things like the soaps, or cheesy 80s thrillers where we get to stare at her. Somewhat of a cult icon today, she’s still most famous for her tour of the daytime soaps, but Scream Factory has dug up her feature film debut to enjoy today.

The Seduction is one of the predecessors to those 90s seductress horror films played by Michael Douglas (Disclosure, Fatal Attraction) and was one of those cheesy little thrillers that didn’t get much play except on late night TV during the 80s and 90s. It was dumb, stupid, and full of cliches, but it had a hot lead actress, a good looking (if not creepy) male lead, and a story straight out of a pulp fiction novel. The movie itself isn’t the greatest thing out there, but it’s a fun bit of schlocky 80s cinema that is still fun to watch today with a few drinks and a slice of pizza.

L.A. anchorwoman Jamie Douglas (Morgan Fairchild) has it all, a gorgeous boyfriend named Brandon (Michael Sarrazin), a cushy career, and a ritzy house in the upper tier of Los Angeles. However, her posh lifestyle is thrown away when she starts getting persistent phone calls from an obsessed fan who calls himself Derek (Andrew Stevens). A fan who continues to invade her space, even going so far as coming to her work to give her a gift. Slightly nervous from the attention, Jamie enlists the help of her boyfriend Brandon to get him off her back, and figures what’s done is done. But what’s done is certainly not what’s done, as Derek moves from slightly obsessed fan to full on stalker, terrorizing the poor woman with every message, and due to no proof, the police can’t do anything!

Bit by bit Derek worms his way closer and closer, only using Jamie’s spurning him as fuel for his twisted mental obsession, coming closer and closer to a violent end. When Derek finally goes too far and breaks into her house, Jamie finally takes matters into her own hands. Whatever the tool at her disposal, whether that be her good looks, a shotgun, or the police, Jamie is going to make sure that Derek doesn’t hurt anyone ever again.

The Seduction is one of those funny movie where the name has little to do with the title. Back in the 80s they were obsessed with putting sultry and suggestive names to their thrillers in hopes of making them sound more appealing, but this is a rather straight forward thriller about a crazy stalker. It’s stupid, fully of cheesy plot holes (including an incompetent police force which only adds a ludicrous veneer to the whole thing, and plenty of scenes of Morgan Fairchild pouting at the screen.

The major problem for the film stems from the fact that The Seduction is not a high profile title. In reality it’s barely better than the plot of most daytime soaps of the day, and the production values weren’t much higher. If you didn’t know better you would think this was a made for TV movie of the week. Morgan is pouty and tries to be sultry, but most of the more serious points of the movie are laughable in nature and almost unintentionally hilarious with the forced tension. You can OBVIOUSLY tell that Morgan was new at this whole feature film thing, and while the movie isn’t Bo Derek bad, it’s still just a schlocky bit of 80s cheese that is mainly worth it for the nostalgic laughs.

Rated R By The MPAA

The video quality is by far the best part of this package (outside the extras), and while I can’t find any definitive information on the master used, I’m guessing it was provided to them by Studio Canal and seems to be at least a 2K master. The film is grainy and vibrant as is the case with many 80s films. Colors are rich and well saturated (look at Jamie’s red robe), and the details are quite fetching at times. Sometimes the film gets a bit grainier than normal and there is some rough spots, but this is actually quite a good looking transfer, with no major artifacting and plenty of detail to go around.

The 2.0 Monorail track is more than sufficient at bringing the goods, although those goods are slightly dated due to the 2.0 mono format. Dialog is good, effects are punchy and have some dynamic range to them, and there’s some decent LFE baked into the track for the shotgun sound effects. There’s not much you can do with a mono track, but it’s clean and clear, with only a few short bits of harsh reverb on a few screams (they sound scratchy and stretched thin if you know what I mean). Otherwise it’s a very stable mono track and perfectly acceptable for the film at hand.

​
The Seduction is a bit of a time capsule, catapulting us back to the originating days of the seductive thriller that became popularized in the late 80s and 90s. However, it just doesn’t hold up as well as what came later and is a bit of a cheese fest. Now, don’t get me wrong, this is one of those cheese fests that is actually pretty fun and despite the layers of velveeta, jack and cheddar, is still a fun watch if you can grab it on the cheap. Scream Factory has actually done a great job of transferring the film to Blu-ray, with a good encode, and great extras as well. It’s not an actual classic, but fans of the movie will be well pleased with the home video release of the film (for the very first time on Blu-ray I believe), and newbies will want to check it out if they can. Cheesy, nostalgic watch.

Thanks for the review. I will check it out only due to Morgan Fairchild.

Will see it once on amazon prime/netflix.

I remember watching this one. In fact I had the VHS until I let my father in law borrow it and never got it back lol. I didn't care to ask for it since at the time DVD's started to come out but glad it is now on Bluray. Thanks for the review. I'll have to watch Morgan again
You must log in or register to reply here.
Share:
Facebook Twitter Reddit Pinterest Tumblr WhatsApp Email Link