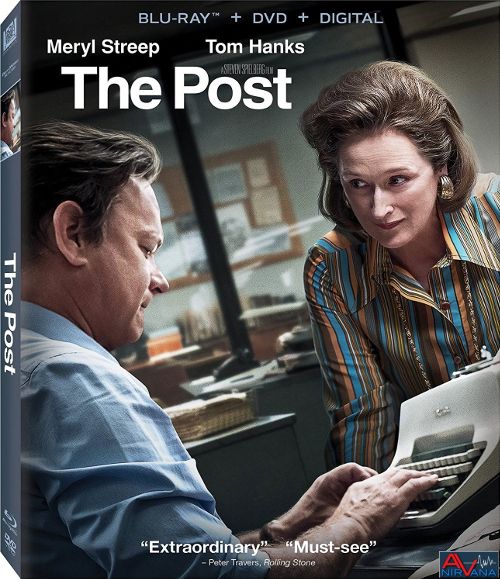 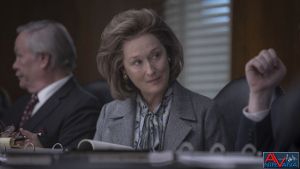 Movie
With everyone (on both sides of the political spectrum) using the term “fake news!” everywhere, it’s ironically interesting to see Spielberg tackle 1971 debacle that made up the big reveal of the “Pentagon Papers”. Well, I actually don’t think its ironic. Rather this was a film that was specifically INTENDED to be released to provide corollary to 2017 (and 2018) in regards to the national lack of faith in the main stream media that has come up due to the 2016 election. Spielberg started, shot, produced and edited the film in less than NINE MONTH in an effort to get it out during this tumultuous time in the press. However, just because a movie is a period piece with RELATIONS to something in the present doesn’t mean its a good movie, there must be MORE, and there is. Albeit barely.

The Post is a sort of “after the fact” prequel to All the Presidents Men, where the Washington Post broke the story about the Watergate scandal (and even has the last shot of the film being the discovery of the burglary of the DNC), and crafts a hybrid tale of the Washington Post publishing the infamous Pentagon Papers, as well as a personal drama about the WaPo’s owner, Kay Graham (Meryl Streep). It’s less of a story about the reporters how dug up the information and made it possible, but really a story about the top brass who braved public litigation to forge the way for it to actually get INTO the paper.

Back in 1971 the Washington Post was not the mega newspaper that it is today. Instead they were a local area paper that was doing reasonably well, but not in the same league as the big boys like The New York Times. Head editor Ben Bradlee (Tom Hanks) is keeping a close eye on his reporters, but an even closer eye on his biggest rival, the New York Times. When the NYT slams the BIGGEST scoop in current history regarding some leaked pentagon papers that showed the lies and deception of the government during Vietnam, Bradlee is rocked back. The Washington Post is just about to go public, and here they are just scooped like first year papers.

However, the same source who leaked the damning papers to the Times also decides to give Washington Post reporter Ben Bagdikian (Bob Odenkirt) the ENTIRE 47 document paper, and suddenly the WaPo is faced with an enormous responsibility. Should they post the documents in the paper? Or should they hesitate, as the Nixon presidency has already filed an injunction against the New York Times, stating national security, and if Bradlee posts this information, he could bring the entire newspaper down. Sending it up the top to owner Kay Graham (Streep), the editor is off the hook, but waits entirely on what Kay will do. As I said up above, Kay is about to bring the newspaper public, and if they post the leaked documents then they jeopardize the whole deal, but at the same time, if they DON’T publish these documents, they let down the entire premise of freedom of the press and the 1st amendment. 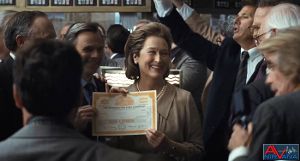 Spielberg’s period piece thriller/drama is definitely meant to coincide with today’s political climate over the demonizing of the main stream media’s bias after this latest election. The film was originally WRITTEN during the Obama presidency, but his putting the pedal to the metal and making it all come together in 9 months kind of lends credence to the theory that the prolific director wanted to invigorate some enthusiasm for the free press in an era where most people are living in disillusionment over the entire thing.

I find it kind of amusing that with all of the cries of “fake news!” going about these days, Spielberg wouldn’t try to make The Post as accurate as possible. But like most Hollywood “true stories”, The Post is a mixture of fact and fiction. The New York Times was the one who took the majority of the criticism for the leaked story, NOT the Washington Post (something they touch upon, but then cover everything from the point of view of the WaPo), and Kay Graham’s involvement with this debacle was nowhere near as much as they made it to be. Maybe it’s the cynic in me, but rushing this out in 9 months to make Oscar season (and then watch it not garner a single award) feels a bit sanctimonious, as the biggest flaw in the film is that Spielberg rushed the movie so much that he never fully developed most of the scenarios and stories to their fullest. Ground breaking drama and behind the scenes deals are a staple in newspaper dramas, but instead we’re left with speeches about “bravery” and how a couple of rich people might have to do some jail time for “doing the right thing”. Yes, I know, the 1st amendment and freedom of the press is paramount in this country, but I would love to hear about with a little less sanctimony, and a little more excitement (little side bar here, watch All the Presidents Men, as a sort of “sequel” to The Post it is simple amazing).

Now, it may sound like The Post is some boring movie, and it’s actually not. The film is littered with great performances and Spielberg stacked the deck with so many big name actors that they all are barely utilize due to the sheer enormity of them. Hanks does what Hanks does best, and so does Streep, meaning they both turn in excellent performances. The film is intense at times, and does a good job at laying the groundwork for an upcoming investigation that would soon take down a presidency (the infamous Watergate discover that WaPo published during the Nixon scandal). It’s just not a movie that feels SPECIAL (another reason that the film never garnered much love at the Oscars). 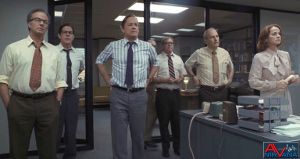 Shot on 35mm and transferred to home video on a 4K master, The Post looks STUNNING on Blu-ray. The movie is very obviously color graded in browns, yellows and greens to simulate the 1970s, but that doesn’t keep it from looking amazingly sharp and clear. The grain structure is rather minimal, and is very smooth looking (not digital smooth, just a clean grain structure that isn’t wildly busy). Colors are a bit desaturated due to the stylistic choices, but they are clean and well defined with solid impressions. Blacks are deep and inky (some of the grading gives it a slightly milky look in the dark rooms), but I can’t see any major crush or banding. Fine details are sharp and easily distinguishable, as you can see every line on Hanks face, or the individual fibers on old fashioned suits. 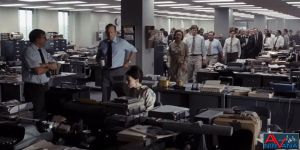 20th Century Fox once again gives the Blu-ray a 7.1 DTS-HD MA track that may SEEM to be a bit overkill for the genre, but ends up really utilizing the spaciousness of a 7.1 mix rather well. The track is crystal clear, with pinpoint precision vocals and a wicked score from John Williams. The dialog is the center focus of the track is still dialog, but the score flows evenly through the track and the busy newsroom fills in even more of the surround usage. LFE is tight and punchy, but restrained and used mostly for the score more than anything. It’s a good track and finely nuanced, and actually makes use of the 7.1 mix more than I thought it would.

• Layout: Katharine Graham, Ben Bradlee & The Washington Post––**Blu-rayTM only - Get to know the brave real-life characters at the heart of this story, Kay Graham and Ben Bradlee, who risked everything to tell the truth.
• Editorial: The Cast and Characters of The Post––**Blu-rayTM only - Learn how, once Steven Spielberg, Meryl Streep and Tom Hanks agreed to make this important film, other world-class actors also signed on!
• The Style Section: Re-Creating an Era - Visit the 1970s and the Washington Post newsroom in this engaging exploration of how the style of The Pentagon Papers era was created.
• Stop the Presses: Filming The Post - You're invited onto the set with Steven Spielberg, his collaborators and his cast as they meticulously craft each cinematic moment.
• Arts and Entertainment: Music for The Post - Steven Spielberg and composer John Williams celebrate their 44-year partnership in this moving tribute to collaboration and friendship.

I love a good journalistic thriller (Spotlight is one of the best modern journalistic films in recenter years, and All the Presidents Men is a legend), but The Post just doesn’t rise to those standards. It’s a very competently directed film, with great actors, great performances, and solid production values, but comes off a bit preachy and irrelevant in a time when it was SUPPOSED to be relevant. The score from John Williams is amazing, and I loved the special features (for once we have a decent array), but I personally left the viewing feeling like this is best as a rental rather than a repeat view.