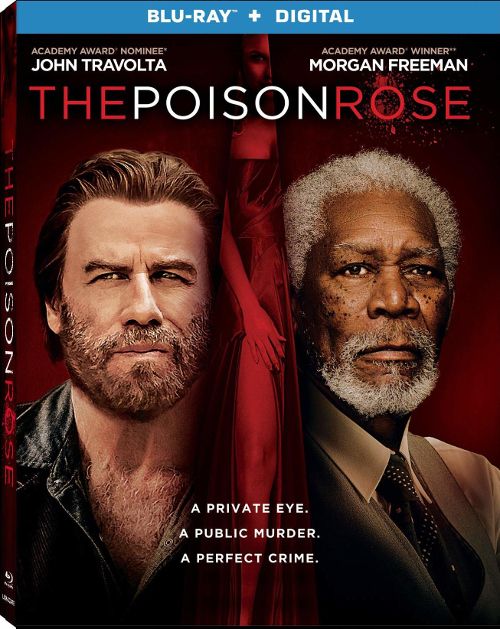 Movie
Whatever happened to John Travolta? He was a huge icon of the late 70s up until about the turn of the century when his last “big” film was in Thomas Jane’s The Punisher. He was always likable, and had an enormous screen presence, so when he sort of faded away after some personal issues (death of his son, marital problems etc) it was a huge blow to the movie community. However I was excited to see him return as an action star in the guilty pleasure film From Paris with Love (I love that movie WAY more than I really should. It’s just the perfection action cheese fest and Travolta really sells his role), but after that he has starred in nothing but one DTV garbage film after another, frittering away his legacy. I’m not sure whether he’s blackballed in the industry, whether producers don’t see him as a big draw anymore, or he just wants a quick and easy payday, but Travolta’s last 9-15 years worth of work has NOT done him any favors, nor his viewing audience either. This latest noir “whodunit” is a striking film on paper, with a ton of great actors from yesteryear, but a script that literally sabotages just about everything the actors can do to elevate the film from it’s low budget DTV roots.

The Poison Rose is an unnecessarily convoluted “whodunit” that is set back in 1978, with a sort of 50s gumshoe vibe going on. The film starts out with the typical monologue from the heavy drinking gumshoe named Carson Philips (John Travolta), talking about the “dame who just walked in” and his gambling debts. He rarely takes a case out of town, instead content to chase after cheating wives, deadbeat gamblers and the traditional Phillip Marloe type fare, but when he’s asked by a damsel in distress (and an ample bosom) to go back to his old home town of Galveston Texas and find her missing aunt, he can’t refuse the opportunity.

Heading back to Galveston brings back old memories, as he left a girl back in Texas (sounds like a country song) and everyone knows his name, which is something of a bad thing as he frittered away his football career and ruined his good name by throwing a big game. When he gets back home his investigation about the missing aunt gets thrown a curve ball when the doctor in charge of her retirement home (played by a flabby Brendan Fraser with a foppish accent) gives him the runaround. While waiting around to hear back form the “good” doctor Carson runs into WAY more than he ever bargained for when the daughter of his old flame (played by real life daughter Ella Travolta) has her star quarterback husband murdered, an old friend (Morgan Freeman) gets involved with his illicit business deals, and sleazy sheriff Walsh begins covering things up.


The Poison Rose is a mish mash of jumbled up “whodunit” tropes, and gets waaaaaay too convoluted for its own good by the end of the 98 minute run time. Most of the time we’re left wondering which mystery Carson is following next, and the script just ends things abruptly while leaving quite a few loose ends still dangling. Sadly (or happily depending on your point of view) the acting isn’t really the weak point. Pretty much everyone gives a solid performance, with John Travolta still having a lot of Charisma. Robert Patrick is solid as the sleazy cop, and Morgan Freeman is good as the rich tycoon, but sadly his screen time is really limited and becomes a fairly non consequential character. The real let down is in the writing department, as first timer Francesco Cinquemani bungles the entire thing with cheesy characters, horrible dialog, and a meandering script that really leaves you wondering why he made any of decisions that he did.

Rated R for some violence and language

I couldn’t find out WHAT digital cameras were used for The Poison Rose, but I could find out from IMDB that it was finished at 4K for the digital master. A move which doesn’t seem to translate to the Blu-ray THAT well, as the film is a bit flat and noisy. Set in the late 70s it had a drab and fairly neutral color grading, but the digital noise can swarm a lot of the time, and black levels are washed out pretty decently. Skin colors are a bit pallid and flat, while the outdoor shots in direct sunlight (such as when Morgan Freeman and Travolta are discussing business dealings out on the golf course) look quite colorful and well detailed. The film can be excellently detailed one moment, only to be murky and washed out the next, so the best way to describe the Blu-ray is “uneven”.

The 5.1 DTS-HD MA track is perfectly fine for a low budget thriller. The dialog is even and clear, and the surrounds get a moderate amount of activity from the gunshots and the ambient environmental noises. The score is evenly distributed throughout the mix and there’s some low end activity here and there as well. The film IS dialog heavy, so it can be a bit front loaded at time, but it is a generally good track that ticks off every check box and does everything asked, but doesn’t really excel past that.

The Poison Rose is a bad film for the most part, but it does have some stand out performances by some long standing actors. None of them are phoning it in (except maybe Morgan Freeman, as he’s got his typical schtick down pat), but the script writing is pretty cringe worthy. Most of the “whodunit” aspect of the film is ridiculously simple, and the “twists” are seen a mile away. It IS really nice to see Brendan Fraser again, even if he’s put in as a foppish gag character (gag in more ways than one), but overall The Poison Rose is a highly forgettable film that really will just fade into the sunset as another DTV film. Even Lionsgate’s Blu-ray specs aren’t that great, with ok video, good audio and “meh” extras. Skip It.