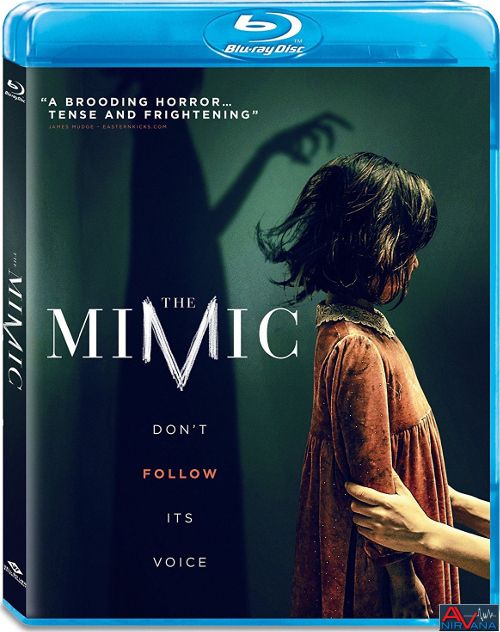 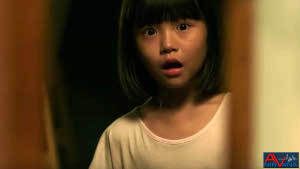 Movie
I have to admit that the moments I saw the cover art and title for The Mimic, my mind was instantly drawn to the Guillermo Del Toro’s Mimic in the blink of an eye. The cover art has all the ear marks of Del Toro’s creature feature style, and the green tone to it is strangely reminiscent of the 1997 movie as well. At one point in the trailer I wondered of director Jung Huh had taken cues from Del Toro, as the vibe was distinctly familiar. However, The Mimic is it’s own beast (sometimes literally) as the director of the Korean horror film Hide and Seek makes another entry into the genre in a twist that’s part ghost story, part demonic spirit, and part monster movie. The film has a few hiccups in the center act, but is built on a solid premise and a third act that really does deliver the terrifying goods.

The Mimic starts out with a creepy scene where a man and his girlfriend are taking his tied up wife to be walled into a deep cave (a wall that seems to have been put up in the past, and not by this murderer). However, once she is inside the walled up area (reminiscent of Edgar Allen Poe right here) her dead body begins to beg for mercy, only for the film to jolt forward in time to Hee-yeon (Yum Jung-ah) and her husband Min-ho (Park Hyuk-Kwon) as they are in the midst of a life changing move. The movie plays things close to the vest at first, but it’s obvious that the couple are moving to the country in order to escape their past. Min-ho’s mother, Soon-ja (Heo Jin) is in the early stages of dementia, and the couple want to leave and take care of her in the old lady’s final hours. But there is more underneath the surface. Hee-yeon is beside herself with grief for losing their only son 5 years ago, and this move is one of the couple’s only hopes in salvaging what is left of their life.

The cave’s purpose is soon revealed when it becomes known that this evil place is just a short jaunt into the woods from where Min-ho and Hee-yeon move to. Soon things start to get bizarre, as children end up missing near the cave, a Soon-ja begins hearing voices, and a strange young girl appears out of nowhere. Not willing to be scared by superstition, Hee-yeon refuses to believe the local crazy lady (there’s ALWAYS a village crazy person who you NEED to listen to in a horror movie), and latches onto the young girl, who so reminds her of her missing son. However, this young girl may not be who she seems, as her mysterious past and penchant for repeating things reveals a darker secret underneath her innocent face. A secret that very well may swallow the entire family up. 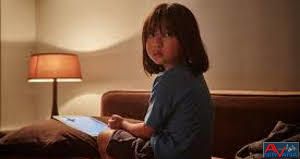 The Mimic is one of those movies that will please the horror fanatic in the viewer, but also frustrate them at the same time. The first 30 minute sets up a creepy little film, with a wonderfully disturbing opening vignette, and the typical trappings of a ghost story. But it’s once the opening 30 minutes finishes that Jung Huh has trouble getting going. The next hour is a bit of a slog at times, with creepy moments hinted at, but sadly fading away into the shadows. It’s not until the last 30-40 minutes when the tale of the Tiger and the Shaman come out that the movie starts getting really good. But when it gets good, the film really gets good, as the tone of the movie shifts dramatically and all of the backstory that we underwent in the mediocre 2nd act gets fully fleshed out. The scenes inside the mouth of the cave are truly scare worthy, and although the meaning of the mirrors and how the Shaman could travel through them was never explained, it’s a visually terrifying 3rd act that had me jumping at shadows (sometimes literally) more than once.

The acting is quite impressive for a Korean horror film. Yum Jung-ah gets the brunt of the dramatic acting, as she’s the tortured mother pining for her lost son, and she does quite well with it. You actually feel her anguish and mental breakdown building up. My only complaint with her is really due to the writing, as the final scene of the movie where we see here is one of those “come on lady!” type of scenes. Park Hyuk-Kwon doesn’t get as bit of a roll as I would have liked, but he does quite well with the material he’s given, and our little “is she a bad guy, is she not?” little Shin Rin-ah is fantastic in her creepy dual role.

Sadly I couldn’t find any conclusive information about the cameras used and the master produced for the film, but I’m leaning heavily towards the ever popular use of digital photography, and as for the master? Well, I’m not exactly worrying about it as the Blu-ray is nothing short of stunning. The Well Go USA mastered film is exquisitely detailed, with razor sharp detail across the board. You can see everything to the utmost perfection, with the grocery store that Hee-yeon loses her son in showing ever little bit of the chaos. The colors tend to lean towards natural coloring, with slight tinges of tan and blue/green thrown in as well. The beautiful Korean countryside is filled with gorgeous greens, earthy browns and some lovely shades of blue that just mesmerize the audience. Blacks in the cave are deep and inky, and the only thing keeping this picture from getting a perfect score is some milky looking blacks near the beginning, and a little bit of banding in the background (something fairly indicative of most Well Go USA releases)

Easily the highlight of the movie, the Korean 5.1 DTS-HD MA track is a real crowd pleaser. From the moment the opening vignette starts, we’re given a massively wide sound stage, with creepy and ghostly whispers flickering about the speaker system. Voices change direction at will, and the use of ambient noises in the ever present background makes for an incredibly immersive experience. The dialog is always perfectly intelligible, and evenly balanced with the dynamic range the film employs. Whispers are pin point precise, while in a split second thundering crashes and bangs reverberate throughout the listening position. LFE is deep and powerful, plying the listener with wave after wave of things crashing, smashing, and just the simple (yet powerful) score that crushes down on you. Simply put this is an amazing example of a how well a 5.1 track can hold up in the days of 7.1 and Atmos.

The Mimic may not be a Guillermo Del Toro monster movie, but it is a creepy little film that has some really great moments. Sadly mostly those moments occur during the opening and ending acts, and we have to go through a rather slow burning 2nd act to get to those great moment (the cave scene really is excellent). Jung Huh really had a film here that could top 2013’s Hide and Seek, but he wasted time in the center with a whole family drama that could have been sidelined and really made the movie more streamlined. Still, it’s a fun watch for horror fans, and I’m always pleased when other countries can dish out the scares. Definitely worth checking out as the Blu-ray is privy to some great video and stunningly perfect audio scores as well. Like usual, the disc is devoid of any meaningful extras, but still definitely worth watching.

I will check it out. Thank you for the review. Like you I saw the cover the other day somewhere online and thought it was the 1997 Mimic.