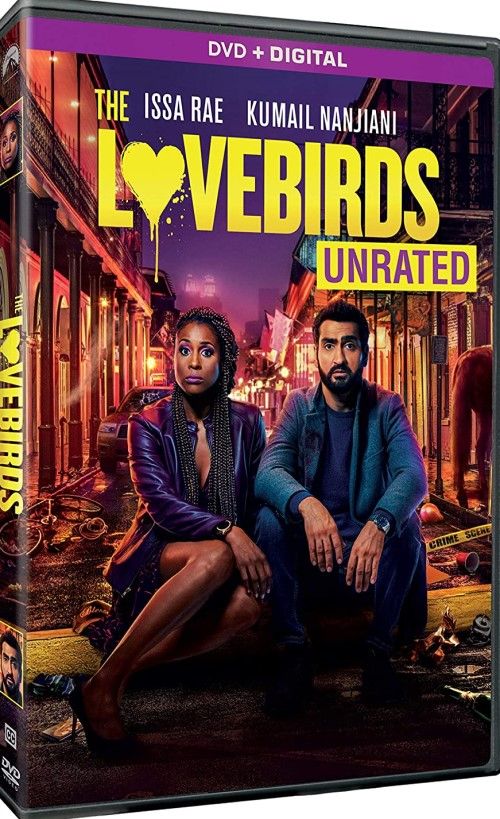 Movie
The 2020 Pandemic royally messed up a looooooot of films, and completely rewrote the new release landscape as studios realized that direct to streaming major releases was possible. That being said, part of me is really sad about the lack of theatrical releases that we’re still seeing, as actually GOING to the movies was such a big part of the experience. Seeing a movie hit digital just doesn’t seem exciting and engaging like it used to. Movies I once looked forward to are now being put “in the queue” and forgotten about when they hit a streaming service, and I for one really do miss the whole experience. Loud children in R rated movies and sticky floors included.

The Lovebirds was originally scheduled to release in theaters the same time as New Mutants back in April of 2020 via Paramount, but after the shutdowns Netflix bought the rights to the film from Paramount, and the flick got released in May of 2020 on Netflix’s streaming service. Like I said above, It got stuck on “the queue” for the last year and I never DID get around to watching it. I mean, the trailer was completely painful to watch, BUT it was directed by Michael Showalter, who directed The Big Sick (also starring Kumail Najiani, which turned him into a leading man overnight) and is most infamously known as the man behind Wet Hot American Summer (one of the great classic raunch coms). So, I was going to give it a spin eventually, but was probably forever lost in my ever growing Netflix queue.

Well, I kind of wish I hadn’t after this. The trailer tells you EVERYTHING you need to know about the film, and Michael Showalter’s massive success with The Big Sick doesn’t strike twice, even with the help of Kumail returning with him. This was a movie that Paramount thanked their lucky stars that Netflix bought the rights to, as it was a disaster waiting to happen. It follows all of the most painful rom-com tropes you can imagine, just with two of the most unlikable leads that I’ve seen out of all the 2020 “oopsie” films.

Four years after falling head over heels in love, Jibran (Kumail Nanjiani) and Leilani (Issa Rae) are going through a rough patch. The romance has been over for a while, and the duo are fighting nonstop, despite trying to hold it together. In an effort to define their failing relationship, the two realize that they’re not really working together and decide to break up in a drive to a friend’s wedding shower. That is until they run smack into a stranger and start a cascade of events that ends up with them accidentally being part of his murder, running away from the cops, trying to figure out who the real killer is, get involved in an Illuminati like organization, a sex scandal with a senator, and of course figuring out that they actually love each other in the end. Rinse, repeat, wrap the set, and collect the paycheck.

The Lovebirds pretty much fails at everything it sets out to do. The script is nonexistent, with Kumail and Issa ad libbing their way through one scene to the next, screaming and making inane decisions, only for the audience to be left wondering just why we’re supposed to care for them. Basically it’s Tina Fey and Steve Carell’s Date Night, just not nearly as funny (Issa Rae tries to bring her race based comedy antics into the movie, and it falls flatter than Kumail’s face) and all you can do is just beg for the film to be over.


Rating:
Rated R for sexual content, language throughout and some violence

The 2.39:1 framed Mpeg2 image is good for the most part, with great detail levels and bright n’ shiny colors. Colors are deeply saturated shades of purple, red, blue and even hints of greens, with a rather natural color grading to the image. Blacks are rather deep and inky with only the typical black crush seen on DVDs to really be much of an issue. HOWEVER, this is one major problem for the encode that really just sat up and punched you in the eye, and that would be haloing, haloing, haloing. Oh...my….goodness. Seriously, every single edge, every single person, and even backgrounds just had this ring around them that just stood out like a sore thumb on my 85 inch TV. Maybe on a small screen it wouldn’t be noticeable, but the rings around everything made it look like I was seeing double images at times. Not the end of the world, but enough to really have me noticing pretty much every scene.

The 5.1 Dolby Digital track is a good mix, and really it’s only major fault is that it’s a lossy mix in a world of lossless and Atmos. The mix is robust and action filled, with lots of surround usage during the car chases and gunfights. Vocals are crisp and clear in the front of the room, and outside of some bass that feels a bit boomy, this just works on all levels. Nothing outstanding, but certainly quite good for a DVD release

The Lovebirds is just plain unfunny. Kumail and Issa are not really meshing AT ALL on screen, with only Anna Camp coming off as remotely entertaining (even though she’s badly underutilized). It’s been done to death, and death is really what this movie deserves. Michael Showalter has shown great talent as a writer over the years, and I was REALLY hoping for another The Big Sick, but sadly the entire production just falls flat on it’s face. One thing that has me scratching my head is the availability of the Blu-ray edition. Paramount sent the DVD for the release to review and while I notice that a Blu-ray release is supposedly out there (at least many a retailer has a spot for it) the Blu-ray is basically MIA on release date. No one has it, and no one can seem to find out if it’s ever being released, or if the web references to it are just old place holders that never materialized. Either way, the DVD looks and sounds ok, and even has some decent extras, but nothing can make up for a nonexistent script with co-stars that have 0 chemistry. Skip It.