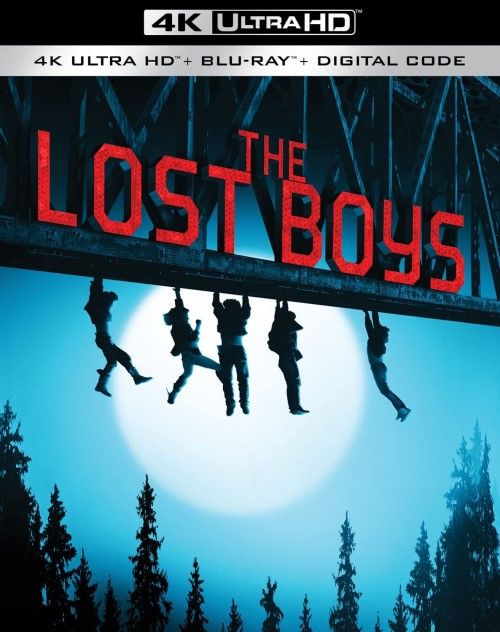 Movie
There are very few movies that literally exude cult classic status as 1987’s The Lost Boys. Not only is it an 80s horror movie (which I’m a huge fanatic of), it’s a cheeky blend of dark humor, The Goonies, and heavily influenced classic Bram Stoker and Nosferatu lore. The movie was “THE” movie to watch if you were a hipster cult film fan back in the early 2000s, and still manages to be a huge hit even to this day. It’s witty, vicious, cleverly fun, and manages to blend the mish mash of varying styles together nearly seamlessly.

Newly divorced Lucy (Dianne Wiest) and her two sons Michael (Jason Patric) and Sam (Corey Haim) are forced to move in with her eccentric taxidermist father (Barnard Hughes) down in Santa Carla California. Everything seems fine for Lucy, but Michael and Sam are trying to process the move from Phoenix Arizona down to the more “modern” world of So-Cal. While Sam falls in with local comic book brothers Edgar (Corey Feldman) and Alan Frog (Jamison Newlander) who warn the boy of impending doom by vampires, Michael ends up chasing after a girl (isn’t that always how it is?). Turns she’s an enigmatic beauty named Star (Jami Gertz) who hangs out with the local bad boys who spend their night picking fights and getting into trouble. Michael ends up following David (a 21 year old Kiefer Sutherland), the leader of the bad boys, and Star back to their lair where he ends up trying to fit in.

Unfortunately his actions of “fitting in” have sort of doomed them all. Turns out that David turned him into what we all know as a vampire, and it’s only a matter of time before he completely turns and kills a human for the very first time. Now it’s up to Sam and the Frog Brothers to help Michael get Star and another half turned vamp away from David’s clutches, and end the vampiric rein of terror by killing David once and for all.

What makes The Lost Boys so fascinating is how it can walk a tight rope between genres to incredibly well. The first act of the movie is pretty much your typical coming of age movie, with dark and moody atmospheric tones that feel more like a cult thriller than anything. We’re not able to see who the vampires are in the first act as their murders are shown as POV, but we all know who they are and pretty much what’s coming. Then we have a typical dark comedy that feels like the Goonies, the Frog brothers doing their best to be super duper vampire killers, despite being young teens. 2nd Act drops the “ok, this really could be PG-13” act during Michael’s initiation into the brood with what is actually a pretty brutal murder scene of a group of punks. This is the sharp twist in the film that sends us careening down a violent display of action as Michael, the Frog Brothers and Sam take on the vampires with bloody gusto.

At the same time we get to see flying wire work battles that remind me of the old Nosferatu vampire movies, as well as classic vamp lore that you would see in a Bram Stoker work. It’s actually really clever, and one of the reasons that the film has remained so relevant all these years. It’s goofy as all get out, but it’s violent, a clever twist on classic vamp tales, and manages to keep all the vying genres balanced JUST enough that you’re laughing at the jokes, reveling in the gore, and tipping your hat to the good old vampire legends. Not to mention that it has everyone looking like they came out of a late 1980s Guns n’ Roses or Bon Jovi concert with all the teased hair, leather outfits, and ripped muscles. Heck, it even has a 22 year old Alex Winter (Bill S. Preston, Esquire as you might know him) as a mulleted vampire minion of David’s.

The Lost Boys gets a brand new native 4K remaster for film’s 35th anniversary and it looks sumptuous. The film will never look shiny new, but it is impeccably done nonetheless. The movie just OOOZES 1980s visual appeals, with cross lighting, heavy dark levels, and some amber and red tones that give the movie a very oppressive feel (intentionally so according to Joel Schumacher). It has a beautiful grain layer that is very apparent at all times without being obtrusive, and a heavily darkened color palette. One thing I noticed when comparing the Blu-ray (both the one included in this set as a combo pack and my old 2008 disc) is that the Blu-rays look overly brightened and slightly washed out compared to the UHD. The UHD just is so beautifully black and deep with inkiness while retaining shadow details and colors that I can’t help but simply ignore watching the Blu-ray from here on out. The Blu-ray was ok back in 2008, but wow, it definitely looks fantastic in 4K UHD.

Just like Poltergeist, Warner Brothers hasn’t just recycled the old 2008 Blu-ray by putting it in the set, but rather used the same new 4K master used for the 4K UHD disc to mint a new Blu-ray disc. It also shows solid improvement over the 2008 disc, giving it a much more stable look with better colors, less DNR and smearing, and a brighter look that is more appealing. It still doesn’t compare to the new 4K UHD disc though.

While The Lost Boys was originally shown with stereo tracks, there was evidence that the 70mm prints used a 5.1 mix straight from the studio, which is most likely where the 5.1 mix came from that all the home video releases have used since the Laserdisc days. Sadly the 2.0 mix is nowhere to be scene, and the 5.1 Dolby TrueHD track from the old 2008 Blu-ray has been repackaged into DTS-HD MA. The tracks are 99% the same mix, but even after level matching and playing both tracks at the same reference mix, I’m actually giving the nod to the new DTS-HD MA track. It’s a bit punchier, a bit more pop on the high end, and doesn’t sound as harsh to my ears. The mix still has some harshness to the highs (especially the laughing yells), but the over arching Cry Little Sister by Gerard McMann comes through beautifully, and there’s some hefty weight to the mix when the vamps attack. All around good track that has held up rather well over the last 14 years.

• Audio Commentary with director Joel Schumacher (on Blu-ray and 4K disc)
• The Lost Boys: A Retrospective
• Inside the Vampire's Cave
-- A Director's Vision
-- Comedy vs. Horror
-- Fresh Blood: A New Look At Vampires
-- The Lost Boys Sequel?
• Vamping Out: The Undead Creations of Greg Cannom
• Haimster & Feldog: The Story of the 2 Coreys
• Multi-Angle Video Commentary for selected scenes
-- Corey Haim
-- Corey Feldman
-- Jamison Newlander
• A World of Vampires
• The Lost Scenes
• "Lost in the Shadows" Music Video
• Theatrical Trailer

Yeah, The Lost Boys has it all. It’s pure 80s magic, with Joel Schumacher blending multiple genres together seamlessly, and has just the right cast and indelible sense of fun that makes a classic a classic film. The 4K UHD looks a lot better than the aging 2008 Blu-ray, and comes with all of the legacy extras as well. I can’t recommend the film enough on a personal level, and the upgraded specs makes it a very worthy upgrade for fans who want a film to look like actual film. Highly recommended.

Thanks for the review. I remember this one.. Will have to revisit it.

There were 3 in this franchise, If I remember correctly.

This was the first one and then there was a part 2 (the tribe) and then another one part 3 (the thirst)..