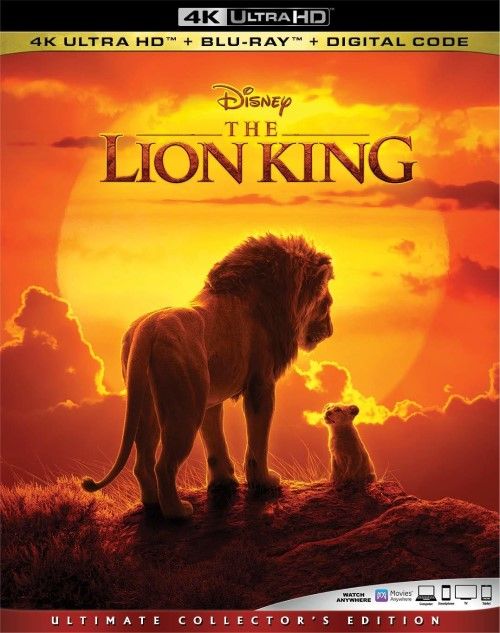 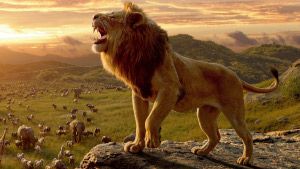 Movie
Of all the beloved Disney animated classics, I doubt ANY has been as wildly socially popular as the 1994 film, The Lion King. It’s been made into a musical, had countless soundtracks and scores releases, had a successful TV show spinoff with Timon and Pumba as the leads (Disney’s side characters were usually their strongest points from the classic era), and it has been labeled the #1 Disney movie of all times in both sales and popularity. Part of that could be because the film was so heavily shakesperean in nature (seriously, this is “Hamlet” with lions if you think about it), so you can bet your last red cent that Disney was chomping at the bit to get it remade into a live action film like they have been doing with all of their others lately. Sadly, this suffers the same fate as Beauty and the Beast, having lots of pomp and flair, but lacking the soul and heart that made the original animated film so widely loved.

A new prince is born to the African pride rock lion clan. A little boy named Simba (voiced JD McCrary as a child) to King Mufasa (James Earl Jones reprising his role) and queen Sarabi (Alfre Woodard). Everyone is ecstatic to meet the new prince, except for one long figure. Scar (Chiwetel Ejiofor), the weakened and bitter brother to King Mufasa. You see, with the new prince on the throne, his right of succession is pretty much nonexistent, especially since he has no hope of physically overpowering Mufasa either. Craftily and cunningly, Scar watches the young prince grow, only to slowly try and wheedle him into more and more dangerous situations, hoping nature will take it’s course. Unfortunately nature is a bit slower than necessary, so Scar teams up with the conniving hyenas to lure Simba and Mufasa into a death trap.

Despite his best efforts, Mufasa is the only one dead, while Simba is left for dead after falling down a ravine. Thusly he can take his “rightful” place as King of the Lions, leaving Simba to slink off into the night after watching his father die. Luckily for the poor cub, he’s taken in by a kindly warthog named Pumba (Seth Rogan) and his wise cracking Meerkat friend, Timon (Billy Eichner). There they teach the young prince to live life one day at a time, carefree and without any responsibility in their seclusion. But as these things always do, fate comes a knocking, drawing Simba back to Pride Rock to take vengeance upon his uncle for Mufasa’s death and take his place as the rightful ruler. 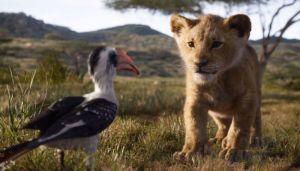 The Lion King is a decent movie, but it just lacks the soul and heart of the original. The movie works as a national geographic set piece, with gorgeous visuals of African landscapes, but the movie (much like Beauty and the Beast) can’t seem to decide whether it wants to be it’s own thing, or be a clone of the original. Which means that you’ll have entire scenes that are near word for word from the 1994 film, only for others to be completely reworked and done differently. Many times only cosmetically, as they would take a specific scene from the original and just alter the wording slightly, usually just enough to NOT be the same thing, but still be so similar that long time fans will easily see the similarities.

The best part of the entire movie is probably gawking at the visuals. Disney out did themselves this time, as they blended CGI and live action so seamlessly that you can’t tell where the CGI ends and real life begins. Or even if the movie IS CGI, or just live action? Or no live action at all! To put it mildly the animation and CGI is so incredible that I had a really difficult time trying to discern whether some scenes/characters were actually animated or not. There’s some seams and chinks in the digital armor here and there, but this is just lovely to look at from any angle.

The voice acting is well done, with James Earl Jones reprising his iconic role as Mufasa once more. The only thing is that he’s gotten a bit older and he’s having a hard time having that powerful commanding voice he once held as a result. Still, it’s great to see the guy back in the saddle 25 years later, as his voice is recognized worldwide for this role. Everyone else does a good job, especially Seth Rogen as Pumba. My only disappointment here was Nathan Lane not being Timon and Jeremy Irons not being Scar. They hammed their roles up so magnificently that it’s REALLY hard to replace them. Chiwetel does a solid job as scar, but he’s a bit less menacing here I noticed.

Rated PG for sequences of violence and peril, and some thematic elements 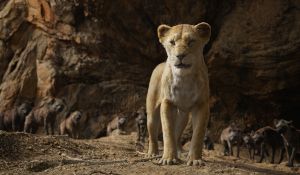 For a 2K resolution mastered film, The Lion King looks absolutely amazing. Supposedly shot at 6.5K with digital cameras, the film was unsurprisingly mastered only at 2K due to the effects heavy nature of the beast (seriously, at least 50% of the movie is CGI). However, even though this is an upconvert, the 4K UHD transfer is nothing short of amazing. The first opening shots of Simba being announced at Pride Rock is just stunning. Bright orange and earth tones dominate the screen, with splashes of green background and bright blue skies. The CGI is so seamless that only a few times did I really notice it as BEING CGI instead of just blending in with the rest of the wildlife. The detail levels are astounding at times, showing every bit of fur on Simba’s face, as the whispy whiskers of Pumba. Scar’s gaunt and shrunken form holds folds and shadow that are distinctly visible, and even the night shots look more than revealing. This is even better than the already great 1080p disc, and the resulting image is one to die for as demo worthy material 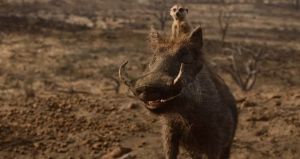 Now the thing that EVERY fan of Disney is wanting to know about. How badly compressed and crushed is the Dolby Atmos track? I’m happy to say that it’s not that much at all. Sure, the track is about 4 Dbs lower than your average DTS-HD MA mix, but that’s easily remedied with a volume increase. There is some slightly decreased bass levels and the dynamics aren’t AS wide as I was hoping, but this is still one of Disney’s better tracks. The voices are clean and clear, while the musical numbers flow effortlessly through all the speakers. The surrounds and overheads really get active during the stampede scene, as is the battle between the Lions and the Hyenas at the end. Bass is punchy and tight, with some good hits during the final act of the movie and said stampede. Again, this is not Disney’s BEST audio mixes, but this is still a very solid Atmos track that is even better than it’s 7.1 Blu-ray counterpart in several ways.

• Perfecting the Pride – Join the filmmakers on their research trip to Africa as they immerse themselves in the real world of "The Lion King." From the animals in the pride, to the smallest of insects and the grasslands in the savanna, experience the attention to detail that brought the film to life.
• The Journey to "The Lion King" –
-- The Music – Go inside the studio with the cast and crew as they work to honor and elevate The Lion King's beloved music.
-- The Magic – Discover how the filmmakers blended the traditional filmmaking techniques with virtual reality technology to create amazing movie magic.
-- The Timeless Tale – Filmmakers and cast reflect on the story that has moved generations and share how this Lion King carries a proud legacy forward.
• More to Be Scene – Recording studio and layer-by-layer progressions of some of most iconic moments in "The Lion King."
-- "Circle of Life" – Peel back the layers of effects and go behind the scenes of this iconic musical moment from the film
-- "I Just Can't Wait to Be King" – See all the effects, talent and fun that went into creating this vibrant version of "I Just Can't Wait to Be King" for the movie
-- "Hakuna Matata" – Join Donald Glover (Simba), Seth Rogen (Pumbaa) and Billy Eichner (Timon) in the studio for the making of this memorable scene.
• Music Videos
-- "Never Too Late" (lyric video) by Elton John
-- "Spirit" performed by Beyoncé Knowles-Carter
• Filmmaker Introduction
• Audio Commentary – By Director Jon Favreau.
• Song Selection
-- "Circle of Life"
-- "I Just Can't Wait to be King"
-- "Be Prepared"
-- "Hakuna Matata"
-- "The Lion Sleeps Tonight"
-- "Spirit"
-- "Never Too Late"
• Digital Exclusive - Pride Lands Pedia —Dung beetle shares the importance of his "roll" in the African Savanna in a fun, bug's eye view of the land and its inhabitants.

The Lion King is not a bad movie, or a great movie in reality. It’s simply going to be a movie that most Disney fans will remember as just being an “ok” experience. The movie is gorgeous in it’s visuals, sumptuous in its scope, but just a little lacking in heart and soul as it has an identity crisis over whether it wants to be a clone of the animated movie or not. The 4K UHD release is stellar, with great audio, perfect video and some solid extras. If you have the equipment, the 4K UHD disc is easily the one to get, but at the end of the day it’s a decent watch.

I love how Disney is taking their cartoon animated movies and moving them to CGI... it looks so cool to me. I have watched Jungle Book a few times... and I hope they keep it up. While the story lines may not be all that great, or maybe just good, the video makes it fun to watch.

Thanks for the review... I'll have to pick this one up.

I agree it's like a clone of the original one but still not a bad movie. The animation was really nice at the theater and I am sure it will be much nicer at home in HD.
Thanks for the review.
You must log in or register to reply here.
Share:
Facebook Twitter Reddit Pinterest Tumblr WhatsApp Email Link