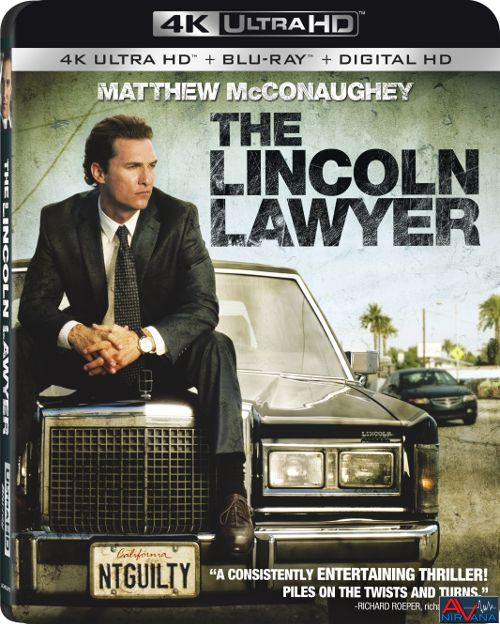 Matthew McConaughey has always been a decent actor, but he was mainly considered a fluff actor for most of his career. Sure he had some films like Amistad or A Time to Kill, but there were many more Failure to Launch or Ghost of Girlfriend's Past than the former. That is until about 2005 or 2006 when he seemed to want to get real serious. The Lincoln Lawyer was the first time I actually stood up and took notice of his acting skills and figured “this guy could go places”. Since then he’s been nailing his roles (even if the movies aren’t sure fire hits) and impressing me more and more. Much like Ben Affleck, he’s really matured as an actor and it all seemed to start right at this film.

Lawyers are kind of a controversial subject. If we’re ever accused of something wrong, you can bet your rear end that we’re thankful that we’ve got one on call, but they tend to get a reputation for being smarmy and sleazy. The underbelly of the legal society, so to speak. Mickey Haller (Matthew McConaughey) is the epitome of that reputation. He drives around cool as a cucumber in his chauffeured Lincoln Town car (thus the name of the movie), doing business at a lickety split pace for clients who REALLLY should be put behind bars rather than defended. When a bail bondsman that he’s in cahoots with named Val (John Leguizamo) gives him a slam dunk defending some rich kid, he thinks it’s just another day in paradise. Unfortunately for Mickey, this case ends up being more than he ever expected. This young kid, Louis (Ryan Phillippe) is being charged with beating a prostitute, but the kid swears up and down that he’s innocent (as they all do).

Even though the kid seems innocent, Mickey has his investigator buddy Frank (William H. Macy) take a look into the kid’s past, only to end up murdered. Now it’s a battle of “he said, she said”, and Mickey is no longer sure that this kid is on the level with him. To make it worse he’s finding more and more cases with a similar M.O. that start to lead back to this original case. A case he can’t drop out of as he’s the defending attorney for BOTH crimes. As the evidence mounts and the apparent cruelty of his client’s nature coming to the surface, Mickey is between a rock and a hard place as he struggles with his job as an attorney and his own slightly seared conscious.

Lawyers tend to get a bad rap for getting people off (or putting people away if you’ve got a real go getter of a DA), but Mickey plays the role of likable scumbag so well that you both loath and love him at the same time. McConaughey is able to play the “cool kat” vibe so incredibly well and it’s his cockiness and incredible skill at wheedling information out of people that has you tipping your hat to his slightly unorthodox methods. It’s really the second act when you come to realize that Mickey is just the tip of the iceberg and that his client is withholding some SERIOUS information that you really start rooting for him.

Brad Furman does a great job at keeping the suspense high and the audience wondering how this game of cat and mouse is going to turn out. My only real complaint comes from the fact that Furman dips into cliched territory more than once, and that his shaky camera work and sharp editing has a slightly nauseating effect on the viewer. Still, the movie is a lot of fun and one of those sleeper movies that I never would have known about until I randomly picked up the Blu-ray in a Walmart sale a few years back.

Rated R for some violence, sexual content and language

Now on to the goodies. The reason you’re reading this review. Well, like so many other new 4K UHD catalog releases, The Lincoln Lawyer was sourced from a 2K master and put out on 4K with a new HDR color encode. It seems to be soaked in sepia tones, with a solid, but not wildly substantial, increase in visual clarity and pop from the 1080p Blu-ray. The picture appears more full and clear, with the grain looking finer, and the colors ever so slightly sharper. There’s still a light layer of softness over the film, as the heavy sepia tones give it a strange look, but the contrast levels and black levels appear to have shown the most upgrade. Little things that were washed out or crushed on the Blu-ray appears sharper and cleaner on the 4K UHD, and the facial details is a bit more defined. I won’t say it’s night and day better than the Blu-ray, but the 4K UHD DOES show noticeable improvements in the little things.

I was actually surprised that Lionsgate decided to go with an Atmos upgrade for the film, considering that it really is 90% dialog. Still, I’ll never complain with an upgrade, even if only slight in nature. The track is very reminiscent of the Blu-ray’s 7.1 mix. It’s a bit of an overkill for a dialog heavy movie, but it works quite well. The vocals are crisp and well placed in the center, while the surrounds get the overflow, ranging from the court room murmers, to the rumble of motorcycles on the street. The LFE is tight and punchy with the heavy sound of a Harley motor, but once again, this OVERKILL. The track is extremely forward heavy most of the time, and the ambient noises are just that. Ambient. The only reason I’m not giving this a 4.5/5 is due to the fact that the overheads don’t really have much activity at all, which is one of the main features of the Atmos audio experience. The track does EVERYTHING asked of it with impeccable design and ability, it just isn’t asked to a whole lot.
.

The Lincoln Lawyer was one of the movies that really started to clue the audience into the fact that Matthew McConaughey was more than a pretty face. Much like Ben Affleck, he got a new career as a serious actor and while The Lincoln Lawyer is not his best, it really is an entertaining thriller. Everyone is engaging and full of life, and that ending is straight up perfect for the film at hand. McConaughey is likable and sleazy at the same time, and it’s a fun, pulpy watch. The 4K UHD is a solid upgrade over the Blu-ray, but not a wildly incredible one. My own personal opinion that it’s worth the upgrade if you can find this for a good price, rather than a day one purchase. Worth a watch.

Thanks for the review. I haven't seen this one so will add it to my watch list.

tripplej said:
Thanks for the review. I haven't seen this one so will add it to my watch list.
Click to expand...

You can get it at bestbuy for $10 this week.

Michael Scott said:
lot of solid 4K titles at BB for $10 this week.
Click to expand...

I would have picked this one up but it’s only available for store pickup and not available in my area. Did pickup Ex Machina, Red, Red 2, 3:10 to Yuma

RED and RED 2 look great. Ex Machina is solid, but the filming style keeps it from being demo material, but still very nice, and 3:10 to Yuma is controversial. I liked it , but it has some changes that make it different

Michael Scott said:
RED and RED 2 look great. Ex Machina is solid, but the filming style keeps it from being demo material, but still very nice, and 3:10 to Yuma is controversial. I liked it , but it has some changes that make it different
Click to expand...

. Also finally picked up Unforgiven. Not prime and didn’t want to pay full price, bestbuy was listing it price matched so pulled the trigger.

some people will disagree, but I like the unforgiven encode. It was very specifically color graded by Clint Eastwood himself for the 4K master, and it looks different than the normal release. However, I like the changes and don't find them too wild. Others will disagree but I don't find it too intrusive. I still keep my old Blu-ray around for the original look, but I found the 4K UHD to be a substantial upgrade IMO

wait, I just realized you said 3:10 to Yuma.... ok, that one IS controversial (my brain was thinking Unforgiven)... it has pros and cons. it's not a WILD upgrade, but it is decent. for $10 it's not a big loss either way.

That’s some good info. While I like a solid plot movie I am also intrigued about cinematography style which also entails then film grain and color style. Kinda like the film Under My Skin ( I think that was the name, with C Thereon). Hated the movie, intrigued by the style of shoot.

lol, that's a love it or hate it film. Very post modern. I admit to loving it, but only because I was completely engrossed with the cinematography (and it was Scarlett J. not Charlize)

Michael Scott said:
lol, that's a love it or hate it film. Very post modern. I admit to loving it, but only because I was completely engrossed with the cinematography (and it was Scarlett J. not Charlize)
Click to expand...

So what your saying is you really don’t like the movie...

Just like the style. The movie itself was probably the most frustrating ever, I wanted to stop it and break it over my knee but couldn’t because I was so intrigued by the cinematography I couldn’t stop watching. It was torturess in this manner.
Thanks for correcting me on the actress.