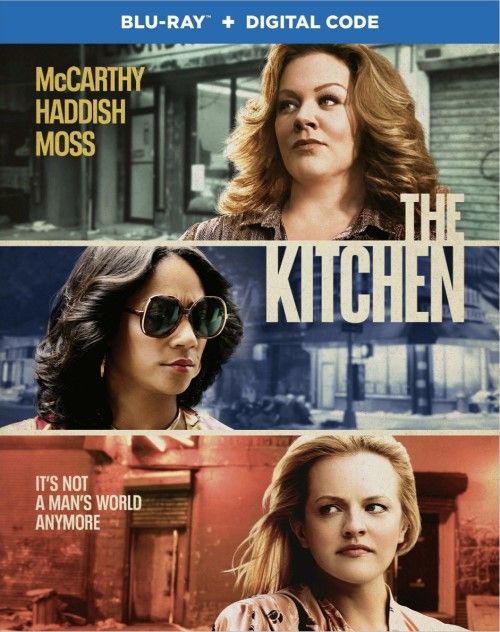 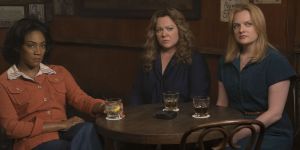 Movie
Honestly, there’s a decent movie under all the baggage and slag that comes with Andrea Berloff’s The Kitchen. Based off of a very popular 8 volume issue from DC/Vertigo, the movie tries to imitate the girl power take over of Hell’s kitchen by a group of fed up house wives of some imprisoned Irish mobsters. In theory it makes for a fun movie (sadly I have no experience with the graphic novels so I can’t comment on them outside of the fact that they were popular and well received 4 years ago), but in practice it’s a bloated and cringey affair, leaving the audience wincing and feeling sorry for the actors and actresses rather than cheering for their characters.

Kathy Brennan (Melissa McCarthy), Ruby O’Carroll (Tiffany Haddish) and Claire Walsh (Elisabeth Moss) all have their world turned upside down when their Irish mobster husbands are sent away for three years, leaving them nearly destitute and begging for help from the rest of “the family”. Kathy is devastated at the loss of her husband for three years as she has 2 children to raise, while Ruby and Claire are a little bit happier since Claire’s husband beat her, and Ruby’s husband was a drunk. However, none of this was going to keep the three girls down, as they realize that THEY have just as much strength as their male counterparts, and decided to take over the mob duties of their husband.

Soon just taking over protection rackets isn’t enough for these three. Soon they’re waging war on the lieutenant in charge of their husband’s little group, and it’s time for these three girls to show who’s REALLY boss in Hell’s kitchen. Piece by piece and brick by brick, Ruby, Claire and Kathy take over all of midtown New York, accumulating power that their own husbands could never dream of. And it’s all theirs, as long as one of them doesn’t decide to start turning on the other and ruin what has made them great, as power inevitably wants to do. 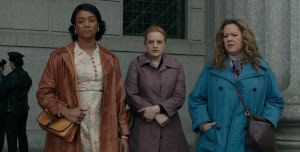 Oh boy, I really wanted to like The Kitchen as I’m a big fan of mob/gangster movies, and from what I gather the original comic book series was really gritty and well done. This movie though, lets just say that it’s not exactly a masterpiece in the making. I’m usually not one to whine and wail about “woke feminists!” in regards to a girl power movie, but you can tell some of the obvious signs from the horribly stilted dialog and attempt to make this a “we don’t need no man!” plot from the get go. In fact, I’m all FOR strong powerful women and fun girl power movies, but this just felt desperate and like it was trying TOO hard, and completely forgot to support said girl power with a decent script. The plot becomes more and more convoluted and disjointed as the movie goes on, so that by the end of the film you’re left wondering what the entire purpose was in the first place. Bad cops, good mobsters, bad mobsters, and none of the main cast fit under the “good” category.

Melissa McCarthy once again proves that she’s not a one trick comedian and actually has some acting talents. Her portrayal of the tough, yet emotionally vulnerable, Kathy is quite compelling. A move which makes her the best character in the whole movie, and sadly constrained by the painfully written script. Tiffany Haddish isn’t tooooo bad, but still feels annoying as her comedic roles portray her, and Elisabeth Moss just over acts the entire time. About the only GOOD thing I can say about the movie is the costume design and the set pieces. The production designs are absolutely IMMACULATE in regards to late 1970s culture. Clothes, backdrops, tinges of coloring on make it look truly authentic, and the editor is not just coating everything in a yellow and shag carpet green glow to tell us we’re supposed to be in the 70s.

Rated R for violence, language throughout and some sexual content 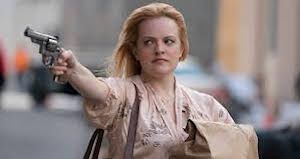 Shot with Arri Alexa digital cameras and finished with a 2K digital intermediate for home video, The Kitchen looks just about perfect on Blu-ray. Attention to 1970s details makes the backdrops and clothing appear natural to the time period, and the every so slightly burnished look to the film makes the colors pop off the screen. There’s no heavy and syrupy layer of orange and green to the image to make it look like what film makers portray as the 70s, but rather takes on a more neutral and natural tone. The image is very dark much of the time (both in tone and look), and the resulting shadows create some mild crush here and there. Still, there’s plenty of details to go around I the dark as well as the light, and the overall clarity and visual nuances are enough to make me smile with delight.

The 5.1 DTS-HD MA track is just as well done as the video is, completely with a bass heavy balance that really slams home during the more violent interactions. Dialog is crisp and well defined in the center channel, while the surrounds get a goodly amount of activity in the hustle and bustle of Hell’s Kitchen. As mentioned above, the LFE can be simply punishing, swinging with the weight of a mallet, and combined with the massive dynamic range makes for a really awe inspiring listening session. The score gets a brunt of the bass, but when things get intense gunshots and doors slamming will shake the pant legs quite impressively.

The Kitchen is the perfect example that making a “by girls, for girls” film can be just as problematic and prone to failure as an all male one. Andrea Berloff’s attempt at remaking the 2015 comic run is clumsy and tone deaf, staggering from one scene to the next and trying it’s best to make us believe this is going to be the next Godfather. Instead we’re left feeling sorry for all involved in the project as they lumber around trying to be super mean and serious. It’s a movie that I really don’t feel most people are going to want to rent, and not because it’s a “horrible” movie, but more because it’s so boring and tone deaf that it’s forgotten by the time the credits have started rolling. Warner’s Blu-ray looks and sounds AMAZING, but the lack of extras and the cringe worthy movie itself still leaves me recommending to just skip it.

Let me borrow a line from Michael, "This movie though, lets just say that it’s not exactly a masterpiece in the making."
I was also disappointed in this movie. It made one of the three characters, Claire as nothing more than smoke moving between the story of Kathy and Ruby. In some ways this movie leaves huge holes in the story the render this movie botched.