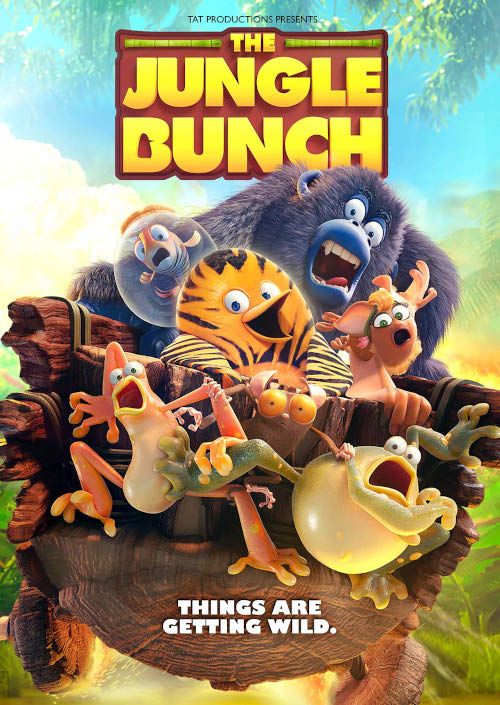 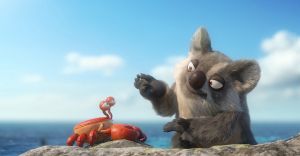 Movie
Back about 8 or so years ago I remember seeing a movie called The Jungle Bunch with the same animated characters, and got a bit puzzled. Shout Kids (a subset of Shout Factory aimed at kids movies) labeled this as coming out in 2017 and being shown in the States in 2019 theatrically, so I started digging and realized why. The original film was actually kind of a test pilot for a French animated TV show called The Jungle Bunch: To the Rescue (which just started it’s 3rd season), and actually had a sequel movie as well before the show started. THIS movie (using the same title in the States) is actually a movie based off of the TV show, and kind of rewrites and re imagines the events of the first two test films from 2011 and 2012.

The film starts out with a jungle being attacked by a pyromaniac koala bear named Igor who is intent on burning down the forest for some maniacal reason. He’s apprehended by the jungle protectors nicknamed the “Champs”. However, one of their own dies in the resulting fire and Igor is sent to a desert island to live out his days. Crushed by the loss of their own, the Champs disband and the leader, Natacha the tigress, leaves with a surviving baby Penguin (this is the weirdest jungle ever. Koalas, Penguins, Tigers all together) whom she raises as her own.

Years later this little baby penguin fancies himself a tiger as well, painting yellow stripes against his black body and having adopted a little tiger fish as his own “son” as well. Against Natacha’s wishes he decides to form a protection squad like the Champs once were and become a hero as well. Dubbing themselves “The Jungle Bunch”, Maurice and his friends (including a dimwitted gorilla named Miguel) head on out to protect the jungle from evil. However, there is something more dangerous than just day to day jungle problems out there. Igor has escaped the island, and he’s back again with a plan to destroy the retired Champs and burn the entire jungle to the ground once more. This time permanently. Now it’s up to Maurice and his friends to make sure Igor’s plan doesn’t succeed, even if he’s not exactly the hero he thinks he is.

The Jungle Bunch is a genuinely cute film, with good animation and some entertaining stories. It IS a bit trite and well trodden in its genre tropes, especially with the old “be brave, be yourself, you can be anything you want to be” mantra that gets trotted out. At the end of the day The Jungle Bunch is nothing really special, but it’s entertaining and a cute kid friendly animated show that is way WAY better than I was expecting just by looking at the trailer.

The 2.39:1 framed DVD looks actually a lot better than I was expecting. From the cover I was really expecting a super budget, super compressed looking DVD with cheap CGI. The CGI budget for a French film isn’t nearly that of Pixar and Disney, but the animation style and detail levels are quite pleasant to look at. There’s a few wonky scenes with low detail levels (usually involving motion), but up close and personal shots show a surprising amount of fine detail. Maurice’s clay paint to make himself look like a tiger shows bumps, ridges and curves, while the rough hewn skin of Goliath the Rhino is intricately detailed. Black levels are solid, but are the few times that banding is introduced into the film. Colors are bright and cheery, with strong primary representation in the mix (such as Maurice’s yellow/orange striping, or the luscious green of the jungle). Overall, this is a very nice encode from Shout Factory.

Shout has included both a 5.1 track in Dolby Digital, as well as a down mixed 2.0 track for night listening. The 5.1 mix is just like the video encode in that it’s surprisingly decent. There’s some front loading with a lot of the dialog, but the action of the Champs and the Jungle Bunch against Igor really lights up the surround channels with exploding mushroom bombs, twanging tree branches and of course the score. It’s a simple track, but checks off all of the proper check boxes to make a solid sounding 5.1 mix.

The Jungle Bunch wasn’t really well received during it’s limited edition run in theaters earlier this year by the critics, but consumers seemed to have enjoyed it (from what I could read) much more than critics, and I can see why. The film is actually much better than I ever imagined it would be, and while it’s not exactly high class in the animated movie world, is wayyyyyyyyyyyy better than some of the DTV stuff we get over here. The Animated TV show is a big hit over in France, and it’s a nice way to introduce American audiences to the show, and Shout Kids does a great job with the audio and video specs (extras are almost nonexistent). All in all, a cute watch for the kids that’s actually pretty enjoyable for adults too.

Thanks for the review. Will check with the kids to see if they are interested.