The House with a Clock in it's Walls 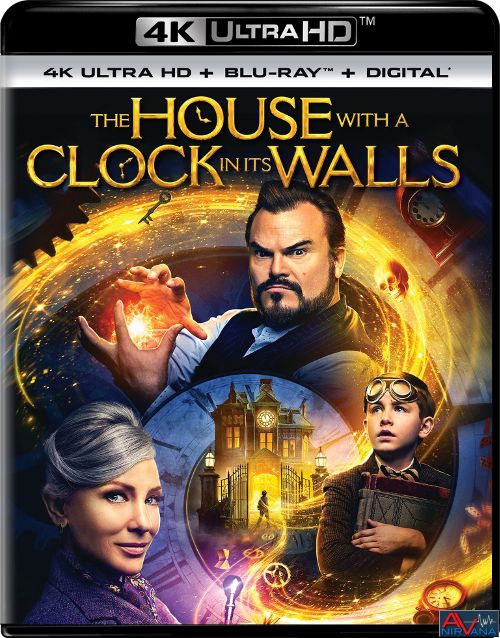 Movie
I’m going to admit that I was really rather nervous about The House with a Clock in it’s Walls when I first saw the trailer. The trailer itself seemed kind of cheesy and stupid, and when I found out that the king of gore Eli Roth was directing the film, I almost bowed out completely. How was the guy who directed Hostel and Death Wish 2018 going to make a PG rated kids flick, and one with as weird of a trailer as the one that they showed in theaters over the summer? Well, I’m glad to say that I was wrong, as House was a fantastically fun flick that utilized the unique talents of Eli Roth to bring forth funny, quirky, and entirely adventure filled young adult story that works for people of all ages.

It’s 1955 and Lewis Barnavelt (Owen Vaccaro) is a 10 year old boy traveling to live with his estranged uncle Jonathan (Jack Black) after his parents are killed in an auto accident. Upon arriving at his uncle’s abode, poor Lewis is taken aback by a strange mansion covered in clocks on the wall. To make matters worse his uncle gets up in the middle of the night muttering strange things and hacking at the wall with an ax. Besides those quirks Lewis has complete run of the house, no bedtime rules, no dinner time rules, and Jonathon is a fairly lovable guy. Sadly Lewis does pretty poorly at his new school, garnering only one friend in the process, and he’s mostly forced to hang around the house with his uncle and their strange neighbor Florence Zimmerman (Cate Blanchett).

Well, it doesn’t take long for Lewis to learn why his uncle is so “unique”. Jonathan and Florence are warlocks (and witch for Florence) and have been living under the radar at the house, which just so happens to have housed a great wizard named Isaac Izard (Kyle MacLachlan), who died last year. Jonathan tells young Lewis that Isaac Izard was a good friend of his, and offers to teach the young boy the art of sorcery. Unbeknownst to Lewis, a secret is hidden deep within this house, one that calls to the dead form of Isaac Izard, and with a few secrets from his uncle, may well bring about the destruction of the world if Jonathan and Florence do not find what they’re looking for in time.

The House with a Clock in it’s Walls is adapted from a young adult book of the same name by John Bellairs, and while I’m usually good and reading up on books like this, I have very little knowledge of the source material. As a result I went into this film completely blind of the concepts from the book, as well as of how Eli Roth was going to interpret it. Luckily I was highly impressed with what I saw. The film feels like influences of young adult cliches mixed in with Harry Potter and some of Eli Roth’s more macabre inclinations. Nothing is overly violent or gross, but he does use some great visual creep effects to make the film as disturbing as possible in a PG setting.

The film dazzles the audience with high power special effects and a story that’s actually rather refreshing. In many ways I didn’t feel like I was watching your typical young adult story with the young adult angst that is so common. There’s some similarities, but the story is unique and the end of the film is quite satisfying, and doesn’t leave you hanging for a hopeful sequel. Jack Black is actually quite engaging as the uncle, and isn’t nearly so over the top as he has been in other movies. Cate is a bit restrained and isn’t given a whole lot to work with, but Owen is more than good as the young warlock in training. All in all this was a highly enjoyable fantasy flick that feels completely unique and fresh from the hordes of other similarly themed films.

As I said in my Blu-ray review, the film was shot on Arri Alexa cameras and then transferred to a 2K master for home video and upscaled for 4K UHD. The results are typical of the style, with moderate (but noticeable) upgrades to textures and fine details, with a boost in the color department thanks to the use of HDR. Facial details show off better textures and lines, with the golden hue that was so prevalent in the 1080p disc looking more natural and skin colored (I’m not sure why, but that gold push is really strong on the Blu-ray, but much cleaner here). The mahogany wood backdrops of the mansion so very sharp textural differences, with less blurring in the backgrounds, allowing us to see the little designs and creases on the wood easier. Black levels show a significant boost in depth and clarity, with the washed out aspect of the blacks completely gone, replaced with sickeningly deep and inky black levels. The same goes with crush and banding, and the colors look amazing. The bright purple of Florence’s staff shines more richly and better saturated, while the neon reds of the doomsday clock shine bright against the inky blackness that the HDR provides.

Like usual, Universal continues to put the same audio options on both the Blu-ray AND the 4K UHD, so this section of the review will be identical on both formats. The audio experience for House is impeccably done, with tons of nuanced features and a very balanced mix that makes the track a treat to listen to. The track relies on ambiance to garner much of its praise, with the creaking of the old mansion, ticking of the clock in the background, and the high powered crashes and bangs for the more boisterous moments in the film. Dialog is always evenly balanced and cleanly replicated, while the bass is just devastating. HOWEVER, this is not one of those over cooked films that relies on bass that is overly hot to get people smiling. Instead it’s very restrained when necessary, but also very cleanly and clearly POWERFUL when things get going. The surrounds are wildly active with the ambient noises, and the overheads are used to the fullest extent with various squeaks, groans and moaning from the above floors of the mansion. Amazing audio for sure.

• Warlocks and Witches – Go behind the scenes with the enchanting cast of The House with a Clock in Its Walls
- Finding Lewis – A look at the casting of Owen Vaccaro
- Jack's Magical Journey – A look at the unique dynamism and magic that Jack Black brings to the character of Jonathan Barnavelt
- The Great Cate – The cast discuss Cate Blanchett's wonderful performance as Florence Zimmerman
- The Terrifying Isaac Izard – Watch Kyle MacLachlan's creepy evolution from living icon to undead-warlock
• Movie Magic
- The Ultimate Haunted House – Join filmmakers for a guided tour through the incredible house at the center of the film
- Automatons Attack – A behind-the-scenes look at the mechanical horrors involved in this chilling sequence
- Pumpkin Puke – Behind the scenes with the cast and an army of spooky, snarling, vomiting pumpkins
- Moving Pieces – Filmmakers and cast discuss the amazing clock room set
- Baby Jack – A behind-the-scenes look at the creepy Baby Jack sequence
• Tick Tock: Bringing the Book to Life – Filmmakers discuss how they adapted the book for the big screen
• Eli Roth: Director's Journals – Director Eli Roth takes viewers behind the scenes
- Candler Mansion
- Newnan, GA
- The Chair
- Comrade Ivan
- New Zebedee Elementary
- Wrap Day
• Owen Goes Behind the Scenes – Armed with his own camera, Owen guides viewers on his own journey behind-the-scenes of the movie
- Around the Set
- Behind the Camera
- The Big Interview
- Downtime on Set
• Theme Song Challenge – Eli Roth and the cast are challenged to come up with a theme song for the film
• Do You Know Jack Black? – The cast compete with each other to see who knows Jack Black the best
• Abracadabra! – Eli Roth performs a magic trick for Owen Vaccaro
• Jack Black's Greatest Fear – Eli Roth and Owen Vaccaro play a prank on Jack Black
• The Mighty Wurlitzer – Composer Nathan Barr discusses how he created the film's unique and distinct score

​
I’m shocked to say this, but Eli Roth has actually made a really enjoyable fantasy adventure here with PG rating on it. Seeing him do something outside of heavy R or even PG-13 is almost unheard of, and it’s a treat to watch his unique tastes unfold in children’s fantasy flick. You can see his love of the macabre and creepy come out in many scenes, but he has reined in his horror proclivities to a reasonable level and adapts John Bellairs book quite nicely from what I can tell. It’s a fun diversion from all of the Harry Potter style fantasy film and leagues better than most young adult novels being released to film these days. Universal’s 4K UHD release is a stunning disc, with amazing audio and video that is distinctly better than it’s 1080p counterpart. Along with some hefty extras this is a disc well worth picking up.

Been hearing good things about this one. On the list it goes

Thanks for the review. I watched it with my 8 year old and we really liked it except he was scared in some parts. The house to him was creepy and can't blame him.
You must log in or register to reply here.
Share:
Facebook Twitter Reddit Pinterest Tumblr WhatsApp Email Link