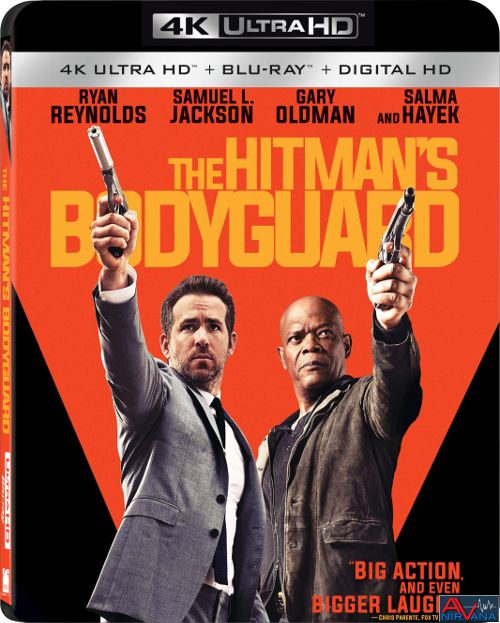 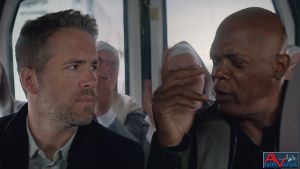 Movie
My first reaction to The Hitman’s Bodyguard was instinctually “well, this can’t be good”. Samuel L. Jackson and Ryan Reynolds have both been on a steady decline in their career for years, with the exception of Reynolds gaining a big boost with Deadpool. At the same time I was howling with laughter at the trailer and marketing lampooning Kevin Costner’s The Bodyguard, and I’m a sucker for those good cop/bad guy buddy team up films like Midnight Run or 48 Hours. Midnight Run is the first film that comes to mind after seeing this little entry, but with everything on steroids, with the roles sort of being reversed with Ryan Reynolds “cop” persona being the nervous and straight laced one, while Jackson takes over the mantra as the loud mouthed tough guy. Just in the guise of the criminal. Which sort of puts the film more in line with 48 Hours more than anything. Anyways. The Hitman’s Bodyguard actually ended up being a load of fun, with Reynolds being much more tame and restrained than he usually is (it’s actually a nice change of pace to see him in these roles) and Samuel L. Jackson is given full freedom to be...well…. Samuel L. Jackson. The movie isn’t exactly kid friendly, but it does feel a lot like those old good cop/bad guy of the 90s, just with a modern twist.

Michael Bryce (Ryan Reynolds) is a high priced private security specialist who is placed in London to cater to the big wigs and crème of the crop who require protection. He’s triple A rated (whatever that is) and runs by the mantra of “boring is good”, getting his clients out of harms way, and off to do whatever business they do. However, this all comes to an end when a sniper’s bullet takes out a Japanese arms dealer that he’s transporting and his triple A rating (if that even exists. The movie uses it as a running gag to question Bryce’s little self made utopia) is through the toilet. Now he’s stuck running around paranoid businessmen, and instead of driving the nice Mercedes, is using a rinky dink little hybrid car. But, it looks like he may actually have chance to redeem his high rolling lifestyle once more, as Bryce’s ex-girlfriend Amelia (Elodie Yung) may have the keys to his freedom. Except it comes at a price.

Amelia is an inter-pol agent who has the key witness in bringing down an Eastern European dictator in public trial (hammed up by Gary Oldman), but there’s a problem. A mole in Inter-pol has exposed her and she and her ward have been hit by the dictator’s men and are in a safe house requiring Bryce’s unique set of skills to get this man to the Hague in time. Well, it just so happens that this “package” is none other than international hit man Darius Kincaid (Samuel L. Jackson), a bit of a thorn in Bryce’s side (supposedly Kincaid has tried to put a bullet in him 28 times). Thus begins your classic tale of “I hate you / I hate you too”) buddy relationship as both Darius Kincaid and Michael Bryce do their best to get to the Hague alive. Avoiding bullets from all of the assassins on their tails, and avoiding killing each other at the same time.

I really wasn’t expecting much considering The Hitman’s Bodyguard went in and out of theaters in a matter of weeks, and the track record that the two have had outside of Deadpool and Kingsman recently. However, I ended up having a blast with the film, as it does one thing right. It sticks closely to the tried and true formula that Midnight Run setup so many years ago. Well, that and employ Jackson’s and Reynolds ability to just amp everything up with charisma and foul language (there’s a few scenes where even Reynolds says that Jackson has ruined a few choice swear words for him from over use) and love of explosive violence. The film isn’t overly brilliant, and in fact is downright simplistic in design. You know who the mole is in the agency within the first 15 minutes, and it doesn’t try to hide that fact from you at all (actually, I bet if you just hit up IMDB you could ascertain his identity due to the fact that this particular actor has made a career out playing criminals and double agents), but it doesn’t bring the movie down at all. Reynolds and Jackson play off each other flawlessly and the movie is basically non stop action and one liners, with Selma Hayek playing a female version of Kincaid that had me chuckling every time she went on a Spanish rant in prison.

Rated R for strong violence and language throughout

The Hitman’s Bodyguard was filmed with a variety of different digital cameras and supposedly finished with a full 4K master. Something that most 4K UHD discs can’t boast. The uptick in quality is apparent across the board, as you can see all the little details that much better. The tattoos on Kincaid’s body seem more intricate, and the backdrops show off minute little details as Kincaid and Bryce traverse the city. The HDR is surprisingly not THE biggest factor in the upgrade, as the blue and gray color grading don’t give a whole lot of opportunity to show off excessive color saturation. However, there is the interrogation scene, which has a lot of bright and neon colors that really pop. Black levels are appropriately inky, and the overall disc clarity is stunning, especially for a film that doesn’t benefit a whole lot from the HDR. It’s just a well done 4K UHD presentation with almost zero flaws besides the strange halo like look to the brights that was employed in the film.

Wow, just wow. If I have to label anything about The Hitman’s Bodyguard as being 100% perfect, it has to be the Dolby Atmos track contained on both the Blu-ray and the 4K UHD. Simply stunning is all I can muster on first reaction. The track is vibrant and full of energy, blasting the listener from all sides with an encompassing track that takes no prisoners. Surrounds are fully engaged with bullets flying all directions, and the overheads are given ample opportunity to show off with helicopter rotors thudding overhead, or a motorcycle leap shooting from the sides of the room, across the top, and over into the other side of the sound stage. Dialog is crisp and clean, and LFE tight and punchy. One thing I will say about the bass. I’m a fan of overcooked, overly hot bassfests that just blast the listener with deep low end waves, but The Hitman’s Bodyguard uses a much more balanced use of LFE in the mixing process. The gunshots show off incredible power, and the car engines roar to life with deep bass, but it’s much more nuanced and even across the sound spectrum, instead of just assaulting the listener with a thunderous roar. Each tone is distinct and clear, adding a multi layered approach to the low end, giving each item its own distinct pulse and depth. Simply put, this is a 100% perfect audio track that just pulls everything it can out of the Atmos experience.

The Hitman’s Bodyguard is a blast to watch, and way more fun that I was initially expecting after watching the trailer. The potty humor fits the two actors as they just have fun with the tongue in cheek portrayals of classic action film characters of the past. Ryan Reynolds is….well… Ryan Reynolds, and Samuel L. Jackson is….well… Samuel L. Jackson. A highly entertaining fact that left me with a big grin on my face despite the mediocre writing and OK action directing. The two characters just had fun with the roles and hammed it up enough to make up for most of the shortcomings on the technical side. The 4K UHD is near picture perfect for audio and video, and even the extras are pretty decent across the board. While I won’t label The Hitman’s Bodyguard on par with action classics like Midnight Run and 48 Hours (at least not at this point in time, history will be the judge of that), but it is a highly entertaining romp with lots of guns, knives, explosions, Selma Hayek, and Ryan Reynolds being a smart alec. Recommended as a fun watch.