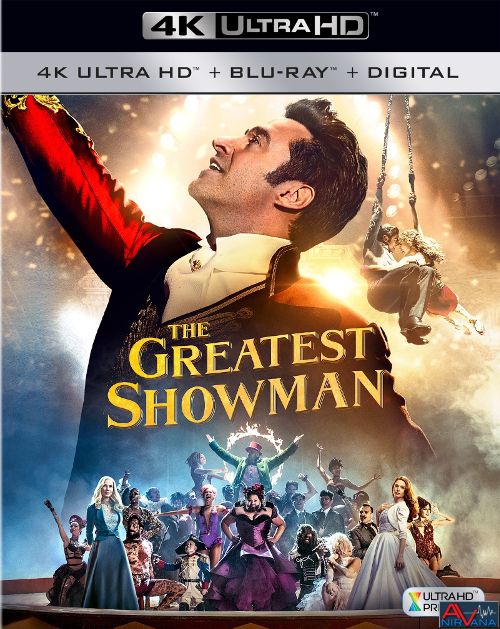 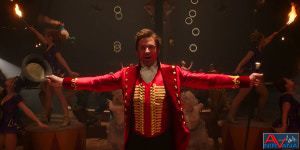 Movie
One of my fondest memories as a child was my parents taking me to see the Barnum and Bailey Circus back when I was around 10 years old. We grew up dirt poor, but I remember my parents wanted their boys to go see the circus at least once in their lives, and to this day I still recreate every scene of and stunt that the circus performed that year. The arena that they were in was small (we were in a small town at the time), but it was still HUGE to the eyes of a 10 year old, and even huger still were all of the attractions. My most used phrase from P.T. Barnum is “There’s a sucker born every minute” (although there is some controversy over whether he actually SAID that), but the most appropriate one that comes to mind when watching The Greatest Showman is “the noblest art is that of making others happy”.

The Greatest Showman chronicles the life of famed circus founder, P.T. Barnum (Hugh Jackman) and was labeled as one of the most polarizing musicals of the year. Critics either loved it or hated it, and there seemed to be no middle ground. It’s a bit of a strange phenomenon, as the movie is directed by Michael Gracey, a first time director who’s only claim to fame in the film business is directing a Natasha Bedingfield short. However, the script attracted stars like Hugh Jackman, Zendaya, Zac Efron, Michelle Williams, Rebecca Ferguson, and many more on just a simple $84,000,000 budget (simple for Hollywood at least), and raked in over $415,000,000 worldwide! Making it one of the top 5 grossing musicals of all time, but was met with varied critical response when it hit theaters. I initially missed the movie in the theaters due to an overall glut of material to watch during that time, but also because modern musicals just haven’t impressed me a whole lot. Sure, La La Land was a good film (if not a bit over hyped), but most films of that genre just aren’t able to capture that enthusiasm and “spark” that made the days of Gene Kelly, Fred Astaire, and so many more a light in our cinematic world. HOWEVER, not everything is written in stone, and I ended up completely bowled over by how much fun I had while watching The Greatest Showman

P.T. Barnum didn’t start out a rich man. In fact, he was a dirt poor tailor’s son who wanted to be so much more. Falling in love with a young woman named Charity (Michelle Williams), the young man informs her rich father that he will give her everything she could ever want. Well, things don’t always work out EXACTLY as planned, the Barnum family is stuck with Phineas working clerical jobs in an effort to get buy. It’s not until a few side words from his young daughters that the man’s imagination truly takes off and after a particularly nasty bit of being laid off, decides to go out on his own. The world loves the odd and macabre, and P.T. Barnum is going to give it to them! The only thing is, he’s not the greatest salesman and his initial enterprise is an abysmal failure. It’s not until his daughter’s make a comment once more that greatest showman on earth catches on to something BIG. Instead of showing off wax museums and weird curios, he’s going to bring the audience something ALIVE and breathing. Recruiting all of the weird and the outcasts of society, the man crafts a “circus” that stuns the base audience with flair and entertainment. 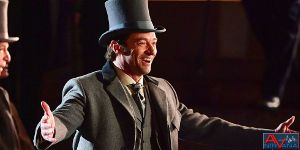 While we as modern guests may look fondly on the circus, back in the 1850s it was considered a crude “plebeian” form of entertainment that served only to cater to base desires and shock value. So, to get above that notion, P.T. goes into business with play producer Phillip Carlyle and attempts to cater to the bourgeoisie elite, even going so far as to bring in a Swedish opera singer named Jenny Lind to perform for him. But there is always a dark side to fame and fortune. P.T. soon becomes infatuated with Jenny, while his wife and children are stuck at home as he mortgages their entire fortune in order to fund his grand adventure. Little by little the man loses his grasp on enjoying life, and falls into the trap of selfishly desiring more and more in his search to prove to everyone that he is something MORE than just a simple peasant.

Right off the bat I have to say that The Greatest Showman is a heavily fictionalized tale of P.T. Barnum’s life. Many portions of it are taken straight out of history, including Jenny Lind, Carlyle, the adverse reactions of the elite and traditionalist public, but there are huge licenses taken with the narrative. Jenny Lind and P.T. Barnum having an ALMOST affair is something that is an urban legend, but one that has no basis in actual historical fact, as is the relationship of Phillip Carlyle and trapeze artist Anne Wheeler (Zendaya)…...although that is actually one of the most enjoyable parts of the movie. The same can be said of P.T. Barnum himself. In film he is a wildly kinetic man with an enthusiasm for life and showmanship, but there was a darker side to him. In the movie we see his and Charity’s relationship as something sweet (if not a bit rocky), and have him handing over the reins to Carlyle at the end of the movie while he gets to live the family life. The thing is, Barnum was a rampant egotist and his marriage was 99% Charity raising the family while P.T. Barnum sent home glowing letters of how their show was going (while Charity suffered from chronic illness and depression). STILL, this is nothing more than a nitpick on the accuracy of the film to real life, and I have to say that the nature of the movie takes its cues from the name of the film. It’s a show, and just like the circus itself, the film is a gigantic SHOW about P.T. Barnum’s life. It’s fictionalized, it’s lionized, and it’s completely and unabashedly FUN to the core.

I can’t tell you how many times I was left tapping my foot to the music and wiping a bit happy grin off my face, as the show is just majestic to watch. Hugh Jackman is the title character, and you can almost say that HE is the greatest showman ever. Jackman has been everyone from Wolverine to Jean Val Jean, and his presence on Broadway is just as prolific as his Hollywood career. He just infuses the character of P.T. Barnum with so much joy and life that it’s infectious. Even Zac Efron, who has been relegated to playing muscled douche bags for his adult acting life, excels at exuding sheer joy and charisma in every scene he’s in (and he actually gets to sing and dance after his childhood career of the Highschool Musical series). His romance with Anne Wheeler is probably one of the sweetest and most endearing parts of the movie, and I have to say, I was WILDLY impressed with what I saw. Logically I agree that the narrative wasn’t as good as say, La La Land, but the sheer exuberance and enthusiasm that is present in every single performance, and every single song that I can’t help but love this movie with every fiber of my being.

Rated PG for thematic elements including a brawl

Oh boy, now THIS is what most of us envision when we think of a 4K film. The Greatest Showman was shot using 3.4K Arri Alexa cameras and then finished with a 4K digital intermediate, and the results are nothing short of jaw dropping. The Blu-ray was spot on perfect, and I was really worried that this 4K UHD disc wouldn’t be THAT much of an upgrade due to how amazing the Blu-ray was, but I was wrong. Watching the two side by side there is no comparison, as the 4K disc easily outclasses the 1080p Blu-ray. The HDR colors are vibrant and amazing, with rich saturation levels that show up well with the garish colors of the circus, as well as fantastic detailing that had me marveling from the get go. Facial details are full and well defined, but those intimate details like stitching on clothing, or hay coming out of a costume pocket are just so picture perfect. Blacks are deep and silken, with wonderful shadow detail, even in the darkest tent, and there was almost NO artifacting that I could see with my naked eyes. Bravo Fox, bravo.

The Dolby Atmos track is just as perfect as the video is, and the film starts out with a rousing musical number complete with stomping feet that just lets the listener know they’re in for a treat. Vocals are crisp and clear, there’s great surround usage form the bustling New York City arena, but it’s the music and dance that we’re here for, and this Atmos mix delivers the goods in spades. Foot stomping, arena cheering, audience roaring, and the SONGS! Everything just flows through all of the channels with a ferocity and enthusiasm that rivals the performances of the actors in front of us. The songs were so enjoyable and the roar and bellow of the low end so visceral that I had my foot tapping along with each and every number and just fell into the center of cocoon of audio, simply floating through as I enjoyed the film. The low end is powerful and deep, so much so that I felt my sub was hitting harder than I ever expected the movie to deliver on, and the overheads are rife with all sorts of noise as trapeze artists wing over head, or the crashing down of Barnum’s arena in the fire during the third act. Simply put, this is demo material and EXACTLY why I am recommending the 4K UHD disc over the Blu-ray in a hands down move.

It’s nice to see a family friendly PG movie in this day and age that isn’t an animated children’s film, or a religious movie. I’ve noticed more and more frequently that modern Hollywood caters to the PG-13 and R-rated category more and more for adult films, and the family friendly genre has largely been pushed off to kid’s movies (which isn’t a horrible thing). So it was refreshing to watch a movie that caters to adults and children alike, while retaining a family friendly tone and STILL being a fantastically larger than life experience. 20th Century’s Fox’s 4K UHD disc is the PERFECT demo disc for 2018, and had me drooling throughout the entire thing. Audio and video are about as perfect as you can get, with the only chink in the armor being the very weak extras that was put on board. But don’t let that sway you from watching my favorite musical of the year, as the film is great and the technical specs more than make up for the lack of extras. Highly recommended.

Sorry, but not sorry

Thanks for the review. I will catch this one.

Pretty sure the wife is going to "make" me buy this one. We did catch it in theaters and both enjoyed it quite a lot. Looks like I'll have to get the UHD bluray for sure. Thanks for the great review.