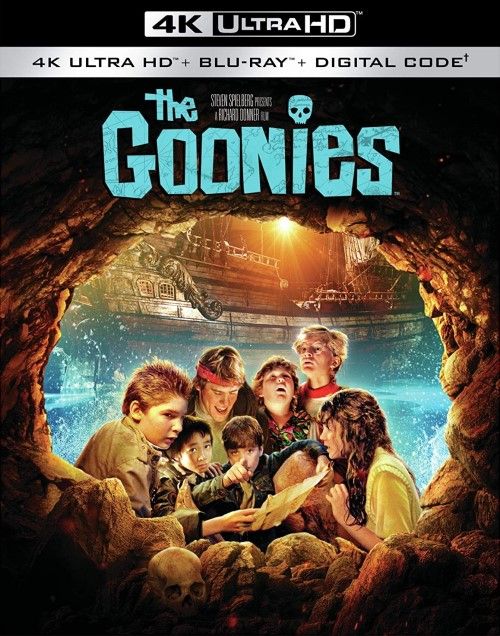 Movie
I have to admit something shameful. After watching The Goonies over 20 times during my life (sue me, I was an 80s kid) I sort of got burnt out from to much of a good thing. I watched the Blu-ray back when it came out 10 years ago (I still have the massive “box-o-swag” edition” as soon as I got it home, then I haven’t watched it in the last decade. So needless to say I felt it an obligation to watch the new 4K UHD release when it comes out and see if my burnt out self was up for seeing it again. Luckily a 10 year period to cool off has gotten me back into the spirit of the fun little flick and I felt like a teenager once more watching it for the very first time. The new 4K UHD disc is also nothing to sneer at, as it took a fairly soft Blu-ray release and fine tunes it with some excellent use of HDR and even re-releases the film in another massive “box-o-swag” edition that’s even a little neater than the Blu-ray collector’s edition.

35 years later, it’s still one of the best Richard Donner movies to date. While Lethal Weapon will probably be my favorite Donner movie of all time (Sorry Superman), The Goonies is definitely his best kid friendly film in my opinion. Teaming up with story master Steven Spielberg, it just oozes that sort of iconic 80s fun and infused it with a typical classic adventure tale that sparked the careers of half a dozen well known actors who are still around today.

Mikey (Sean Astin) and Brand (Josh Brolin as a teen) are living in the reality of bank foreclosure. Their parents have tried to keep a good face, but the reality of the situation is that they are going to lose their family home and be out on the streets. That is until Mikey and his friends Chunk (Jeff Cohen) and Mouth (Corey Feldman) find a treasure map to the infamous One Eyed Willy’s buried treasure (the 12 year old in me still giggles at that name), a treasure that everyone and their mother in the small coastal town have searched for over the course of decades. Despite being told to stay indoors while their mother is at the store, Mikey and his friends (much to the dismay of Brand) high tail it out to the coast with the map to find the treasure.

Unfortunately the treasure is not the only thing that the boys are going to find. Local criminal Jake (character actor Robert Davi) and his family (Joe Pantoliano and Anne Ramsey) are hiding out at one of the treasure map clue locations. Smelling a score, the escaped criminals decide to use the boys to lead them to their biggest score yet, which may end up making or breaking the children’s friendship, as well as their very lives.

The Goonies has held up so well because it hits all of the proper check boxes for a good adventure movie, and then some. The film taps into that innate desire for adventure and excitement, fueling the fantasy that every single kid has at that age. The fantasy to be the hero who discovers sunken treasure, saves the girl in distress, kisses the hot guy/girl, and saves their family in the process. It’s something that’s been time tested and replicated for countless decades. Books like “Nancy Drew”, “The Hardy Boys” and “The Boxcar Children” were the basis for these modern day adaptations, and films like The Apple Dumpling Gang, Treasure Island and countless more have followed in it’s wake. The Goonies is a great film, but technically one in a long line or stories telling the same tale.

The real saving grace of the movie is the non stop adventure (seriously, the movie doesn’t slow down after the first 20 minutes) and has a host of fantastic actors and child actors backing it up. The movie’s effects and the portrayal of the pirate ship is pretty dated, but for some reason you’re still able to look past the 1980s back drops and just revel in the fantasy of playing sleuth for a day while dodging criminals trying to kill you, AND getting a pirate treasure. It’s all there, and it’s there in spades

The Goonies was still back in the era when the format war was going on, and Warner Brothers was using the less efficient VC-1 encoding for their Blu-rays. Not to mention the film has always had a slightly dim and hazy look to it, considering that it spends most of the outdoor shots in the foggy world of coastal Oregon, and the rest of the time underground in a cave. So, basically not exactly eye candy. The Blu-ray was always a bit soft and underwhelming, but still a decent enough transfer. It looks to my eyes that they are still using the same decade old master used for the Blu-ray for this 4K UHD upgrade, but don’t let that scare you away. The increases in textural detail levels and overall visual clarity are quite staggering. Right off the bat you notice that the colors have been tamed just a bit, and the entire image slightly darkened. The darkening isn’t so much that it obscures details, but makes the backgrounds stand out a bit more and the HDR enhanced colors pop more. The grain levels are nowhere near as swarmy and the softness that the VC-1 codec introduced is much reduced. The film is still a bit soft compared to other 4K films due to the underground nature of the imagery, but the detail levels are much more impressive (look at the shirts the kids are wearing, or the streets and houses in the background at Mikey’s and Brand’s neighborhood). It may not be pure Transformers eye candy, but the 4K UHD disc is a substantial improvement over the mediocre Blu-ray, even while using a 10+ year old master. 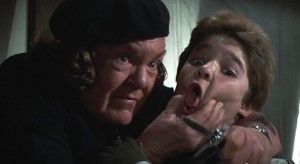 Warner Brothers hasn’t opted for an Atmos track, but instead just taken the old Dolby TrueHD 5.1 track from the Blu-ray and given it a new lossless codec, re-wrapping it in 5.1 DTS-HD MA. Real world comparison of the two? Nada. It seems to be a perfect clone of the 5.1 TrueHD track and is still a solid contender. The mix is a bit front heavy at times, but once the kids get into the underground maze and start amping up the action, the surrounds come out to play. There’s some cool background localization with rocks falling into the water at the pirate ship, as well as the rumbling of the rolling rock shifting from one portion of the sound stage to the other. Vocals are generally very impressive, but I did notice a few times where dialog was muffled. Usually due to being under ground.

The Goonies is a fun flick that has been the staple of every 80s kid’s childhood to my personal knowledge (seriously, I don’t know of a single 80s kid who hasn’t seen this), and has stayed relevant even today. The upgrade to a 4K UHD disc was a welcome addition, and the new increase in visual quality as well as a handful of different purchase options (a steelbook, a “box-o-swag” special edition and the bare bones release that I’m reviewing here today) makes this a very tempting upgrade. My only grip is that once more the basic extras are just the ones from the Blu-ray that we’ve had for 10 years, and that we didn’t get an Atmos track like we did with Beetlejuice. Well worth checking out in my humble opinion.

Thanks for the review. I will have to revisit this movie again. Haven't seen it in ages. lol.

This is one of those movies that makes me glad I have a kid, so I can continue to watch it periodically. I still have a couple fliers up in the lobby for a party we had a couple years ago where my son (now 14yo) invited a half dozen friends or so (who had NEVER SEEN THE GOONIES) for a movie party. 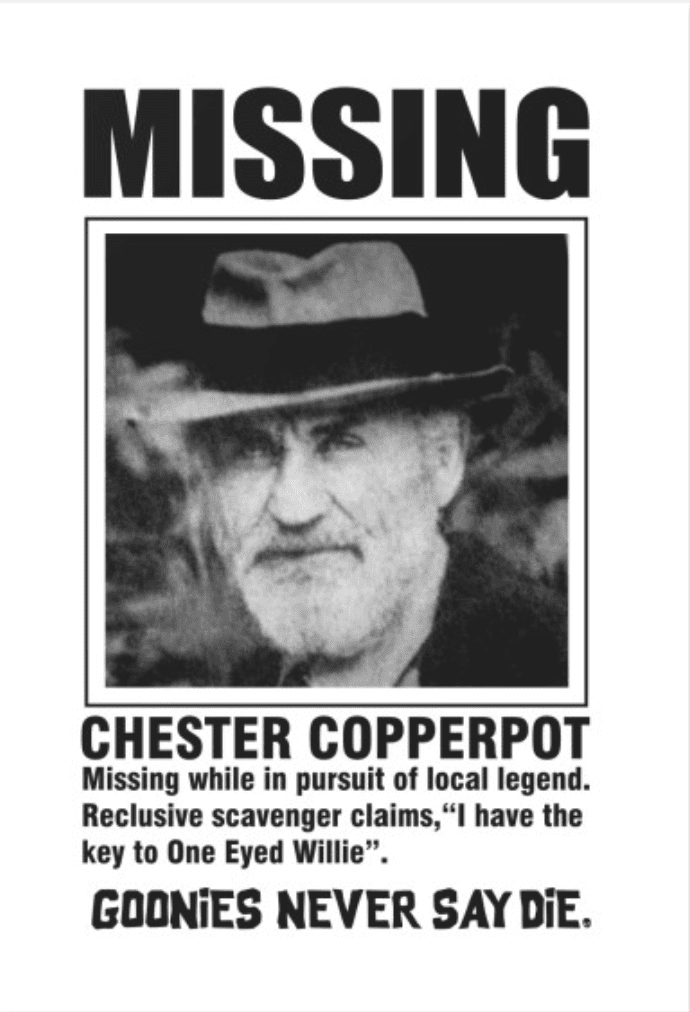 There are people who haven't seen it? Lol

Great flick! I'm putting this on my watch list to buy when there are price drops :-). I'm a little disappointed they didn't opt for a total renewed overhaul of the media. Feels a tad rushed for a classic.

It might not be a brand new master, but it was taken from a Spielberg approved transfer and very much a big improvement over the blu-ray

Mike, are a lot of these classics planned releases? Or are some of these a result of new releases having been chopped at the knees this year?

Todd Anderson said:
I take that back, then ;-)

Mike, are a lot of these classics planned releases? Or are some of these a result of new releases having been chopped at the knees this year?
Click to expand...

Honestly. I'm not sure. It might be a bit of both. Usually these relases take MONTHS to go from paper to production so I'm leaning toward planned. But it might be a mixture of both. Releases that were already slated getting fast tracked

I didn't care for the video transfer myself. A bit to heavy-handed with the DNR and I'm not sure I saw much film grain in the picture at all. I do enjoy the movie a lot though...it's a fun adventure film.

strange, I didn't see much, if any, DNR in that one. Supposedly it's using the same master as the Blu-ray and I don't notice DNR much in that one .... I did notice that film grain was definitely reduced, but I played it off as the Blu-ray showing more NOISE than actual grain