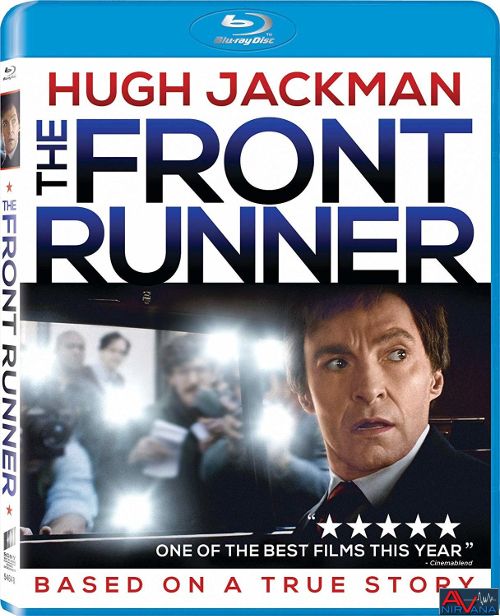 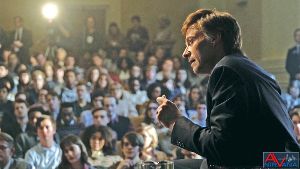 Movie
When The Front Runner was originally announced some months back I was honestly puzzled on WHY this biopic was being made. I mean, it was about a moderately obscure senator from Colorado running for President during the same time as George Bush Sr., and was ousted by Michael Dukakis (who was subsequently thrashed by Bush in the general election) and faded back into obscurity. It just seemed like one of the strangest biopics that could be made in the political arena, as Senator Gary Hart was (and is) a non issue for 99.9% of people outside of a history book. It wasn’t until I saw the film that I really understood WHY this film was being made, and the underlying themes that resonate so heavily today. The movie itself is a solid biopic, and while it is a bit slow at times, that underlying theme (that I’ll delve into in a moment) is really what makes the movie relevant today.

Gary Hart (Hugh Jackman) was the Front Runner back in 1988. He was going up against Bush Sr. on the DNC platform, and by all accounts was THE guy to beat. He was handsome, he had a nice family, he was likable, and he had a fairly centrist political position that appealed to his voting base. Gary was the front runner for his party and it seemed like he was going to be the man to go up against the Republican’s choice of Bush. He had tried for the presidential seat in 1984 against Reagan and lost, but now he was running after the Republicans had held the Presidency for 8 years (after 2 terms of a single party in office, the nation usually swings back and chooses the opposing party’s candidate due to party fatigue) and Hart’s win was promising by all polls. However, this was around the time in the 1980s when media was changing (and not for the better). Journalists were now more interested in hot gossip and personal skeletons in the closet, so when some circumstantial evidence comes to light that Gary might be having an affair, the news stations jumped on it like rabid dogs and systematically end the career of the hopeful presidential candidate. 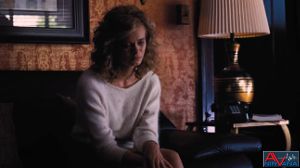 The Front Runner is a sobering film that really takes a look at some of the seedier side of politics and journalism. Seedier sides that are not only common today, but embarrassingly so. Back in the 70s the news channels started seeing a trend. That trend was that “shock” news and negative news got them mega ratings. Slowly but surely over the course of the next 10 years they stopped reporting news like we knew it, but instead turned to shock jock journalism, digging into people’s lives and pasts in order to find dirt that would gain them that shocking headline they wanted. In the 1980s this darker side was getting into full swing. This was pre internet days before everyone new everything in a moment’s twitter bust, but the state of journalism was just as rancid as it is today, and Gary Hart was one of the first victims to this change in journalism. Hart cheated on his wife (or more accurately, she let him) and the media LEPT on that story and ran with it with such abandon that it became everything anyone could talk about. Fast forward a few more years and suddenly Clinton is in the hot seat for the very same thing (although there are much more nuanced details that landed him in that hot seat than Hart’s old skeletons) and now we’re dealing with skeletons in the closet as the ONLY source of news these days. The last two years along have dealt of nothing BUT said skeletons. A person is fired form their jobs for random allegations from 20 years ago, a senator said something off color in today’s political climate back 30 years ago and everyone’s outraged. Somebody slept with somebody else and the news goes CRAZY in a twitter of excitement as they figure out how to make everyone outraged about it. Simply put, it’s a circus, and Gary Hart’s public “execution” was just the beginning of said circus.

The Front Runner doesn’t lionize Gary Hart at all. He’s doing what he does, and his actions are both good and bad. Instead it takes a sobering look at how a politicians actions directly affects his candidacy, even if it’s a completely personal matter. Your life is not your own anymore, and the media will do everything they can to MAKE something come to the forefront, even if the actions you do, or the things you say are from a different version of yourself in the past. Hugh Jackman is fantastic as Gary Hart, a man who is both victim and villain in this play. The rest of the star studded cast (J.K. Simmons, Vera Farmiga, Molly Ephraim, Mark O’Brien, Alfred Molina, Bill Burr) do a great job, but this is really about Gary, and Hugh Jackman completely stands on their shoulders as front and center man.

Some of the best parts of The Front Runner are the audience acting as a guest in a scene. Meaning those scenes where we’re sitting in a press meeting listening to the back and forth conversations of people making decisions (some of which only solidify my loathing for sleazy journalism), as well as Gary Hart’s campaign staff discussing on what needs to be done. However, this type of “fly on the wall” storytelling is also a bit sluggish and slow for a near 2 hour film. The center act drags as everyone figures out what to do, and it doesn’t pick up again until the final 30 minutes when Gary Hart has to confront the situation head on and gives his sobering speech at the end.

Rated R for language including some sexual references 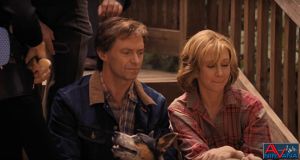 Director Jason Reitman made a very conscious decision to shoot The Front Runner on 35mm film and used a stylized approach to the film to accommodate the 1980s visual style. Colors are a little muted, with an emphasis on earth tones and a textural palette that is stunning to behold. There are some minor issues with banding (most notably in the opening credits) and a little bit of a soft look in some of the darker scenes), but overall this is an incredibly nuanced film. The grain structure is tight and unobtrusive (I sometimes had to look FOR the grain, but once you notice it is incredibly organic and natural looking). Artifacting is near non existent (except for those two instances of banding I mentioned) and the dusty, earthy looking film sports incredible fine detail across the board. 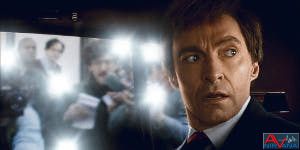 The 5.1 DTS-HD MA track for the biopic is exactly what you would expect for a biopic. It’s good, uses some surround aspects of the 5.1 mix, add in some weight on the low end with music, and focuses the rest of the energy in the front 3 speakers with a generally front heavy track. Yup, you got it right, this is a film that focuses on the dialog and the front sound stage and is accentuated by ambient noises and musical score bits to fill it out into a full 5.1 mix. Said dialog is clean and clear, with no sights of distortion or imbalance. The tense score has nice drum beats and pounding percussion instruments to fill out the surround channels and the same with the bass. There’s a few moments of activity such as when a plane takes off and lands (as well as the turbulence on said plane) but first and foremost this is a dramatic film. The weight is in the front of the room and everything else is ambient support. It’s a solid track and one that does well with what ever it is given, but one that is still most DEFINITELY a dramatic mix.

The Front Runner is a middle of the road biopic about an obscure senator from Colorado, but what it stand out is the relevant themes regarding today’s run for political office and the media hell storm that follows it. In fact, it’s eerily accurate to what we deal with today and a bitter pill to swallow if you think about it critically. The mediocre storytelling and sluggish nature of the film keeps it from being truly great though, and as such is a solid film to watch, but not one that will wow and shock the academy awards. Sony does a fantastic job with the Blu-ray with the only weak technical specs being the mild extras. The Front Runner may not sweep the awards ceremonies, but it is solid political biopic with a somber message that is well worth watching.

Hmmm... I don't remember this one hitting the theaters at all. Might wait for this one to hit TBS. ;-)

Thanks for the review. I remember his run for the presidency and the scandal. If only he ran today, there wouldn't have been any issues, lol.

Candidates who ran for the presidency many years later were much worse, got the chance to go the distance and then some. lol.

Will check it out on amazon prime/netflix once available.