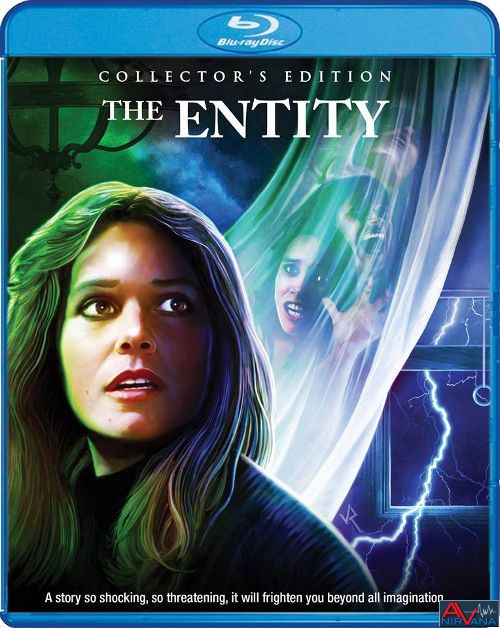 Movie
The Entity was one of the few movies as a kid that truly TERRIFIED me. Growing up with 2 older brothers I was subjected to all sorts of horror films at a young age, so by the time I was 7 or 8 very few things actually scared me. I can still remember sitting down on our 13 inch Goldstar TV and watching the VHS of The Entity and having to hide behind the chairs at times while my older brothers laughed at my discomfort. Looking back on it I think it was the premise of the movie and how it was depicted on screen. Ghost stories were all over the 80s screens and The Exorcist was considered the great of it’s time. However, there’s something about the absolute terror in Barbara Hershey’s eyes throughout the film, and the uneasy nature of the story combined with harsh synthetic tones in the score made it particularly disturbing to young Mike. Over 20 years later the movie still leaves me with an uneasy feeling in the pit of my stomach, and the realization that it wasn’t as great as my brothers had made it out to be.

Supposedly based upon true events from a woman back in 1976, The Entity tells the story of a woman being viciously assaulted by an invisible entity. The movie jumps in right at that point, literally just introducing us to Carla Moran (Barbara Hershey) and her three children, only for her to be suddenly attacked out of nowhere by an unseen force. Terrified at being assaulted, but confused by no one being around, Carla goes to her friend and tries to shake it off, but the unseen “entity” has other plans. Returning multiple times it begins to terrorize the poor mother mercilessly. Admitting to her psychologist that the assaults are sexual in nature (most of it is merely hinted at physically until the final attack), the Doctor Phil Sneiderman (Ron Silver, most notable in my memory for playing the villain in Van Damme’s Timecop) puts her under psychiatric care, refusing to believe that something not seen by the naked eye is torturing her.

As the being returns again Carla realizes that Dr. Sneiderman isn’t going to listen to her. Gaining the aid of a group of Parapsychologists (basically ghost hunters), she devises a way to trap and get rid of the spirit before it can do her or anyone else any harm. However, the spirit/entity/thing is cagier than it looks and it doesn’t WANT to be caught. Not to mention that Dr. Sneiderman believes that the parapsychologists are doing more harm than good to Carla, and is making it his mission to stop them before she suffers any psychological harm (more than she already has) from what he considers charlatans.

Taken from a true story (or at least true account), The Entity is a very disturbing, but rather uneven film. It seems to hybridize the late 1970s supernatural ghost films with the shooting style of the 1980s. The film really is rather unnerving to watch, especially when Carla gets thrown around like a rag doll by the entity. It’s not graphic or wildly excessive like so many other 80s films, but it’s more the IDEA of being tortured and assaulted by an invisible force that has no seeming motive that disturbs more than anything. Which brings me to another point. The entity itself. It seems to have no apparent motive for its actions, and while we never see or hear it (except for one small moment near the end), if you look back and objectively look at the motivations it seems almost silly.

There are some fantastic optical effects and use of split screen camera work to make some incredible shots. There’s a really neat scene where the Dr. is in the background talking to Carla, and Carla is in the foreground, and the use of split screen makes it seem like there is this huge layer of depth to the image that normal cinematography couldn’t convey. As neat as that is, the story is a bit overlong (over 2 hours for an 80s horror movie) and the acting is your typical 80s horror acting (meaning very rocky to say the least). The movie is entertaining enough as a horror fanatic, but I’ve always been a bit unnerved by the film and in reality, it’s just an average 80s horror flick at heart.

Rated R By The MPAA

According to my sources Scream Factory didn’t remaster or restore the film at all, but this seems to be taken from a newer master than the older 2012 Anchor Bay release was. That particular release suffered form quite a few artifacts and an older master, and while I can’t be certain that the master is newer, at least the encode is a good step above the Anchor Bay release. The detail levels range from good to fantastic, with some scenes looking a bit smooth and soft from the split screen techniques, while others are absolutely jaw dropping (the scene where Dr. Sneiderman gets in Carla’s face at the experiment is incredibly revealing. You can see his individual bear hears and even the razor marks where he trimmed around it). However, there is some black crush prominent throughout the film, and the grain levels change depending on the scene. Grain is never obtrusive, but it’s a bit uneven and you can notice the changes. The colors are warm and slightly burnished, with that typical 80s “look” that features orangey reds and pinkish skin tones. It’s a good transfer, and a definite improvement over the Anchor Bay release, but still a bit dated as some touchup work would have been nice.

Scream Factory has given us the typical 5.1 DTS-HD MA, a 4.1 DTS-HD MA track as well as a downmixed 2.0 track for night listening in DTS-HD MA as well. Naturally the 5.1 mix is the superior of the three, with the 4.1 mix being a close second . The track is LOUD as all get out, and features a particularly harsh score that uses discordant tones when the entity is about to attack. The mids are good, and the vocals well defined, with strong highs and a decent amount of bass as well. According to Scream Factory, this was a newly mastered audio mix (thank goodness, the Anchor Bay one was really bad) taken from the original 6 channel negatve, and it sounds superb for considering the movie style and the age. It’s not perfect, but it is an excellent mix that is very atmospheric, and one of the key features in the movie for mood setting.

​
The Entity rises above many other films of that era, and crafts a movie that really is terrifying if you think about it. The film is straight forward, clean, and completely brutal to the end and makes for a very tough watch at times. However, it still is mired down by many of the 80s cliches and a lack of decent acting outside of Barbara Hershey and Ron Silver. I remember being terrified as a little kid, enthralled by the creepiness as a teenager, but really seeing many of it’s flaws as an adult. It’s a solid enough genre film for horror fans, and the Blu-ray is light years ahead of any release so far, so fans of the film will want to grab it for sure. However, it’s one of those movies that really appeals to the supernatural horror fanatics, as it is not one of the best, and not “so bad it’s great” either. It just “is”, not to mention it's a movie I'd be hesitant to blind by just due to the maturity of some of the themes. Scream Factory should be commended for cleaning this one up though, as the Anchor Bay Blu-ray release was abysmal and this is a solid leap forward in quality.

Thanks for the review. Never saw this so will check it out once available on amazon prime/netflix.

I love this movie. I remember watching it over and over back in the 80's. I will buy this one but I am disappointed that Scream Factory did not remaster the film.

Asere said:
I love this movie. I remember watching it over and over back in the 80's. I will buy this one but I am disappointed that Scream Factory did not remaster the film.
Click to expand...

on that it depends on the studio who gives it to them. Sometimes they're allowed to rescan/remaster it, other times they have to work with what they've got. From what I've heard form industry sources, they were given the master and told "this is what you got", so I can't complain too much. It still looks really good.

I really liked the sound when the entity took over. Really eerie.

Asere said:
I really liked the sound when the entity took over. Really eerie.
Click to expand...

haha, yea that really harsh/discordent "dant dant dant!!!" was creepy as all getout

Michael are you by chance going to review Us?

Michael Scott said:
I should be
Click to expand...

Well I bought it and now I just need to find some time to watch it lol.